My friend Jan Hope, having amassed a large quantity of 15mm Mexican America War figures, decided to run a game with Brian and I this last week. We had a great time and Jan wrote up the following battle report!


This game was the first face-to-face two-player game with Jan’s Mexican-American War miniatures collection culminating a three-year project to bring these magnificent troops to the battlefield!  I purchased the mostly unpainted collection from Eric in 2014 and sent the unpainted figures to Fernando in Sri Lanka in two batches for painting.  Eric had painted the American artillery and the Mexican Grenadiers and Fernando painted all the rest of the collection that numbers about 2,000 figures altogether!  The figures are magnificent!  I still need to add the flags and flock the bases, but after two solo play-tests, the troops were eager to take the field in a real game with experienced Piquet players, so we went all in beginning with Palo Alto, and what a baptism of fire it was!!

Game rules were generally in accordance with Piquet-Hallowed Ground with a few house rules.  Game was set-up with historical deployment per the book “On the Prairie of Palo Alto.”  The Mexican 4th Line infantry regiment was substantially larger than other regiments in the battle, and rather than add stands to that regiment, the 11th Line Regiment was included in the Mexican order of battle, because they look great on the table with their white jackets and red trousers!

Army characteristics and unit values were rolled up before the battle, and unit cards were used for each unit (the astute observer will see a unit card for the American 7th Regiment and wonder why not the 5th as per the historical order of battle, and that’s because I had printed cards for the 7th but not the 5th so I used what I had …).


Unit count and Card Divisor resulted in four randomly drawn Morale Chip cards for each army, with the Mexican army at 19 Morale Chips and the American army at 17 Morale Chips.  Sequence Deck was per Hallowed Ground, except that the Mexican army begins with four Dress Line cards rather than eight, and the Mexican army deck includes the Native Mobility card that acts as an extra Cavalry Move card for the Torrejon cavalry group.  With these adjustments the Mexican army deck included 23 cards and the American deck included 27 cards.  The army commanders were both average so no cards were added for them.  In the historical battle, the Canales brigade of irregular cavalry was in the area but did not appear on the battlefield.  Provision is made in the scenario description for the Mexican army commander to “Assert Command” and rally the two-regiment Canales cavalry brigade onto the table when Officer Check cards appear.


Eric prepared a wonderful terrain table top very evocative of the prairie of Palo Alto, and with the units deployed we were ready for action! 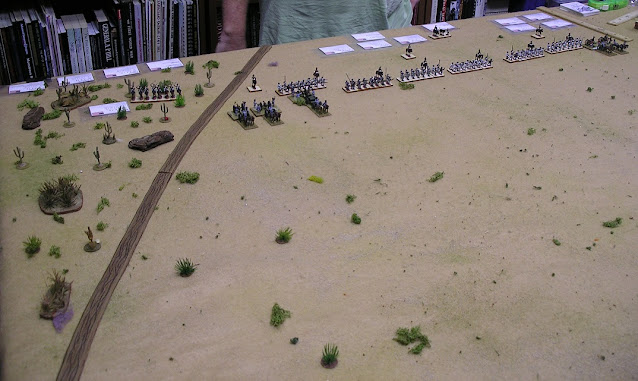 The American lines looking from the south, with the 2nd Dragoons on the American right (left side of photo) and Duncan’s elite horse artillery battery on the American left.  Each infantry regiment has a mounted officer whose functions are first of all to look great on the table, and second is as an indicator of First Fire bonus, with the officer removed upon first fire. 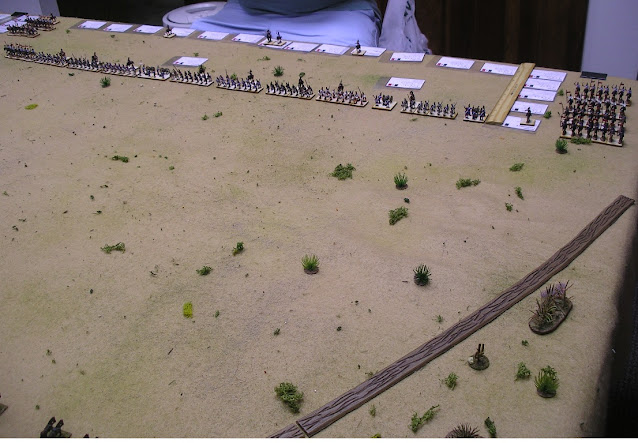 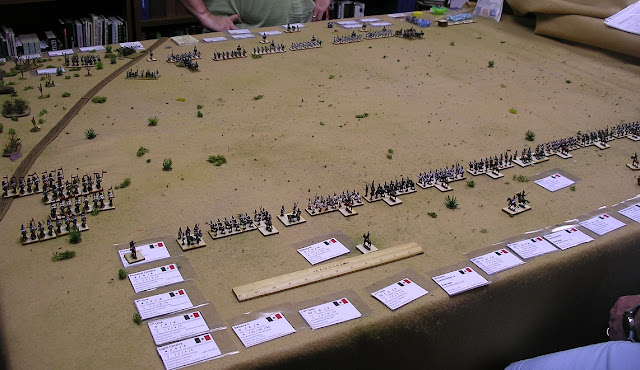 The Mexican advance begins with a Cavalry Move card and Torrejon’s brigade moves toward the 2nd Dragoons.  The American light artillery battery on their right has unlimbered. 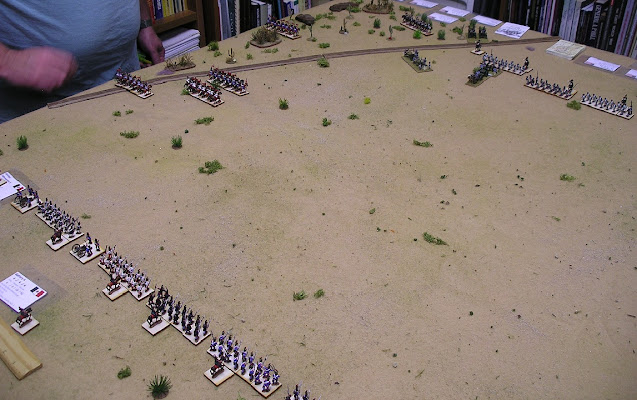 Torrejon aggressively and courageously makes an heroic advance on their bonus move card pushing the Presidial regiment of light cavalry well into the flank of the American position! 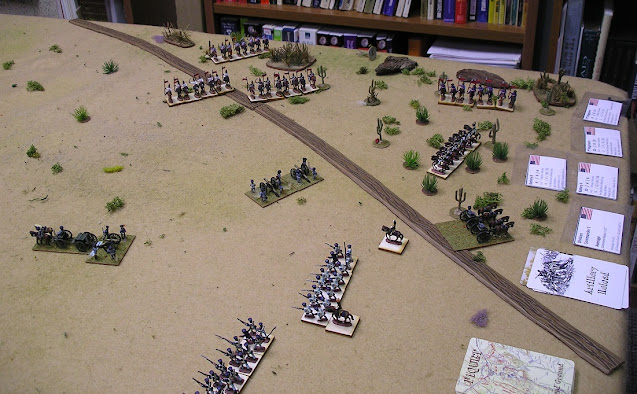 Another Cavalry move card with an advance maneuver puts the Presidials on the flank of the 2nd Dragoons! 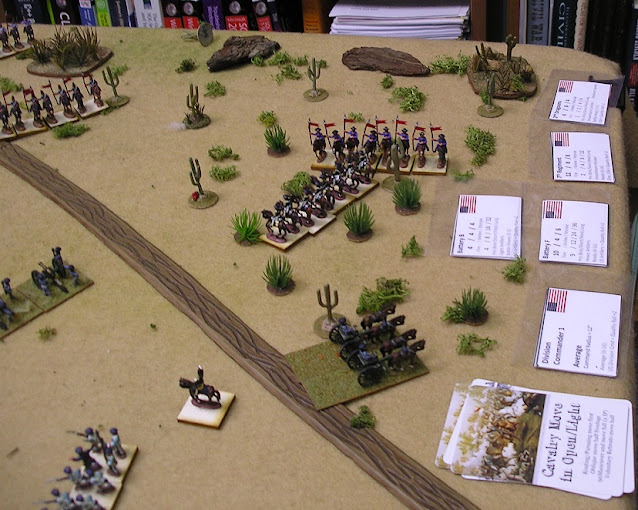 The Presidials make an opportunity charge into the flank of the 2nd Dragoons!  The 2nd Dragoons had been heavily employed in scouting before the battle and were in a Battle Weary condition.  The normally low effective light Presidials gained significant advantage from the flank attack, so it looked grim for the Dragoons, and if they folded the whole American right would have been exposed! 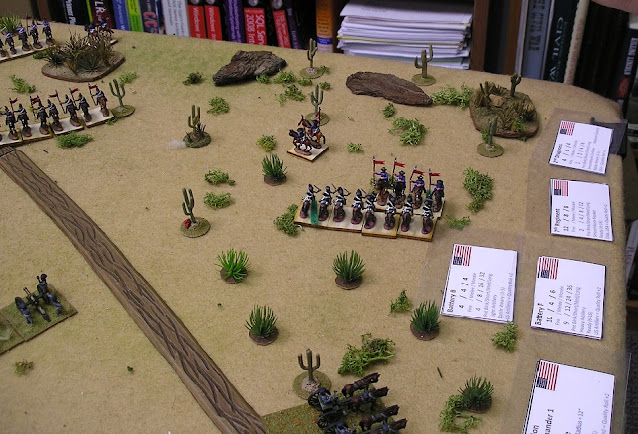 The dice went down D10 to D4, and it was 3 to3 … a tie and a narrow victory for the battle weary Dragoons!!!  The medium weight Dragoons turned and faced the Presidials and won the next round routing the light regiment!  This was an early and decisive engagement holding the right side of the American line that might have been rolled up in flank attacks!  A heroic moment early in the battle! 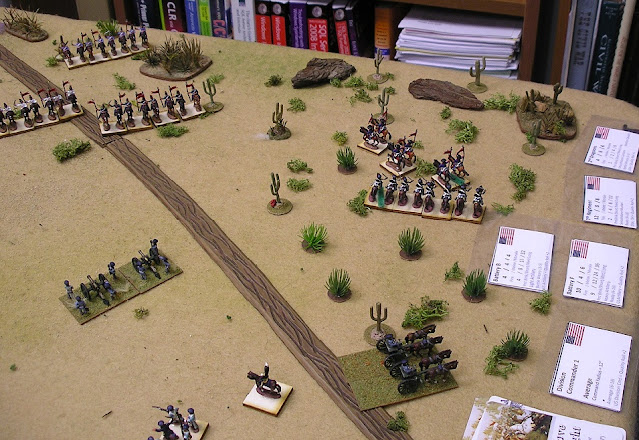 Meanwhile over on the American left, Montero’s regiment Villas del Norte is advancing on the guns of Duncan’s elite light horse artillery battery, who rolled up Determined. 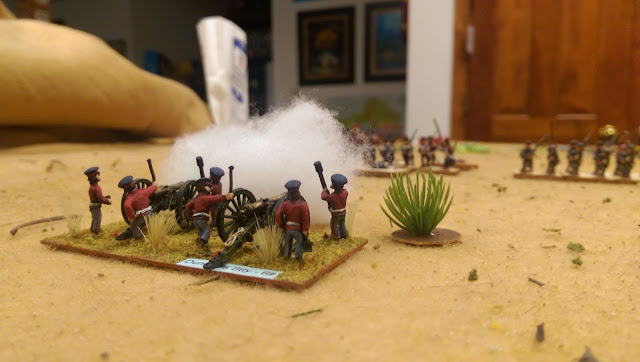 Determined or not, they fired three times at medium range without effect, then finally on the fourth Artillery reload card over two turns, they rolled 11 to 2 for nine hits wiping out the Villas del Norte!

The American line advances toward the Mexicans.  Over on the far right of the American line, the battle weary light battery has fired on the Mexican 8th Line cavalry and with very accurate shooting on diminished capability has routed the 8th who are fleeing the field unralliable!  The first turn saw a preponderance of impetus to the Americans, but this was reversed on Turn 2 when the Mexican cards ran out leaving 19 unplayed American cards!  Such is the ebb and flow of Piquet!

The Americans continue to advance while the Torrejon’s two remaining regiments fall back to a defensive position anchoring the flank.

The Americans advance further, General Taylor along with his scout are coming up behind.

Both infantry lines are advancing for the final showdown.  The Zapadores have moved into the casualty field from the Villas del Norte ill-fated advance.

The Zapadores charge into the guns, but can’t quite reach melee contact, but they volley with Ragged Fire in effect, D10 to D6, and rolled 1 to 5, no effect!  Duncan’s elite returns fire with canister D12+2 and the roll is …. 1!!!  No effect!

Morale check against Zapadores cause them to fall back slightly.  The Zapadores fire on a Musket Reload, D10 to D6, dice roll 6 to 5, Duncan’s battery passes the morale check and holds in place.  The American 8th Line regiment and the 2nd Artillery as Infantry move up against the Mexican 2nd Light regiment and the Tampico Coast Guard.  The 2nd Light opportunity fire volley has no effect.

Meanwhile farther to the right, the advancing Americans came under opportunity volley fire, the 4th Line regiment, the best infantry regiment on the field that day, took 1 stand loss and the morale check against the D12 morale die resulted in a rout!!  The 4th Line is seen here routing in the direction of General Taylor, the combat artist looking elsewhere missed the smoking muskets in the Mexican lines.

The artist redrawing the scene from second hand accounts shows the Mexican 1st Line regiment having fired to rout the American 4th Line.  Also seen here, the American 8th Line regiment on the left and the 2nd Artillery as Infantry to the immediate right are about to fire on the Mexican 2nd Light and the Tampico Coast Guard regiments.

The American 8th fires heroically into the 2nd Light, one of Mexico’s best regiments, causing one stand loss, but the 2nd passes the morale check and holds their position.  The American 2nd Artillery as Infantry fires into the Tampico Coast Guard, also causing one stand loss, but the lower morale Tampico’s rout and are seen near their brigade commander who will attempt to rally them with an officer check.


Next to the valiant Zapadores, the Mexican 2nd Light regiment charges into contact with the American 8th Line, the 8th volleys and causes two stand losses on the courageous 2nd Light.

With the Morale Chip losses from those volleys, the Mexican army morale was exhausted, and they conceded the field to the superior firepower and morale of the American forces.  General Arista will pull the Mexican army back in good order to take up a defensive position at Resaca de la Palma to stop General Taylor’s American army from their continuing advance to relieve the siege of Fort Texas opposite Matamoros on the Rio Grande.  A battle for another day!

It was a grand first battle for my Mexican-American War collection and I am most grateful to Eric and Brian for going at it hammer and tongs bringing my project to the table at long last!  There was a lot of ebb and flow with the strong narrative that we so enjoy in playing classic Piquet!  We’re looking forward to many more exciting MAW campaigns and battles in the Charlotte Garrison in the months ahead!
Posted by Eric Burgess at 5:03 PM 3 comments