Well, I'm extremely excited that my wargaming rules are officially available to be purchased.

Link to the Piquet site: 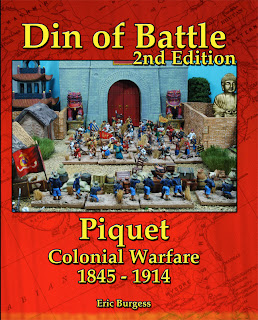 Klash in the Kashmir - World at War Scenarios

Although, I love playing with miniatures, I cut my teeth on board games. I have recently, within the last year, fell in love with a series of games from Lock 'n' Load Publishing called World at War. I have all the products in the series, and I'm constantly looking for new ground in the series.

A good fellow named Sava, has made some add on counters for the game covering Indian and Pakistan troops from the mid-80s. I have taken his counters and have started to make some scenarios with them.

Klash in the Kashmir is my title for the set of scenarios I'm currently working on. The first of five scenarios in the set is called "Kashmir on Fire", which is the first strike moves made by the Indian army against the Pakistanis. Some of the later scenarios will see some unusual twists in the game.

The first playtest went well and wanted to share some of the photos with you. 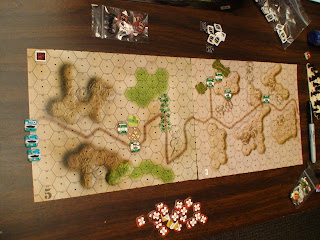 Pakistanis must deploy in depth, garrisoning the two towns on the map (one on each map) and have a patrol near the final exit point. 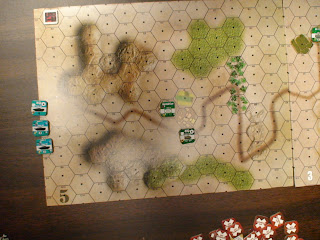 Indians start with the initiative and drop HE rounds on the closest town and soften up the enemy, knocking out a Pakistani M113. Pakistani infantry scatter for cover! 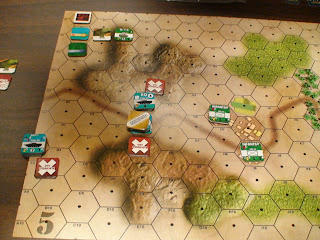 Pakistanit HQ is running for the second line of defense. (in the center of the picture below with an Ops complete marker on him) 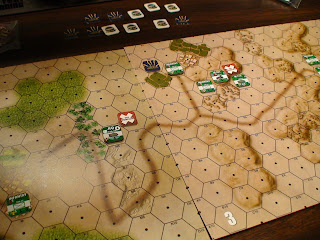 Turn 2 sees the Indians attempting to bybass the first town, knowning that follow-up units will mop up the remaining Pakistanis. One BMP-1 is distrupted by long range fire from the Pakistani M-901 ATGM. 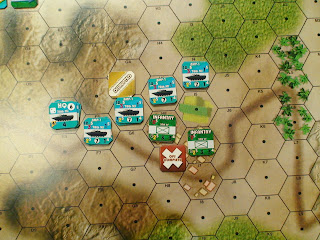 Turn 3 sees most of the Indians bypass the town, but two platoons of BMP-1 loaded with infantry start fighting it out at close range with the Pakistanis. One Pakistani infantry platoon is distrupted. 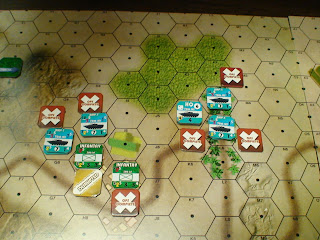 M-901 can be seen at the top of the hill with an Opps Complete marker on him. 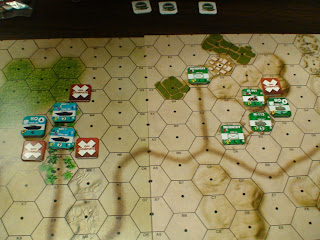 Turn 4 ends without either side moving. Turn five sees the Indians around the 1st town getting pinned down, while the rest of the command pushes on, taking pot-shots as they move. 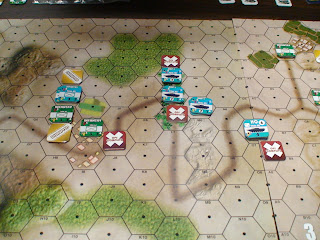 Close up of Turn 5 around the second town. M-901 has been disrupted and the Indian 78th HQ is leading from the front to get better line of sight to the targets. 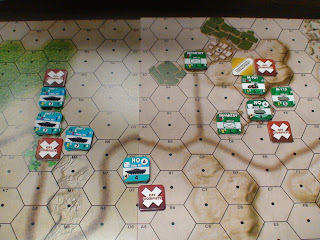 Turn 6: Indian 78th goes first and drops HE on the closest infantry unit which disrupts the unit. Then they drop smoke on the same location (see below). They then sprint around the mess, hoping to put some distance between them and the enemy. 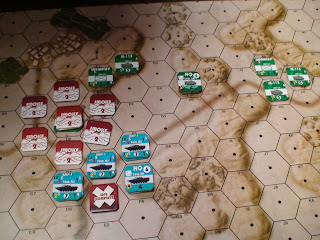 Meanwhile the Indian infantry has dismounted, but took casualties. Both BMP and infantry are now disrupted by the spirited Pakistani defense. 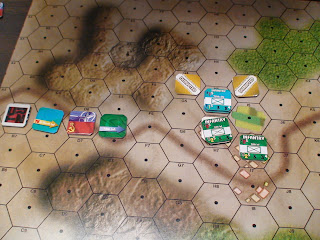 Turn 7: Pakistanis drop HE directly in the bunched up BMPs of the 78th Mech!! This completely changes the complextion of the battle. Two of the four remaining BMP platoons are distrupted. 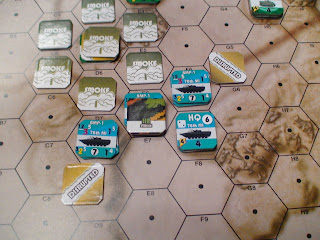 Pakistanis come out from the smoke and assault the rear of the Indian APC column destroying the BMP1 and their riders! 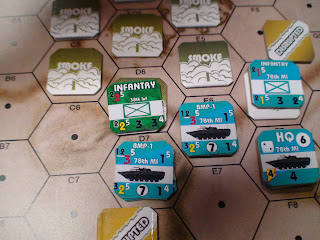 Another Pakistani infantry unit attempts to move forward only to be pinned down by the HQ and his attached BMP platoon. The M-901 shreds another BMP (wreck marker). 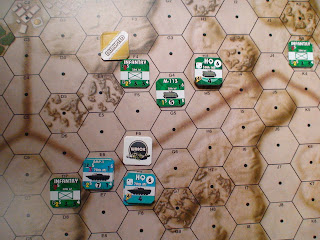 Turn 9: Indian infantry dismount and assault the M-901 destroying it, and driving back a platoon of M113, but their objective is too far and nearly all the Indian units have been shattered. 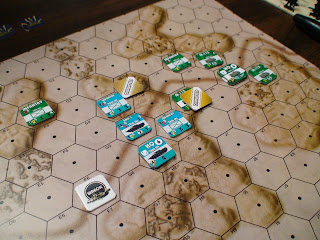 For my first scenario, this went pretty well. I think 10 turns is about right, but the Indians need to push harder as there is very little that can stop them at a distance except the M-901. Feedback welcome!
Posted by Eric Burgess at 11:24 PM 4 comments