We refought Lundy's Lane twice over the last two weeks. This is a very small battle in terms of the number of soldiers involved (less than 4000 a side), but was a pivot battle in the War of 1812 between the United States and Britain.

I only took a few photos as I was playing in both games for a change.

These figures are 18mm figures from Brian's new 1812 collect. It was great to see some different troops on the board (uniforms etc) than we normally see here at my house. Thanks to Brian for the work put into painting the figures and running the game.

We used Piquet for the rules as usual, and had a ton of fun. The first battle was a massive British victory with the American reinforcements unable to turn the tide, while the second game after some adjustments was a clear cut US victory.

Terrain was minimal, with woods on the US right, a cross roads, and some small buildings that played no part in combat or line of sight.

The US army needs to go back to the drill field. They were just out-right terrible in this one. The only good thing for the US was my light guns actually were devastating to the British\Canadians which is very unusual in Piquet games. Otherwise the Brits stomped on the US in every other facet of the battle. They sent Scott's brigade packing and slit the US line right in the center and rolled up the units on each flank of the breach.

Jasper's 25th US Regiment attempting to outflank the British by moving along a trail. They ended up being lost the entire battle and never got into the battle. 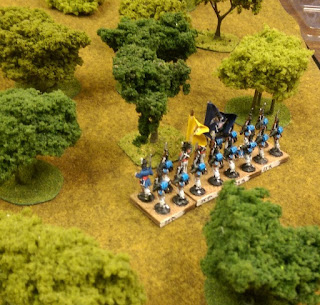 My US Light 6# artillery battery just before being overrun. Uggh. At least it represented the US well up until that point in time. 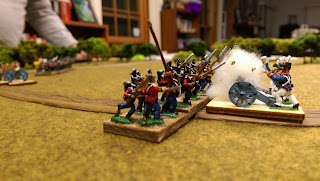 View of the battle from the US side. This two British regiments in the center are about to burst through the US lines roll them up. US reinforcements heading up the road in hopes of  turning the tide. 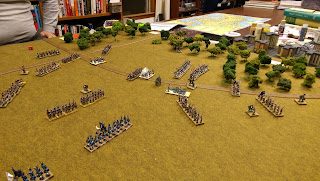 We made some tweaks in this game with the forces starting closer together, the actual playable area reduced (US reinforcements arrive closer to the action), reinforcements arrive on a Stratagem Card rather than an exact turn. When the card is turned the move onto the table one full move. Scott was rated a Brilliant Brigade Leader and was given a Brilliant Leader card (wild card). Because of the weird nature of this battle, Brian is using Field of Battle "rally UI" on an Office Check card.

Overall the changes were really good and will lend itself to a great intro to Piquet.

Paul was a great addition to the Charlotte Garrison, bringing in free die rolling success to the USA side in this one. The US army fought and moved like clockwork in this game constantly out-maneuvering the Brits.

In this game the British actually advanced against Scott's brigade to see if they could damage the Americans early, only to run into a buzz saw. 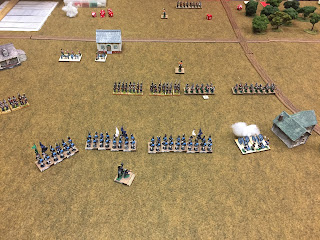 British regulars seem unphased by it all. 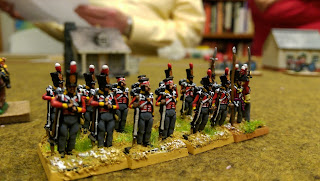 Two Canadian trained militia units are routed by the fire of my light guns! 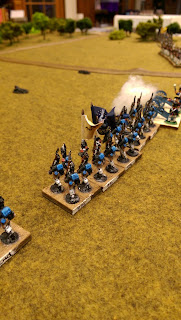 We fired our guns but the British kept-a-comin' 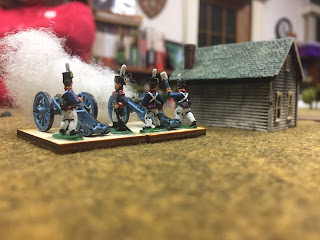 British regulars are still unmoved by their allies routing. 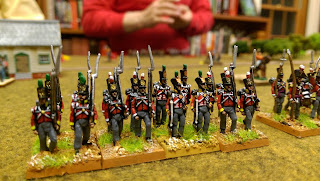 Overview of the battle as Jan tries to slip around my flank. You can see the US 2nd Brigade deployed on the right with no British reinforcements in site. 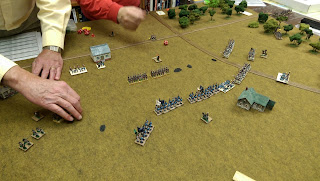 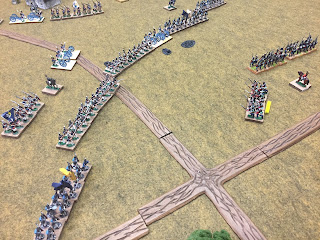 Some raw Canadian conscripts and a rallied Canadian trained militia attempt to hold off the American right hook. 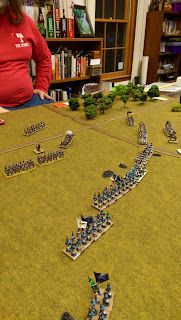 One of the big battalions of American regulars. Pretty white pants. :-) 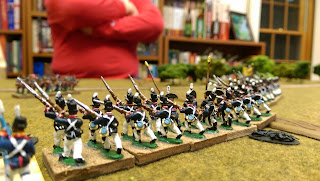 The US regulars collide and rout the militia just as British reinforcements arrive on the table, right were Phil and his red shirt is located. Too little, too late. Americans have crushed the British in this battle. Sorry for the lack of photo history as I was playing and not umpiring this one. 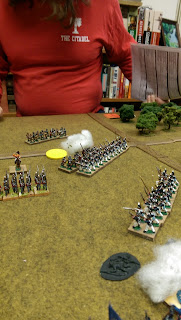 Brian is thinking of making this a game to run at Historicon 2017 with 2 players a side. I'm sure we will play this a couple more times to tweak the rules for the convention game.