Finially have some time to post some after-thoughts about Historicon 2012.

Venue - I really like the new venue because of several factors.
1. I liked having a massive room where most of the games were being played, and the side rooms were all in the same building. No more laying out bread crums to find your way back to the main hall.
2. Dealer area in the same building as gaming. Saves lots of time going from the main hall to the dealer area when it is 50 steps away.
3. Then entire convention is in one location so you don't have to go outside to find another game or dealer area. This was a big plus because it was about 100 degrees on the first day or two.
4. Flea Market - although I didn't buy much this convention, I liked that you could drive around the back of the convention center and drop off your goodies without much trouble or having to haul the figures a great distance.

Shot of the main gaming hall. It was HUGE! This is only showing the back half of the area. 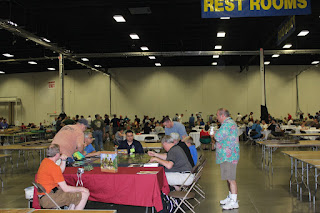 Gaming
I thought there were tons of great looking games and the variety was outstanding.
I ran two games in one day, Thursday, and I don't think I will do that again. It was just too much work, even with the games being on the same table. By mid-night on Thursday I was exhausted and my voice was gone. Took all day Friday to recover, but by Friday night I was ready to go again! Only played in one game (ran two) and it was a FPW pick-up game using Field of Battle rules. Tim's figures were outstanding, and the scenario was good enough for a pickup game. I would definitely enjoy playing that period again. Tim's figures nearly made me want to collect the Franco-Prussian War. My motto of "no new periods" was intact after the convention.

My Games
Overall I was pleased with the games I ran and really happy with the Puebla terrain. In each of my games I had one side that just couldn't roll well to save their life. Not much you can do about that, but the players still seems to have a good time, which is what matters most.

Photo of my Puebla game, with the initial setup shown.

Zouaves assault the fortress of Guadalupe: 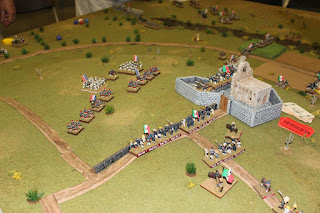 Every college kid and young American will be happy to know they can still celebrate Cinco de Mayo, even if the Mexicans don't!

Some shots from the second game: the Battle of San Isabel.

Main assault on San Isabel by the Imperial Mexican forces: 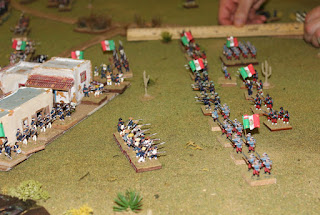 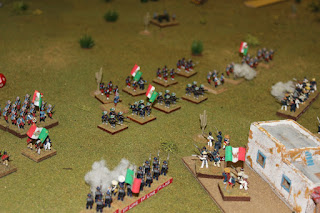 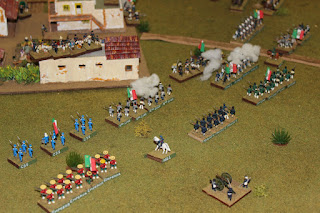 The Imperial Mexican won the game and successfully destroyed the Republican supply train.

I think the best part of Historicon is seeing all my friends from around the world. I'll definitely be going back next year. Already have my room reserved!