by
Eric Burgess
Archon 2nd Edition was finished in 2001 and covers warfare from 1700 BC to around 1200 AD.  Below is a list of Campaign Musters that allow you to refight any of the conflicts list. Rules are also given to allow you to create your own campaign musters! This website contains errata for the rules also.
Guals Stand Ready by Vezio Orazi. (15mm) 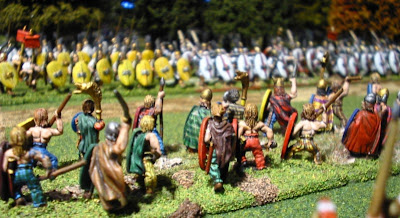 Add the following clarification to the Pursuit Rules - section 9.4 - clarifications in blue.
If the unit does not pursue it holds its ground. These victorious non-pursuing units are unformed (section 7.34) and out-of-command after melee. Per section 7.34, if the unit was unformed prior to the melee starting the unit is unformed a second time which means it is now disordered and loses a morale chip.
If the unit does pursue then it is marked as disordered and makes an immediate half move towards the defeated enemy unit. If the unit was previously disordered then it remains disordered. The unit may ...


Change the current #2 pursuit rule (section 9.4) to the following text:

2. Another unrouted enemy unit is within 1/2 move distance and in the unit's standard Piquet beaten zone or there is an enemy unit within 1 inch in any other direction. At least half the enemy unit must be within the beaten zone in order to count for this exception. This is half the movement rate of the checking unit, not the enemy unit.

Wars of the Diadochi Campaign Muster has all the rating adjustments missing. They are included here for your use. Please either print this information out or directly put the adjustments in your copy of Archon. I apologize that these didn't make it into the rules.
Wars of the Diadochi Army Rating Tables
Eumenes and Antigonid EmpiresMacedonian Phalangists - NA UP2 UP1
Mercenary Phalangists - NA UP1 NC
Asian Phalangists (Pantodapoi) - NA UP1 NC
Argyraspides “Silver Shields” - NA UP3 UP2
Peltasts - UP1 UP1 NC
Bowmen - UP1 DN2 DN1
Javelinmen - UP1 DN1 DN1
Bodyguard “Agema” - NA UP4 UP2
Companions - NA UP3 UP1
Light Cavalry - NC DN1 NC
Horse Archers - NC DN3 DN1
Elephants - UP1 UP1 DN1


Orri's Storm: The Battle of Stamford Bridge
A scenario for Piquet's Archon II
by Ken Blackley
Historical Overview
In the fall of 1066, the near-legendary Norwegian king Harald Hardrada invaded England with a huge fleet of 300 ships. With him came Tostig Godwinson, (the English King Harold's brother), who was the former English Earl of Northumbria. Tostig had been forced out of his earldom by his brother and came seeking its return under a Norwegian king.
The fleet sailed up the River Humber to a small village just south of York at Riccall. The army disembarked and marched on York, meeting and defeating the army of the northern earls at a small village called Gate Fulford. But the victorious Norwegians didn't continue to York. Fearing a massacre, some of the city's leading citizens offered to join Hardrada as hostages. They agreed to submit to the Vikings at Stamford Bridge - a point 12 miles east from York and 19 miles from the Viking fleet at Riccall.
Meanwhile, in the south, King Harold of England had been waiting all summer for an expected invasion by Duke William of Normandy, and was caught by surprise by Hardrada's invasion in the north. Gambling it was too late in season for the Normans to still invade, the English king force-marched his housecarls north at amazing speed and reached York in just five days. Upon arriving, he learned of the plan to give the Vikings hostages on the next day. Harold saw his chance. The next morning it was the English royal army and not citizen hostages that left York for the meeting at Stamford Bridge.

Hardrada took one-third of his army with him to the meeting, leaving the rest with Eyestein Orri to guard the moored fleet. It was a hot autumn day, and most of the Norwegians left their armor at Riccall and seemed to treat the trip to Stamford Bridge as a holiday. In fact, the army was relaxing on both sides of the River Derwent when they saw the English army advancing on them.

Despite being caught completely by surprise, Hardrada wasted no time. He ordered his men on the north (Saxon) side of the river to defend the bridge, while the main body formed up under Hardrada's "Land Ravager" banner on the low hills to the south of the river. Hardrada also sent messengers to Riccall ordering Orri to bring up the rest of the army as fast as possible.

The Saxons advanced like a wall of steel. They pushed the delaying force into the river, crossed the river and slowly beat back the unarmoured Vikings on the south side in a long and vicious struggle. Hardrada and Tostig where both dead by the time Eyestein Orri arrived to take the Land Ravager. But Orri's exhausted reinforcements, seized by the battle-madness, threw off their armour and waded into the slaughter in a ferocious bloodletting known forever after as Orri's Storm.

Twice in the battle Harold called upon the Vikings to surrender; twice they refused, fighting berserkly for far beyond what could be reasonably expected of any army. But the result was never in doubt; and when the slaughter finally ended the survivors only needed 24 ships out of 300 to return home.

As for King Harold of England, his victory was short-lived. While in the north, Duke William of Normandy had invaded in the south. Harold force-marched his housecarls back south to meet the Normans and his own death at the Battle of Hastings.

Terrain
Place the River Derwent running east-west and bisecting the centre the table with Stamford Bridge crossing it in the middle. There is a ridge of low hills beginning about twelve inches to the south of the bridge. An old Roman road runs north to south crossing the Derwent at the bridge. Small copses of trees, low hills etc can be added as needed for interest.

Viking Order of Battle
All units are as described on page 193 of Archon II except where noted.

· One unit of Archers (Regular)

· One unit of English/Flemings (see below)

· The four units on the north side of the river are expected to be lost. As such, they lose no morale chips in combat! They are also permanently out-of-command.

· All units wear no armour.

· These three berserker units from Riccall units have run from their ships and are exhausted. As such, their melee adjustment is NC instead of UP3.

· The unit of English/Flemings has the same stats as a Fyrd unit except without darts. Tostig Godwinson is attached to this unit, and deploys with them (see below).

Saxon Order of Battle
All units are as described on page 193 of Archon II.

· One unit of archers

Deployment and Scenario Rules
In order to recreate this battle as a war game, it must be separated into two distinct sections: the Delaying Battle and Orrii's Storm.

The Delaying Battle
The game begins with the Viking player deploying the following units:

· The four north-bank units. These may be placed anywhere north of the River Derwent.

· One unit of Housecarls, with Harald Hardrada attached. This unit can be placed anywhere south of the River Derwent, but not within 12 inches of the bridge. Note that the remaining seven units of the south bank force are not placed on the table yet, as they are as yet too dispersed.

The Saxon player then deploys his entire army on the north side of the river, but not within eighteen inches of the river. Harold Godwinson and the two sub-commanders are each attached to their own unit of housecarls.

The following special rules are in effect for the delaying battle:

· The Viking north bank units are expected to be destroyed. As such NO morale chips are ever lost by them, no matter what the situation!

· A special card, Viking Reinforcement, is added to the Viking deck. Upon each appearance, the Viking player may place 1d4 (player's choice as to which units are taken, and in what order) of the remaining units of the south-bank force anywhere south of the River Derwent not within 12 inches of the bridge. These units are disordered when deployed, but can be rallied as normal under a Leader Check card.

· No Viking units south of the Derwent may be moved, although disordered units may be rallied.

Orri's Storm
As soon as any Saxon unit contacts the bridge, the river is crossed. Play immediately stops, and all Viking units remaining on the north side of the river are removed from play. Any Viking south-bank units that have not yet been placed are considered too dispersed to be reformed and are considered lost (note that no loss in chips is incurred for this).

The Saxon player now redeploys his entire army on the south side of the bridge, within three inches of the river.

Other special rules
Viking Morale
In the actual battle, the Vikings fought long after they logically should have broken. To reflect this, the Viking army NEVER adds the Major Morale Card in their deck.

The Land Ravager
Harald Hardrada's banner, called " The Land Ravager" was considered magical and supposedly guaranteed its wielder victory. As such any leader carrying the flag is considered a Hero. At game's start, Harald carries the banner and is rated a Hero. Should be die, Tostig Godwinson takes up the banner and is immediately rated a hero. Should be die, Eyestein Orri picks up the flag and is rated a Hero.

Command Structure
Both armies have a C-in-C and two sub-generals. As such, the C-in-C may lead his own command group, but becomes vulnerable to officer survival checks under the Leader Check Card. The exact command structure of each army is up to the players.

The Viking at the Bridge
Some sources for the battle claim that a single Norse huscarl held the bridge singlehandedly for some time after the east bank force had been crushed. Supposedly this hero took on all comers until he was finally killed by a spearthrust from below the bridge, allowing the Saxon army to cross.


Here's how to include this legendary bit of fluff into the scenario.

· Deploy the Saxon army no closer than nine inches from the bridge, rather than the 18 inches specified above.

· When the first saxon unit contacts the bridge, place a single Viking figures on it, the fiercer looking the better. This Arnold Schwartznegger clone now gets to hold the bridge against the entire Saxon army, one-at-a-time.

· Place a single Saxon huscarl figure on the bridge facing our hero. Both players roll a 1d6, with the Viking adding +2 to his score. The loser is killed.

· As soon as the Viking is killed, the bridge is crossed. Play immediately proceeeds to the Orri's Storm section.

· If the Viking manages to kill three opponents, a turn is considered to have passed. As such, the Viking player may act on the Viking Reinforcement card as above.

· The lone Viking may hold the bridge against a maximum of six opponents (two turns, giving the Viking a maximum of two Viking Reinforcement opportunities). If he defeats all six, it's considered that a cowardly Saxon cur has snuck beneath the bridge and killed our hero with a spear from blow. Play immediately proceeds to Orri's Storm.