I'm attempting to get ready for Historicon (July) and I plan on running at least two Maximilian games at the convention.
Over the last week I have painted a Chausser a Pied (French Light Infantry unit), along with putting flags on 23 units!!! Created a C-in-C command stand for the French, and Major General Thun for the Austrian Legion!


The armies are really starting to take shape.

Need to order some Litko bases (40mm x 40mm) to get my artillery done and I have an order in with QRF for 2 more French Line units, French Imperial Guard artillery battery, and 2 more Cazadores Imperial units. They should be a lot of fun to paint.


I'll try to take some photos in the near future, but you can look at my collection via the "Maximilian" label in this blog.


Major General Thun of the Austrian Legion with his new Flag! 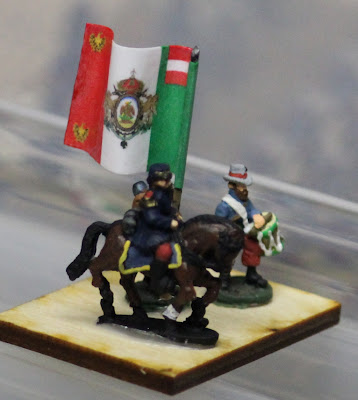 My "Projects for 2011" post did help me keep focused a little bit, so I thought I would start 2012 off with a project list and see how I do! In 2011 I was most happy to complete my Din of Battle ruleset for Piquet Inc, along with flocking most of my SYW collection! I'm going to shorten the list this time to see if I can get a sense of completion.

Maximilian Armies
This project is for my Historicon 2012 games: Battle of Puebla and Battle of San Isabel.