Thought I would post a couple teaser photos from my Boxer Rebellion setup that will be played on this weekend. I have eight friends coming over to do battle in this large Chinese walled port city.

This is 15mm terrain, and we will be playtesting Din of Battle 2nd Edition rules for the Piquet Colonial period.

Scenario is a dawn combined arms attack to destroy the Boxers and punish the Imperial Chinese for providing weapons and safe zones for the Boxers. There will be two naval landing forces, backed by naval gunboats, along with two land attack groups. The international forces will be composed of French, Italians, USA, Russians, and British.

Enjoy the eye candy, most of which was made by the great terrain maker: Mal Wright!!!

Black walls of the City 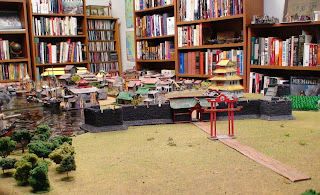 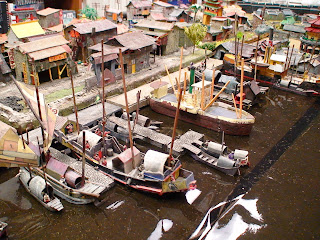 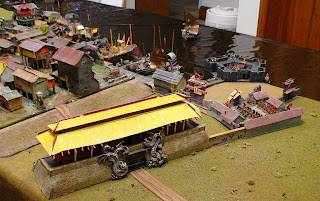 View of the market and docks, Black Citadel in the background guarding the harbor. 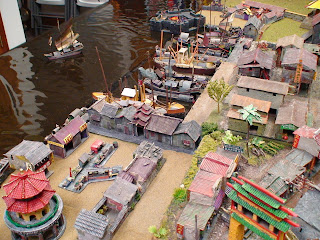 Posted by Eric Burgess at 7:36 AM 4 comments

Just got back from Spring break and started back into my Russo-Polish War project.

I painted, based and flocked two heavy gun batteries. (15mm) 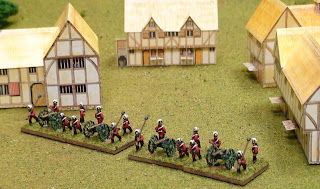 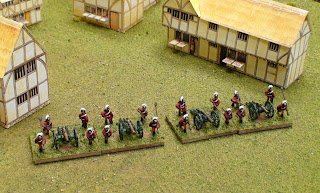 I hope to have a couple Lithuanian and Polish 3# gun batteries completed. The Polish\Lithuanian Commonwealth lacked much in the way of heavy artillery. 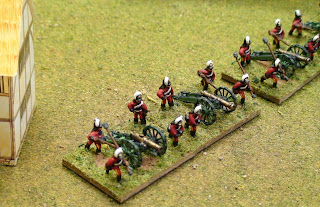 Cheers!
Eric
PS - I still have to upload some photos of the French vs. Austrian Revolutionary War battle and the Siege of Vienna battle!
Posted by Eric Burgess at 10:56 AM 0 comments

My good friend Dan Schorr has a wonderful Swedish Army for the Russo-Swedish War of 1788-1790, which is right in my wheelhouse.

I asked if I could post his army photos as this 15mm collection is unique. Figures are painted by Dan, figures are from Falcon UK's 15mm line specifically designed for this period. Dan took the photos. Dan has one stand units, so his infantry are 10 figures per base. Cavalry is usually 4 figrues a base. 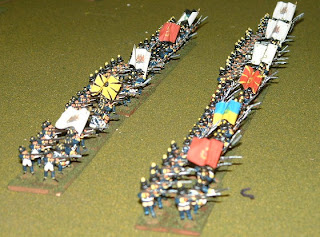 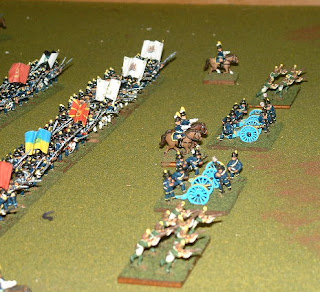 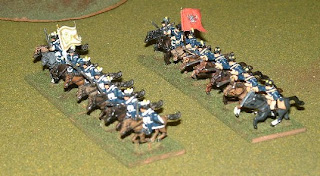 Swedish Generals between the two batteries 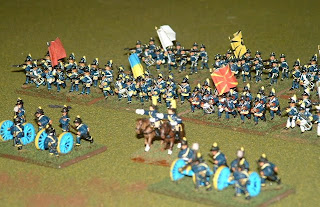 Hope you enjoyed seeing this unique army!
Eric
Posted by Eric Burgess at 9:08 AM 2 comments

I've made some great progress over the weekend.

More artillery was put on the assembly line for both my Russian Potemkin forces and my Polish\Lithuanian forces. I should have two heavy batteries, and two light batteries done for the Russians within a week. Plus two light batteries for the Polish forces. I think I will make a Heavy Polish (12#) battery even though the Poles never had these in the field, but I could use them in the defense of Warsaw (Praga) battle. This project is too much fun!

Because we are running a HUGE French Revolutionary battle I have to put flags on my 26 regiments of Austrian infantry. I've knocked out 10 this morning and hope to finish the rest this evening. I'm sure I will have them done by Wednesday's game. Took some photos of the battle setup already as Hal's French Army is so unique. He must have at least 20 different manufacturers of figures in his collection. I believe he has the best French\Vendeen Collection in 15mm in the world.

I bought my Austrians at Historicon to fight my Ottomans (1788-1791), but they will also fit in nicely with Hal's French Republicans.

Obviously, I will post some photos of this game later on. :-)

I also played in a Siege of Vienna game over the last weekend and had a great time. I will post photos of that too.

Good gaming!
Posted by Eric Burgess at 10:10 AM 0 comments

One of the best parts about these conflicts is that you don't need a lot of miniatures to fight nearly every battle in the war. 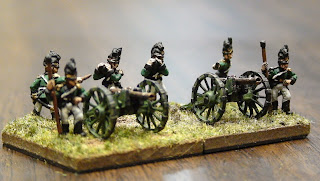 I need to find some 3 pdr guns as the Poles and Lithuanians used them in batteries as they didn't have a lot of artillery. 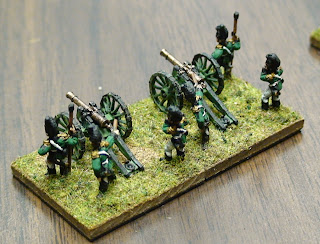 In addition, I finished putting flags on all my Russian Potempkin units this week. This puts me one step closer to completely finishing my Russian collection! Yippie!

Next up is to paint more Russian guns and order more Polish from Falcon UK to finish the Polish Army.

Cheers,
Eric
Posted by Eric Burgess at 7:00 AM 0 comments