Barrage Battalion Scale and Lots of Board Gaming

We fought this battle twice, with a early war German Division assaulting a Brigade(+) of Belgians holding their supply line. August 1914 timeframe.

The goal was for the Germans to take both villages in 4 turns (2 hours of battle time), thus cutting the Belgian supply line to Liege. We used my Barrage WWI rules, but altered to Battalion Scale (each unit is a battalion). 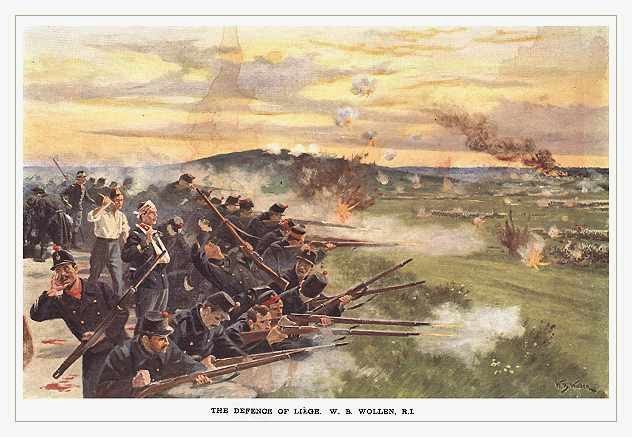 First Playtest
Here are some shots from the game. Since this was the first playtest in a while we didn't quite finish this game in the evening. Germans were making very good progress, but were taking some punishment. Germans started with two Brigades on the board and a third arriving later (randomly on an Assets Arrive card)


General situation: Germans have to take the two towns located on the main supply road (far side of the table) 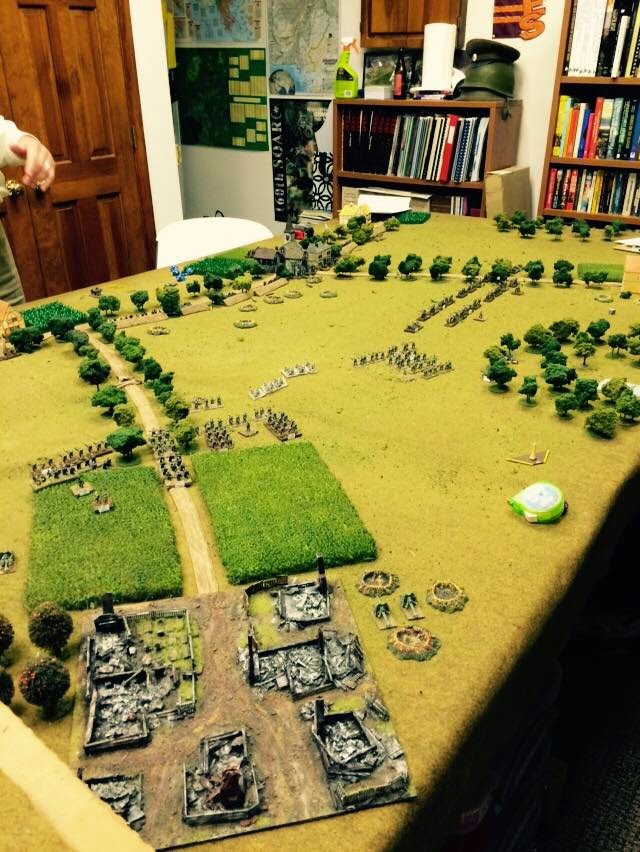 Belgians ready for the attack. Although the Belgians looked entrenched the earthworks only represented hasty works: logs, dirt, furniture from town, etc. We rated at as CLASS II terrain for game purposes. 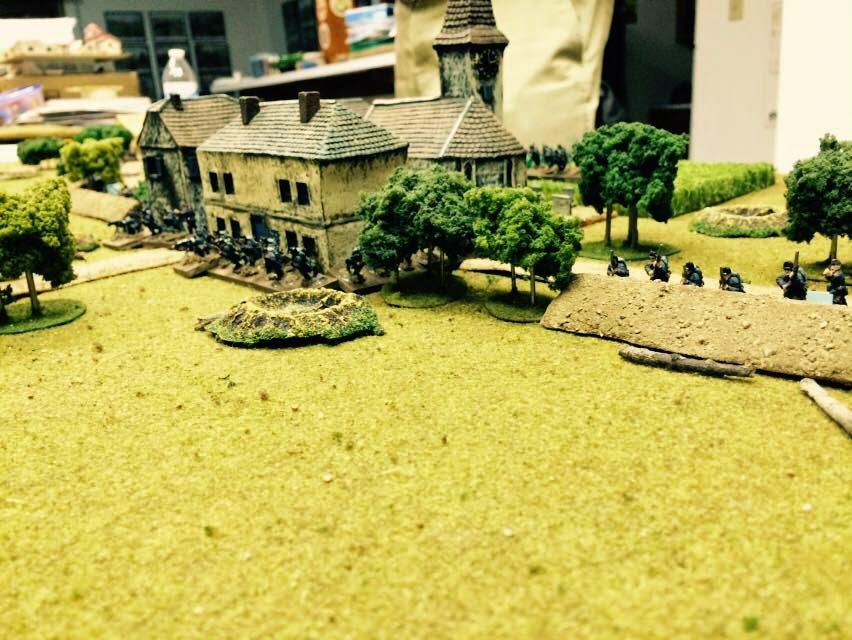 Photo from the Belgian perspective:

German 18th regiments advances in extended order towards their objective. 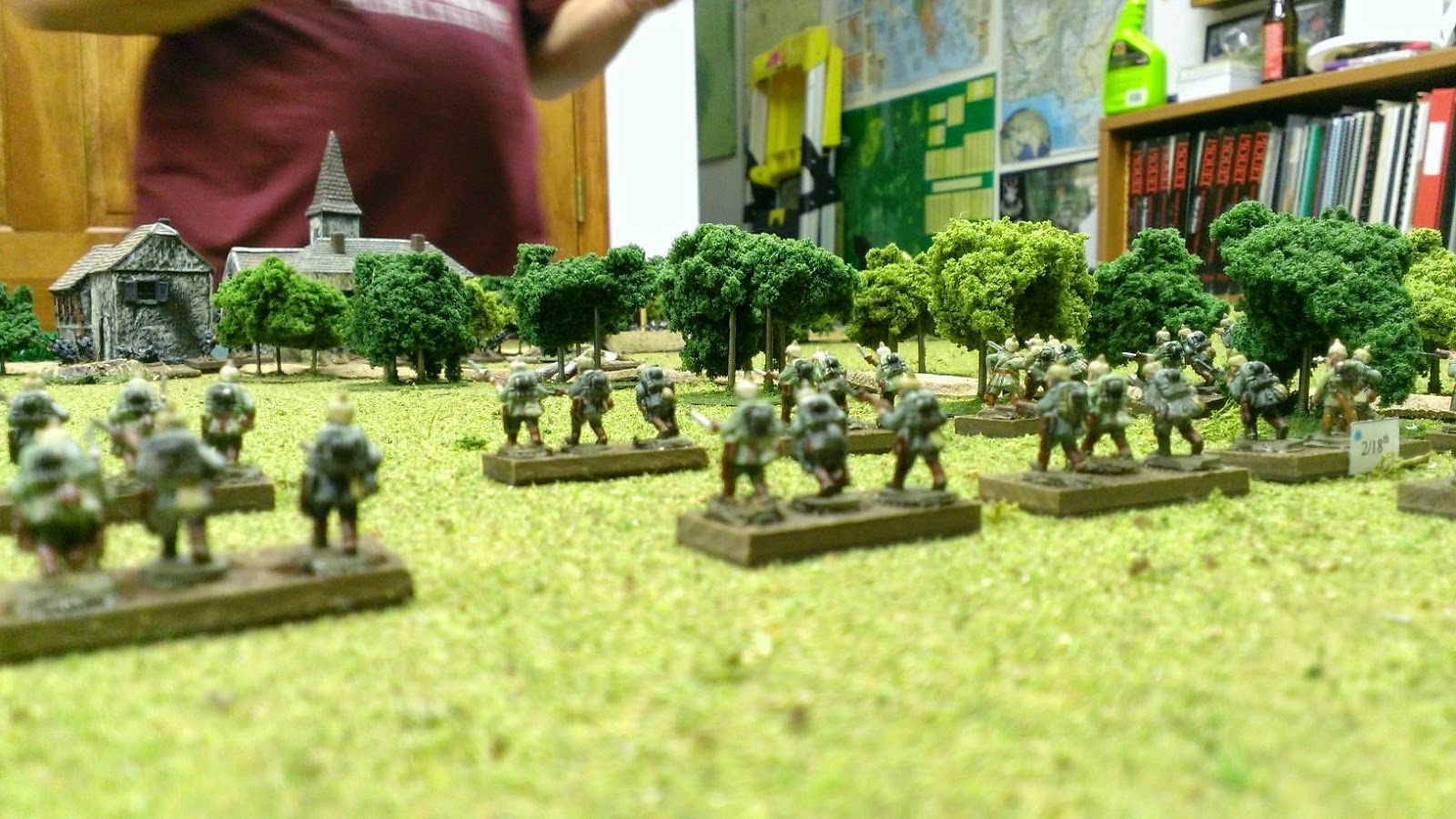 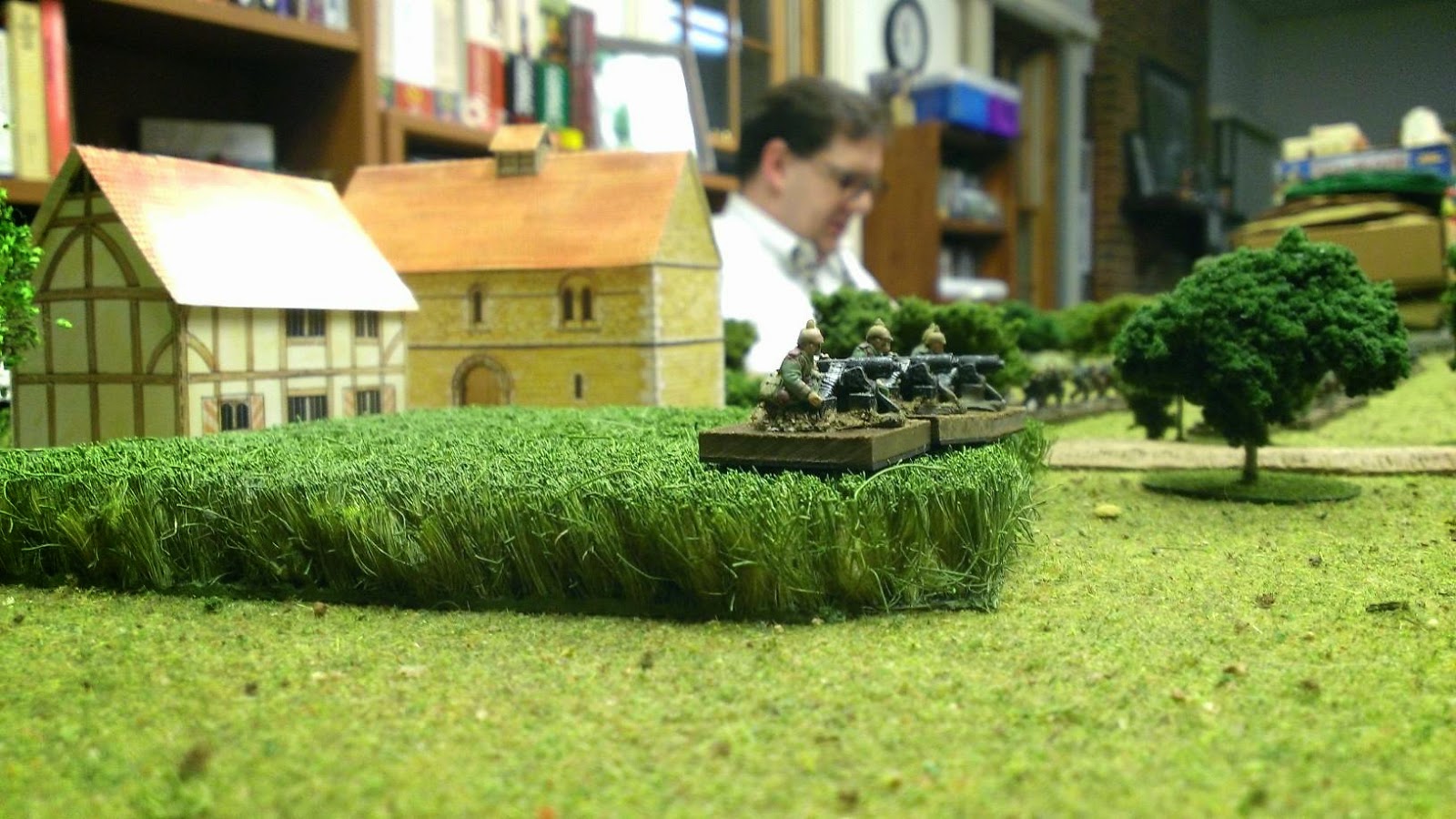 German Jaegers advance in depth along a tree-lined road. 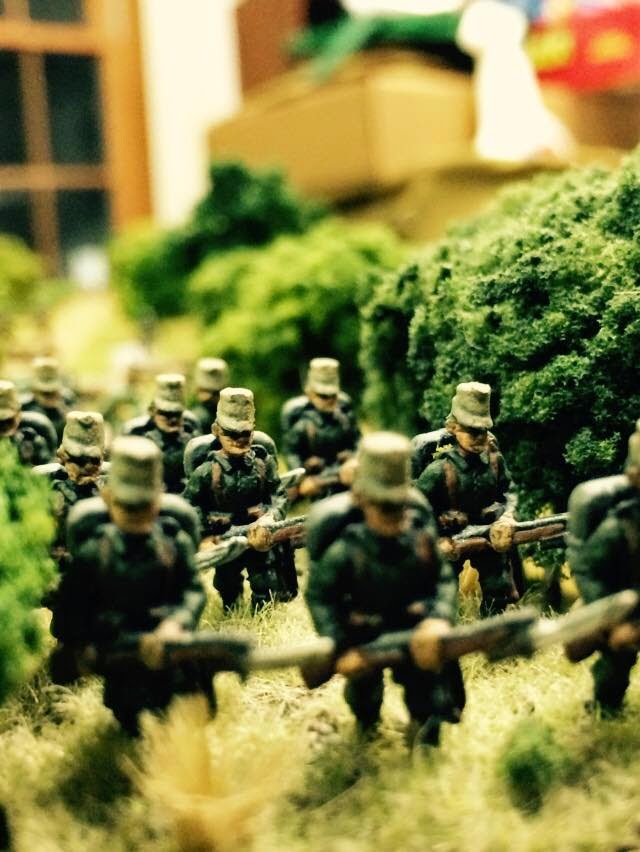 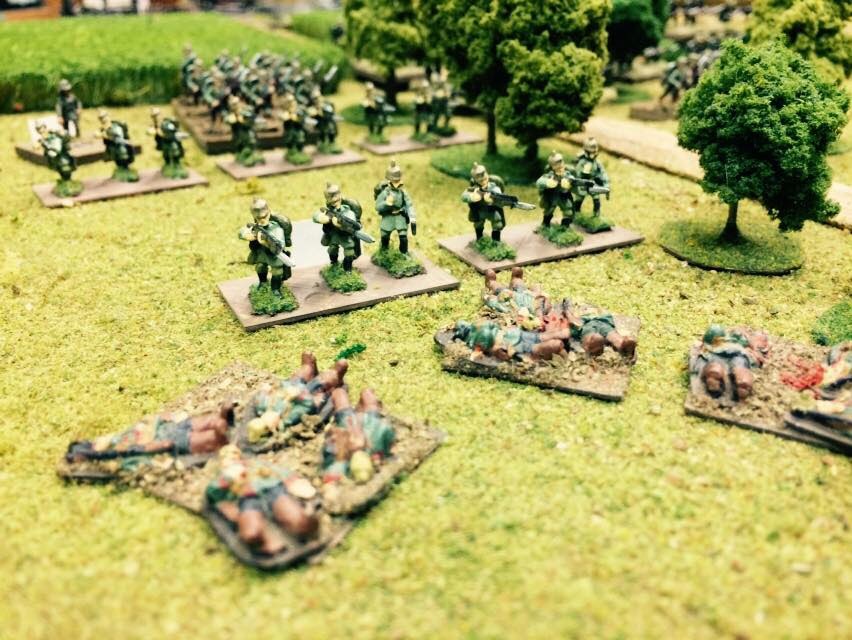 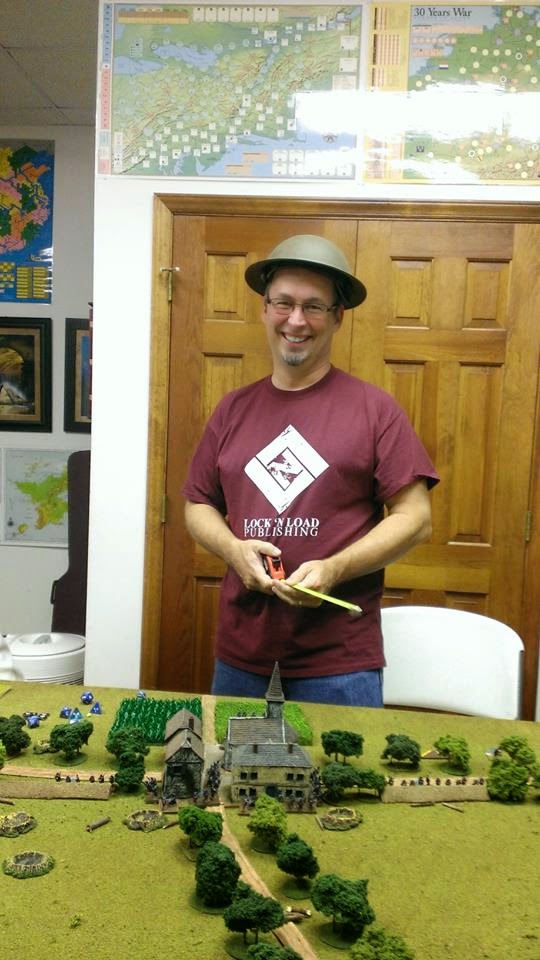 The second playtest, the Germans were able to take the smaller town from the 2nd Carabinier regiment that was defending it, while the 8th German regiment breached the middle of the Belgian line overrunning 2 batteries and a Belgian infantry battalion, then rolling up the flanks of the other Belgian units holding the line. Suddenly another German brigade arrived on the battlefield to confirm the victory. We really had a great time. Game lasted 3 turns.

Here is a quick stop action movie of the latest Barrage Battalion Scale game we played with a couple of cool photos.

LINK to more photos and another time-lapse movie from the other side of the table. 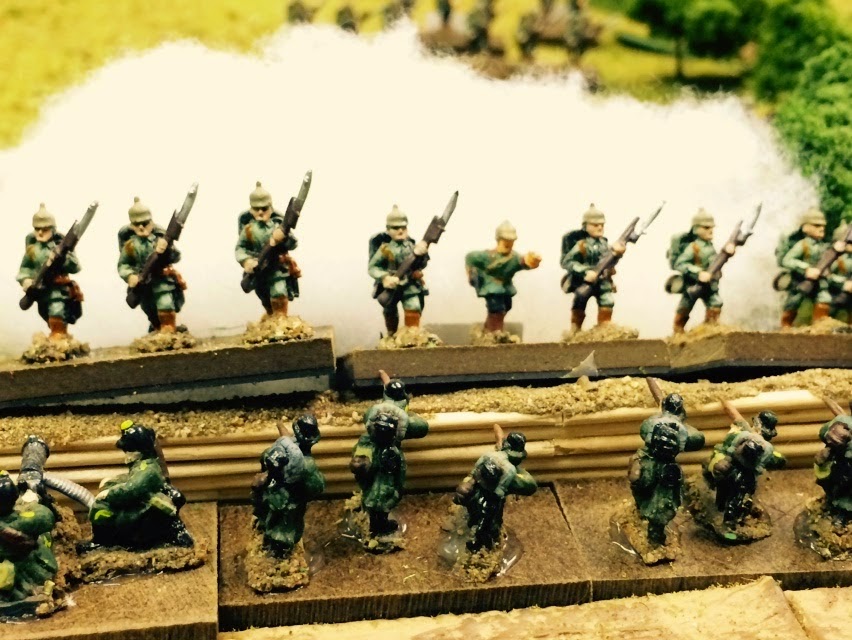 Here you can see the German 8th regiment breaching all along the Belgian defensive line: 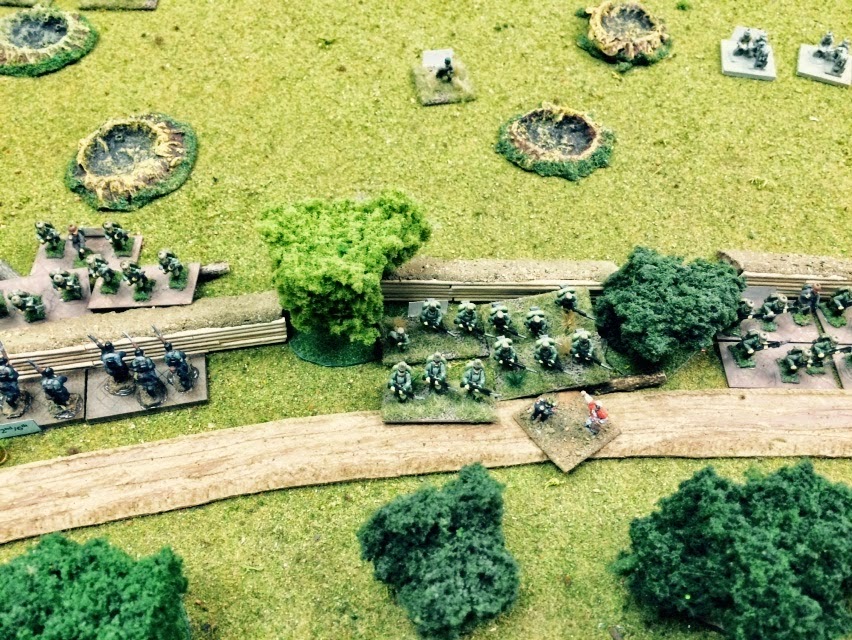 
On the Board Gaming Side

We have been continuing to playtest When Whales Fight (1950s Korea) the block game to be Kickstartered as part of the Fog of War series from Academy Games. Top notch fun!