The Sans Arc vs. 7th cavalry battle was absolutely amazing last night! This is the 5th battle in our Plains War campaign and it took place on turn 16. Each campaign turn is roughly 3 to 5 days. I was the commander of the Sans Arc (the campaign commander for the Sans Arc is Mike Huskey and he is a remote commander and doesn't live here in Charlotte). Brian was the 7th cavalry campaign commander. He was taking a big chance taking on the Indians, with meager forces, but his troopers were out for revenge after their debacle at the Battle of Johnson Pass, where they were routed, cut to pieces, and Colonel Doubleday (commander of the 7th) to an arrow in the buttocks.

Oglala: 7 warbands (didn't make it to the field in time as they were riding to the aid of the Sans Arc)

Photo: Initial deployment. All the dismounted Indians around the tipis represent villagers (as I haven't painted mine yet). 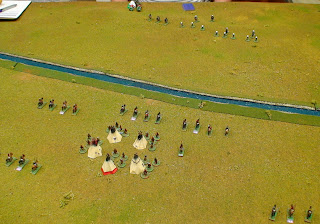 The good news for the Indians, is Black Elk was able to lead the ENTIRE Sans Arc village and pony herds off the board, towards the south and into the winter hunting grounds. This means the Sans Arc are safe from the blue coats for another year.

The bad news part 1, the Oglala warriors (seven warbands) were not able to get onto the battlefield in time to help their Sans Arc brothers.

The bad news part 2, your Sans Arc warriors fought heroically, but took a severe beating. Four of the five warbands were destroyed or routed from the field. Black Elk was nearly captured\killed, but was able to escape as darkness covered the battlefield. The only unscathed Sans Arc warband was #5 which were green warriors. Remember that post battle casualties will be light in a campaign, not that it matters here since the Sans Arc are done for the campaign.

The Indians rolled average for their quality, while the cavalry rolled up a two EXCELLENT units (determined), with the others being average. Most of the TAD cards for the Indians had little or no effect due to when the TAD cards were drawn. There no counting coup in this battle due to distance from the enemy.

Impetus: We used opposing D12 with the rule of 1/3. This works perfectly for smaller battles and is part of Din of Battle 2 rules. 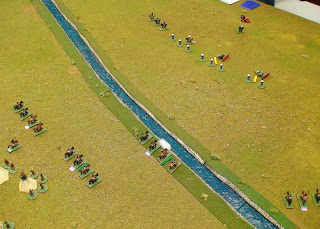 The battle was see-saw affair and the Sans Arc nearly rolled the entire cavalry line up with a flank charge by warband #2, but he was defeated in a second set of melees. The cavalry player nearly shit his pants as he had just had the Sans Arc on the ropes then they had him by the nut sack with the Sans Arc flank attack, which overran company A destroying them. 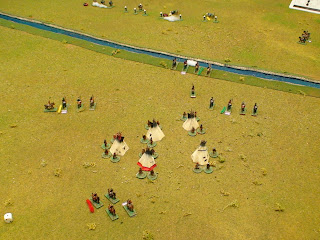 Photo: Company A of the 7th being overrun by the Sans Arc warriors! 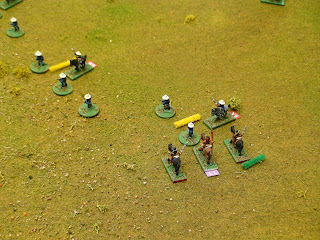 Photo: Company B hit on the flank, defeat the indians on the first round of melee, turn and fight again and rout the Indians! Such courage and determination! 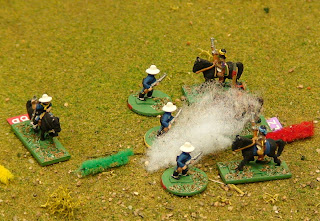 This caused the cavalry great troubles and the constant Indian sniping slowed down his approach which allowed the village to get away. Company B of the 7th cavalry will be receiving campaign battle honors as they defeated that flank attack, shot another warband to pieces as the Indians crossed the Fox River to try to flank the cavalry line again, then they crossed the river on foot, mounted up and delivered a hellacious charge which drove off the veteran warband (Kit Fox Society) leaving nothing between them and the village. The cavalry won the impetus after that, but failed to turn a cavalry move in open card before the village slipped away under the cover of darkness.

7th Cavalry gains 4 VP (routed and enemy units destroyed)
Sans Arc gains 1VP (1 for destroying company A) They will also get VPs for having over 50% of their village make it to the winter hunting grounds.

Photo: Cavalry moves to the Fox River, Colonel Doubleday attaches to B company (right) leading from the front. The Kit Fox Society warriors screen the village. 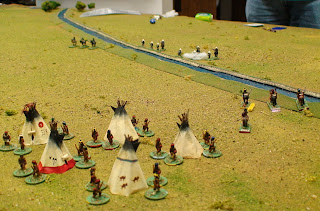 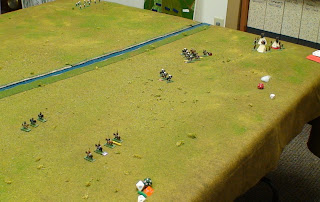 Photo: Company B routs the Kit Fox Society warriors, who were the last warriors screening the village. Black Elk, Sans Arc chief, can be seen behind the Kit Fox warband, but wasn't attached. He was nearly killed, but was able to escape with the rest of village as darkness engulfed the plains. 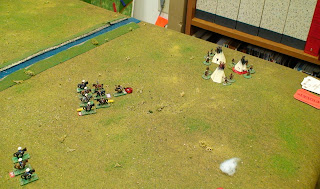 I had someone ask me about how I make my Plains War terrain. After reviewing several books and looking at online photos of the plains battlefields you see a lot of open ground, some clumps of trees, buttes, and gullies.

Terrain is very important to me when I'm gaming, so I went to work on making some hills\buttes\gullies, etc.

To make the larger hills I carved them out of 3" thick pink insulation foam I bought at Home Depot (4'x8' sections). The board is pre-scored so that you can break them into 2'x4' pieces for easier transport. I use the Foam Factory foam cutters to make my hills. 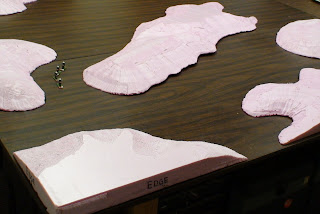 I made the slopes of the hills fairly steep, but smooth enough to place figures on them without them falling over. 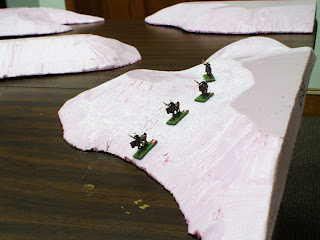 Some hills are flush with the sides of the table so they are flat on one edge. Others go into a corner and have two flat edges, while others can go anywhere on the table.

I made smaller 1" hills (gentle, rolling hills) by cutting the 3" in half along the length of the foam like cutting a bagel in half. 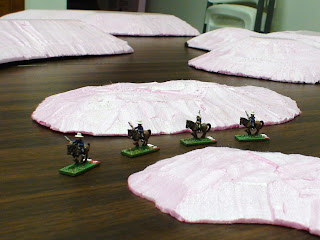 This allows me to make very large layouts with larger hills, and smoother hills.

After I layout the hills to my liking, I then cover them with my 6"x16" flet cloth. I use pins to hold the cloth down to the hills. I like to set it up a day or two before the game to let the felt relax onto the hills and gives a smoother look.

The cloth is just covered in static grass, flocking, and balast of different shades and coarseness. I eventually want to glue this turf down so I get a more consistant and permanent look, but haven't gotten around to that large project.

Here is the battlefield for our next Campaign Battle (Battle of Fox River) which will be played out on Wednesday. 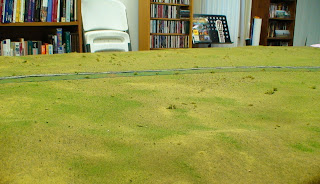 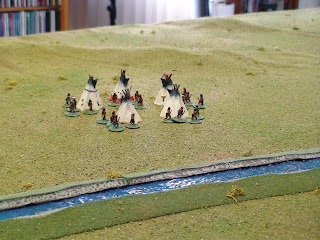 Village with small pony herd near the Fox River: 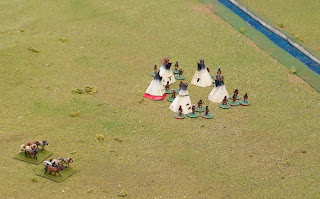 Close-up of the village, but I don't have any villagers painted yet so warriors will be used in place of them for the game: 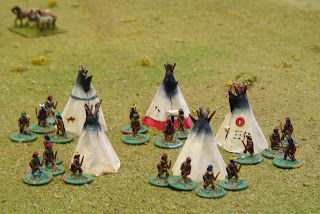 I think the outcome looks really great for Plains warfare, and I can still use the felt for any other game period. Hills also work for other periods without many issues.

If you have any questions please ask.
Eric
Posted by Eric Burgess at 1:38 PM 3 comments

Some quick shots of the overall town: 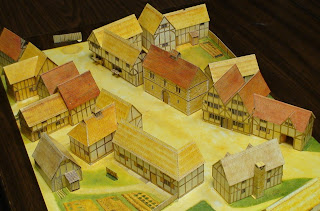 Shops on the main street: 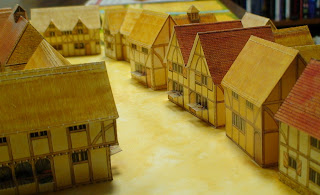 Small stable behind the Inn: 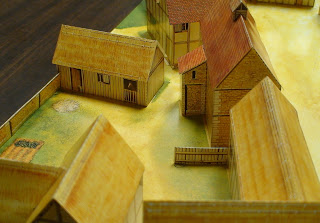 Here is a picture of the front cover. 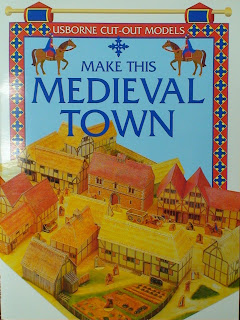 The town section works with the Village, Cathedral, and Castles sections. Here is a photo of them all together. 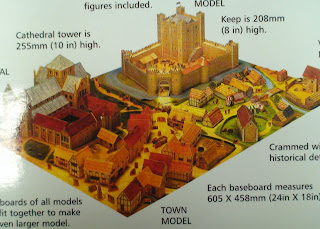 Here are some shots of the buildings on the paper mat along with some SYW French infantry (15mm) marching through the center of town. 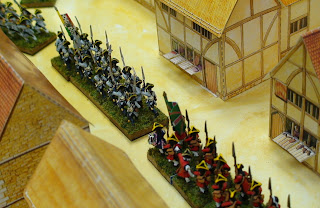 I will use the buildings for many of my upcoming Siege battles where there is a town inside the fortress. Thought you might get a kick out of them. I'm working on the Village section next which has a Mill, Blacksmith, Manor House, and small church, along with some thatched houses. I hope to eventually mount these buildings on diorama style bases, with flocked basing, etc. 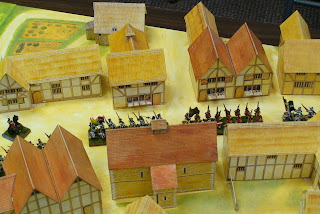 I'm going to try spraying the buildings with a dull coat finish to "tone" the shine off of them. Buildings take anywhere between 15 minutes to an hour to make depending on size and difficulty. I usuallly make them while watching\listening to sporting events on the weekend.