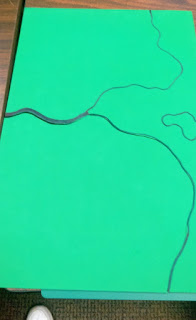 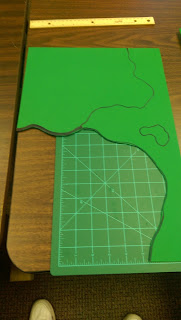 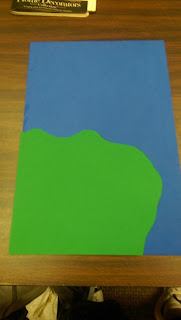 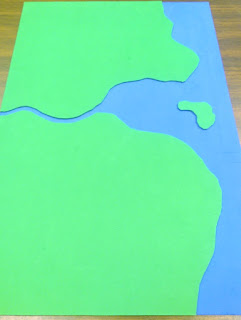 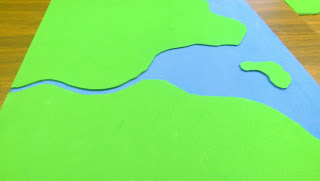 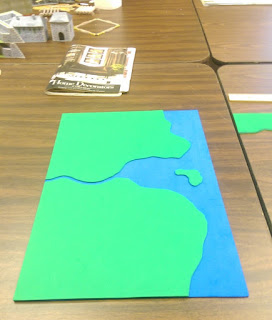 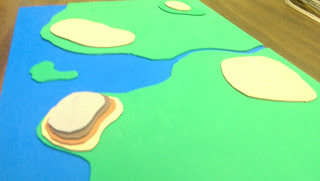 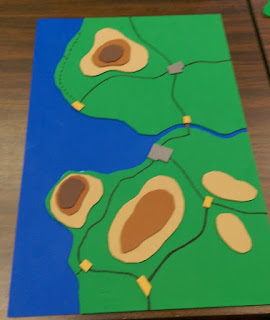 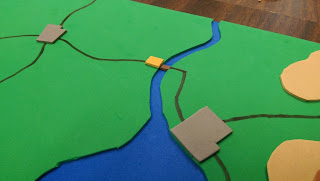 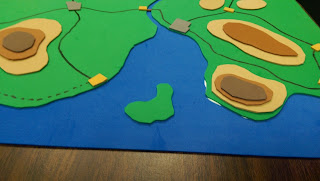 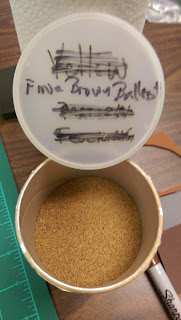 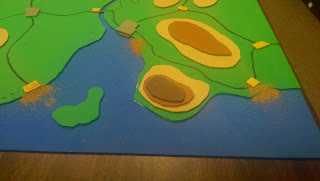 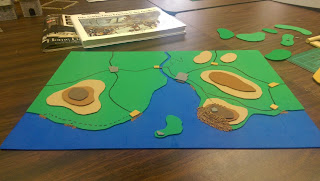 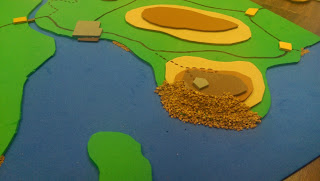 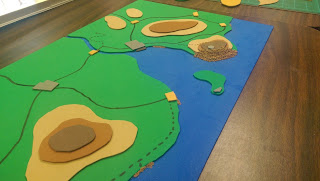 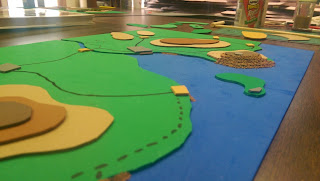 Most of the feedback has been very positive for the 3D Campaign Maps, so I thought I would share a little more progress and setbacks in the prototype.

First, here is the picture of the fields around the towns after I added 3 different paint schemes to the original green of the paper cut-out. I really love how these turned out. 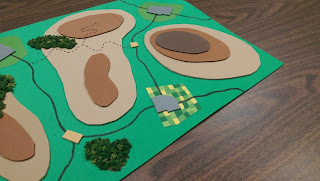 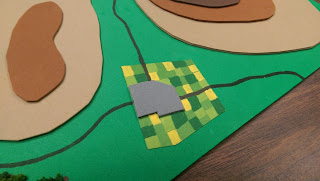 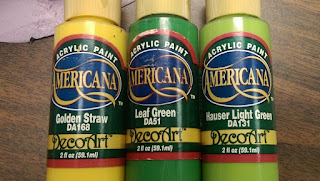 Pros: great visuals
Cons:
1. I think the fields are too big, but I may be wrong. I could get away with much smaller fields surrounding the towns.

2. The paper that I glued onto the foam has contracted, causing the edges of the foam to turn up near the fields. Uggh! Just look at this warp! 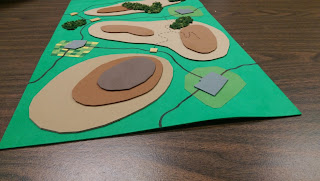 Solution: don't use the "field" paper, and just paint on the fields. I'll have more control over the layout that way too. Also, I will be adding another foam sheet under the terrain to give it more sturdiness and to allow for something special. You will get a glimpse of that in the next post.

Added Villages
You can see the light colored brown villages along the roads. I wanted them to look different than towns. 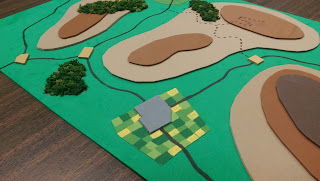 Posted by Eric Burgess at 9:27 AM 5 comments

I've been thinking about making 3D campaign maps for a while. I guess I don't have anything better to do! NOT! 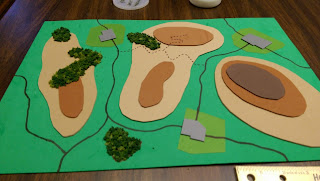 I really like the look, especially once I added the forests. Still playing around with the looks of the fields, and towns, but overall I'm pretty happy. I love how the forests look, but that is a lot more work. I could just go with different colored paper\foam, but it wouldn't look as cool. I'm going to add some small ballast for rocky grown just haven't gotten around to it. 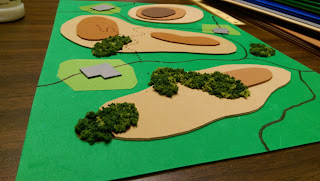 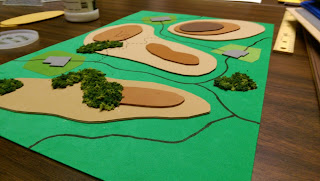 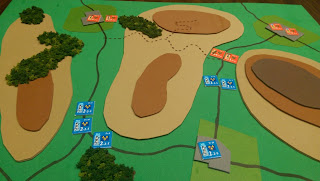 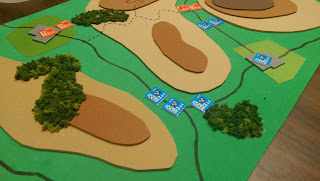 I think I can use these maps for nearly any period of warfare. I could even cut out towns in shapes of castles if needed. Right now I'm gluing everything down for easy storage.

So, opinions? Should I continue? Do you like the color schemes? Is it worth it? Should I get back to painting miniatures?

UPDATE:
I got some great questions in the comments section so I'm going to add them here.

The maps will be geomorphic. As you can see there are two rows (4" in) on the long side of the sheet, and 1 road 6" in on the short side.

How did I make this prototype?

As mentioned, I bought the 12" x 18" craft foam sheets from Michael's (see link above).

I picked the best green one for the base. (I'm likely going to glue that one on to another sheet for stability).

I then cut out other colored sheets for the hill contours. I used lighter to darker shades as the hills rise. Two additional heights would be grey and white for snow. (You could also do a winter version of these maps, but you would likely need to do a lot a painting to make it look decent)

I then placed the hills on the base and moved them around until I could visualize the layout I wanted. You could easily sketch them out before hand, which I will do in the future.

Once I was happy with the hills locations I glued them down to the green base sheet. I guess you could just glue the hill portion together and not glue them to the sheet to add more flexibility to your layout, but I think I will glue all my terrain down for stability reasons. These are so cheap to make I could make 20 of them without blinking an eye.

After the hills were down, I cut out green "fields" and grey "towns" and glued them on to the green base. The fields were a special paper with small ridges in it, which should paint up nicely into crops. I'll post pictures later on how that turns out. I also placed some small village (light brown) on the maps which I will add photos of later. This makes the distance between towns not so far.

After all the foam pieces were glued and dried, I used a brown Sharpie (normal size, not fine) to draw the roads and trails (dashed lines). I was originally going to paint the roads, but the brown looks good enough and can pass for multiple time periods, including moderns.

Lastly the forests. These are shredded pieces of Woodland Scenics foliage clusters. I love how these turned out. I first painted the area I wanted to be woods with brown paint (forest floor), and then glued the clusters to the area painted brown. Simple. I did use Scenic Cement on the forests afterwards, but found that was not necessary. (I didn't put Scenic Cement on one of the forests and it turned out sturdy and fine).

Note, these maps show the MAJOR features of the terrain. When you go to battle you would have a battlefield "frame" (envision a empty picture frame), that you would lay on the map. You would then transfer the major features to your battlefield and add additional small features like farms, small hills, small woods, streams, etc.

Well, as the map looks now this would be a localized campaign lasting up to several months. As most of you know, larger campaigns are very tough to complete and having a small operational campaign may fit the bill nicely. The plan is to build around 20 of these, and the campaign would be fought across 9 to 12 sheets.

I can see this as great for any period of warfare:

Will you be mounting it and using push pins, or leaving it laid out and transferring encounters to your miniatures?
EB - The counters will just mark locations of soldiers. You would transfer to the gaming table using the Battlefield Frame I mentioned above. I'm not sure how the foam would handle push pins, but then you would need to mount it on cork or thicker foam. I'm sure it could be tested with some scrap foam pieces as you cut out the terrain.

What are you using for campaign rules?


EB - Not sure what I'm going to do first. As you can see from my blog I have run several campaigns using my own framework.

Have you considered either cutting the board into quarters and making them geomorphic?
EB - They will be geomorphic. I don't plan on cutting them into smaller pieces.
Will you do water features the same way?
EB - Yes, and I really think you will like the idea I have for them.

Are the roads inked in?
EB - Yes, with a brown Sharpie. Simple is sometimes the best.
Is each level of terrain independent and relocatable, or are your hills permanently attached?
EB - They are currently attached, but you could make them independent to begin with or create additional pieces that could be added to existing maps. This particular prototype map is very hilly.