I had a great time at Historicon as usual and five gamers generously gave their time and bad die rolls to playtest my latest revisions to Vauban's Wars.

The good news is that the rules will be published within a year as I feel very comfortable with the mechanics and I just have to finish writing up some of the sections.

Here are some photos of the game in progress and some minor commentary. We had some of the worst die rolls in a game I have ever seen, yet the game didn't break down and it came down the Russians pulling the Assault card before the Polish relief army arrived.

The playtest was the Siege of Praga from the Polish Insurrection of 1794, with the Russians under Suvorov assaulting the Polish forces of the Crown.

These photos should give you a sense of the progress of the siege. Click for larger images. Photos are from multiple cameras\phones. 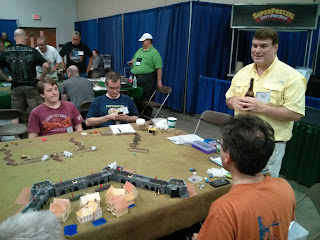 Good shot of Russian commanders Thomas (VT shirt) and Andy (blue shirt posting photos of the game in progress), while Tim Couper (other Russian general takes a photo). I'm here in my dashing yellow shirt with beer in my hand. (Shock!) The Polish player's called me the Quartermaster as I kept advising them about Powder expenditure, which they promptly ignored! 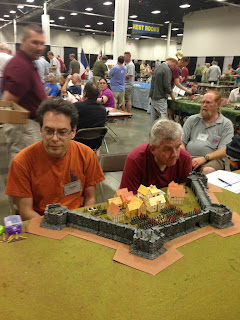 Polish player's Adolfo (Orange) and Mike Huskey (maroon), before the battle, while I'm briefing them about the rules and objectives of this playtest. 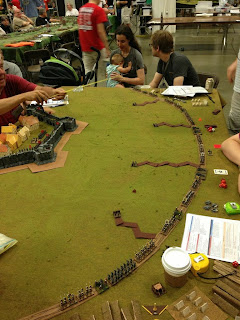 Here you can see the Russians starting their saps, while all of their troops are deployed in the First Parallel. 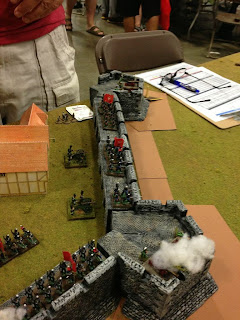 Polish Bastions A & B firing into the Russian sappers. Polish roll the unique event "Relief Army Arrives" on week 2 of the siege. They were scheduled to arrive on week 6. Will the Russians be able to reduce the fortress in time? 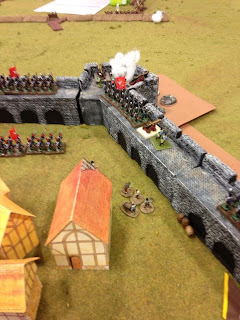 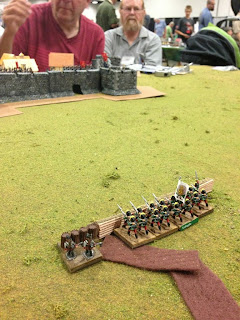 Russian sappers on the left guarded by a battalion of Russian musketeers. John Mumby (gray shirt) looks on! 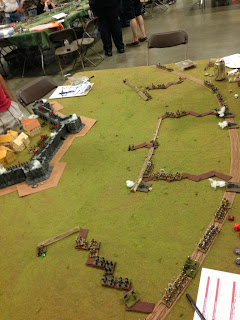 Here is the view of the first signs of the Second Parallel being carved from the earth. Green marker on the sappers indicates they have been driven to cover by fire from the fortress. They will need to rally in order to begin sapping again. 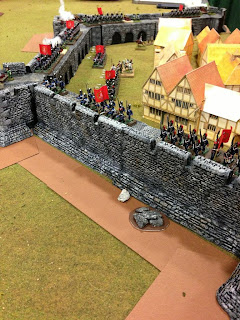 Magazine Explodes! First time that unique event is happened in a playtest! The Poles had two magazines and the one on the left side of the fortress exploded, causing them to lose 2 powder (they only had 5 to start with), and they rolled 2D6 for wall damage. Up until then, the Poles had rolled hardly anything over a 2 on any die, so the promptly roll an 11 for structural damage to the wall where the magazine was located. You can see the clump of rocks (equals 10 hits), then one additional rock to signify the 11 hits. The Russians now see a second location that they can target for a breach. 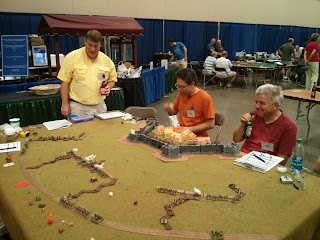 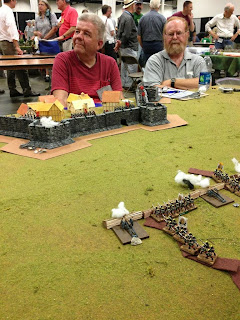 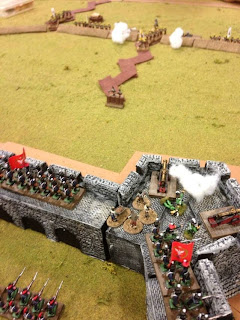 After the Second Parallel was built Russians sappers under Thomas (soon to be Engineering graduate from Virginia Tech) pushed aggressively forward in order to make the 3rd Parallel. This led to many casualties for the Sappers\Engineers. In the above photos you can see Polish sappers trying to desperately repair Bastion C. 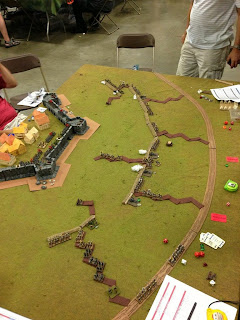 Above you can see the 2nd Parallel completed with most forces moving forward. You can see three sappers digging closer to Praga! 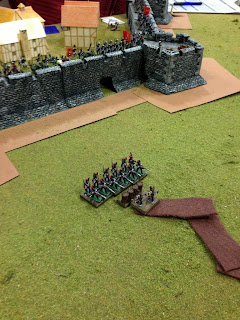 Trench Raid! Poles send 3 companies (stands) of Grenadiers to attack and kill the unprotected Russians Sappers. A setback for the Russians, but they can make more sappers. 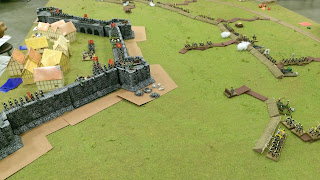 Slightly different angle, which shows 34 damage to Bastion C (pile of rocks!). Note that Praga was surrounded by a dry ditch (brown paper in front of the walls). 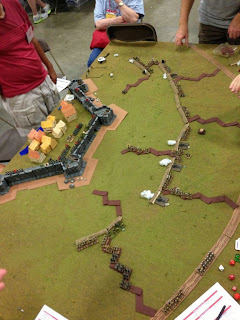 The Russians are nearly ready to start on the 3rd Parallel. Poles have run out of Powder by now and have to husband their remaining shots for the Russian assault they know is coming. 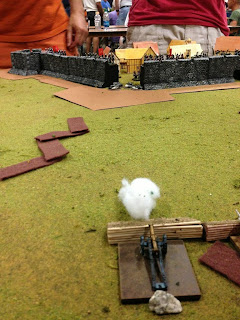 Crash! The Russians create a practical breach in the C Bastion! 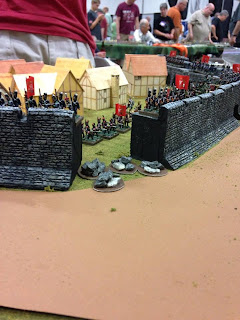 Forty hits against the C Bastion reduces it to rubble. 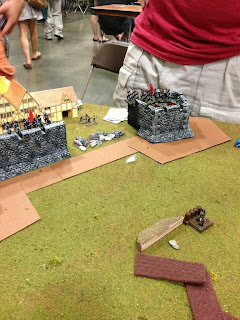 Oh no! The wall where the magazine exploded is also reduced to rubble! Now there are two practicable breaches. 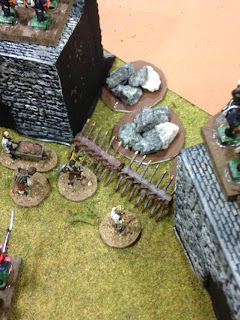 Above, Polish sappers prepare barricades and obstacles to slow the Russians down. 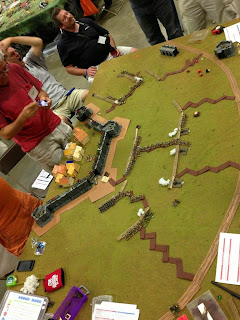 This last shot shows the table at the time the Russian Assault card is turned. The 3rd parallel is completed at both locations where there is a practical breach. The Russians have massed their infantry for the assault! Normally, we would fight the assault using our favorite tactical ruleset of choice, but alas it was late in the evening and my playtest was a great success!

Many thanks to my eager and happy-go-lucky playtesters: Tim, Mike, Andy, Adolfo, and Thomas! Hopefully this has sparked an interest in siege warfare for them!

I hope to release the rules in the first half 2014, as I need to finish writing the rules and playtesting a couple more items.

If you have any questions, please email me directly: EBurgess@Carolina.rr.com

Well, I have finally gotten back into miniatures after nearly a year off. I'm re-writing parts of Vauban's Wars (Siege Warfare 1680 - 1815) in an effort to stream-line the rules.

I'm going to have 5 play testers at Historicon to help me with the 10th revision of the rules!

It will be good to have 5 gamers that have never played the rules give me their feedback on game play.

We will be fighting the Siege of Praga (Warsaw) during the Polish War of Insurrection 1794!! Hard to get more unique than that with the Russians attacking the Polish garrison.

My game will be run on Friday Night at 7pm so please drop by and play in the rubble!

Eric
PS - desperately trying to finish painting the fortress and guns before Historicon gets here! I may post a photo or too later. I will definitely have a bunch after Historicon.
Posted by Eric Burgess at 2:29 PM 1 comments