SYW - The Russians are Coming and some others too

Several months ago I purchased Brian's SYW Russian army, which was one of the few armies I didn't have!

They required re-basing (to match my existing basing), new flags (I'm OCD about these and picked them up from Vaubanner), and some small paint touch-ups. One thing Brian didn't have was Russian heavy artillery, so I ordered from 19th Century Miniatures (Old Glory SYW 15mm range) and requested individual guns as I already had plenty of crew. I was thrilled I could order guns without crew and as many or as few guns as I wanted. I bought guns for the Russians and my Saxon army (which is nearly complete).

I just finished painting the new heavy batteries and decided to get them based and flocked, so that I will have six different batteries (3 heavy) for the Russians. This should be enough for my games and I can always use other nations guns as proxies if I need more.

Photo of Russian guns (with one more heavy battery crew being finished): 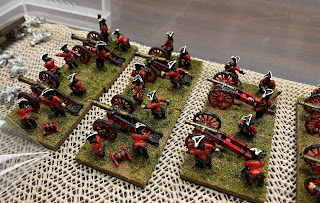 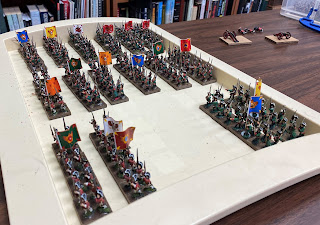 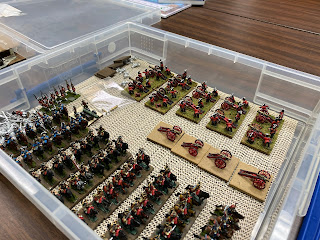 Just have 3 more infantry to re-paint their coats, add flags, then bam! I can at least play with the army. Need to flock, paint the flag poles red, then touch up the fringe of the flag edges so they don't show the white of the paper.

There were no Russian generals either, so I will need to paint those up. Other than generals and maybe some Horse Grenadiers, I think this collection will be complete once I finish rebasing all the units. I can use the generals for this collection and my Potemkin Russians (1788-1792) who can fight Poles, Swedes, and Ottomans.

I was also able to get some more units from Pep (my painter in Spain). 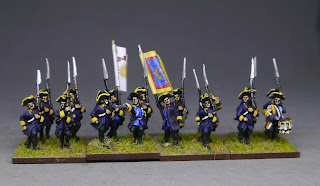 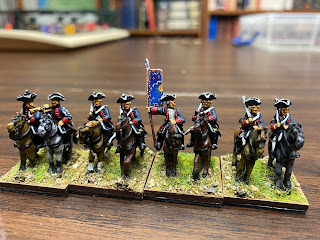 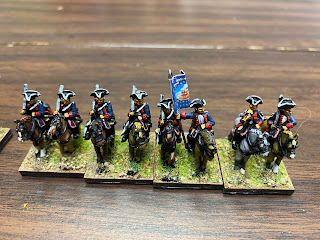 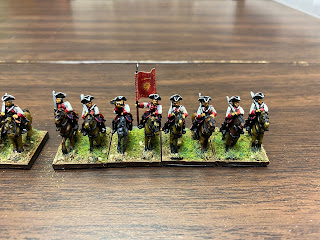 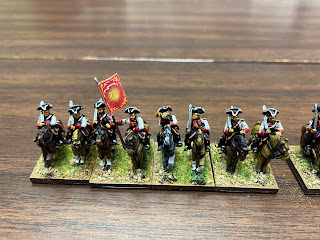 
I'm nearing the completion of my SYW collection! I can't believe this is going to happen. I just need to get my British done (about 15 units) and a few more French (Gendarmes), 2 or 3 Prussians, and I'm done! Woot!!!

When complete I will have the following SYW armies:
Other Horse and Musket armies:

Years of great gaming to come!