Well, I've been bit by the bug of these particular conflicts and have decided to actually put some effort into this period, since there is sooo little out there on that actual conflicts in the wargaming world.

By using wikipedia (Polish version) and the help of some friends in Poland I have garnered a lot of history and OOB information on the two wars.

My project goals are the following:
1. Create a 15mm Polish\Lithuanian Army to fight my Russians (in process)
2. Gather historical notes and OOB (in process)
3. Create Piquet "ready play" scenarios for all the major battles. (in process) I will upload these scenarios to the Yahoo groups for Piquet and the Polish Wars groups as I complete them.
4. Investigate the ability to create a Theatre of War (Piquet Campaign Rules) campaign game for both wars. I have two good maps that should lend themselves to play.

This should be a lot of fun. The scenario design will likely work for other periods I'm working on. The layout of the rosters for them should be ideal for any Piquet gamer.

Well, I'm pretty fired up about my Polish-Lithuanian Commonwealth Army which I will used to fight my existing Russian forces. Still need to flock the bases, but you get the idea. :-) 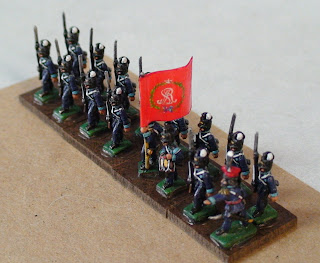 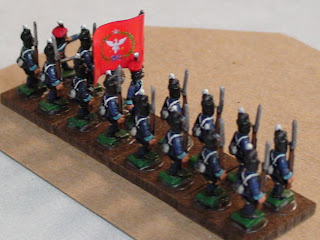 Photo of 5 Polish Crown Infantry Regiments - I now have eight of them based and with flags flying proudly! The Russians are in for a big surprise! 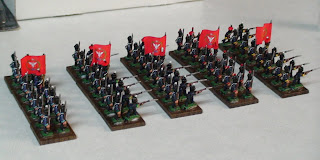 Russians that are going to come fresh from the Turkish front to fight the Poles! 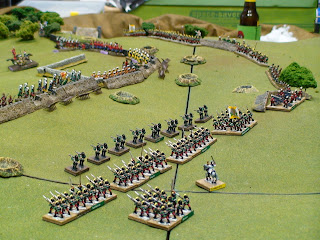 Should be a great project and loads of fun to fight once I'm through. I will be using Piquet's Cartouche\Les Grognards supplements to fight these battles. I will make custom sequence decks and ratings.

Cheers!
Eric
Posted by Eric Burgess at 8:00 AM 2 comments

I hope to have some photos soon of my new Rivers I'm making. I'm using Brent Oman's (his blog link is on the right) excellent discussion on how to make rivers with commercial tile which is 1/8" thick. My results so far have been very nice. The ability to make any river width, length, and curve is just amazing. Wish I had done this 10 years ago!

Well, I was at Williamsburg Muster (Wargame Connvention) this past weekend and Falcon Figures UK had painted Polish troops for this period, so I bought them. :-)

This will give me another opponent for my Russians (Potemkin helmets) and Austrians as they both attacked the Poles to gain territory during this timeframe.

I'm not going to try to recreate any particular battle so that will allow me to collect the following without much worry.

Cossacks fought with and against these guys so that makes my other Cossacks useful too.

Should make for some VERY unique gaming! On Military Matters has a book about this with uniform guides, flag guides, etc. I have already ordered it.

I'll post some photos of the new Poles once I get them based and flocked.
Posted by Eric Burgess at 2:11 PM 2 comments