As many of you know I'm going to be running two Maximilian Adventure games at Historicon in July: Puebla 1862 (Cinco de Mayo) and an ahistorical battle between the Imperial Mexican Army and the Republicans using my Din of Battle 2nd Edition rules from Piquet.

As I continue to paint 10 more infantry units I have also bought a Vae Victis (issue #79) game that covers the entire Maximilian campaign. 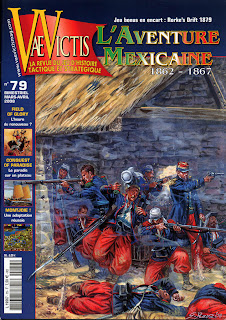 Boardgame Geek URL:
http://boardgamegeek.com/boardgame/35046/l-aventure-mexicaine-1862-1867
Vae Victis Order Location:
http://vaevictis.histoireetcollections.com/en/publication/2070/vaevictis-79-march-2008.html
The game looks great and should allow me to fight the entire campaign and move some of the battles to the table-top to fight in with my 15mm collection of figures. You can find Engish translation of the rules on the internet, but if you do want a copy of the English rules with my edits for clarification, just send me an email.

Things I like about the game:
1) The map, although small, really looks great and gives me the campaign map I need.
2) The rules are both simple and crafted for the period. I absolutely love the 66 special events in the game. They should really make the campaign POP!

The things I don't like about the game:
1) The map is just too small (This is not Vae Victis fault as it is a magazine game). I'm going to enlarge the map to at least double size.

2) Counter art is good in quality, but has the incorrect images for the units on them. It sames the artwork is from European armies rather than the Mexican theatre, so the Austrians, Belgians, Egyptians are all incorrect on the counters. The worst is the Imperial Mexicans as they took the images of the Mexcian American war and stuck them on the counters! Uggh!

The events in the game look fantastic and I really like the rules overall. I'm not sure about the combat system yet, as I need to play the game a couple times to see if I like it.

This is becoming very interesting.

Thanks, I'm pretty excited about the entire project. The Campaign just adds more fun to the whole thing.