During E-Con (Eric's mini-convention) in early August, we fought a simple French vs Allies SYW battle, but I didn't take a lot of photos so I haven't written about that. It turns out we fought 3 more battles after that. The first one was the Battle of Reichenburg with a Twist, which I blogged about here.

The second battle was a massive affair pitting my Austrian army vs my recently based and labelled Prussian army, which is the subject of this blog post. Duan was the Austrian commander (rolled up Skilled), while Frederick was the Prussian commander (rolled up Superior). This gave the Austrians and extra Brilliant Leader card and the Prussians 2 extra Brilliant Leader cards in their deck. For those of you not familiar with Piquet, a Brilliant Leader card allows you to turn that card into any card of your choice. Maybe you need a Cavalry Move in Open, or a Musket Reload card, or maybe a critical Maneuver card. It is your choice and can really make for some dramatic moments.

This battle lasted over 2.5 weeks of game nights. This was mainly due to having only two players show up the first week, where they had to both draw their Army Characterization decks, but I also have them maneuver onto the field of battle. This can take some time and the third battle was started with the armies characterized and deployed ready for battle. (I'll post another report soon on that battle).

As you can see the players came and went during this three week scrum.

Unit markers. I was trying some new metallic markers that would stay with the units as each unit has a magnetic base. This means you don't have to remove stands (love this) or pick up status markers when you move a unit.

The Austrians had the larger army, but this was an early war battle so the Prussians have the possibility of having better quality (depends on their die rolls). I left all the units unrated, so that commanders wouldn't know the final ratings of a unit, just whether they were elite, regulars, or trained militia. All the players really enjoyed this as it provided extra stress when the units were finally committed to battle.

Before we begin I must say that Brian (Frederick) rolled out of his mind this game. He believes he used up "10 years of dice karma" in the two weeks he played. I've known Brian for about 25 years and I would agree with this assessment!

Below you can see Jan (center opposite side of the table) deploying his massive Austrian army. This was the first time Jan has maneuvered an army onto the table and he would end up with traffic jams all night long trying to get folks into battle lines. Meanwhile, Brian has been playing Piquet and SYW for 20+ years with me. 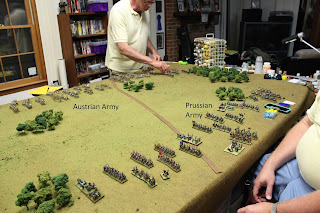 As the armies move into their positions on the battlefield Brian deploys his Heavy battery on the only hill large enough to see over the top of other troops. He then declares his battery is firing to catch the Austrians before they can complete their deployment out of columns. He rolls for his unit quality and rolls a natural 20 on a D20!!! This is a D12+1 unit for fire! Brian then proceeds to not hit a thing with this battery on the next three die rolls! However, the Austrians will become scared of this beast and do everything in their power to avoid it the rest of the battle. 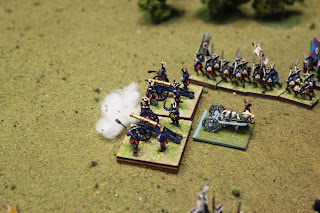 Jan's center infantry commands struggles to find enough room to deploy, but his batteries unlimber and destroy the other Prussian heavy batter before it can limber! Frederick is not happy! 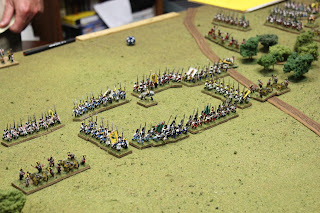 Here you can see both armies have nearly completed their deployment. In the middle you can see two black casualty markers in the Prussia area near the road. This was the destroyed heavy artillery battery. 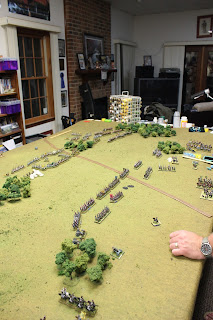 The Austrian left wing, overflowing with men and horses! That is a CLASS III woods to the right. 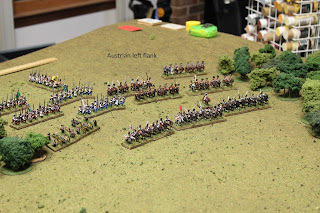 Frederick plans his attack in the center while delaying on the flanks. 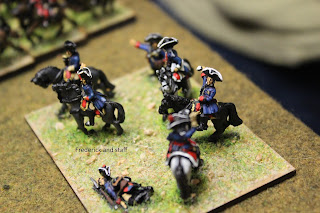 A view from the Austrian center looking at the Prussians advancing. 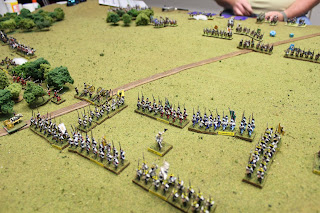 The Prussians advance their two infantry commands in the center (on the left the combined Grenadier-Fusilier command, and the Musketeers on the right) 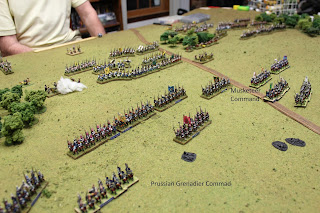 Brian splits off the 1/20th Grenadier to threatened the overwhelming Austrian cavalry brigade. 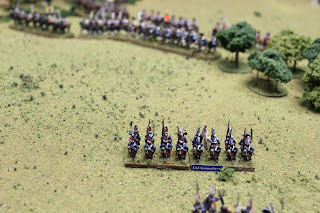 The Prussians take casualties advancing through the artillery fire, but the Grenadiers manager to destroy the Austrian heavy guns with musket fire. 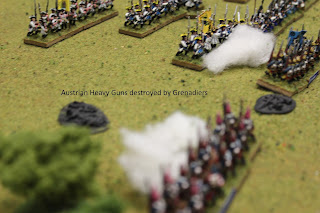 In the center, the Musketeers destroy the Austrian light guns with volley fire. 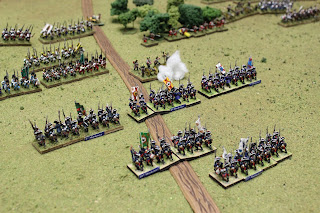 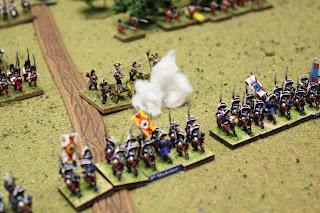 More of the Fusiliers get into the action, with point blank fire cutting through both side's regiments. 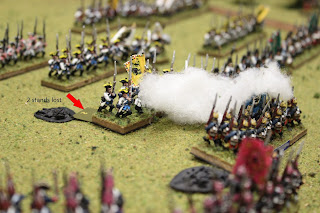 The above photo was the last I took on the first night. Both sides were poised to pounce on each other. Then came night #2 and boy did things change. The Austrian left became confused and ordered a redeployment of the entire left hand brigades (both infantry and cavalry brigades) to move to support the Austrian counterattack in the center. This left only 2 cavalry and 1 heavy artillery to hold the line while the rest of the contingents begin to maneuver away from the Prussians. The right wing Prussian commander, seeing this vulnerability, decides to commit the entire Prussian cavalry wing, plus the Prussian Hussars in reserve to an attack against the Austrian left wing. They catch the Austrians napping and overrun the heavy guns (Heroic Cavalry Move in Open + Melee), then route the two remaining Cuirassier regiments protecting that flank. Here is the first photo of the night showing the black casualty markers (that is where the battery was when the Prussian Cuirassier overran them), and the same unit hits another Austrian infantry unit in the flank and wipes them out! 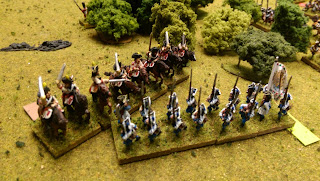 In the center, Jan's Austrian Grenadiers are laying waste to the Prussian musketeers. Check all the casualty markers in the photo below. 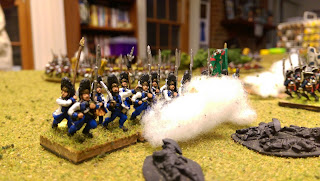 Here you can see the overview of the Austrian left wing. The Prussians are attacking from both the front and flank and this will bode evil for the Austrians 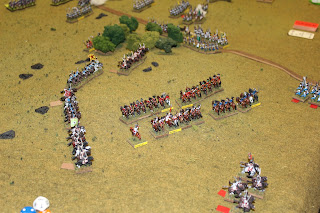 The Austrian Cuirassier hit in the flank and rout. 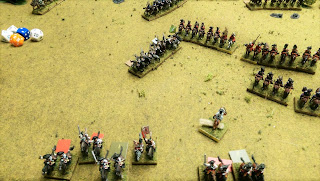 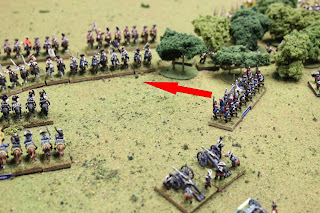 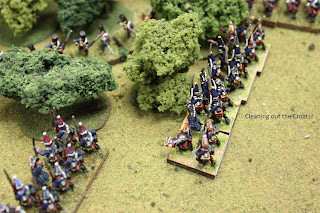 The croats are silenced with little effort and the 1/20th moves forward and fires in the Austrian cuirassier and routs them. 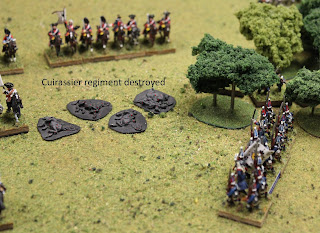 Seeing the chance for victory on both flanks the Prussians launch into the Austrians on their left flank. 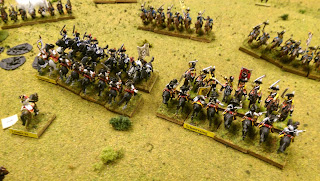 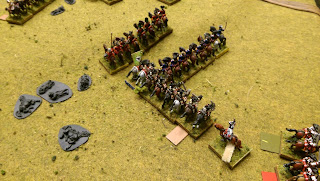 In the center the Austria inertia has limited their advance and the Prussians hold their ground in the center, but most of the Prussian Musketeers have been crippled. 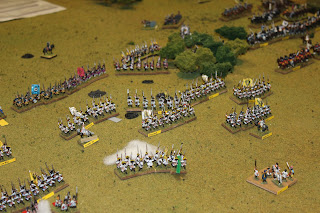 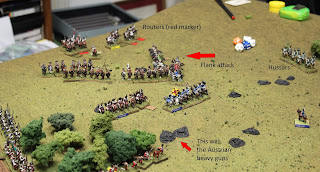 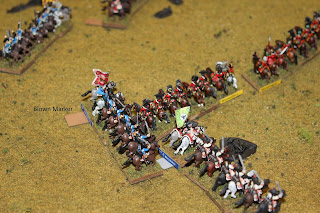 Austrian morale is near zero and they manage to bring a fresh infantry battalion to bear against the Prussian Cuirassier, only to miss with their first fire at point blank range. 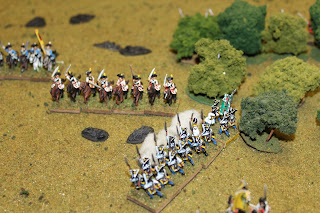 Austrian morale collapsed at this point and we called it a game! Some really amazing drama in this battle and Frederick administered a serious ass whipping in this one.
Posted by Eric Burgess at 6:27 PM