I've had the Great War Spearhead II rules for several years now along with all the nice scenario books and I decided to try to run a game and see if our group likes these rules enough to keep using them. I haven't broken out my WWI figures in a while, so I thought I would give this a go.

The rules are well researched and I like how that the maneuver element is the regiment and each stand is a company. The companies can maneuver freely within range of the Regimental HQ once the enemy is encountered and fog of war is simulated via written (drawn actually) orders, spotting rules, target priority, and order change difficulty.

Phil and Jan will be the Russians while EC and EB will command the Germans. Roughly 1 division per side in this meeting engagement. This is loosely based on the RACE TO THE SEA scenario in the GWSH2 rules. All artillery will be on-board with one "brigaded" regiment for each side, while the rest of the batteries will be directly attached to the regiments and will fire over open sights.

Victory points were awarded for control of each village in the middle (Bossau and Soldau) and per enemy regiment broken. I'm going to look at adopting some victory conditions from the GWSH2 Scenario designer for our next game. 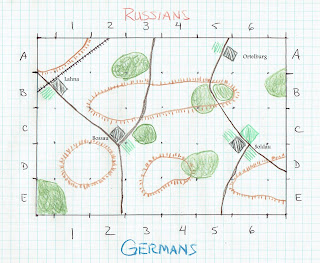 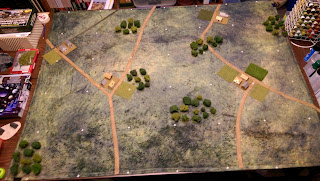 I was originally hoping to just snap a photo and print it out for the map orders, but you can't see the hills in the photos on my new Cigar Box plush terrain mats. So, I drew out the map after I had setup the table. Players will draw arrows on the maps to indicate their plan of attack and defense. I think this makes you feel more like a general than a regiment command, and I think that is great. 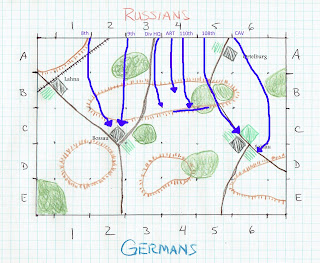 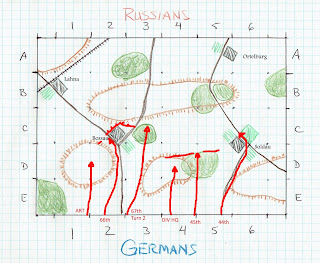 What is interesting in GWSH2, is that your regiments move on orders so there is little in the way of thinking that has to go along with their movement until contact is made with the enemy. Most of the real brain burn is in the initial orders. 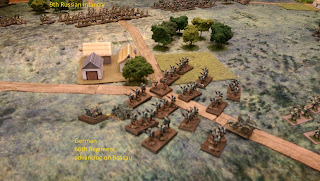 A wider view of the initial movement 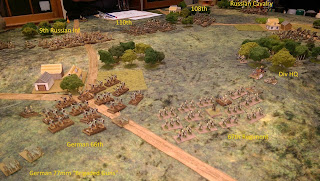 Below the Russian cavalry attempts to flank the Germans in Soldau. 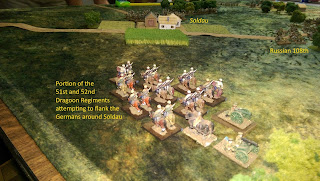 This is nice shot of the 108th Russian infantry regiment storming across the hill and through the woods during their assault on Soldau. This would prove very costly for this GREEN regiment. 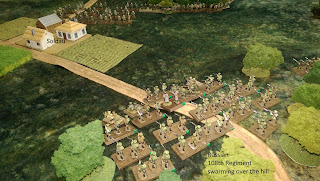 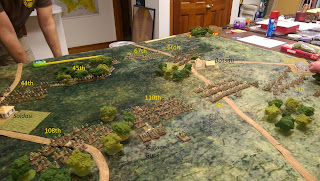 My German Brigaded 77mm field gun batteries started hammering the Russian 8th and 9th regiments where their battle orders intersected. The first bombardment was not that effective, but the 2nd and 3rd were telling. 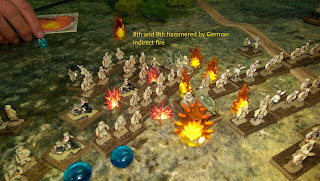 Meanwhile the Russians bomb the 44th German Regiment in the open and have great success at destroying the German infantry, much to my chagrin. 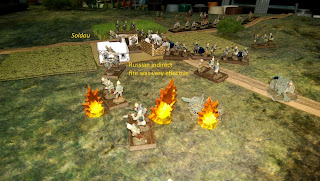 View from the Russian side as the 9th heads towards Bossau 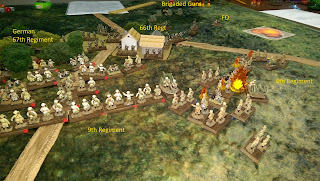 The 110th Russian regiment begins to move to their left to protect the flank after the 108th regiment was broken. 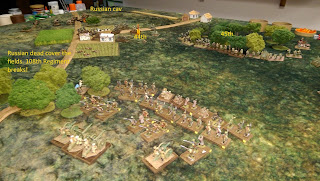 Massed pile of Russian casualties in front of Soldau. 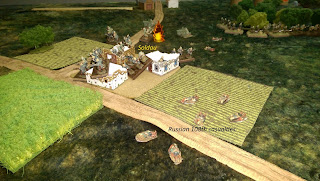 At this point the Russians were unlikely to win as both villages (+2 vp each) and 1 Russian regiment (+1 VP) was broken, and no German regiments had cracked yet. We called it an evening and discussed the game and rules.

After Thoughts
This was our second playtest of GWSH2, with different players in each game. Same scenario. Here are my reflections on the rules, both pros and cons. I've enjoyed the rules enough to continue my game play and scenario testing.

Cons of GWSH2:
Look for my next playtest with the Turks defending against Russian counter-attacks in the Caucasus mountains in December 1914. Since this will be an Attack-Defense scenario this will give a set of different challenges. (Snow, Mountains, etc). The true test will be if I can break out my late war armies for trench assaults and see how that works. I have Austrian, Russians, Germans, and USA armies, while Brian has late war British and French (and some Italians too).