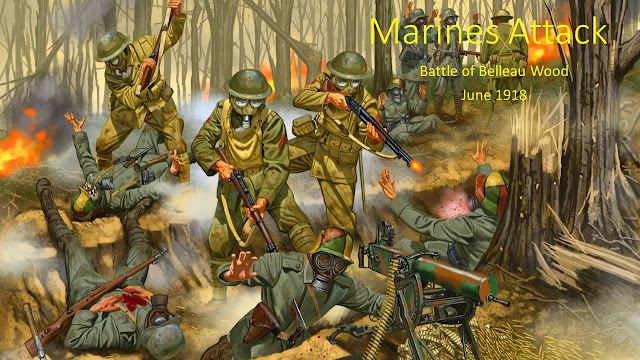 I've been trying to get my USMC\US Infantry on the table for a while now. I finally got enough based and flocked to refight the Battle for Belleau Wood on June 6th, 1918. The woods would not be completely cleared for another 3 weeks in the real war, but I wanted to see how it would pan out in our wargame room!

Lately, I have been trying out new rules like Great War Spearhead 2, and this time I wanted to try TAKE ACTION! by Steve Gelhard.

I've played these rules twice at Historicon, but it has been two years since I've played them. One disadvantage is that the rules are just the two page Quick Reference Sheet with nothing else written down. This makes it a challenge when the rules writer isn't part of the local group when questions come up during the game. :-)

So, Brian, Phil, and Mike J. tried them out in the hallowed ground of Belleau Wood.

I used part of the map from the GWSH2 Belleau Wood scenario (which is a scenario of the opening German attack against the French and USMC). It was odd to have so many forces concentrated in one area of a gaming table, like we did for Belleau Wood. Bonus, this is the first time I have put my US troops on the table top! 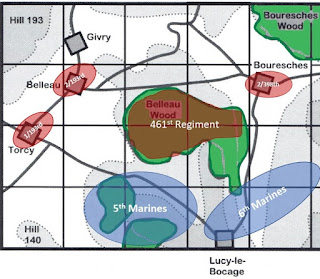 The first four photos give you a lay of the land along with unit names and locations. The main objective for the Marines was to take and clear Belleau Wood, with a secondary objective of the town of Bouresches. This was their real-life goal on June 6th. 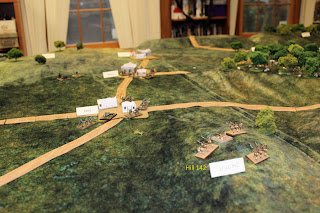 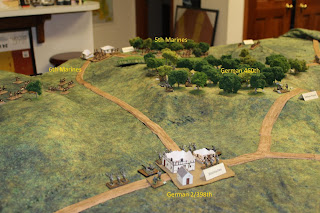 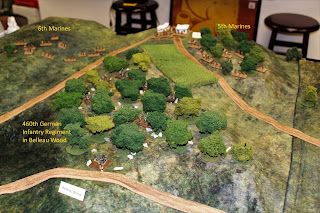 Below the 5th and 6th Marines attack directly into Belleau Wood, you can see the orange (shaken) markers on the Germans from the US\French pre-game barrage. 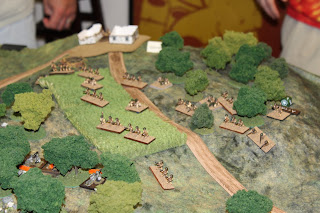 The companies of the 6th Marines dash through the ravine and up the hill into Belleau Wood. 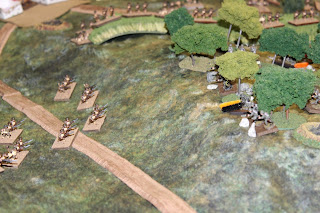 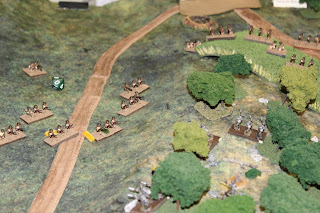 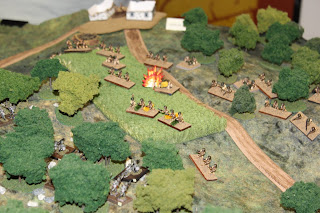 Here you can see the rocky nature of Belleau Wood and the dual pronged attack by the 5th and 6th Marines. 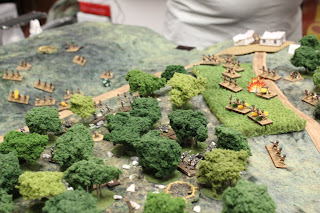 Marine MGs have begun to pin and damage German infantry dug-in too close to the edge of the woods. A defense in depth would have been a better choice for the Germans in hindsight. 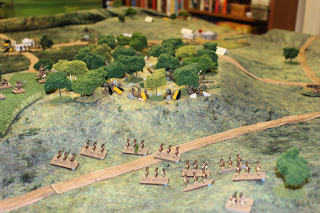 6th Marines go in with "cold steel"! This was a vicious battle with most of the heavy lifting done by the 6th Marines via close assaults. 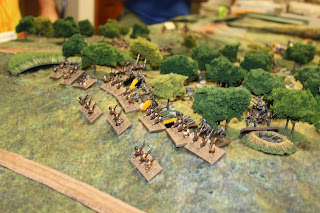 The Germans, on the right flank have decided to bring a battalion of the 193rd regiment forward to harass the 5th Marines (who had terrible activation rolls). 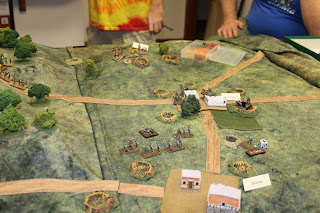 The 5th Marines bogged down due to enemy fire and poor activation rolls. 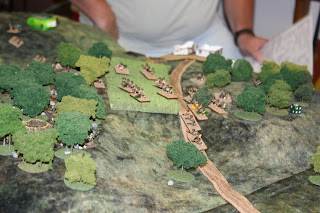 The 6th Marines (Brian's command) slogs through the woods taking and giving casualties. 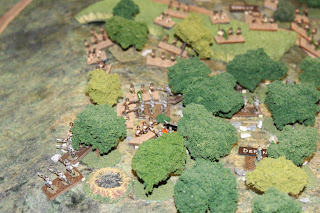 The edge of Belleau Wood is nearly cleared by the 6th Marines. 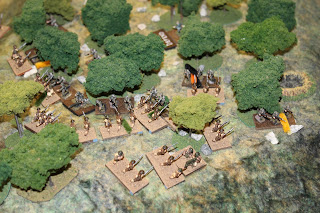 Marines and Germans maneuver for an edge and flank in the woods. 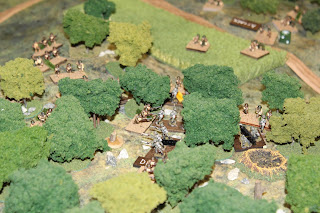 Here, you can see the carnage and the nature of the close assaults. 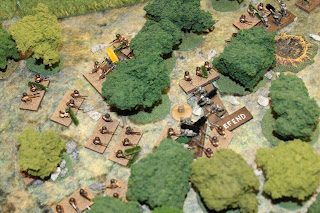 The Germans, in desperation, move the 1st Battalion of the 398th Regiment towards the 6th Marines. Too little, too late. 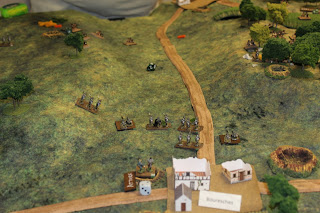 The Germans try to take back Hill 142 (140 on the map) and the Marines actually charge down and engage them in close combat wiping out a company of the 193rd German Regiment. 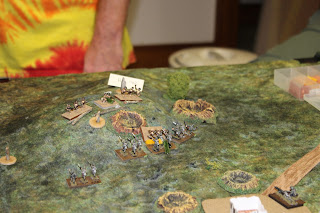 The last stand, here the Germans in Belleau Wood are overwhelmed! 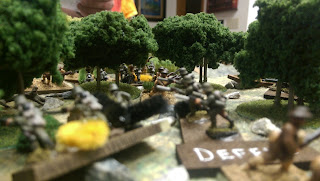 This was a great victory for the US Marine Corps! Belleau Wood was nearly completely cleared when the German morale collapsed. The casualties on both sides was horrendous.

We had a lot of fun, but hope Steve can write the rules so that we don't have so many unresolved questions during the game.

Nice job on this, Eric, and congrats on finally getting the Marine onto the tabletop!

Looks like a fun game. I've played Steve's Take Action rules at Historicon. Do you know where I can get a copy of them?

@Ben, as far as I know Steve hasn't published them.

Do you have a copy that you could share or a way for me to contact him? My email is bengrace2017@gmail.com.

@Ben I'll send you an email with Steve's email.