Sorry for the long delay in posting this. I'm not sure I will remember all the details, but we had two very enjoyable games of Din of Battle 2nd Edition, featuring my 15mm Boxer Rebellion collection. Most buildings were made by Mal Wright. I made the Mud Fort (still need to finish it up). Temple is an aquarium piece.

There were two distinct battles going on in the scenario.

Americans and French attacking a Imperial Chinese held mud fort, while Russians and Italians tried to save the local Christian Mission from being overrun. The International forces already tried to evacuate the Mission with Royal Marines, Russian sailors, Italian Sailors but a large Boxer for appeared out of no where and they were trapped!

There were four commands, each with their own sequence deck:

We fought this scenario twice over a two week period. I'm only posting photos of the first battle as the 2nd battle was relatively the same, but the Boxers didn't win the second battle. 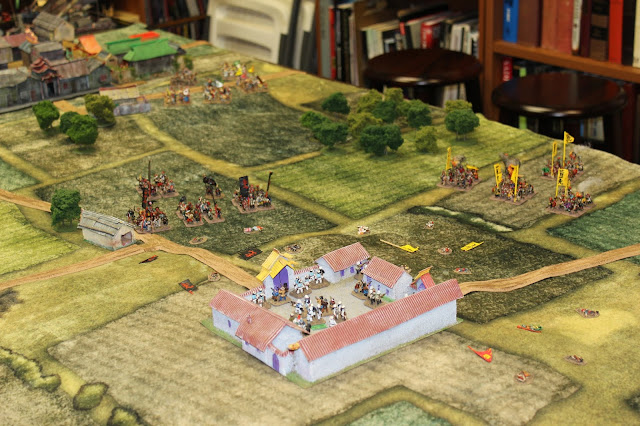 Russians and Italians ready to advance and relieve the Mission from the nasty Boxers. 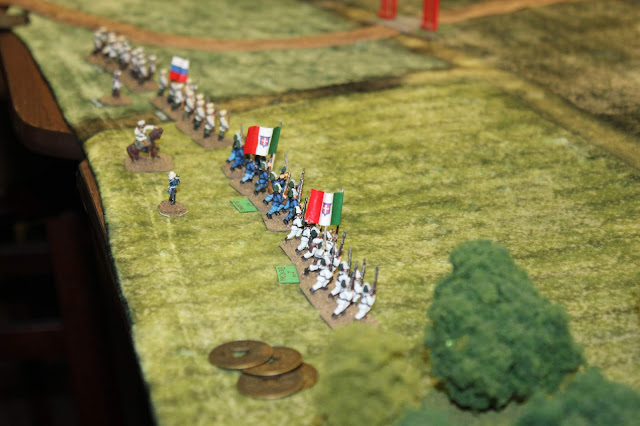 The Chinese mud fort guarding the busy harbor while US forces on land and French Marines on paddle wheeler troop transports prepare for an amphibious assault. 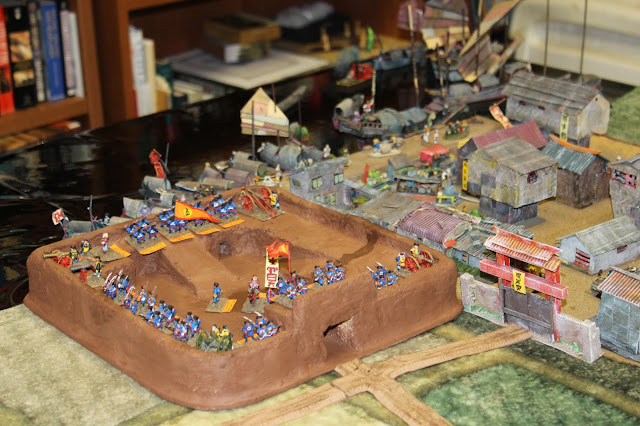 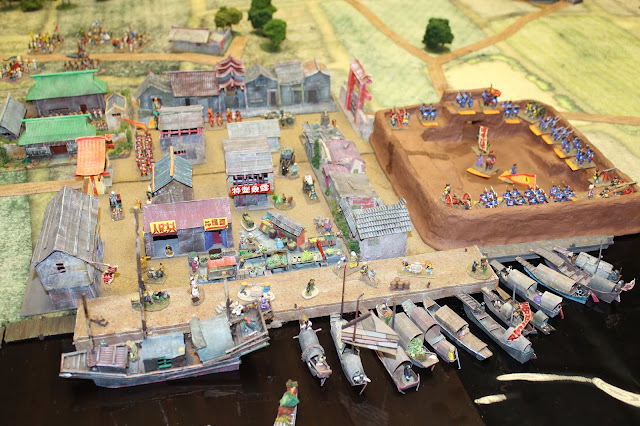 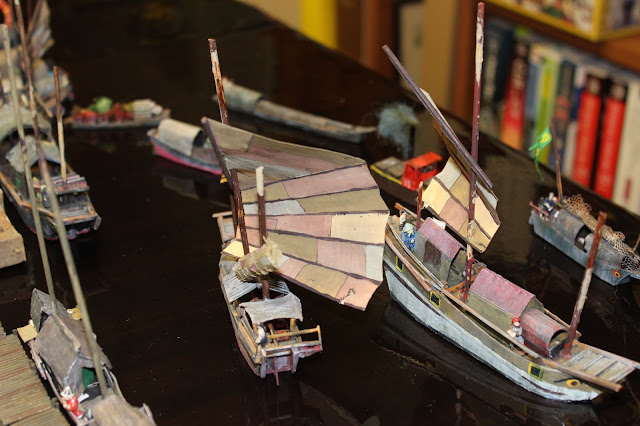 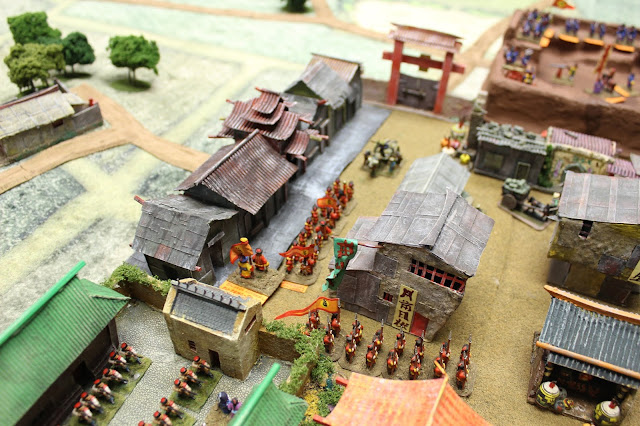 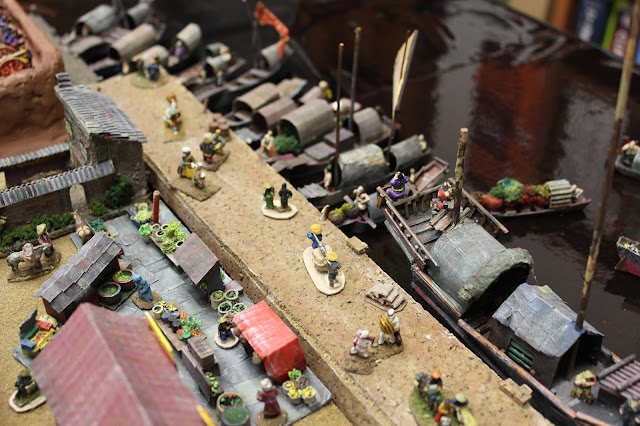 And the Boxers launch their first assault, with casualties everywhere. There were Russia sailors, British Royal Marine Light Infantry, French sailors, and Italian Navali Regina in the Mission. 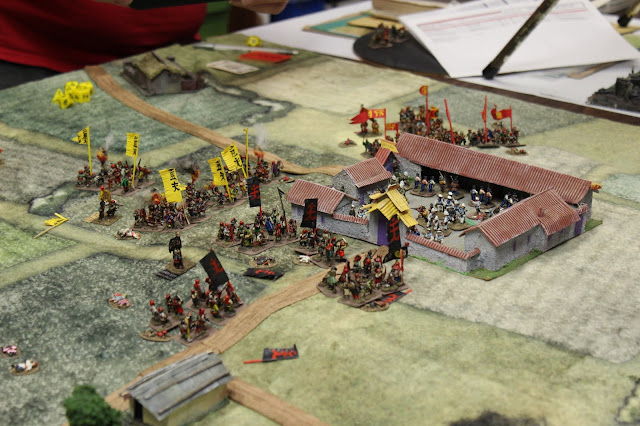 Here you can also see that there is a RED Banner force of boxers heading for the mission. 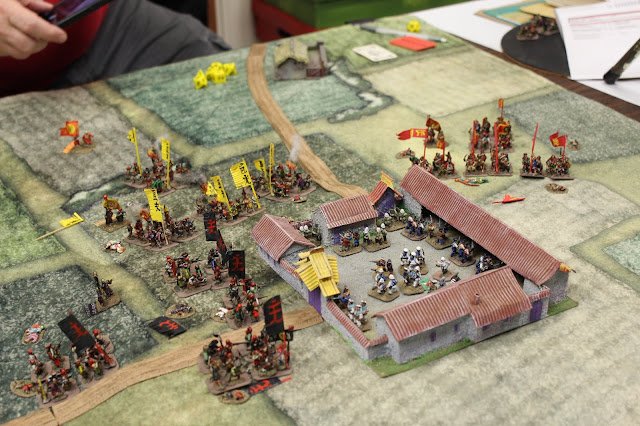 Can the Russians and Italians get there in time? 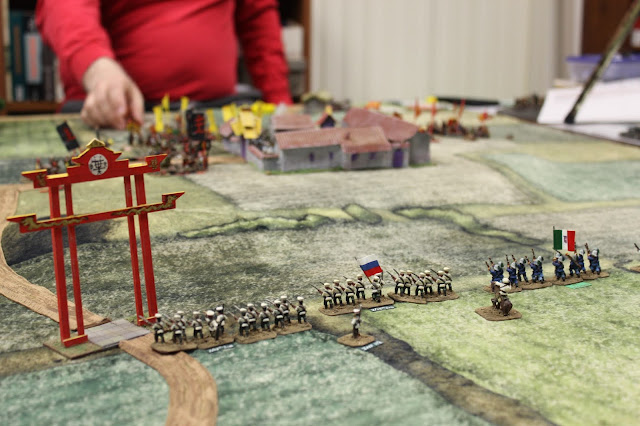 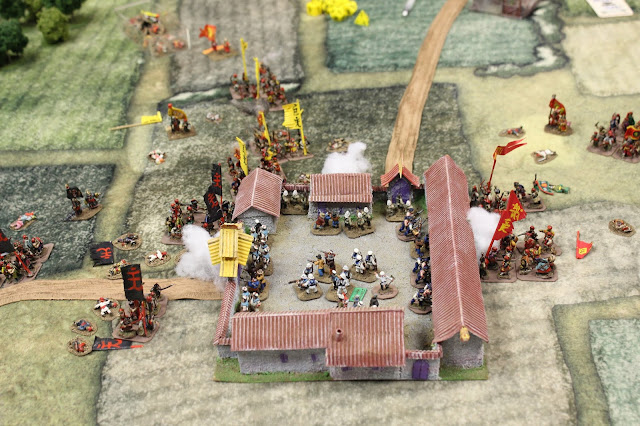 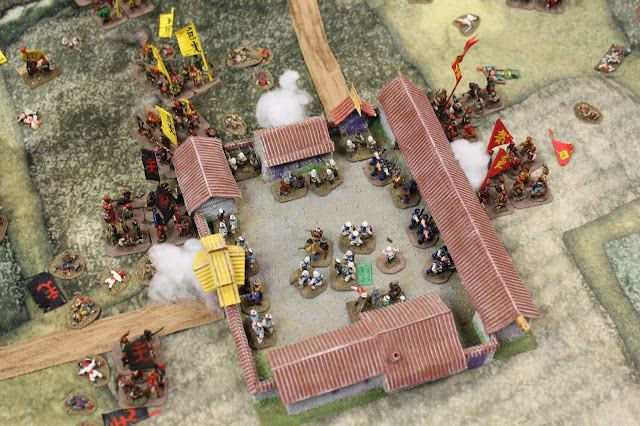 Men are tested to their breaking point! 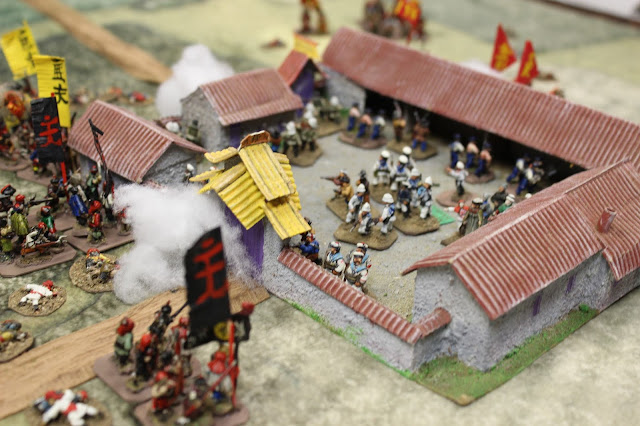 US Infantry and Marines start their attack on the mud fort. 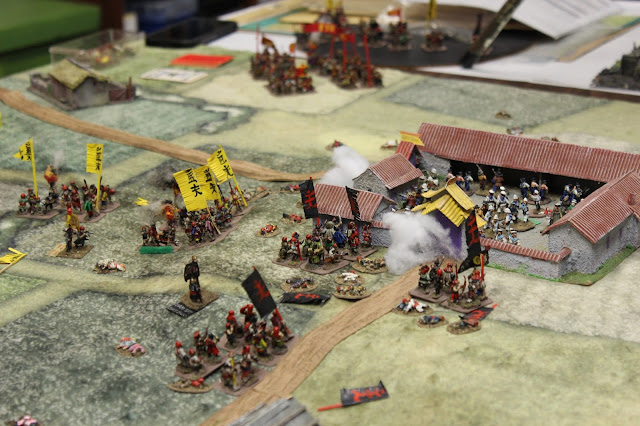 French landing force arrives, but is too far from shore to support. 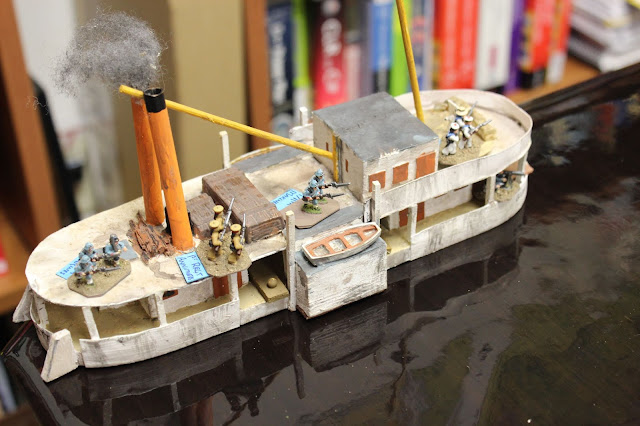 There is a Russian gunboat also shelling the fort. It is barely visible in photo at the bottom right. 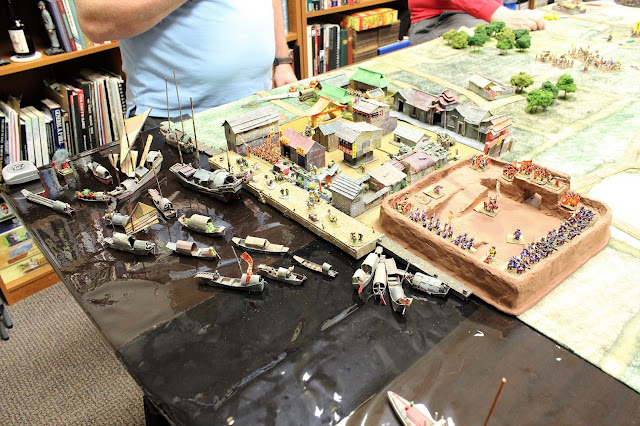 Boxers breach the walls where the French sailors are defending with armed civilians. 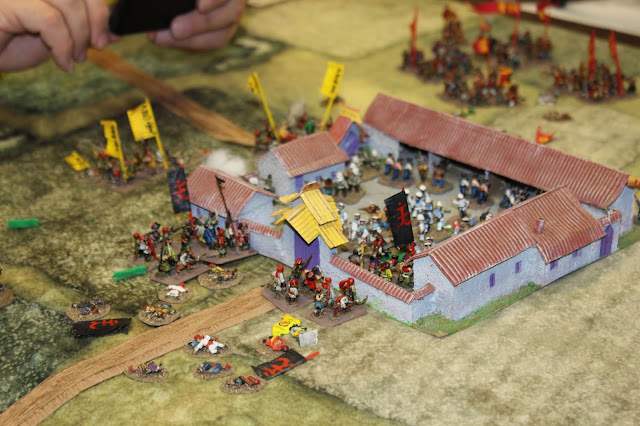 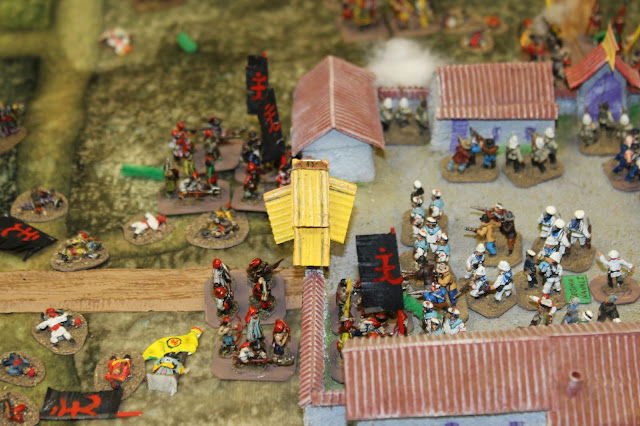 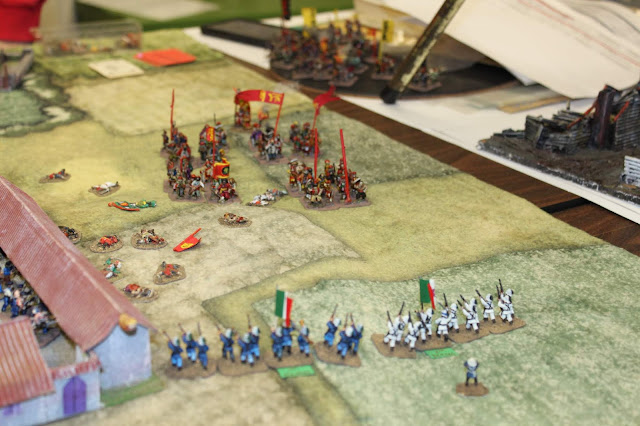 RMLI pushed back by Yellow Banners. Italian Regina Navali take over for the French and rout the Black Banners. 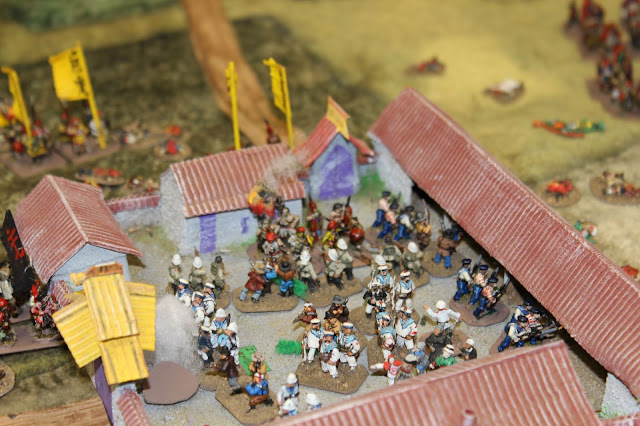 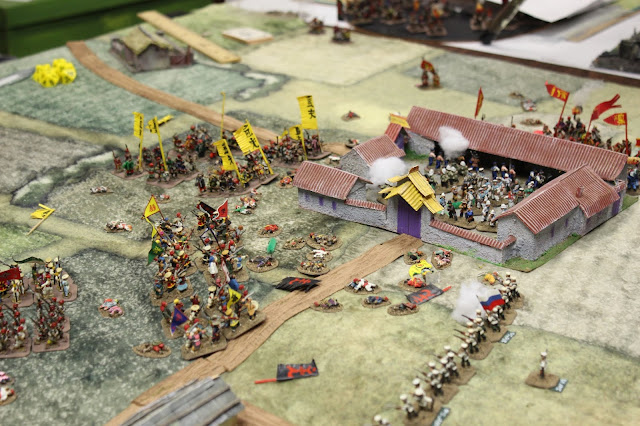 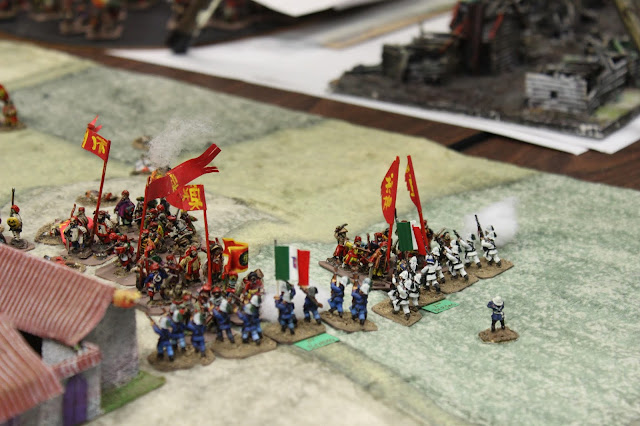 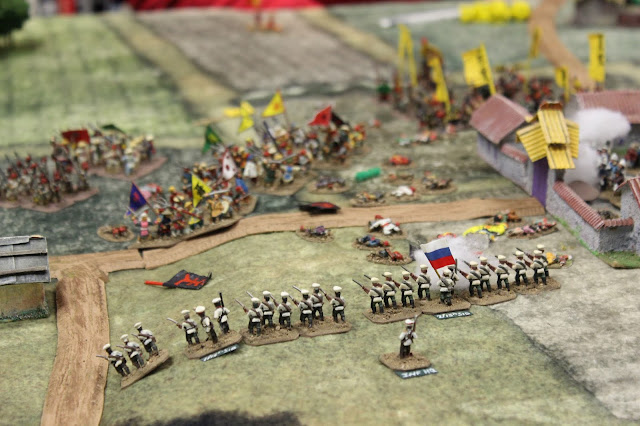 More hand to hand fighting outside the mission. 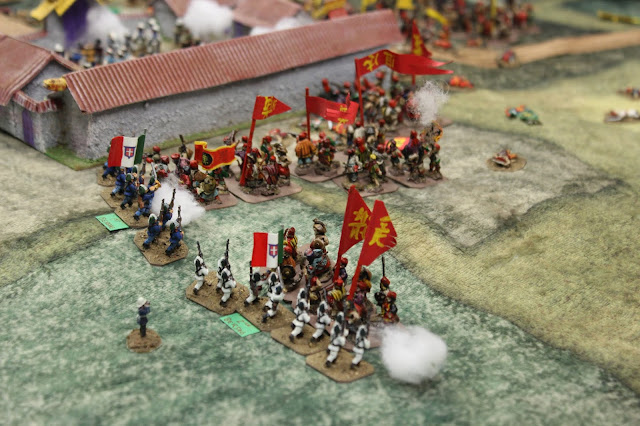 Massive attack by the Yellow Banner boxers (Each banner was reconstituted once to give the Boxers a better chance). The RMLI is driven from the wall and you can see all the yellow banners in the Mission. 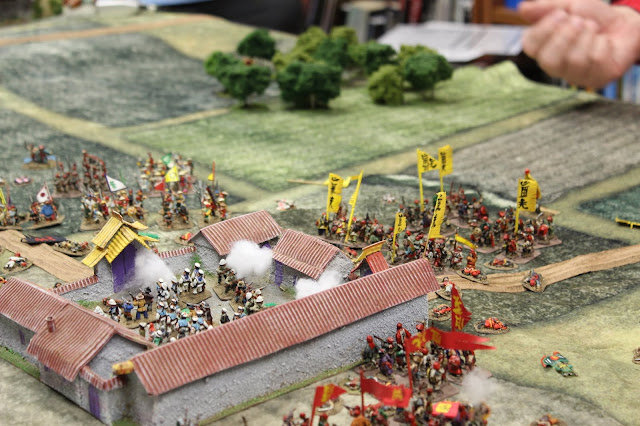 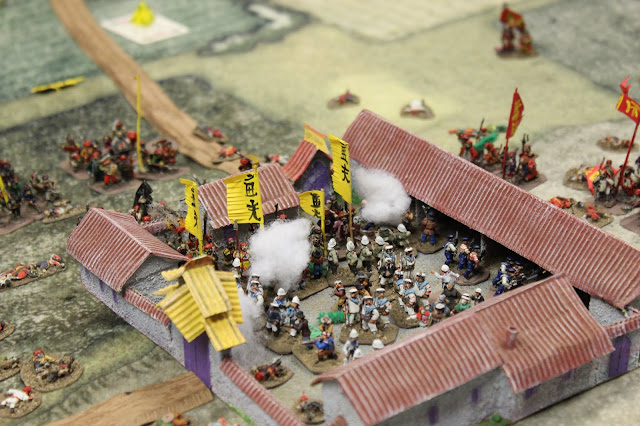 It is over, the Boxers have driven the French, RMLI, and Italian sailors from the walls on three sides, while the Russian and Italian reinforcements are too little too late. 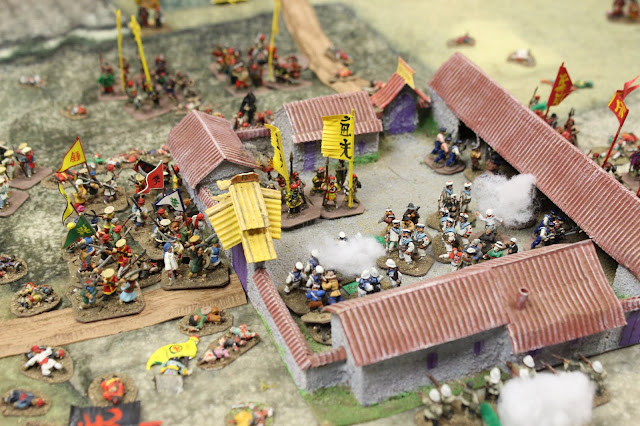 Phil, the Boxer Commander, wins a metal (Boxer Rebellion medal I purchased) and will be rewarded by the Emporer for his glory of destroying the mission! 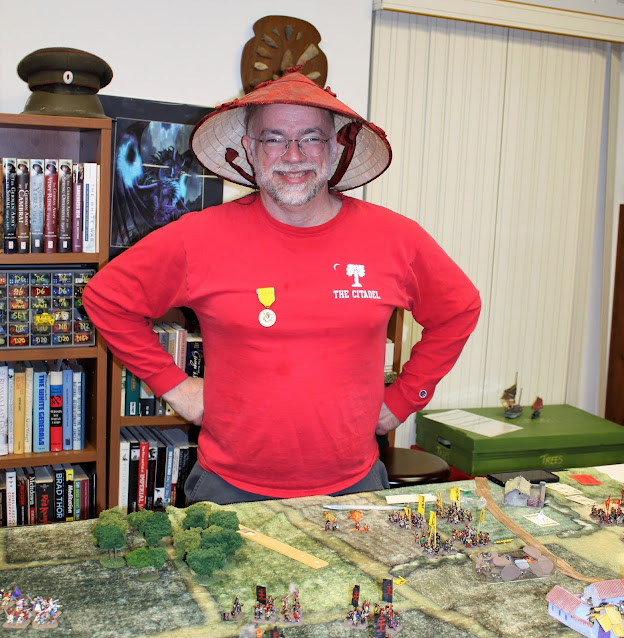 Truly fun game! The Americans were defeated by being over-zealous on their assault on the mud fort so this was a total Chinese victory.
Posted by Eric Burgess at 12:33 PM

Colorful as always, Eric! It really does look like China too with all the boats and terrain. Always enjoy your posts.

What a great looking battle and awesome AAR! Would you be willing to share the scenario specs and map so we can play this battle as well?
Cheers,
JB

Very colorful and my favourite subject. From where are the boats?

Uwe, Mal Wright scratch built all the boats. He is an amazing terrain maker.