Wedndesday night Hal, Jan, and Jon joined me in my first playtest of Puebla for Historicon.

I don't have time to write up a detailed battle report, but I wanted to show you some eye candy from the battle.

Jan and Jon were the French and had never played miniatures before, nor Piquet, so they were under a steep learning curve. Hal, my veteran of many campaigns, controlled the Mexicans while I umpired and took notes. 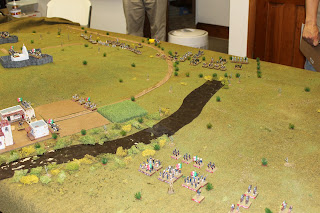 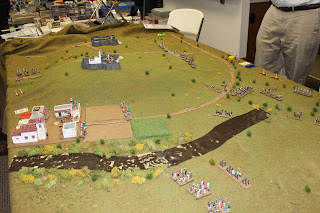 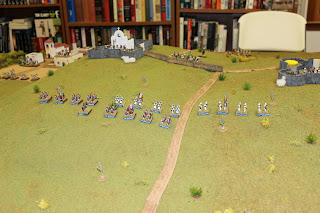 Nice view of the entire battle 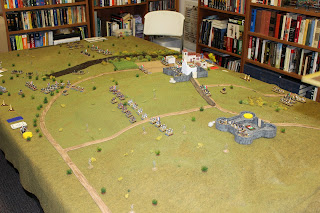 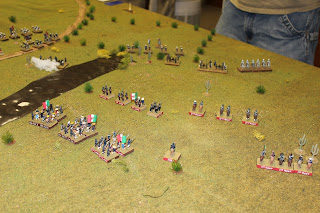 The Mexicans launch into the thin French left wing. Here a Republican cavalry unit is routed in melee by the French guns! Stunning victory for the French! 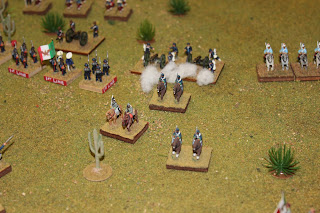 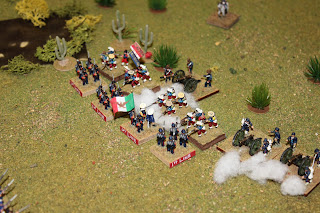 Disaster! The Blue Butchers are destroyed by flanking fire from Mexican regulars! 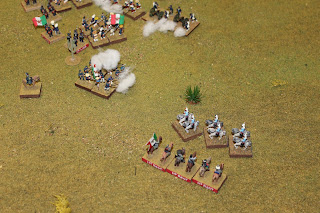 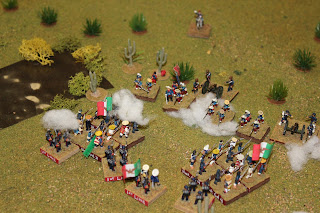 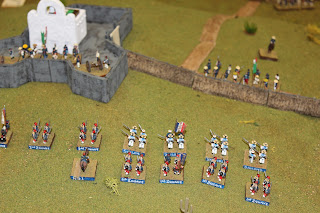 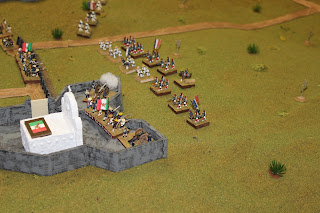 French took a beating in morale chips compared to the Mexicans and are struggling to hold their left flank, but the battle is far from over. We did call this one in favor of the Mexicans.

Overall, I'm pleased with the setup and special rules. We got a late start (8pm) and we finished around 10:30pm after two complete turns. This gave me a good idea of what I may be up against for the convention game.

Another playtest next week! Cheers!
Eric
Posted by Eric Burgess at 9:30 AM

Great looking game - tempting to add it as another period to do!

Certainly a fine introduction to Miniatures gaming for the new players as well!

Game looks real nice on the table, and the situation an interesting tactical challenge. All in all, a great 'first night' game for the new players.

It does look like a great game. Any chance of posting a map of the table? I'm still a little confused about the terrain and where particular armies are.

Having been reading an account of teh Mexican Revolution recently, this line is quite amusing taken out of context :)

Yes, it is the same Diaz from the Revolution! I did a thesis paper on Mexican Revolution called the "Tiger Unleashed."

I can try to post a map or at least doctor up the photos with information in them directly so you can understand the landscape and forces better. Should be no problem at all.

I did know it was the same Diaz. Never done a thesis, but I do have a bit of a thing going for Latin American warfare :) One of the few protagonists in the Revolution to die in bed of old age.