You held a Wargame Mini-Con Where?

First, sorry it has been such a long time since my last post. Our group has been more focused on board wargames than miniatures and it isn't a lot of fun to blog about board games.

Some of the board games we have enjoyed over the last couple weeks (and ratings):
This past weekend I had the pleasure of wargaming with miniatures with a couple of my good friends: Jim, Buck, Dave, and Nick. This is a small mini-con Jim runs up in Kannapolis\Concord NC every year.

We had a FULL slate of games over the weekend and I took Friday off to attend.

The strangest part is that we played at Jim's work location and the first games were played in the Dr. Office's attic\storage room! Most bizarre place I have ever played a wargame. 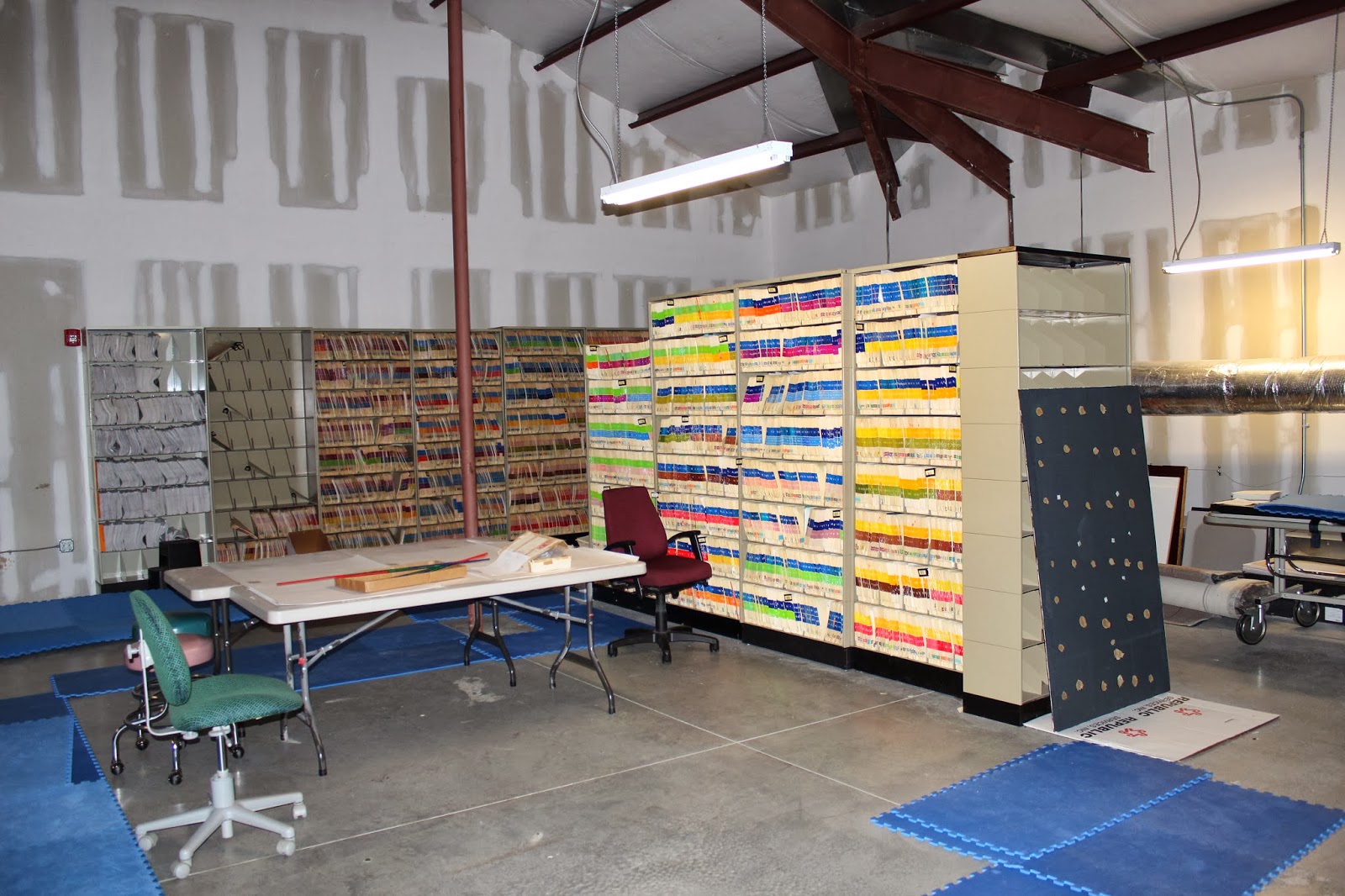 We moved to the break room after hours on Friday night and the rest of the weekend.

This was a fast paced game with six players and 54mm Marx Chariots that Buck had recently discovered. Jim played the game at Historicon so he had the rules and the basic oval track that we used. (Jim will create a much nicer version in the future).

We were able to play two races, and I was in the dashing blue chariot.

In the first race, you can see my Blue chariot in lane V, not the best location: 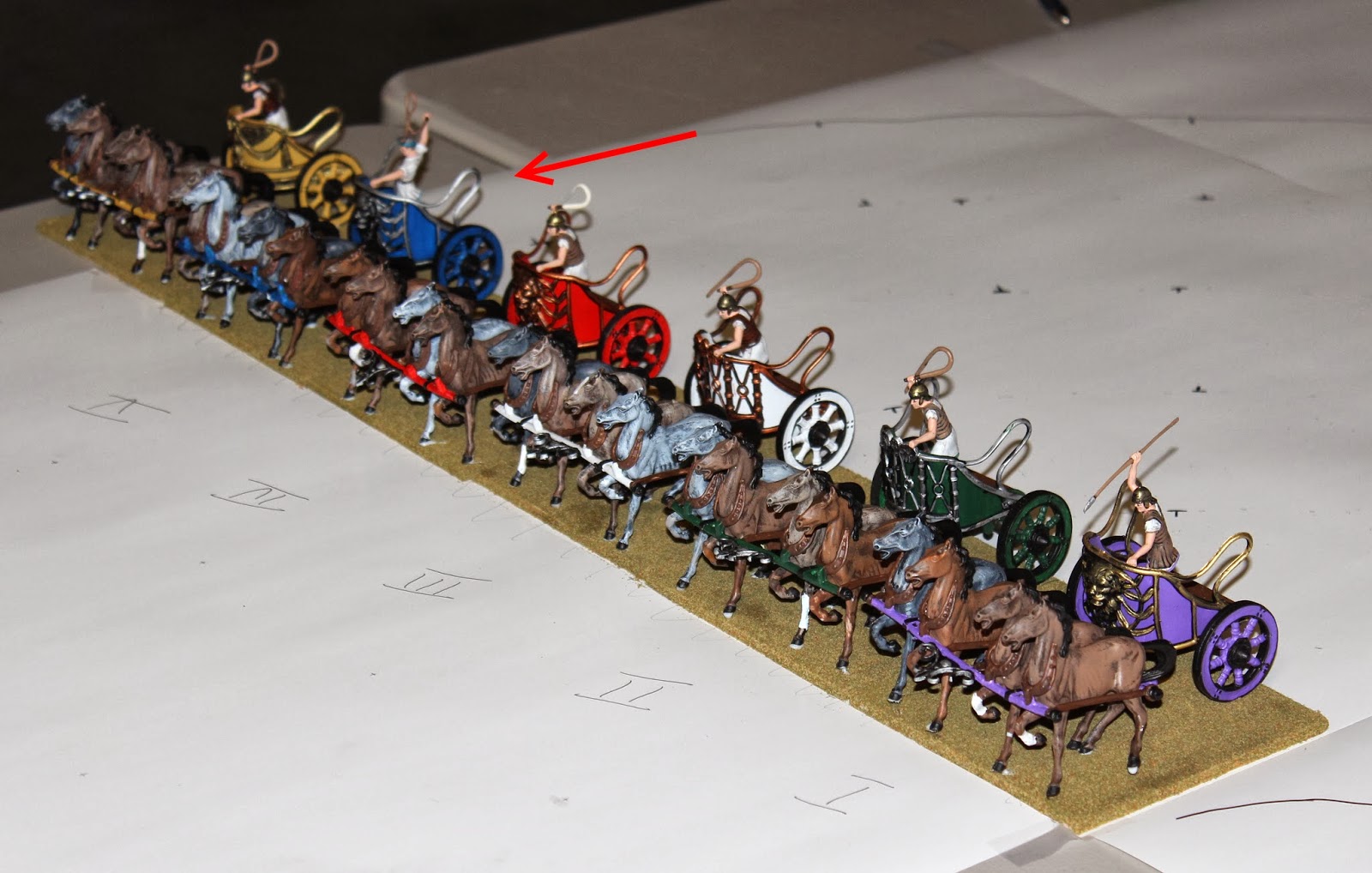 Each chariot driver can pick a special ability and mine was Fast Driver which gave me a +2 to my die roll when I was going "Fast" or "All Out". Drivers start with 12 endurance, unless they have special ability which gives them 15 endurance. If you are not draft behind another chariot at the end of each turn it cost you an impetus. Going "Fast" can cost you an impetus 33% of the time, while going "All Out" will automatically cost you impetus.

Because of my lane location I tried to get aggressive, but ended up just burning endurance and eating a lot of dust in the first two laps: 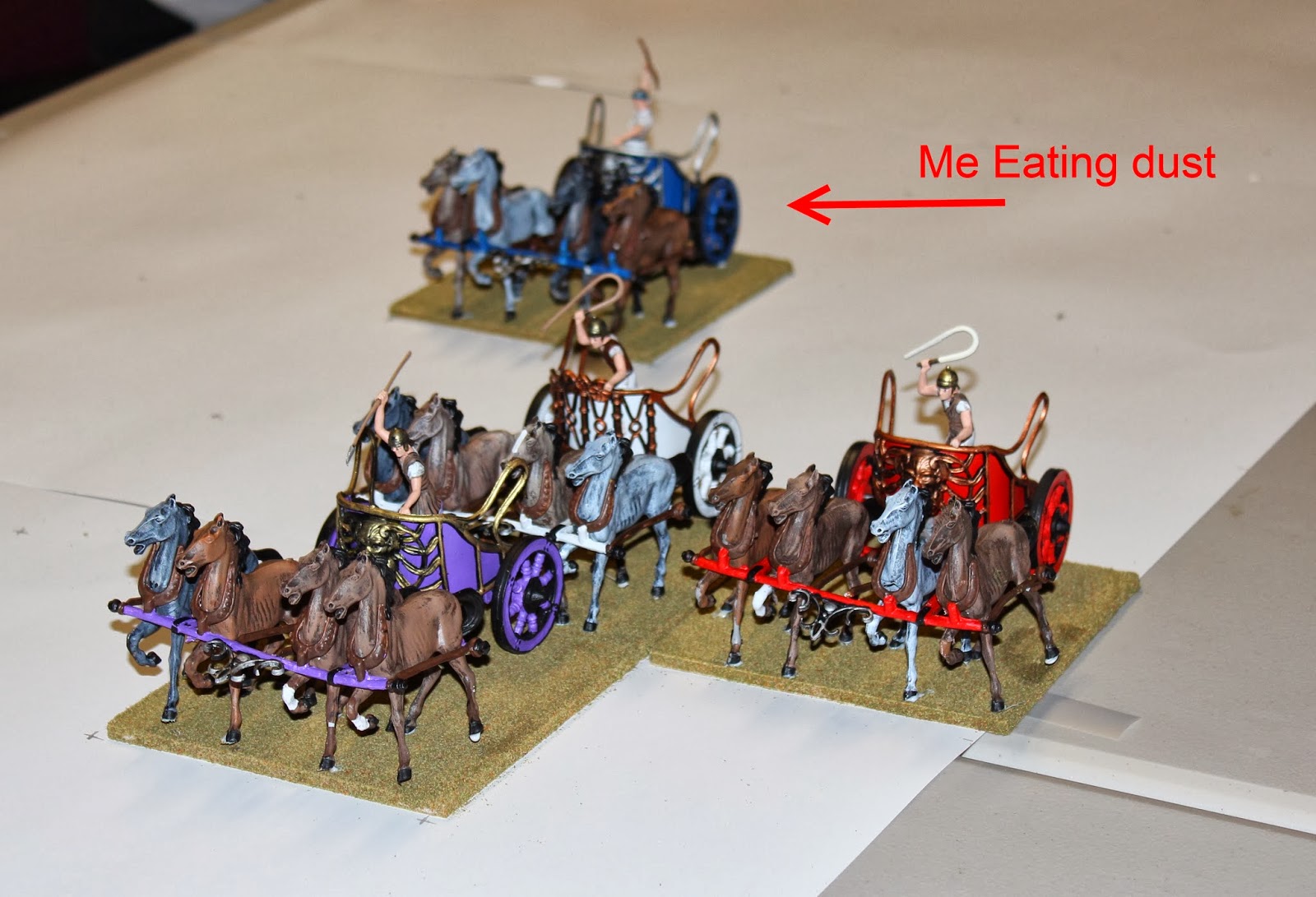 Buck's purple chariot led most of the way which cost him a lot of endurance, which eventually led to fatigue and I was able to slip past him.

The finish was neck and neck with Jim's white chariot, and I was able to slip by in the end! It is not just the first one to cross the line, but at the end the turn it is the one furthest over the finish line and if in the case of a tie, then it is the one closest to lane one. You can see here, that I just beat Jim by being in line I! 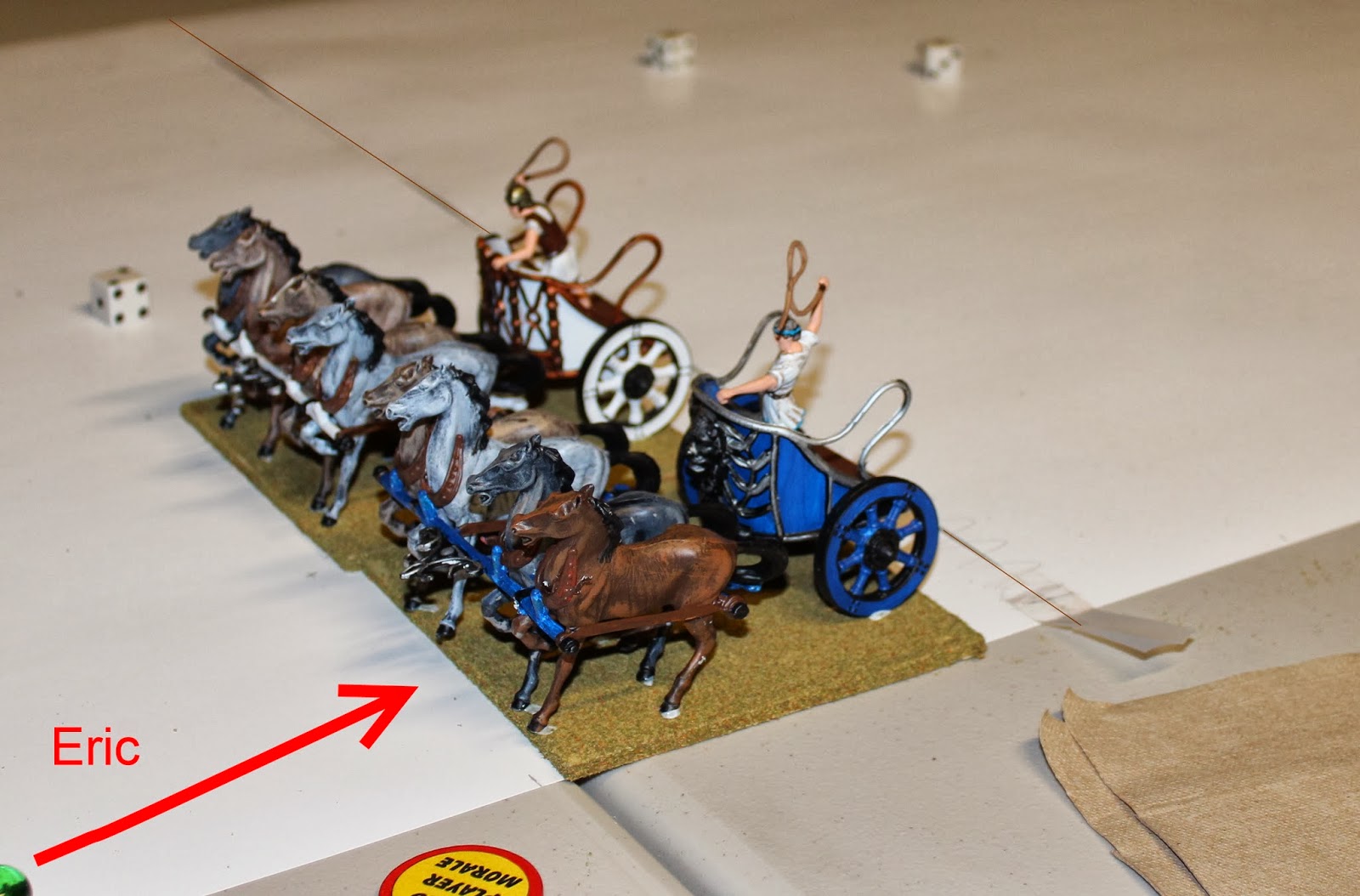 The second game I was able to start in lane III, and made sure I drafted through most of the first two laps, trying to conserve my endurance.

In the third lap I broke out of the pack and tried to take the lead. Jim was running close behind me again and we took the turns at very tight cornering (lane I). I made good decisions followed by good die rolling and was able to get a second victory of the day! The Gods of War must be smiling on me!

Here is the final stats for the second race. I came across the finish line a full turn before the others, but Dave (Green Chariot) was able to slip past Jim for a nice 2nd place finish. 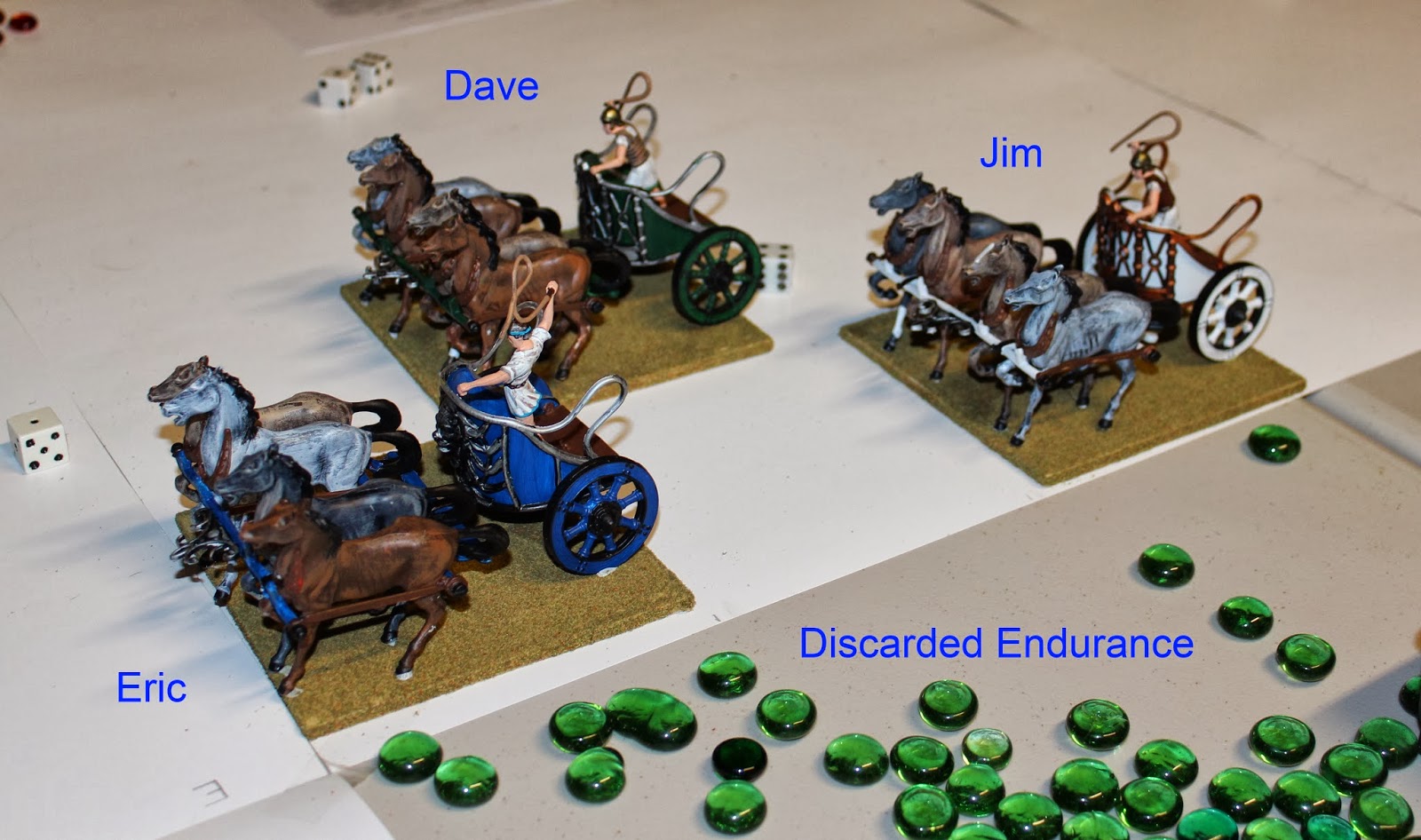 I would highly recommend the rules and if this is being run at Historicon this year, I definitely want to get in on the action.

After wearing out our horse in the Roman coliseum we moved to 10mm Fantasy battle. This was a massive 6 army battle with six players, and 3 armies per side.

I was in command of the Goblin army on the right flank of the line. I had 6 very poor Goblin infantry units, and about 10 or so Goblin Wolf riders, plus a Shaman tossed in for good luck. I was facing on of the Elvish armies which was composed of almost all lanced armed cavalry. So it was quantity versus quality on my flank.

I'm pleased to say the forces of evil were able to hold off the attacking deformed Elven armies and their lackey human allies and win the battle.

Initial deployment, and how the Evil armies went on the offensive (jimmy leading the way!) instead of waiting for the Elves to attack: 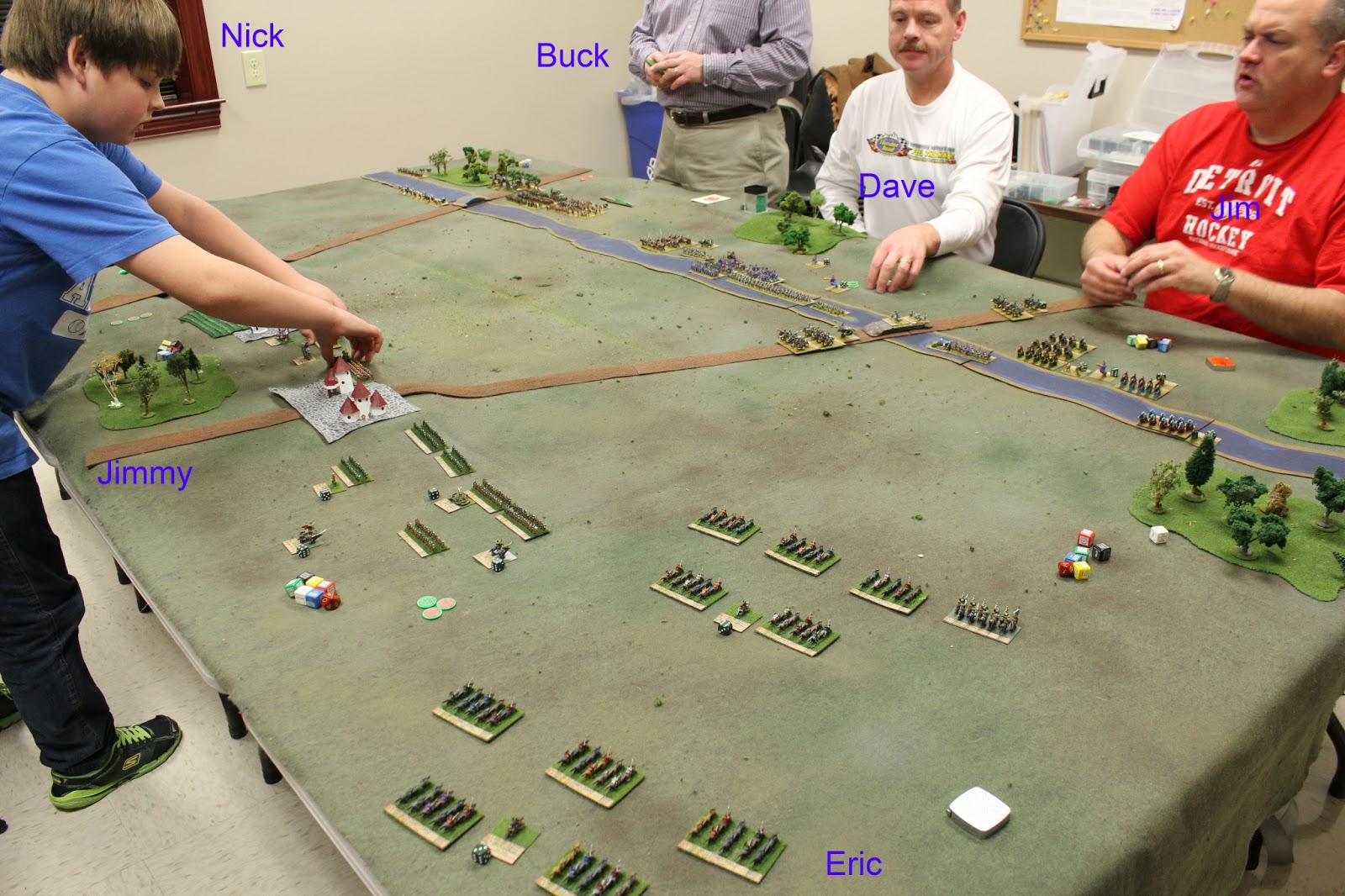 Overall battlefield, with my Goblin army closest to the camera.

Below is two High Elf lancer regiments, with a commander riding a Giant Eagle. 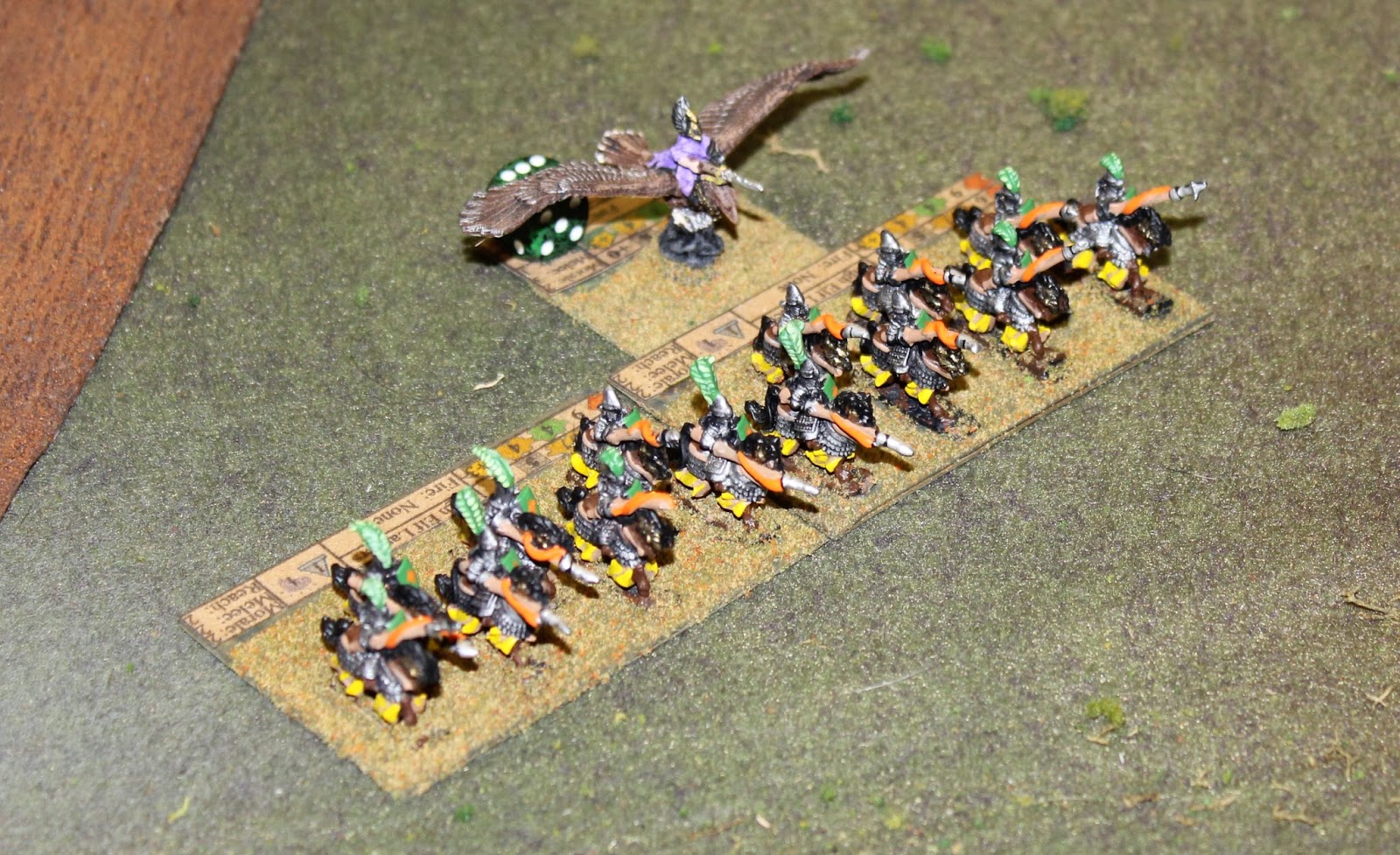 You can see my wolve riding goblins charging into the Elven line. 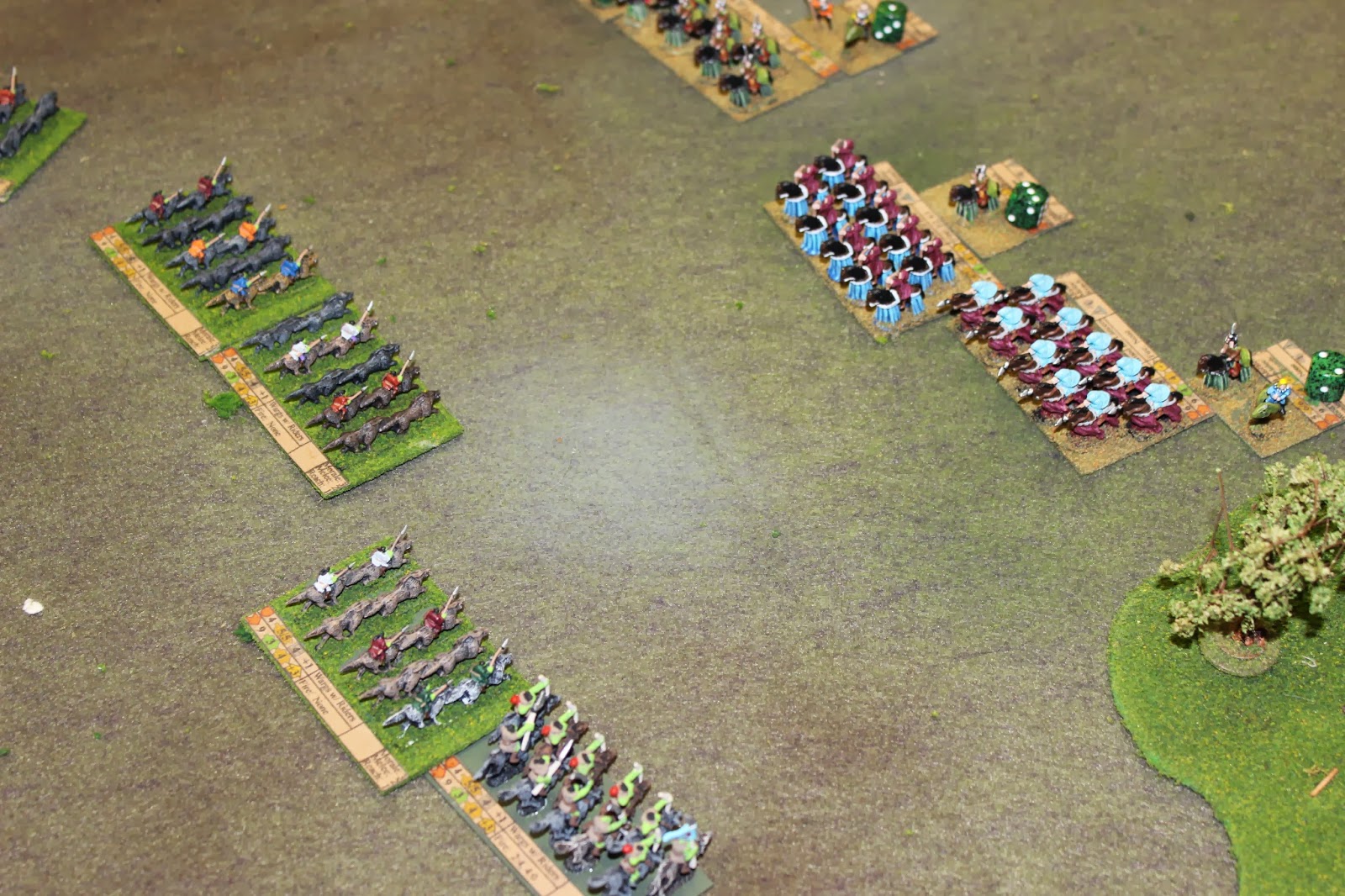 Elf mage casting a fireball. the only spell he cast during the game was "Cowardice" which made on of my unit's morale drop to a 7 (high numbers are bad). 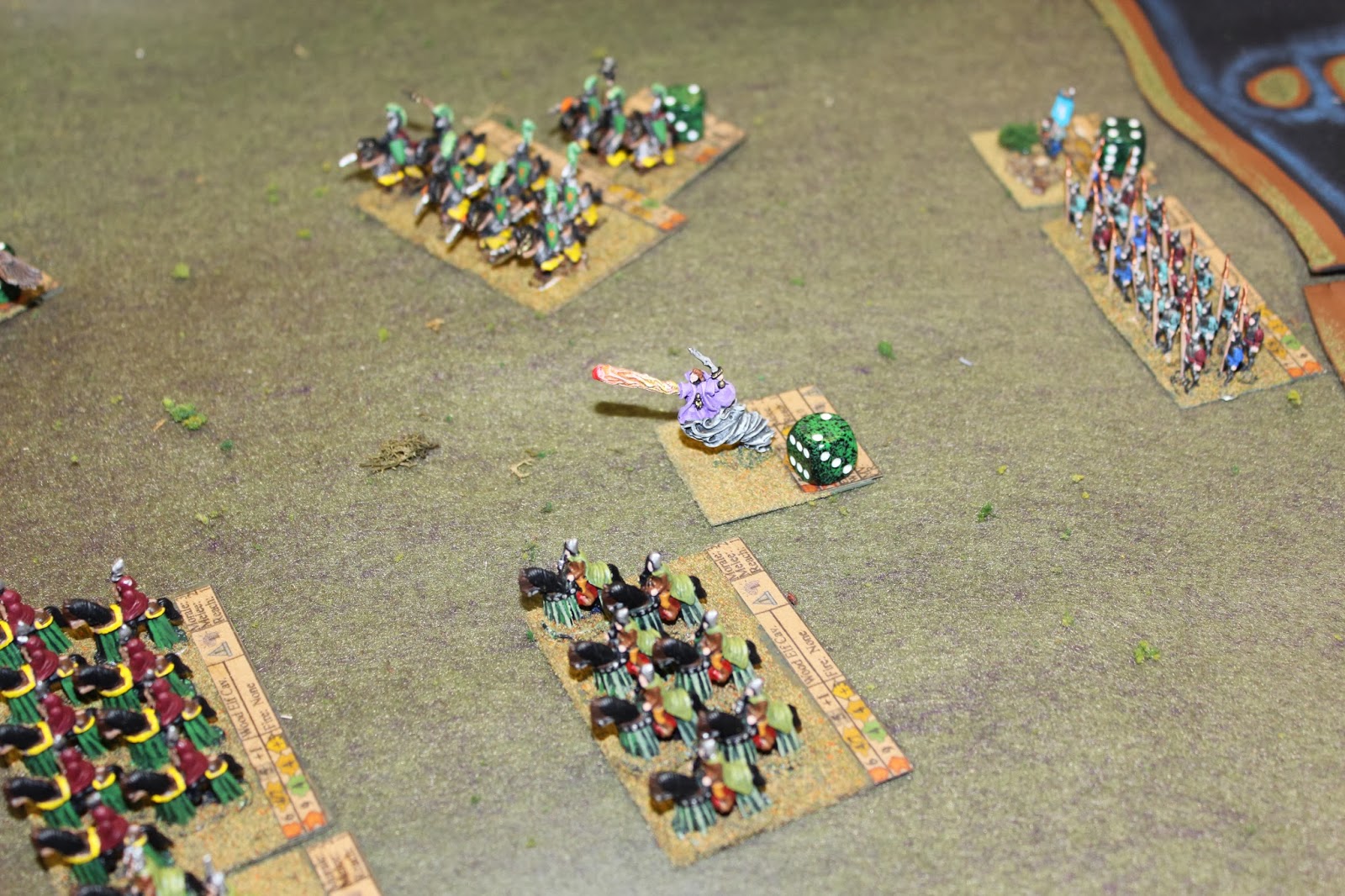 Cool shot of Buck's Ents coming across the river. 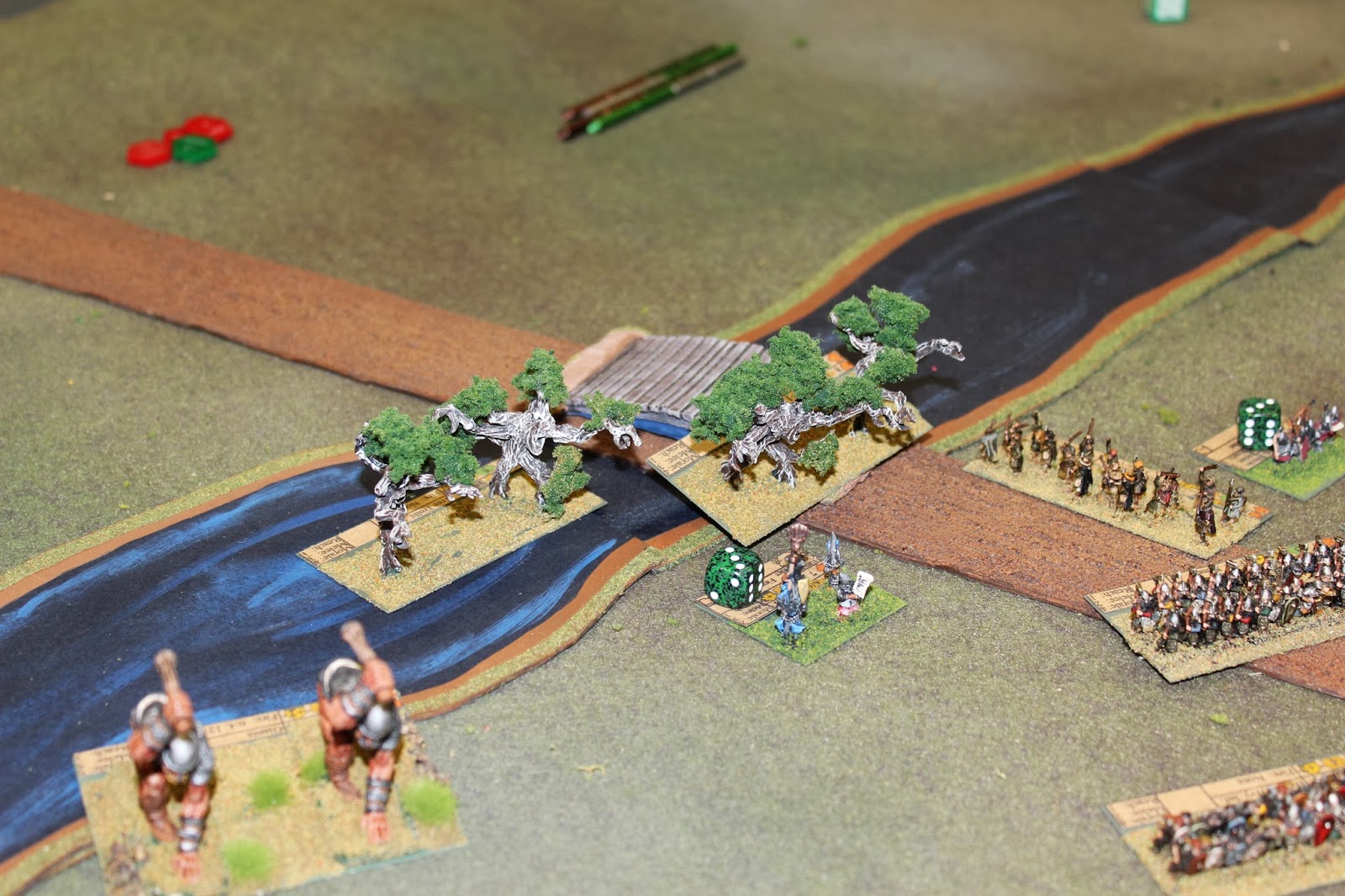 The rules were very easy to play and I hope to help Buck with some continued playtests.

This game was played at 9am on Saturday, with me and David as the British "Home Guard" defending a secret meeting between Montie, Patton, Ike, and one other general I can't remember.

The rules for this one are very interesting and card driven. Here is a shot of one of the cards: 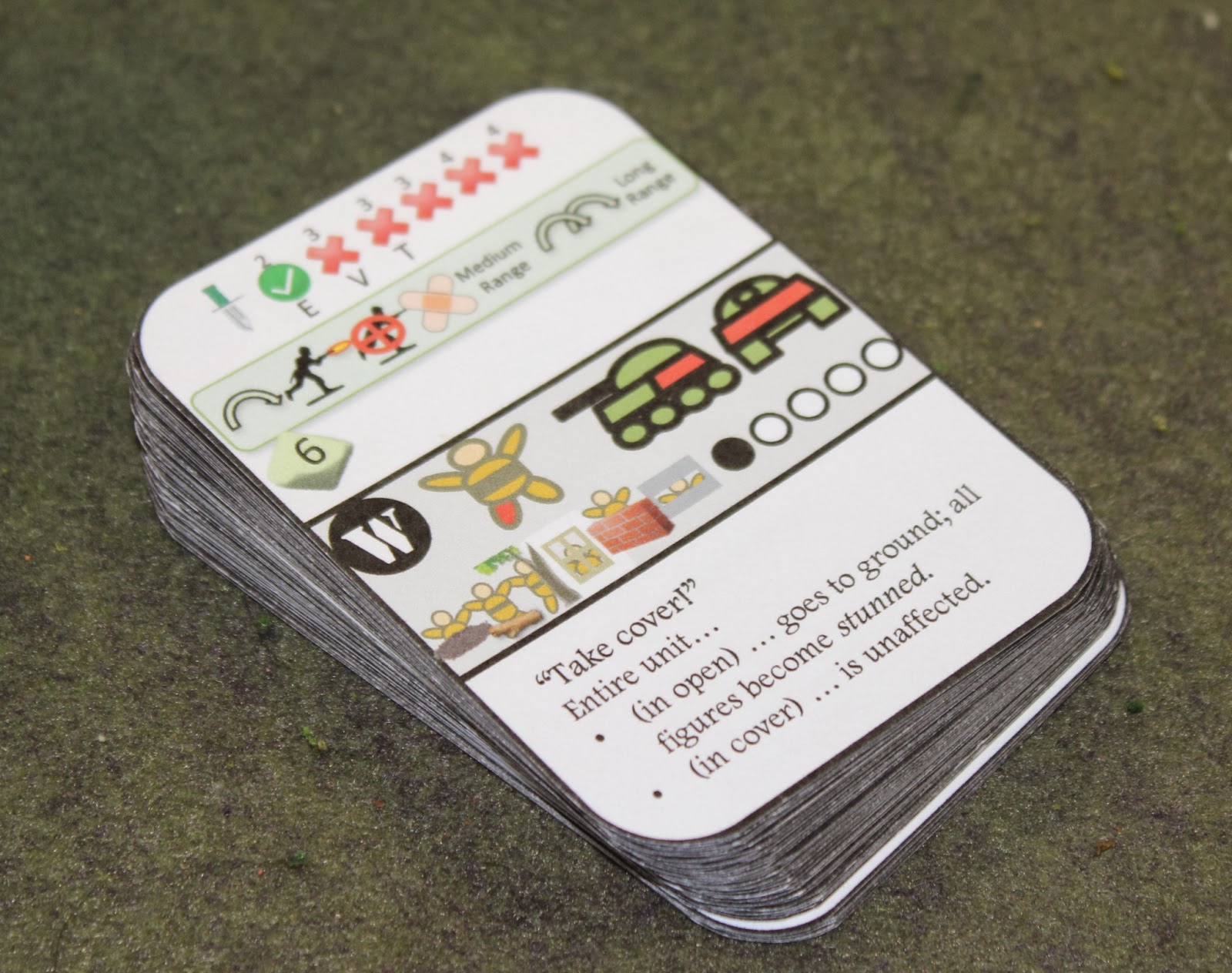 I'm not going to explain the rules, as I don't want to steal any of Buck's thunder when he announces the release of these.

The scenario had 2 squads of the Home Guard vs. 3 squads of German commandos. The battle was very hard fought, but the generals were saved even though Ike received a wound fighting a German commando. Ike dispatched the commando with a 45 slug to the head. I like Ike!

Some shots of the game, the generals were in the blue homestead: 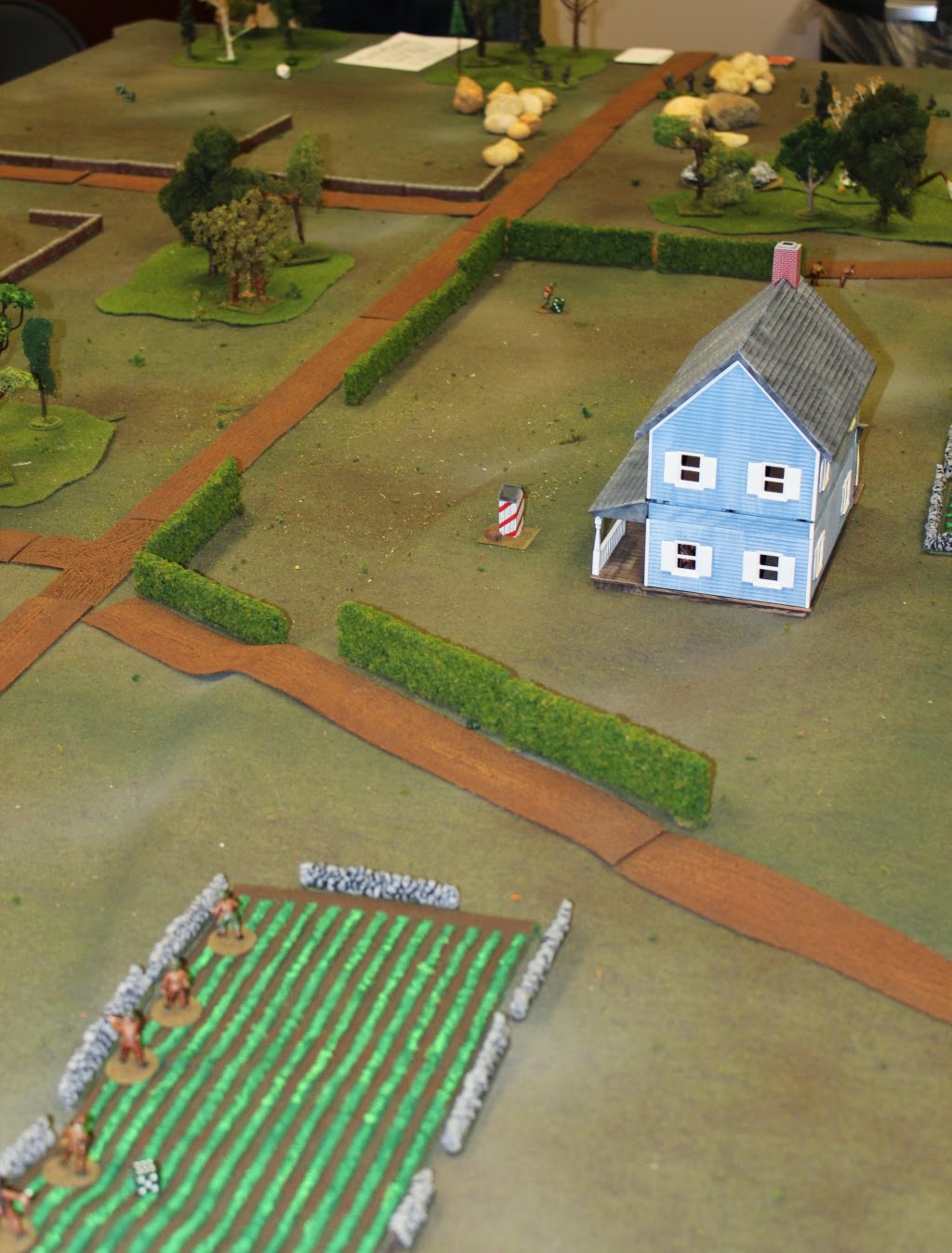 German fire teams moving through the woods to the objective. Scatter members of the Home guard resist. 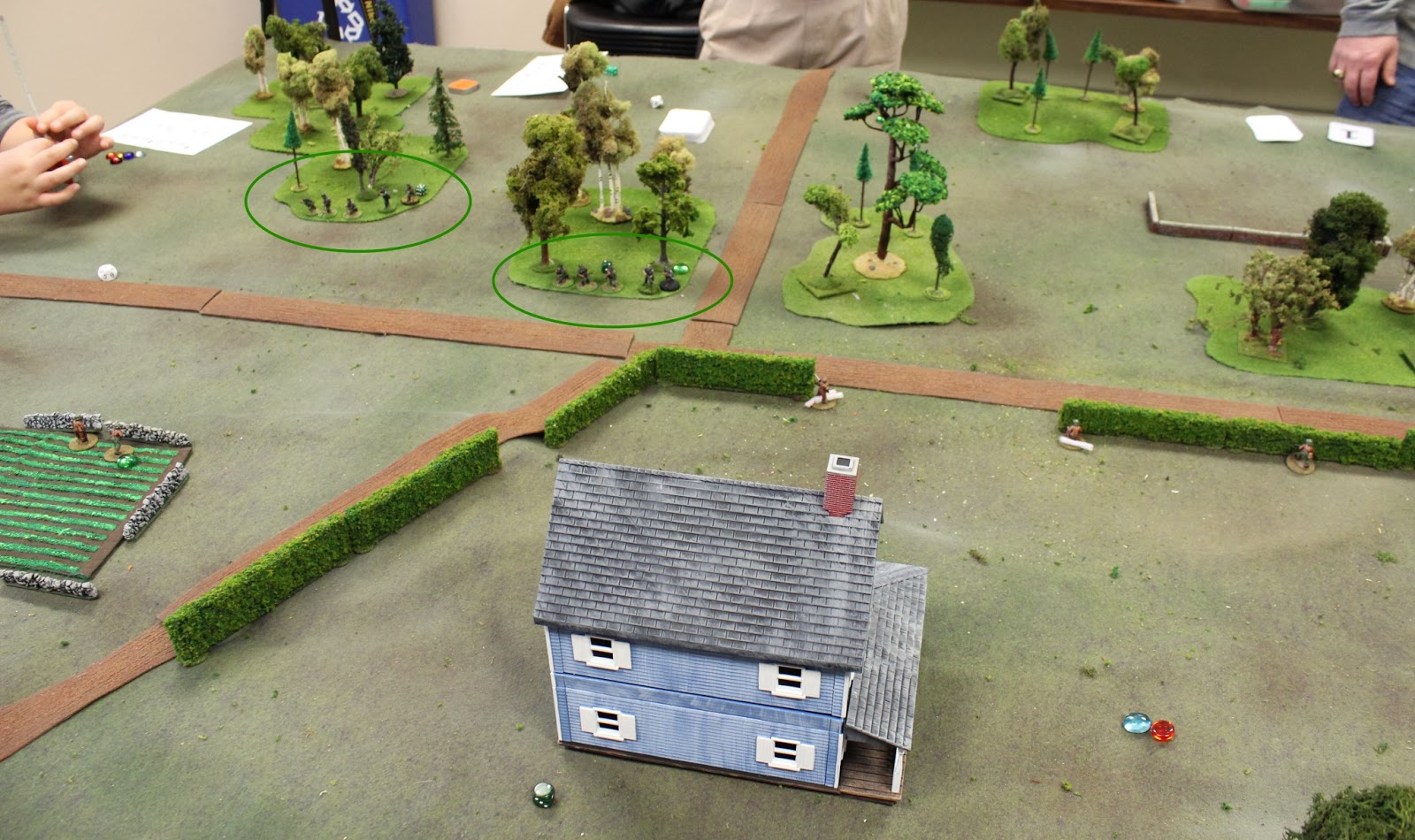 one of my home guard fire teams being finally overrun by commandos after really punishing the Germans for their transgressions. 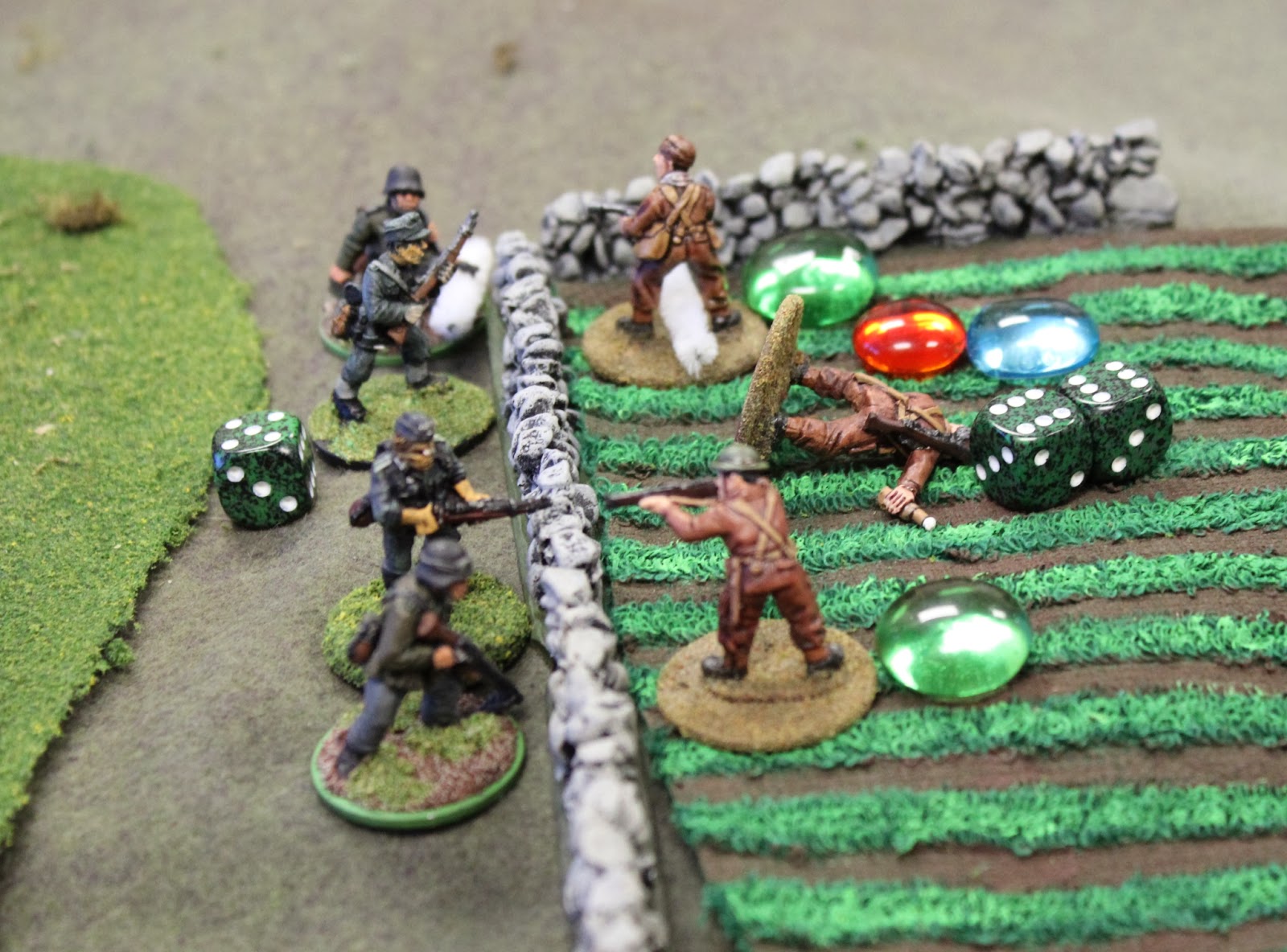 What is left of two German commando fire teams charge the house. My Bren gunner and riflemen in the house kill 3 out of the 4. One makes it to the porch and shots Ike, but Ike takes revenge and guns him down. 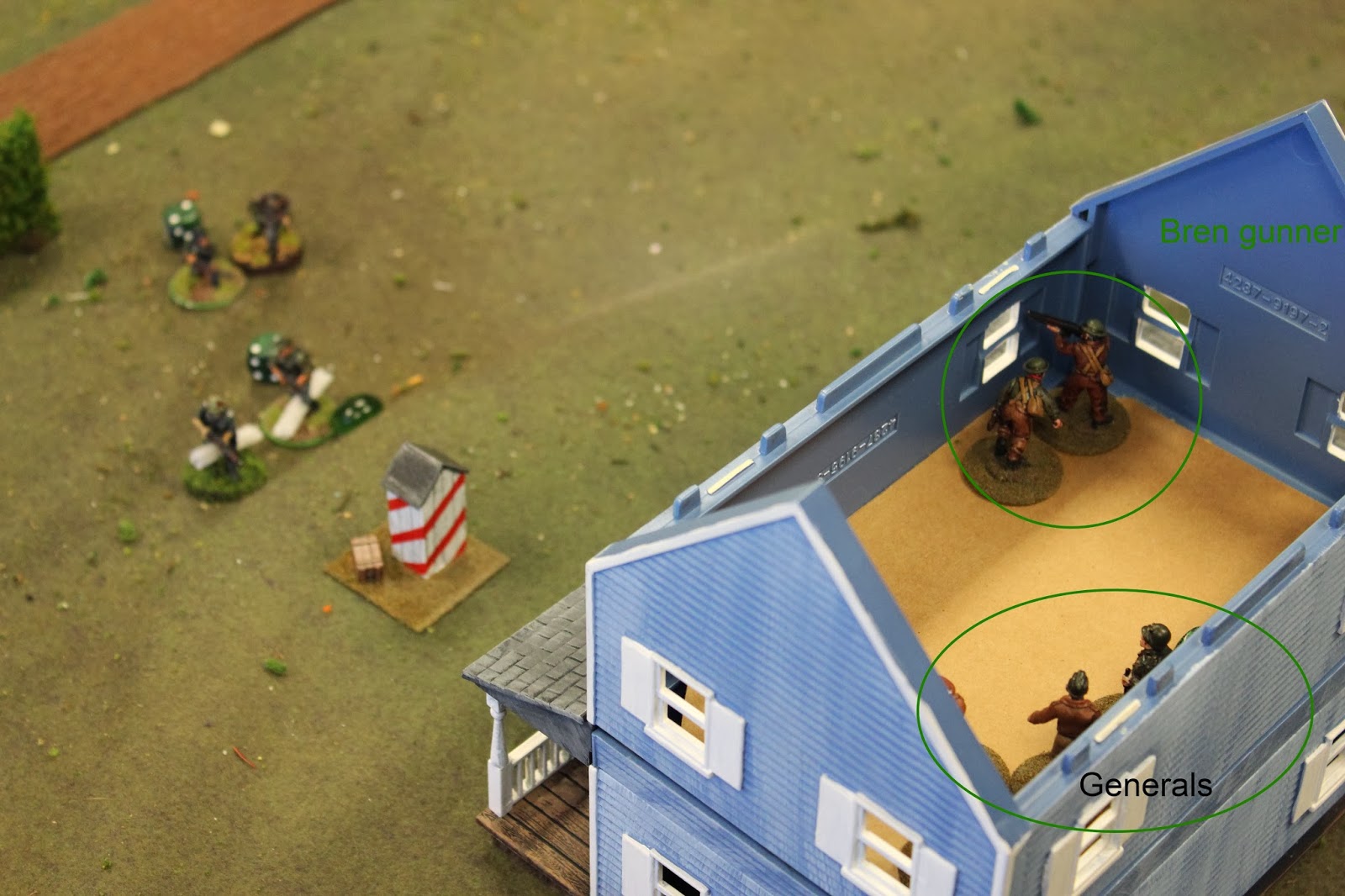 Battle of Montmirail
The last big miniatures game was the massive 10mm slugfest with Buck's figures and using his Napoleonic rules (see below).

We playtested a scenario from his up-coming scenario book on the 1814 campaign in France. We fought the battle of Montmirail (January 1814). Fought on snowy ground and eventually in the dark.

It was a good playtest in order to make the scenario better balanced with regards to victory conditions, duration, along with testing the night rules. I really like how Buck's rules handle Blown cavalry in the rules. Simple and very smart.

French are outnumbered in this one and have to be on the attack. You can seem my initial starting position. Lots of reinforcements for both sides arrive at various times during the battle. 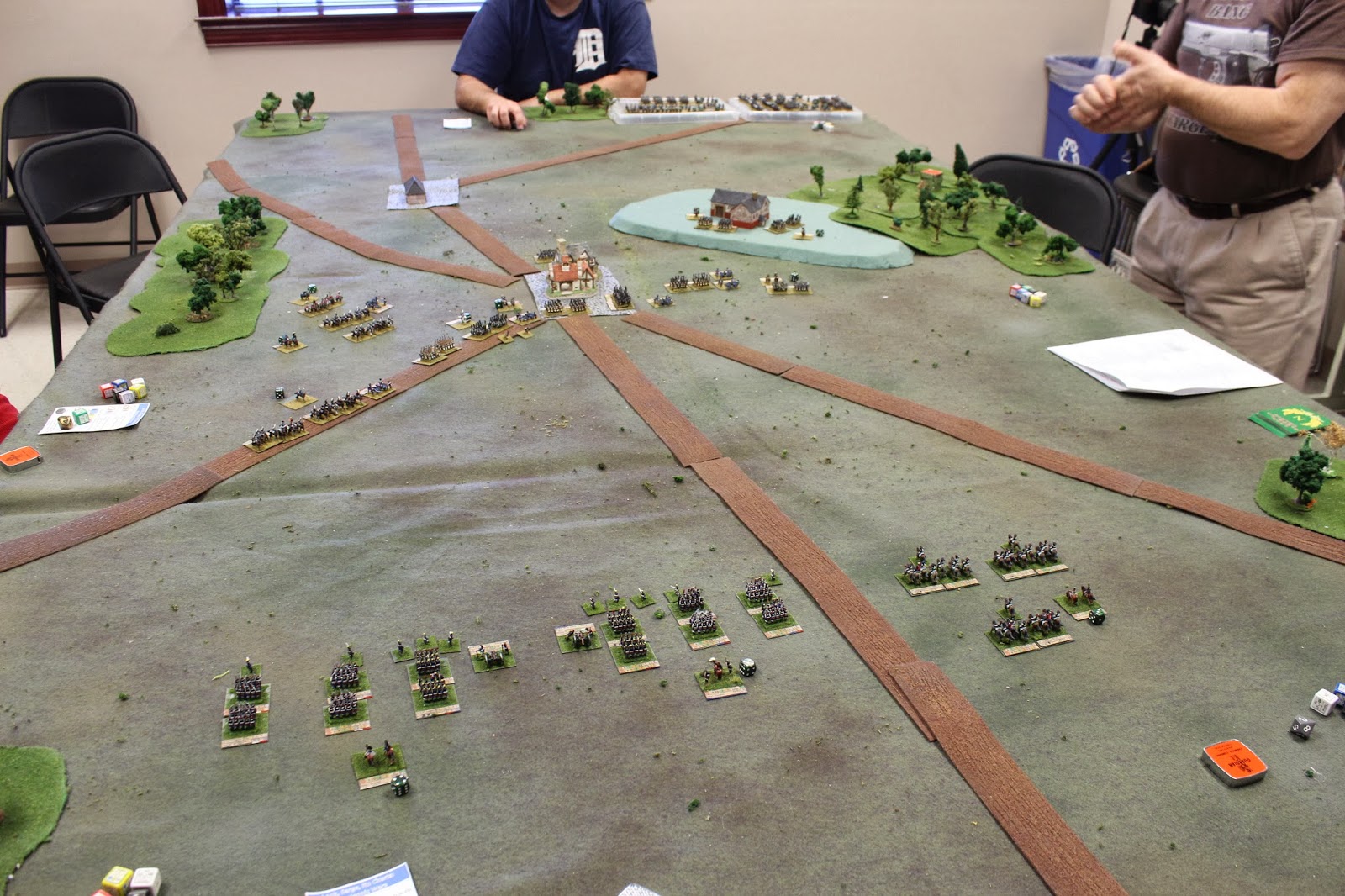 Each unit is a regiment of 2 stands. The little stands are inherent skirmishers and as the battle progresses the skirmishers have their own little fights, which is pretty cool. 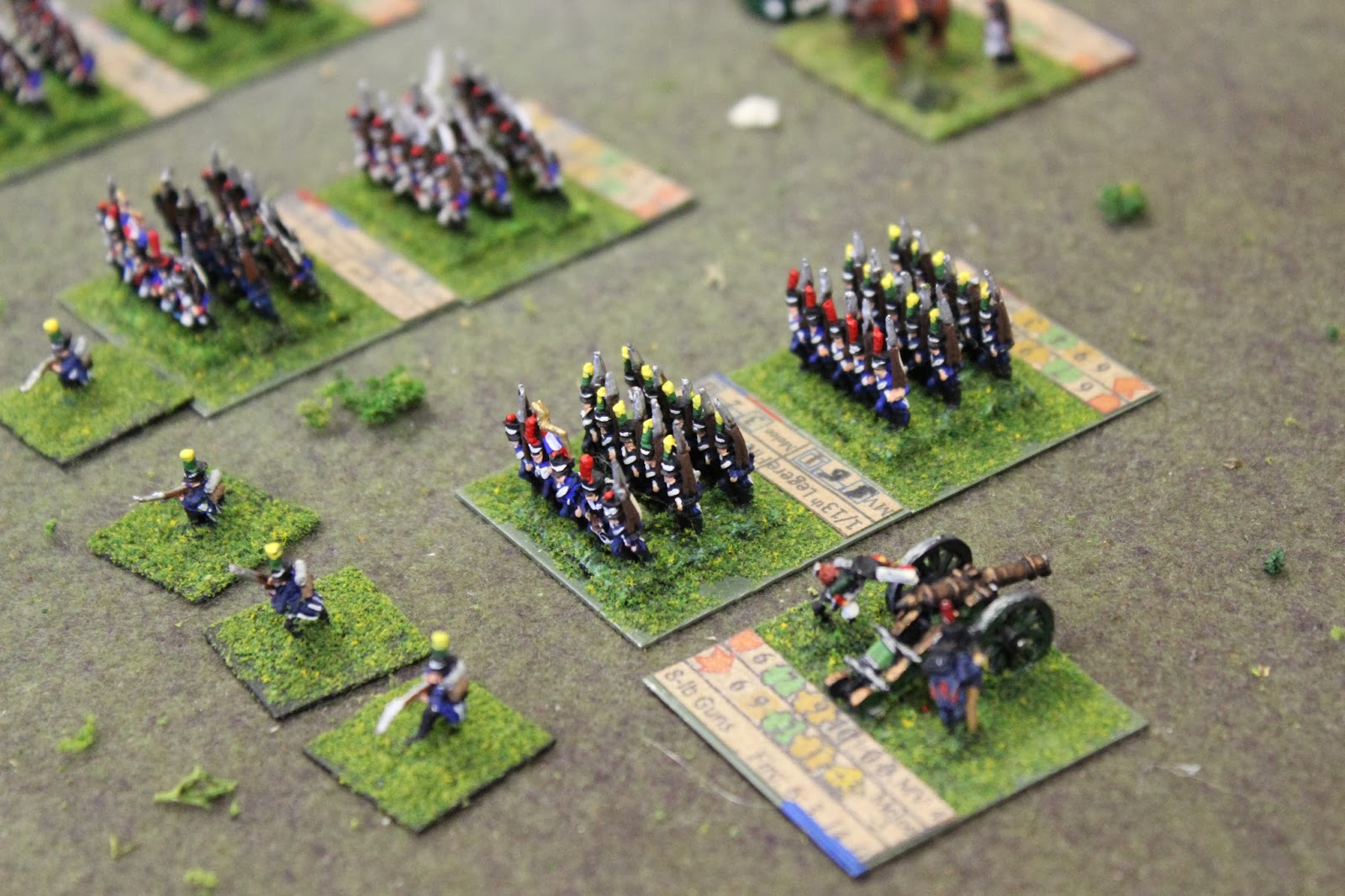 Any early cavalry charge by the Prussia\Russian player blunted my attack and delayed me from reaching the town in a timely manner. 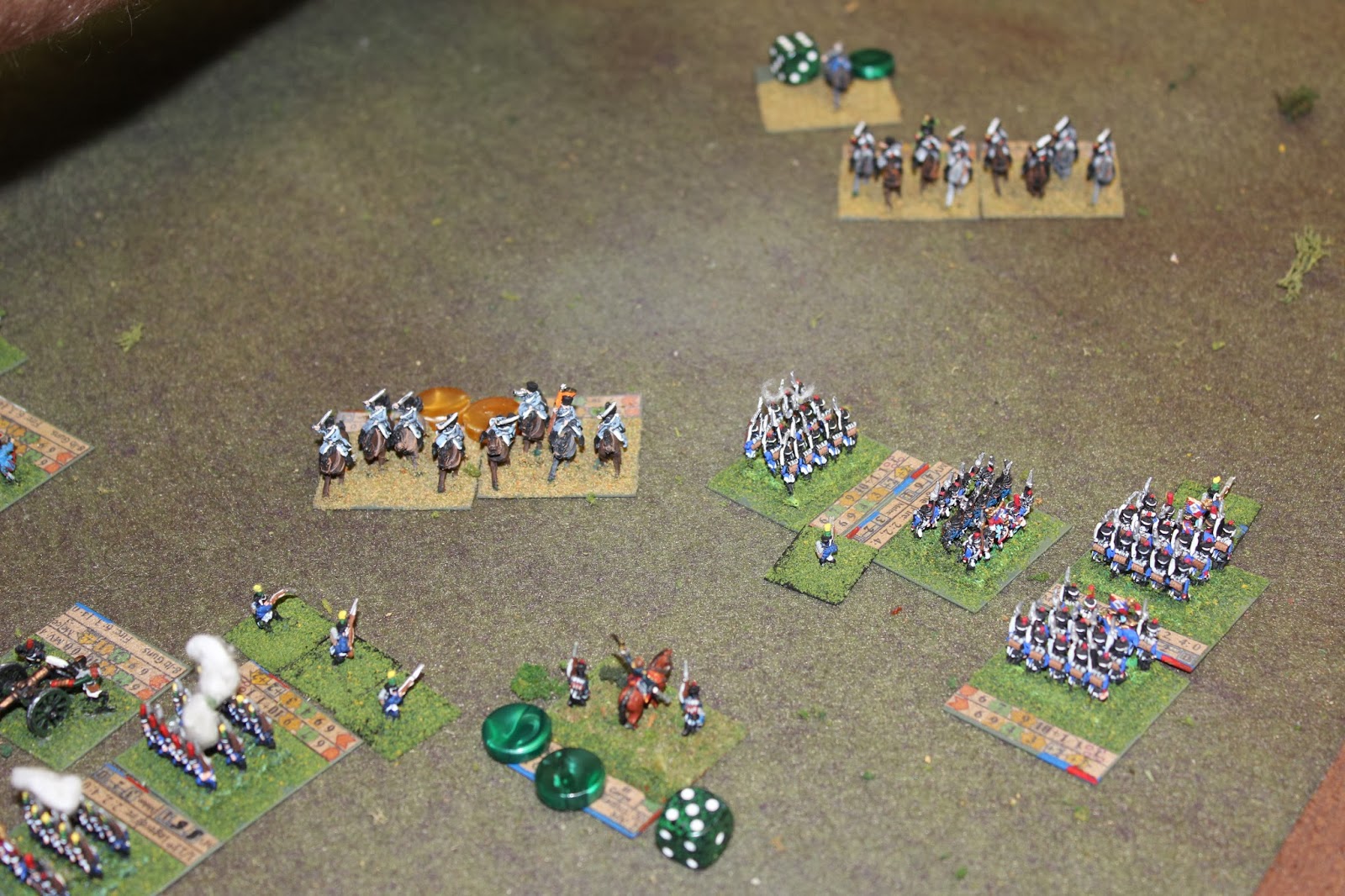 My Chevel-leger counter-charged and saved the infantry from disaster. 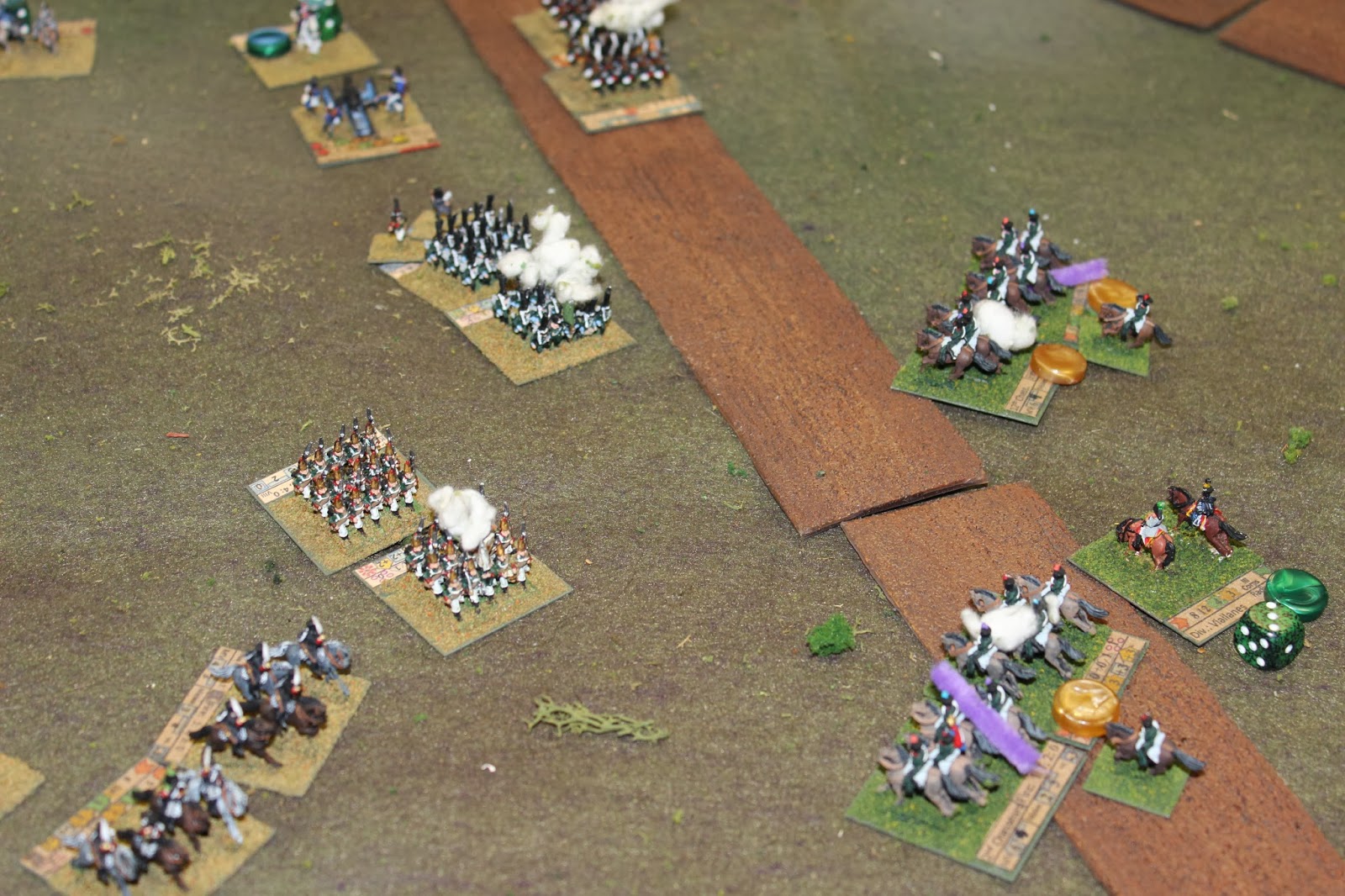 Massive French infantry and cavalry columns make their way into the battle. 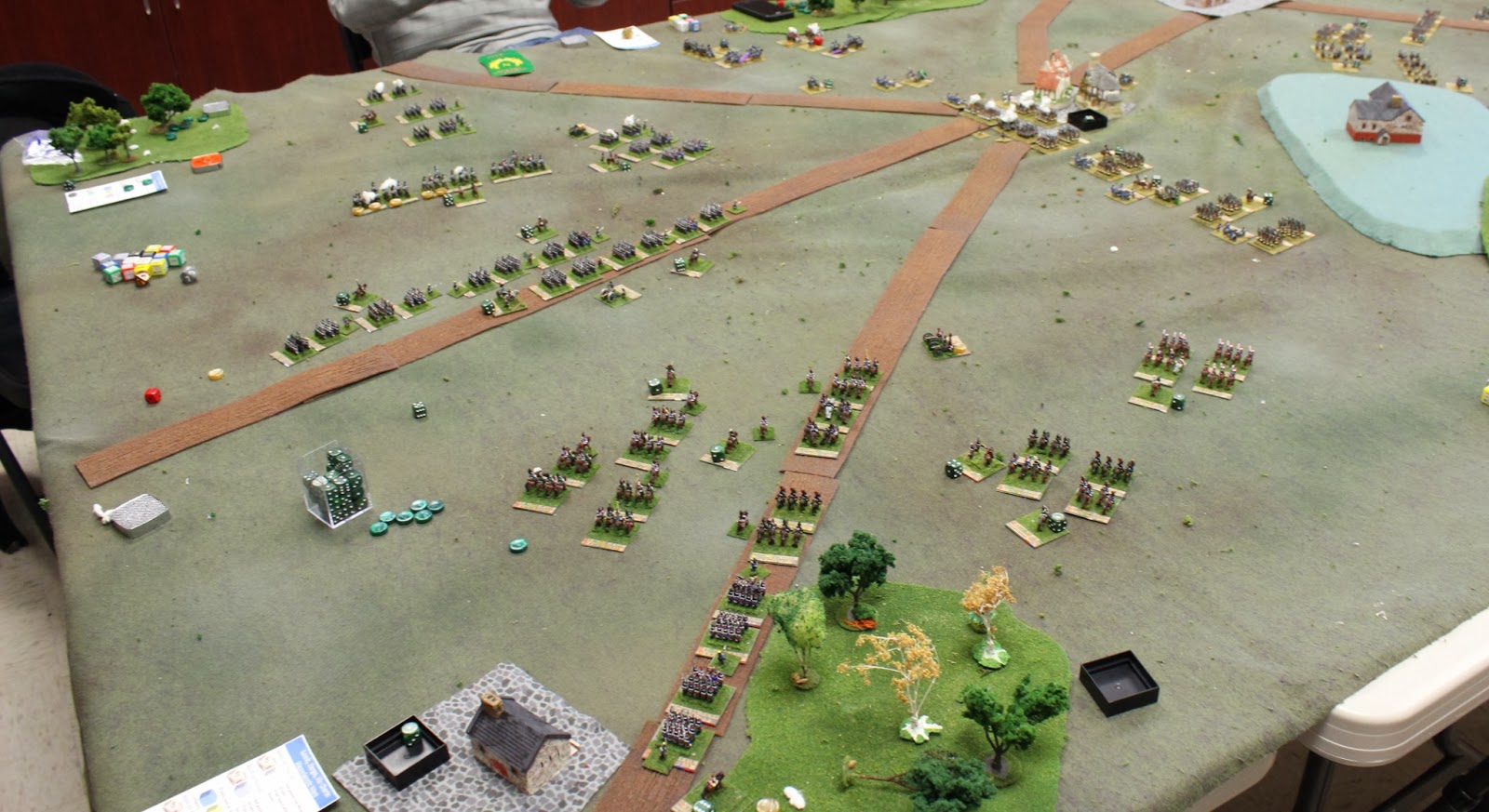 Critical mass is beginning to form 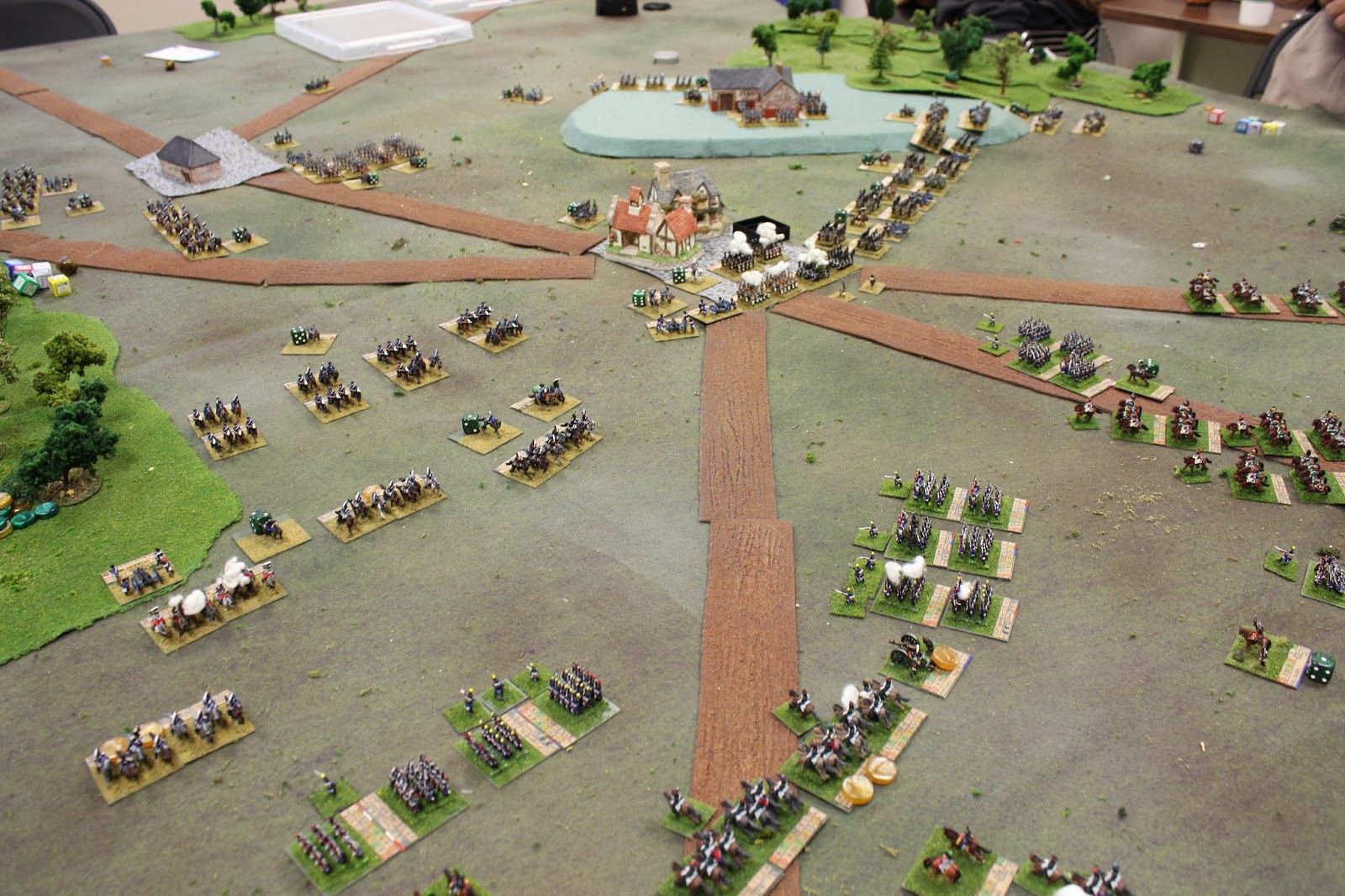 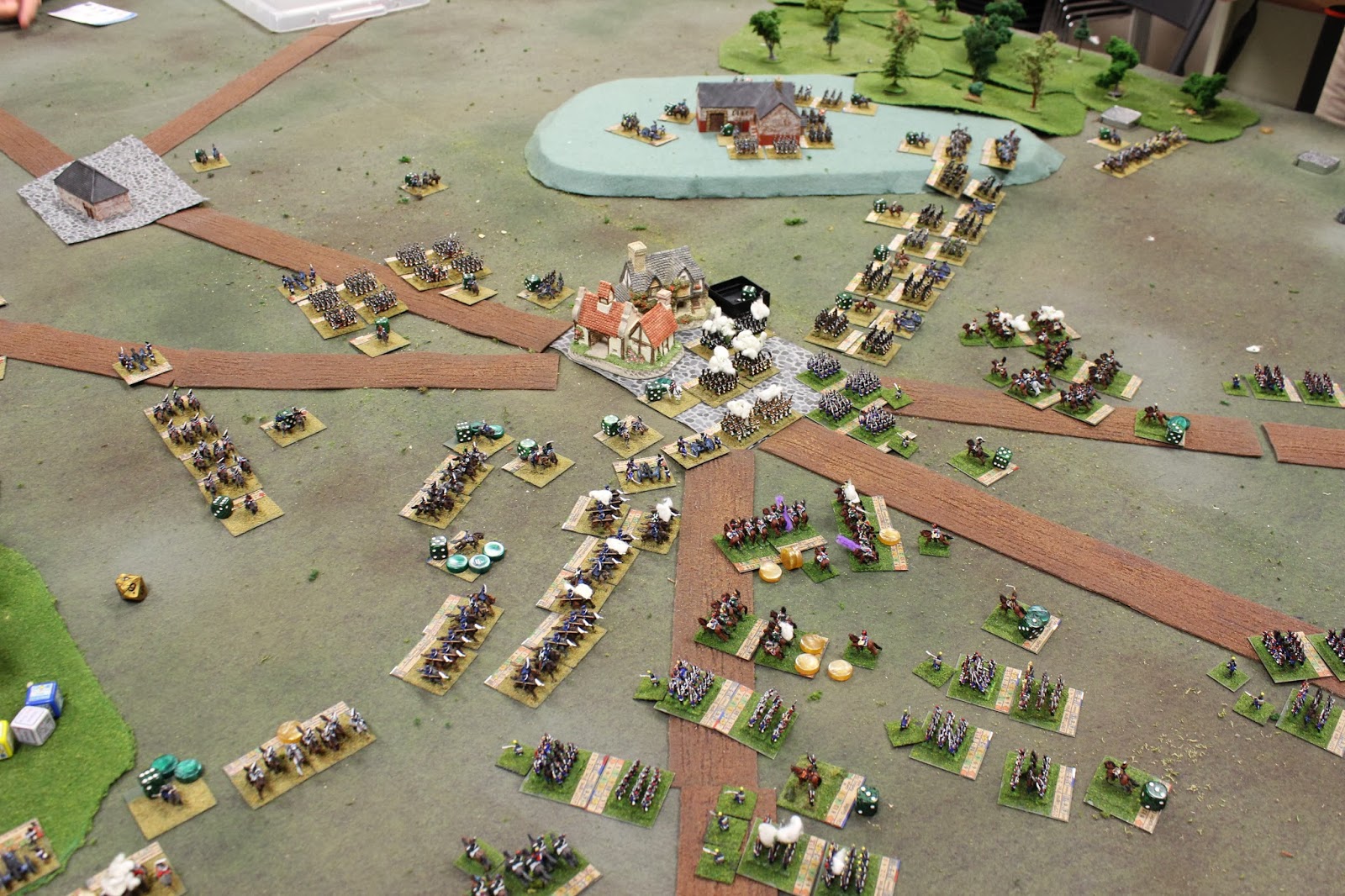 French take part of the town. 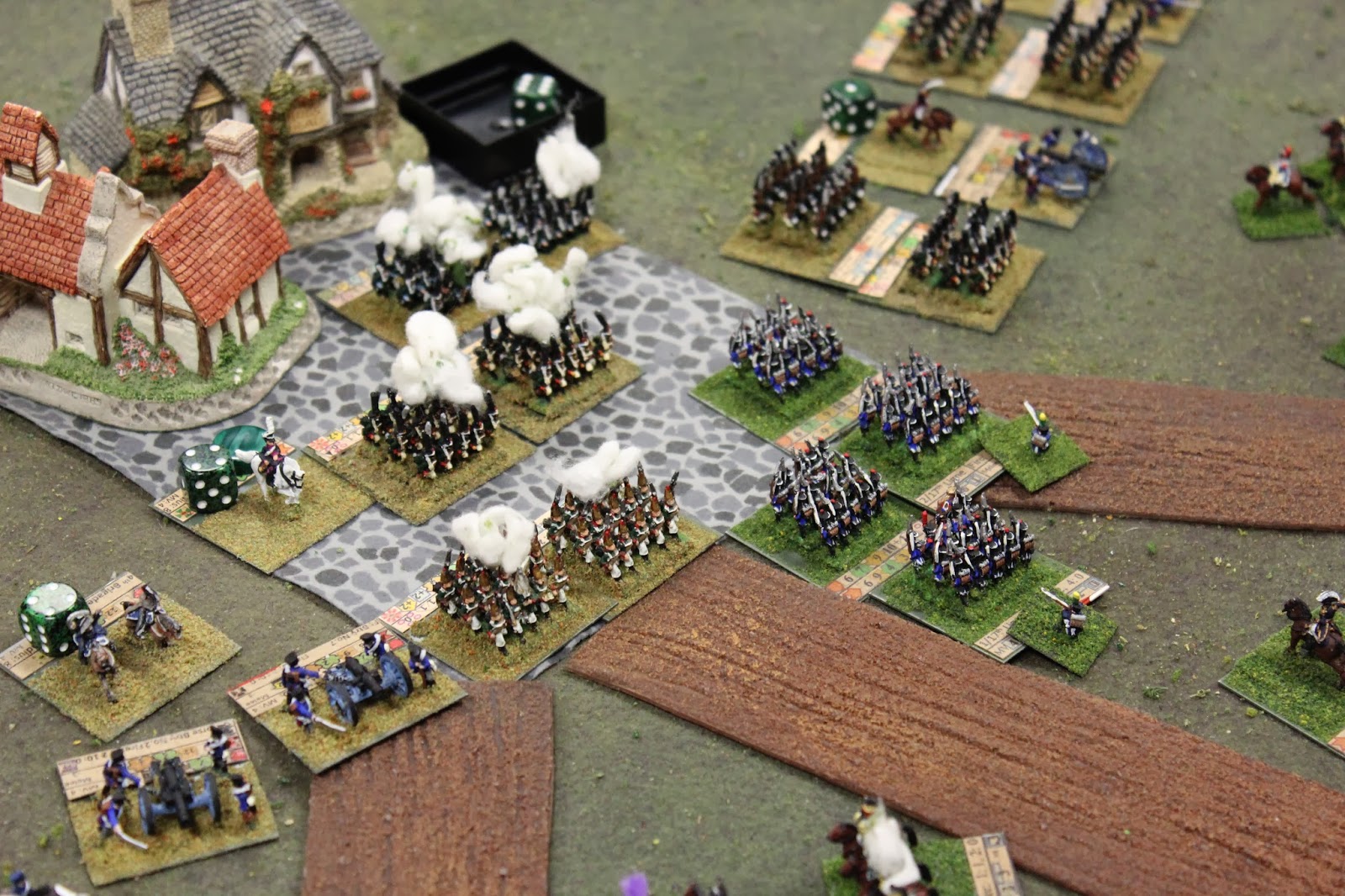 In the end, the French gained a minor victory due to the amount of casualties they inflicted (removed from the table) with a 5 - 1 ratio!

X-Wing
Well Wedge and Luck were taking on 4 Tie fighters, and Luke was wasted very quickly. That left me as Wedge, trying to fight off the horde of TIE fighters. I was freaking out, but slowly I was able to take each fighter out and the rest fled the quadrant. 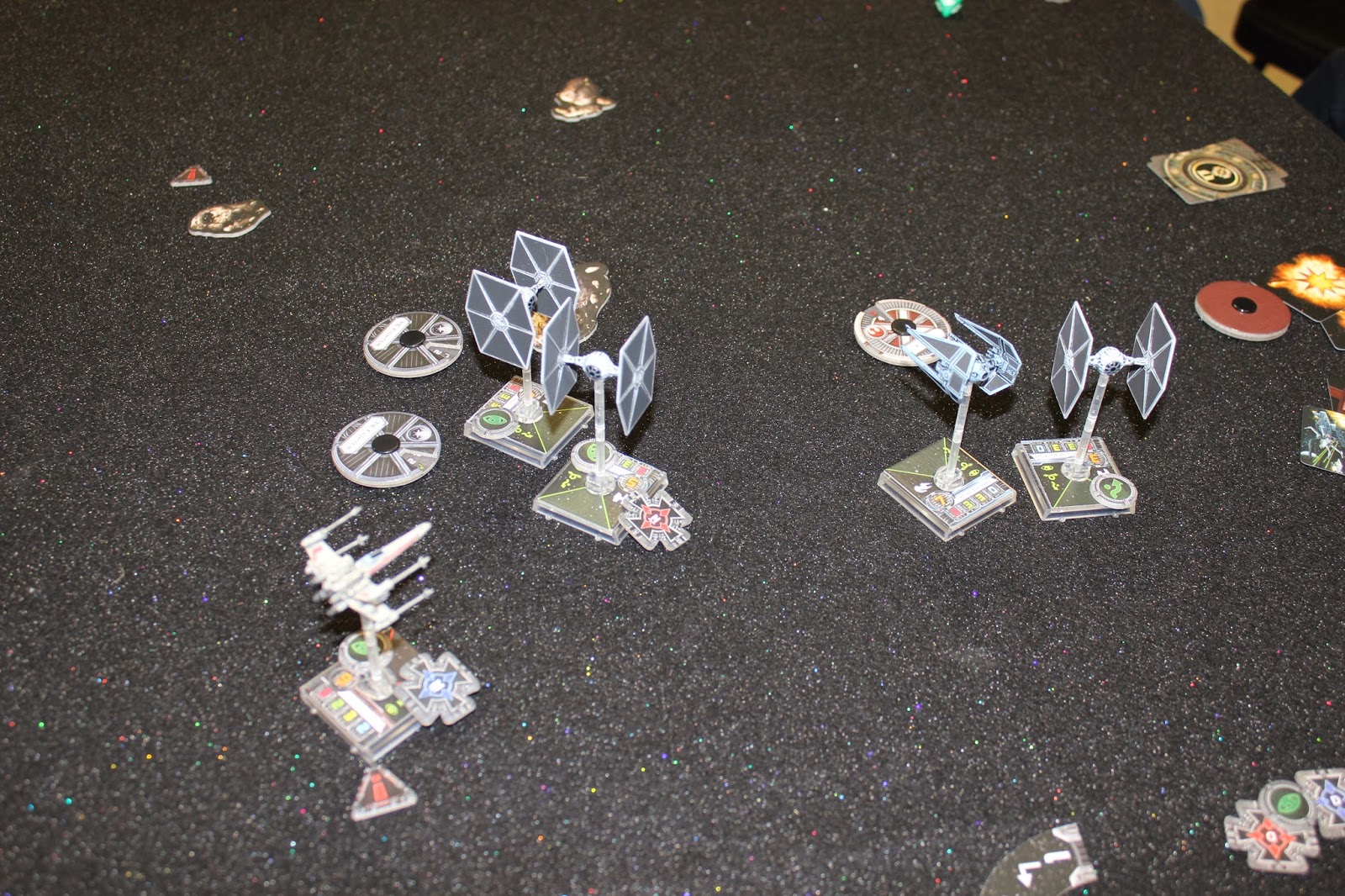 I think Fantasy Flight Games really hit a homerun with how they handled this game. I look forward to playing this game again.

Thanks to Jim, Buck, and David for running some great games and being gracious hosts!

Sounds like a great time. I had a pretty good time at Siege of Augusta, but it looks like you got in some fantastic games up in Concorde. Congrats. The one new thing I saw at Siege, is Sails of Glory. It shares some similarity with both Wings of War(/Glory) and with X-Wing, but has somewhat more detailed combat (shooting and damage) rules.

The fantasy rules, and Buck's card rules for WW2 both sound great.

Sound like you got in a great and varied weekend of gaming. Great post and pictures, Eric!