It has been way too long since I have posted something about miniatures.

Well, I broke out my Seven Years War collection and ran two battles.

First battle was smaller and featured a town as the focal point.

Second battle was larger, and most of the heavy terrain was on the edges to allow a better field for the battle. I'll create another blog post for this battle.

After not playing Piquet for about 8 months, I'm just kicking myself for not doing it! We had soooooo much fun! Highs and Lows! Momentum and mojo swings. Love this ruleset.

We used the Cartouche 2nd edition ruleset, with the Piquet Master rules. Also used my rule of 1/3 for impetus control. Click on photos to enlarge. 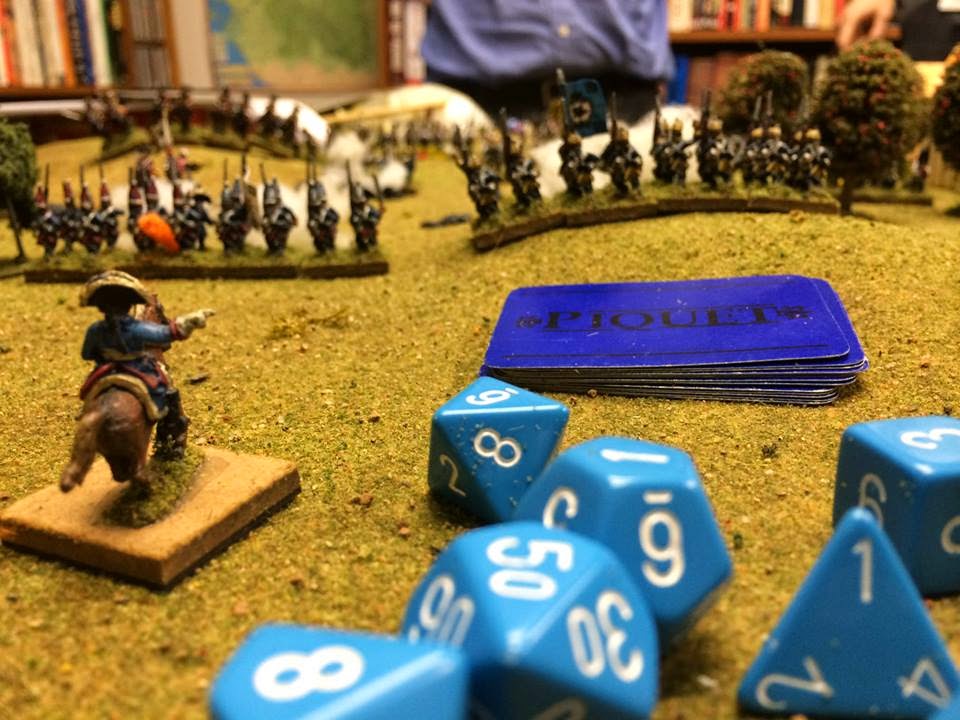 This battle was an introduction to Piquet to a couple gamers and they quickly jump into it with both feet. The Prussians survived a large Austrian impetus run to really hammer the Austrians in combat. Mike and Eric C. played the Austrians, while Charles, Jan, and I played the Prussians. Thanks to Charles for most of the photos for this battle.

Charles and I commanding the Prussians: 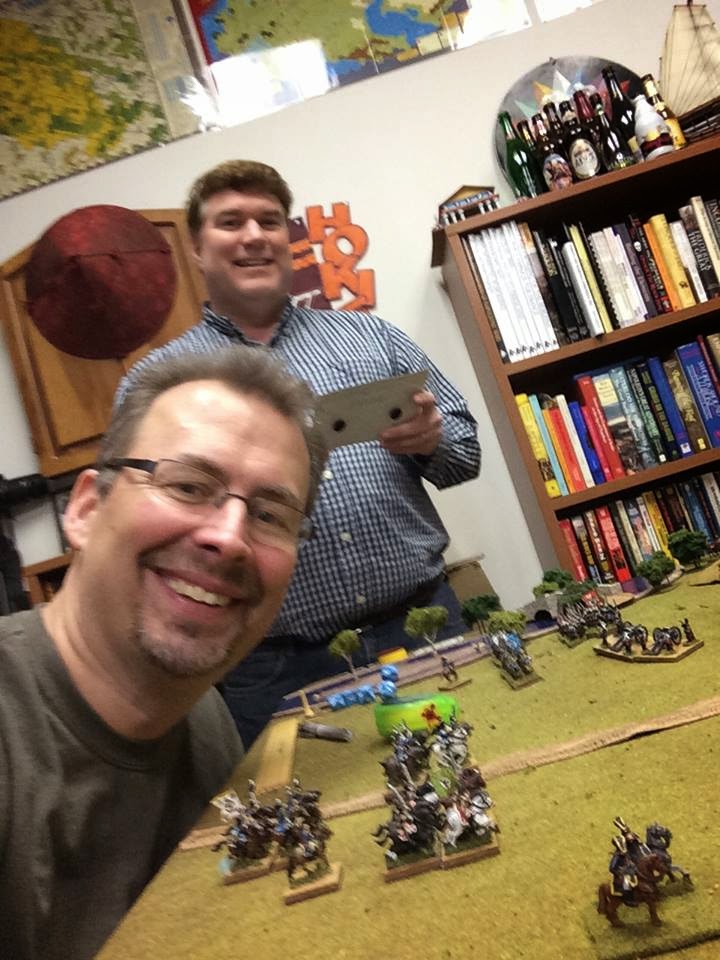 The Austrians advanced quickly across the battlefield attempting to get to the Prussians in a hurry. The Prussians had both flanks anchored (river on one side and woods on another), so the Austrians couldn't use their numbers to turn a flank.

Shot of the river anchoring the Prussian right flank. 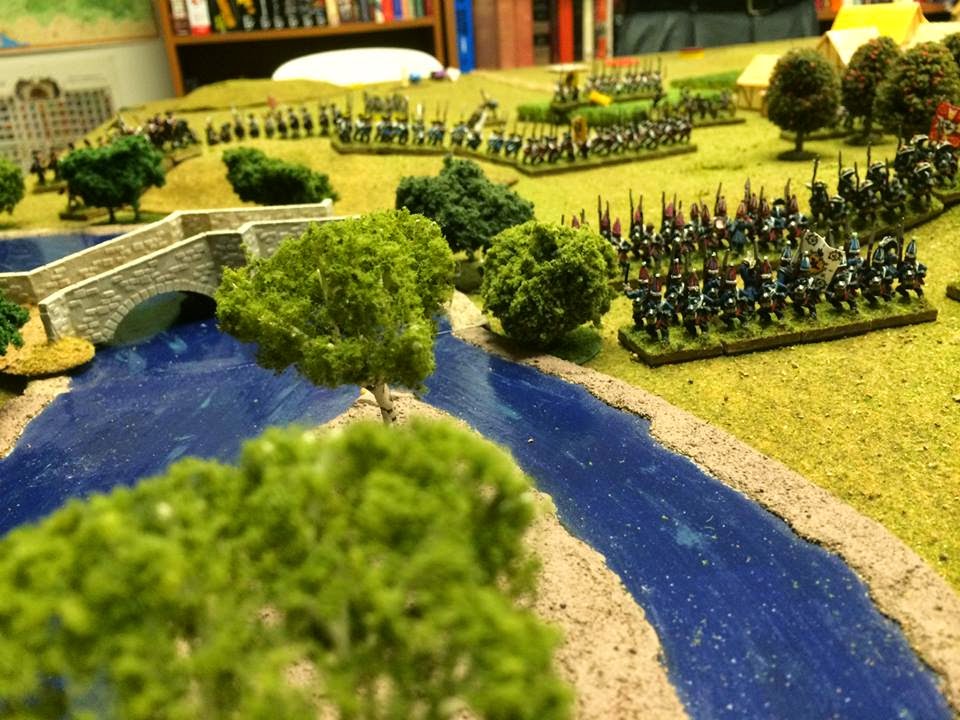 Here is shot of the battlefield from the Prussian point of view. Mike on left, Eric in middle, and observer Steve on the right. 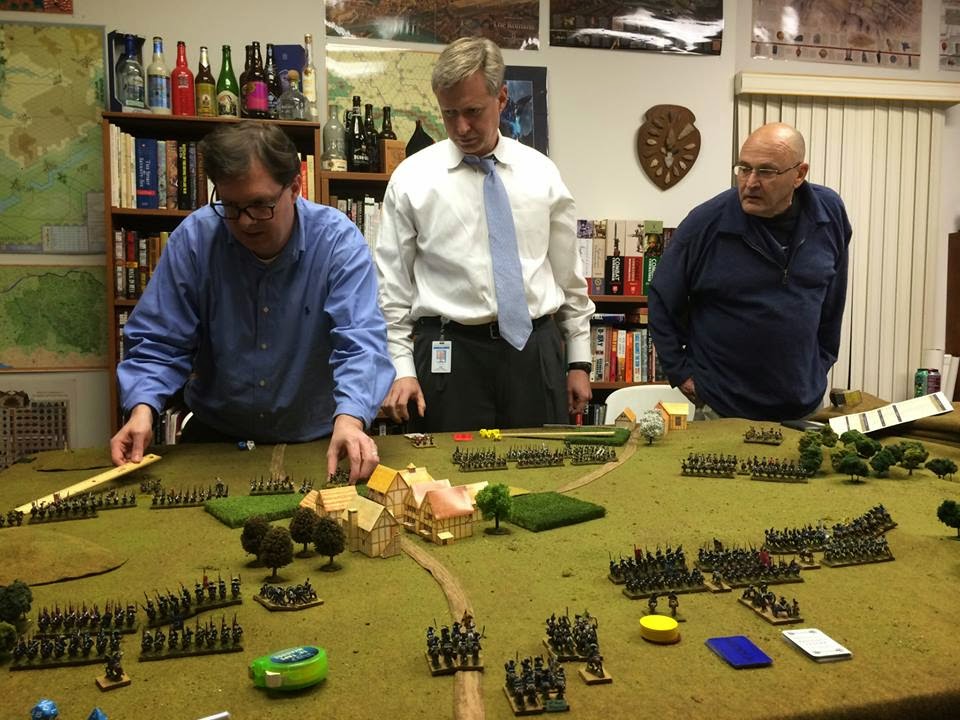 Austrian general von Eric moved his heavy 12# guns onto the only hill on the table that could give him a sight advantage. 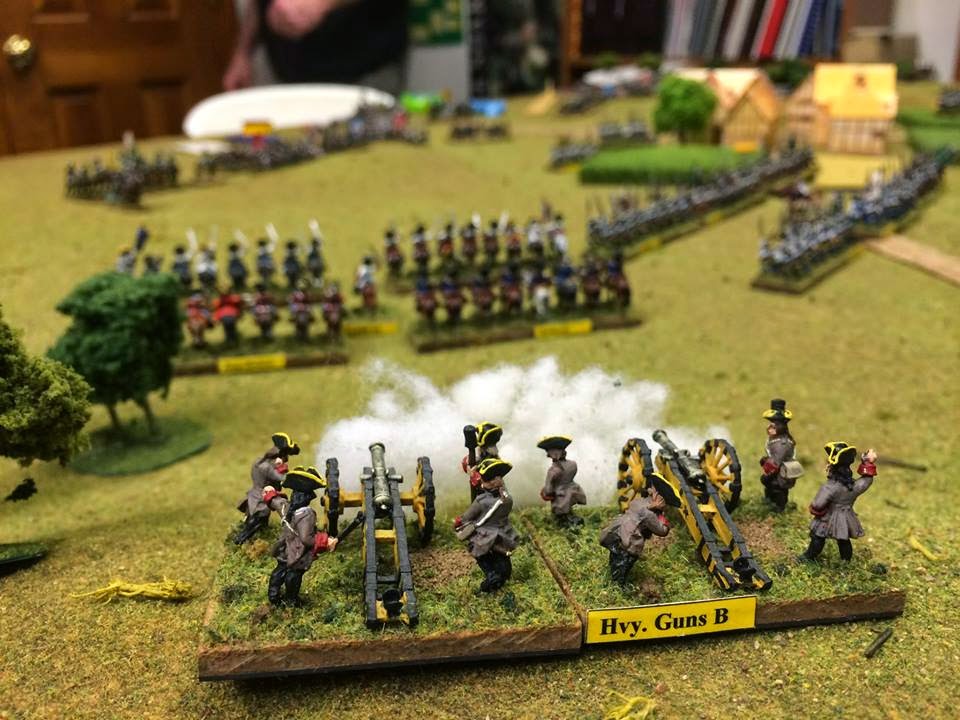 His guns wrecked havoc down on the Prussian cavalry of the right wing, reducing 2 of the 3 cavalry units to only one stand! The armies hadn't even contacted yet and the Prussian right wing was looking devastated! 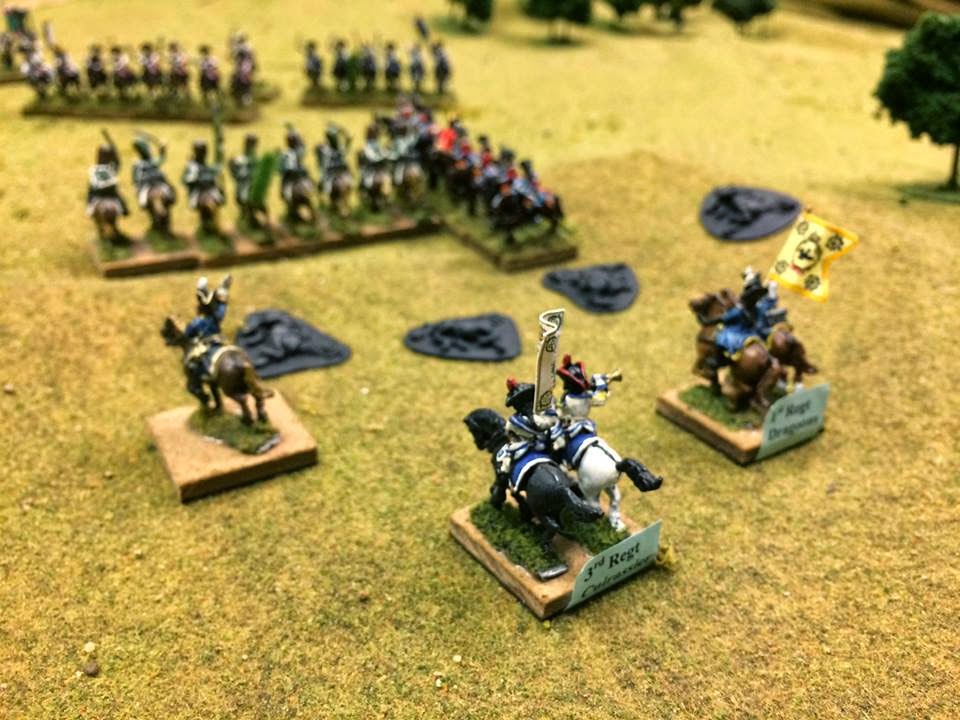 General Mike charged a Prussian #12 battery with one if his best units, thinking that if he could silence the guns the weak Prussian center could be pierced. Things didn't work out for him with the unit getting mauled. 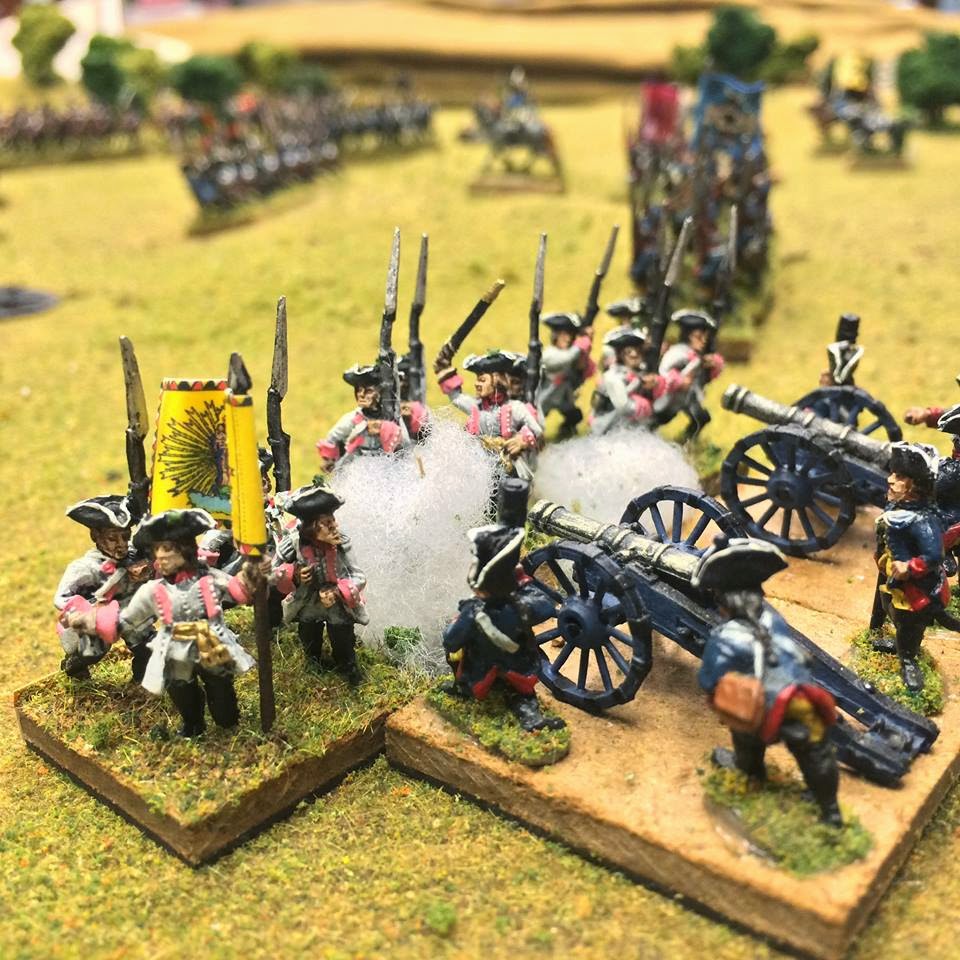 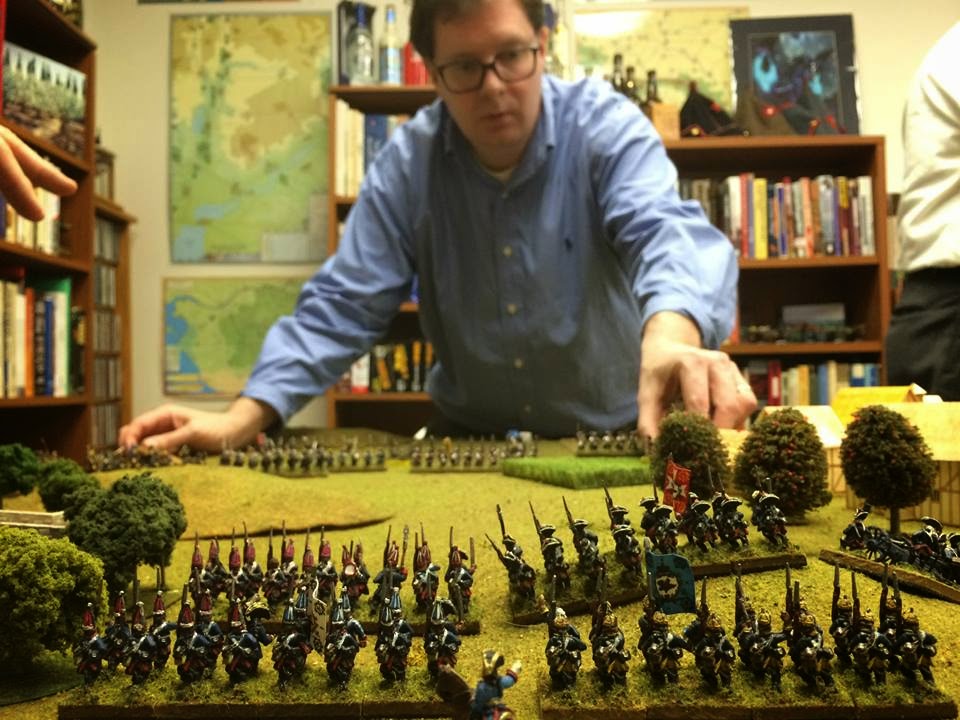 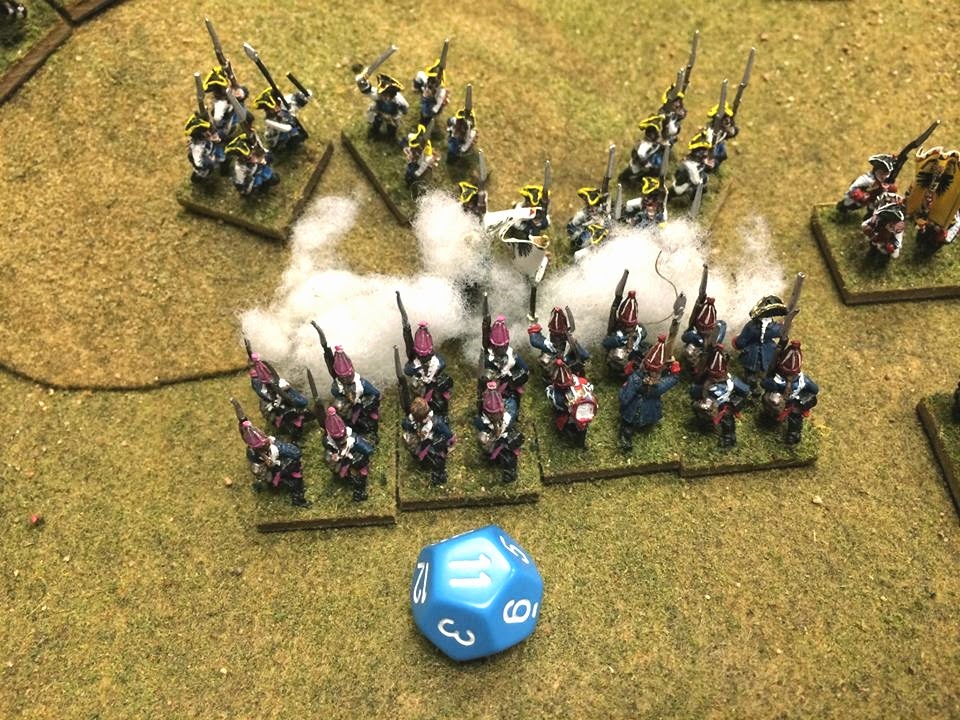 Panoramic shot just before the lines really clashed, from the Prussian perspective.

Here you can see me commit my cavalry reserve after Charles shattered the Austrian infantry with his 12#!! 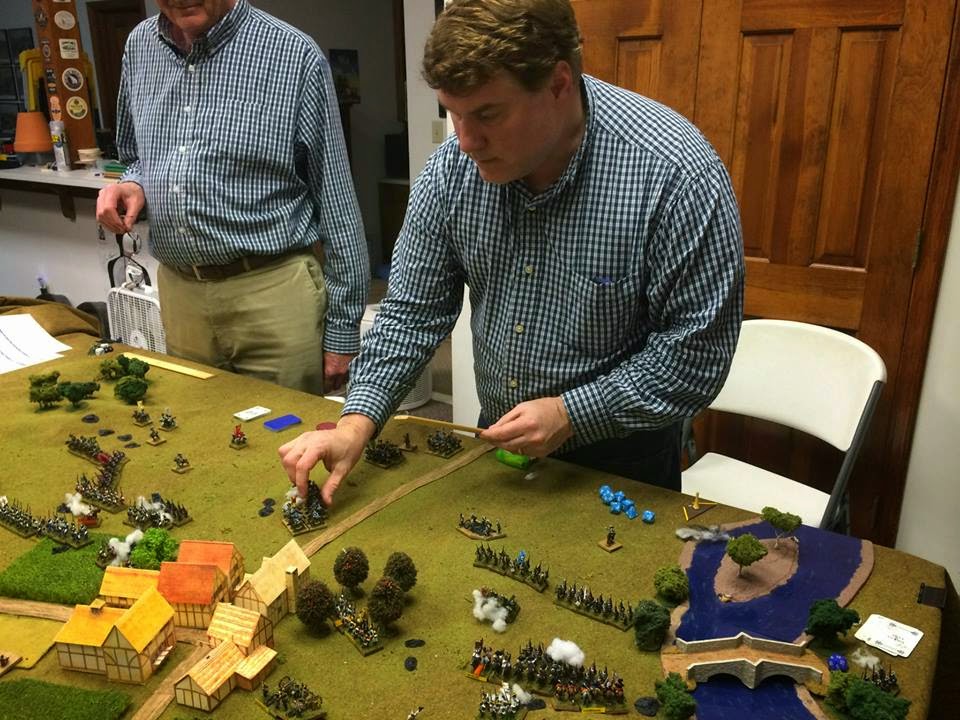 Here you can see my Prussian Dragoons crashing through the Austrian center while the Austrians desperately try to plug the gap with infantry and cavalry. 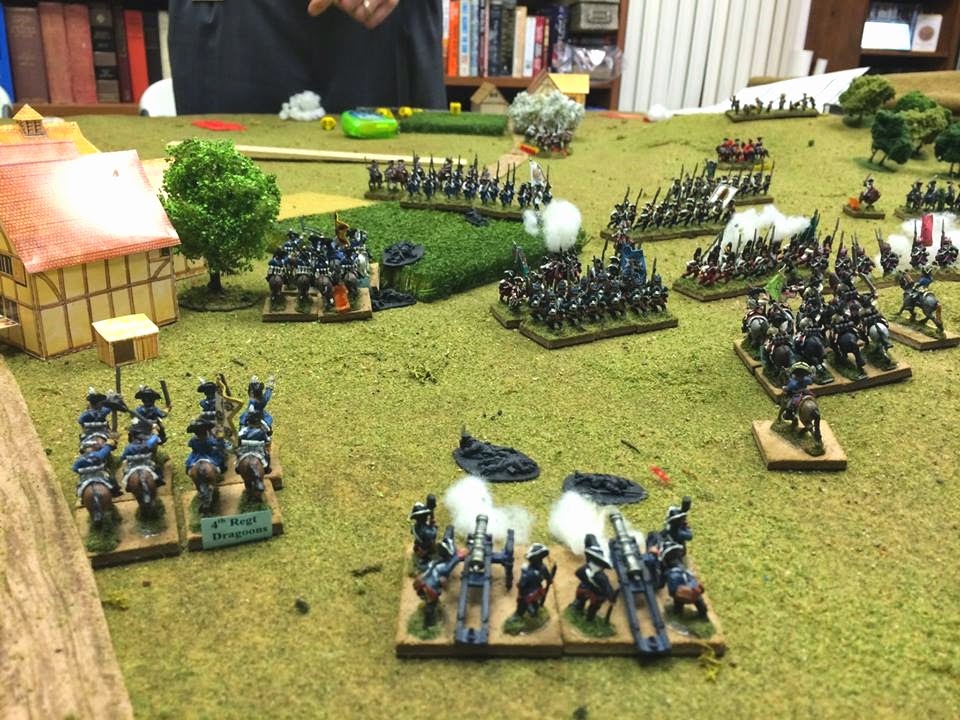 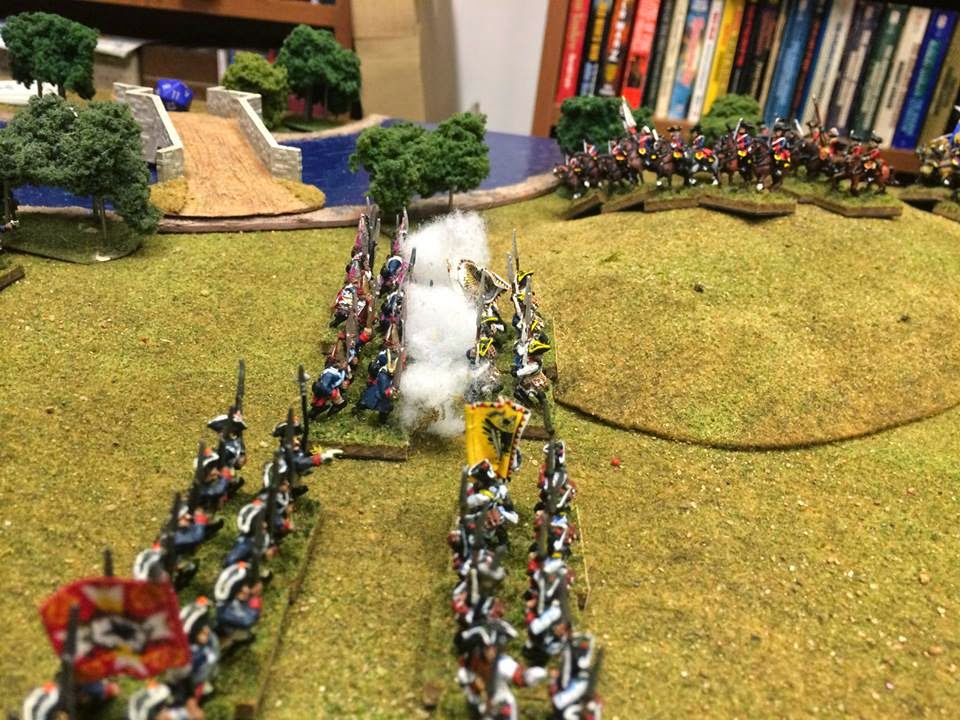 Nice shot (Prussians on left, Austrians on right) of the battlefield around this time. You can see the Austrians advanced halfway across the board with little Prussian activity. 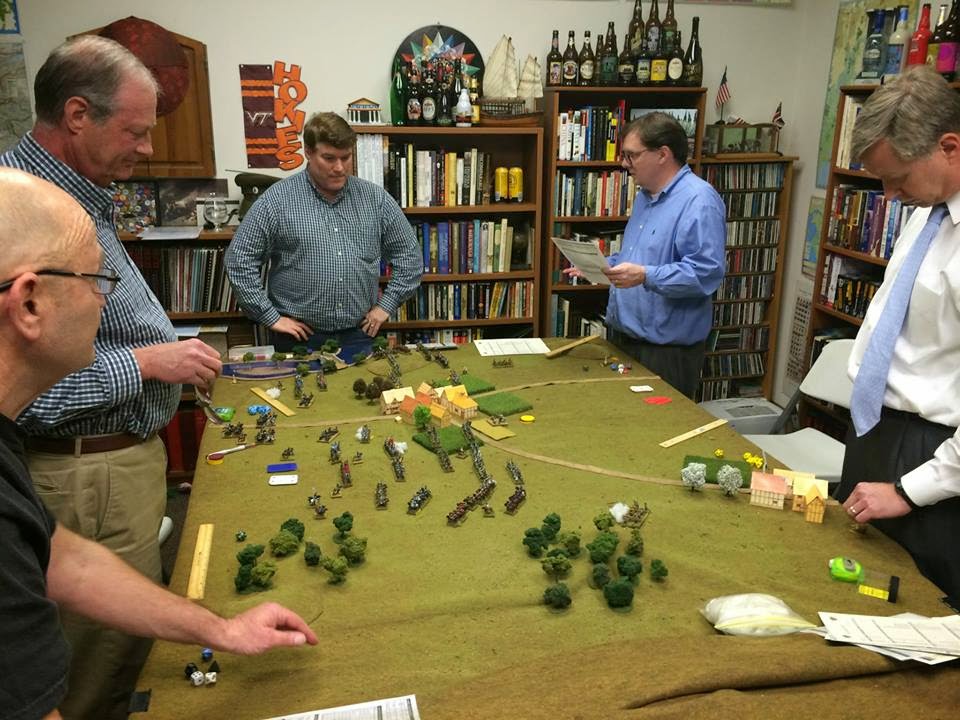 The firefight, with Austrian cavalry coming to support. 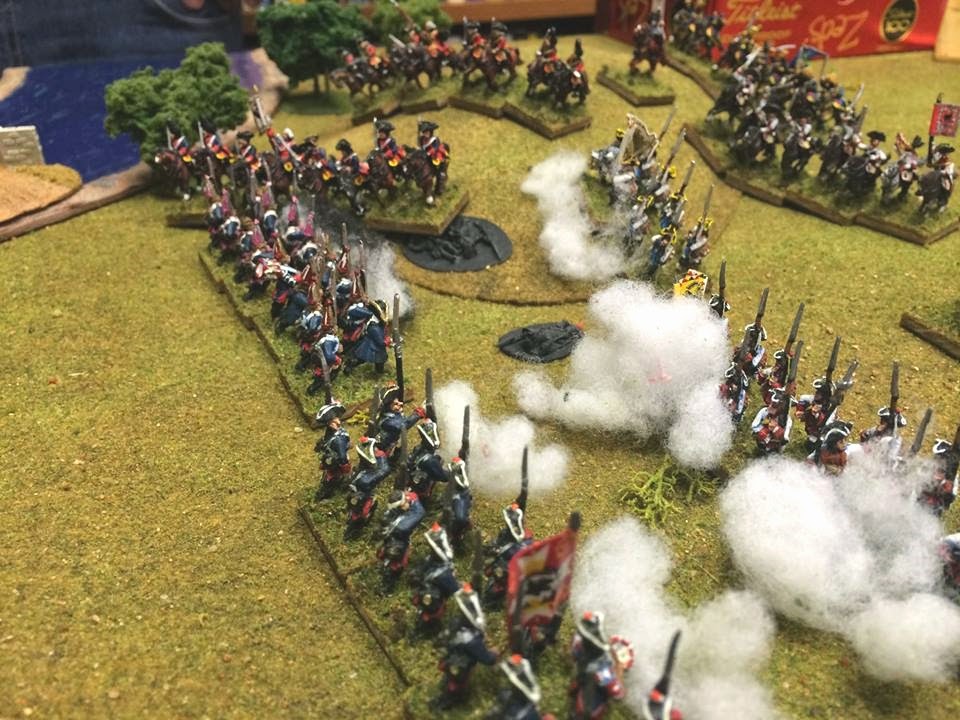 The Prussian right wing was saved by the fantastic 1st Hussars (Green) regiment that withstood a flank attack, routed their attacker, then charged the Austrian Cuirassier and routing them too! Austrian command Eric C. was later heard to say, "What the hell just happened?!"

The 1st getting hit on the flank: 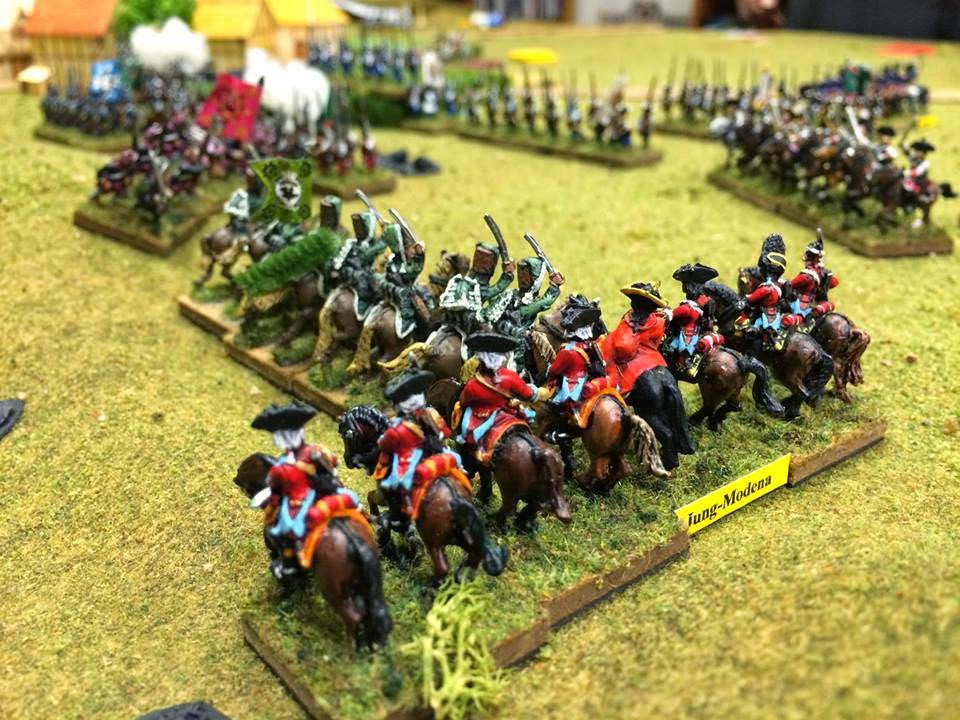 The1st Hussars turning to face and routing the Austrians Dragoons 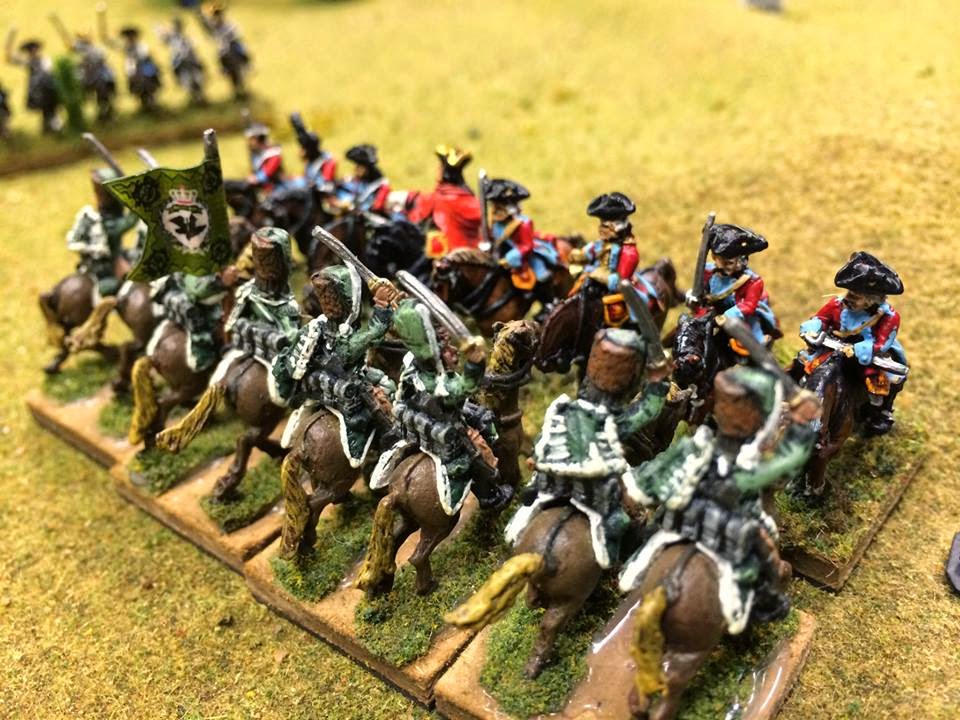 This crushed the hopes of the Austrian commander in turning the Prussian right flank.

Both sides were down to 10 morale chips when we called it an evening, considering the Austrians had about 20 more impetus to start the game, that shows you how much the Prussians damaged the Austrians.

Players were exhausted but happy with the thrills of the game. More Piquet and Seven Years War to come!

VERY nice,it is the first time I've seen anyone wargaming in coller and tie.

Great report, Eric!
As much as I enjoy FoB, there is still something special about classic Piquet, too!

Eric C, has to come to the game directly from work so he tends to be pretty well dressed, since he is a lawyer. Good group of people.

Its good to see C2 getting a work out. I have not played Piquet in a while.

Have you tried Maurice ?

Dudley! So good to see you still lurking about!

Send me your current email to eburgess@carolina.rr.com

Bought Maurice, but not sure why, other than it was pretty. Haven't played it. Read through the rules once. Need to sell it to fund my SYW painting project. :-)

Hi Eric
Agree with you about Maurice. See my report on the Wargamorium Blog. Luckily I did not buy them but my friend did.
Game looks great.
Keep posting
Regards
Robert

Hi Robert! Good to hear from you!

I have another battle report to write this weekend.

Hard to believe, but this second battle was even better than the first!