This is part 1 of an ahistorical battle pitting my French army vs. my newly acquired Hanover-Hesse-Kassel army.

There were 5 players in this game:

It was Steve's first Piquet game so we took some time to explain the basic rules and he caught on extremely fast.

There were about 21 to 25 units per side, with the Allied army's objective to destroy the French army. 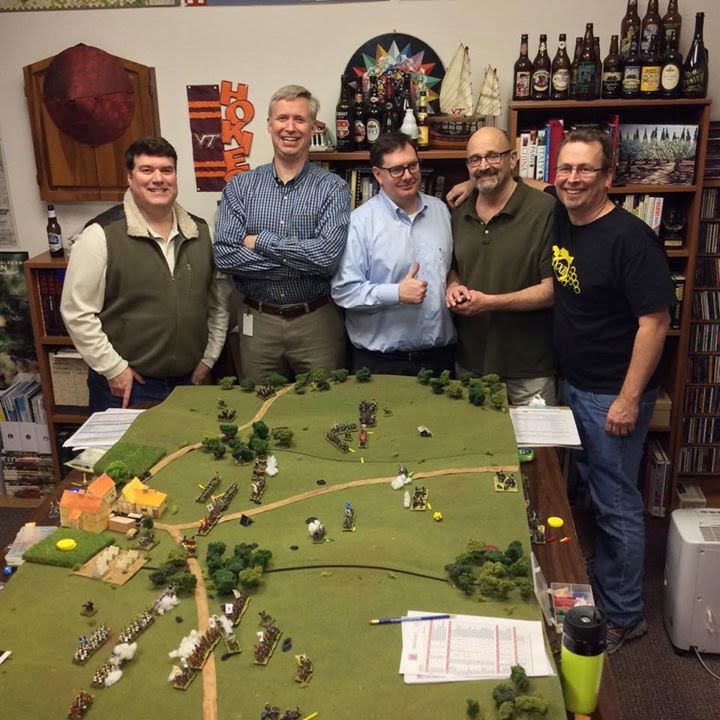 Charles used his iPod to do a stop motion video, by taking over 300 photos over the course of the evening, which he put on his YouTube channel which you can watch here (French on left, Allies on right):

Keep an eye on my French cavalry in the bottom of the screen just get HAMMERED by Charles' Hanoverian Horse!!

Charles, posted a fly-by across the Hanoverian front looking at the carnage during the game:

Here are some photos of the game which I think you will enjoy.

See the prior post to see the "Lay of the Land" before the battle started.
http://dinofbattle.blogspot.com/2015/02/syw-western-theatre-french-vs-hanover.html

Shows 3 of the 9 Hanoverian regiments arrayed in front of my French right wing position. 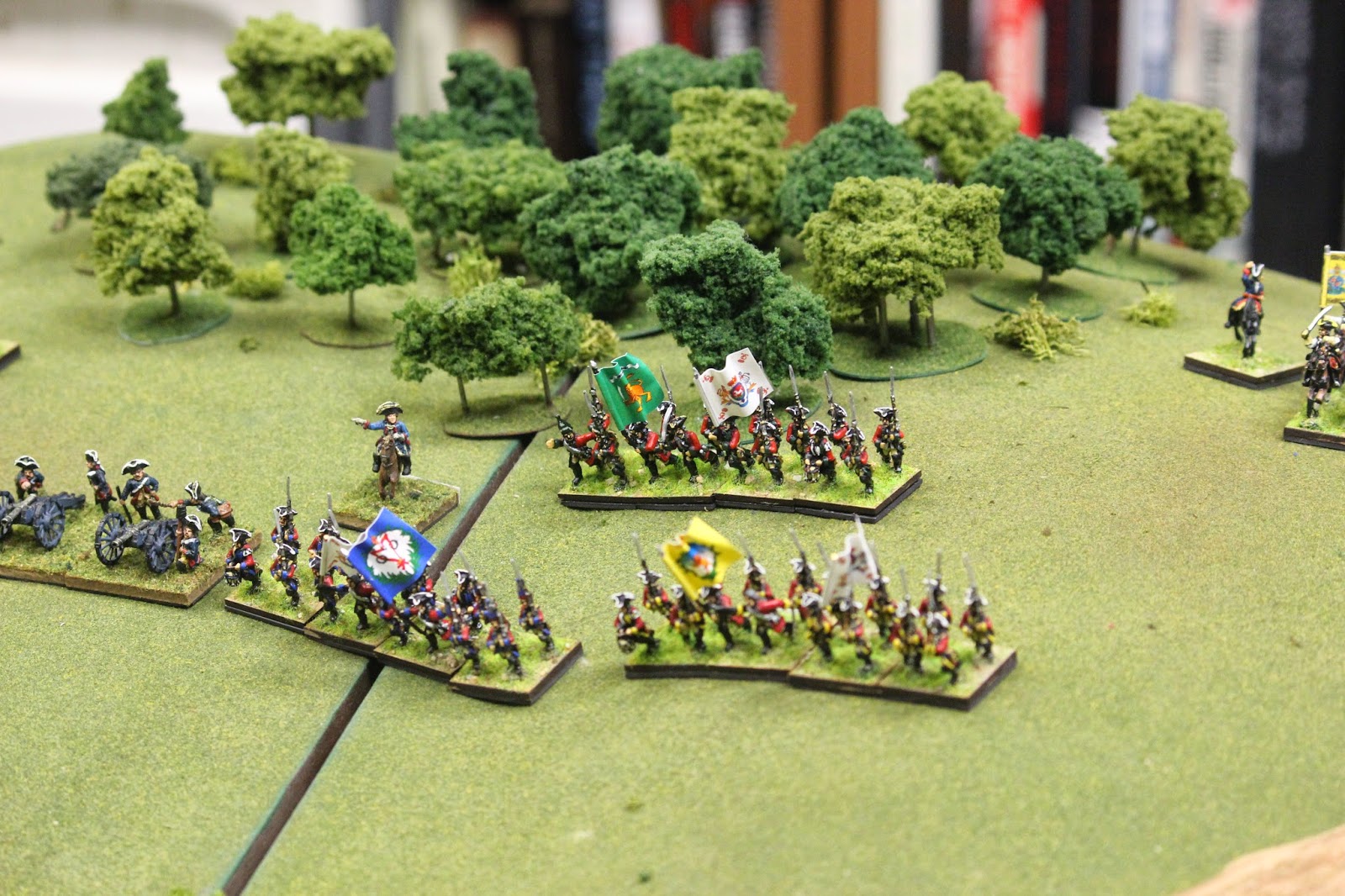 Doesn't take long before the Hanoverians advance and tear through one of my French regiments (see the two black casualty makers on the left of the French battle line?) 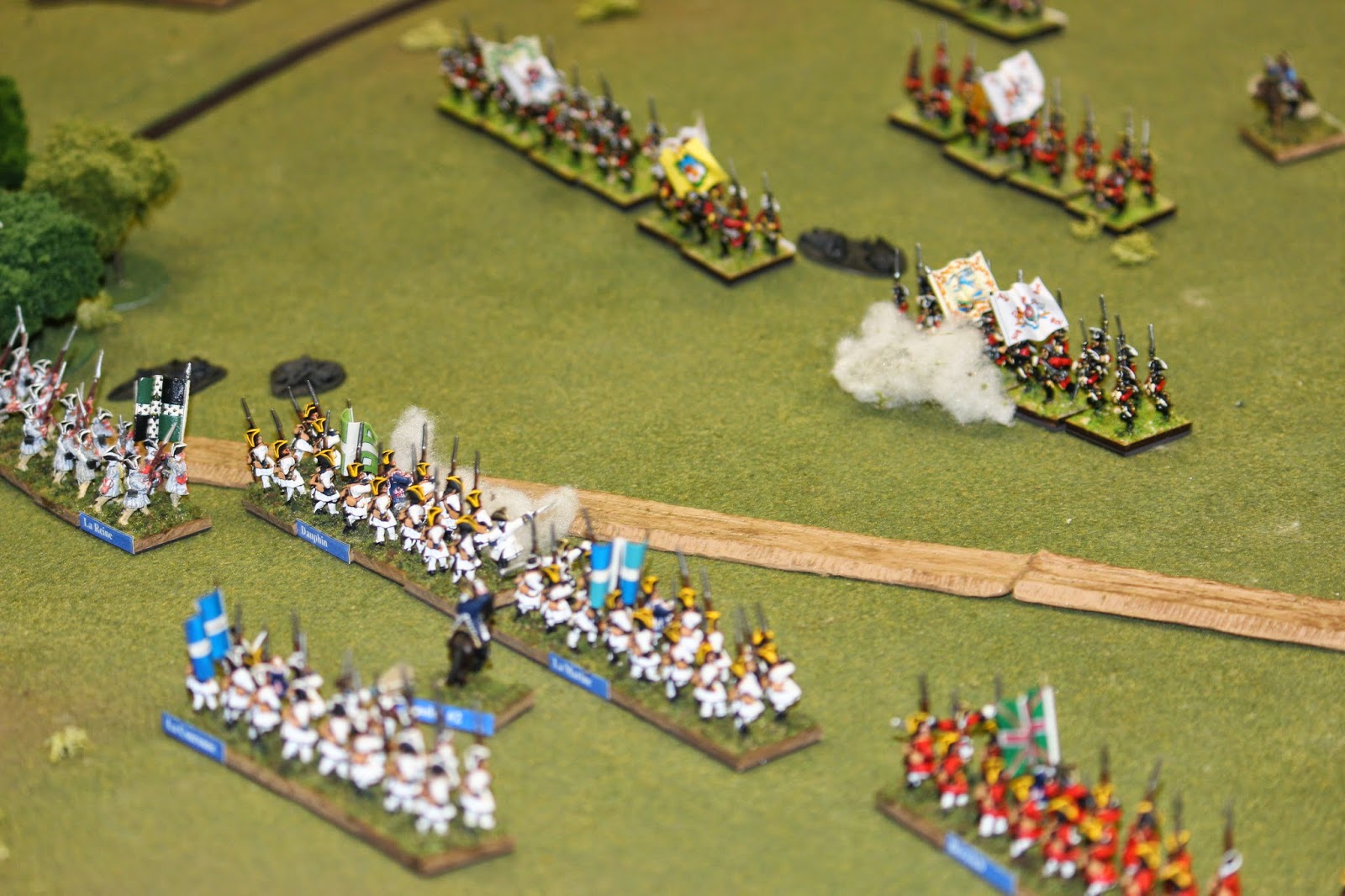 Hesse-Kassel Prinz Karl regiment attempts to take out the French Heavy guns on a rise and gets pummeled in return. Yellow poker chip are our Opp Fire chips. 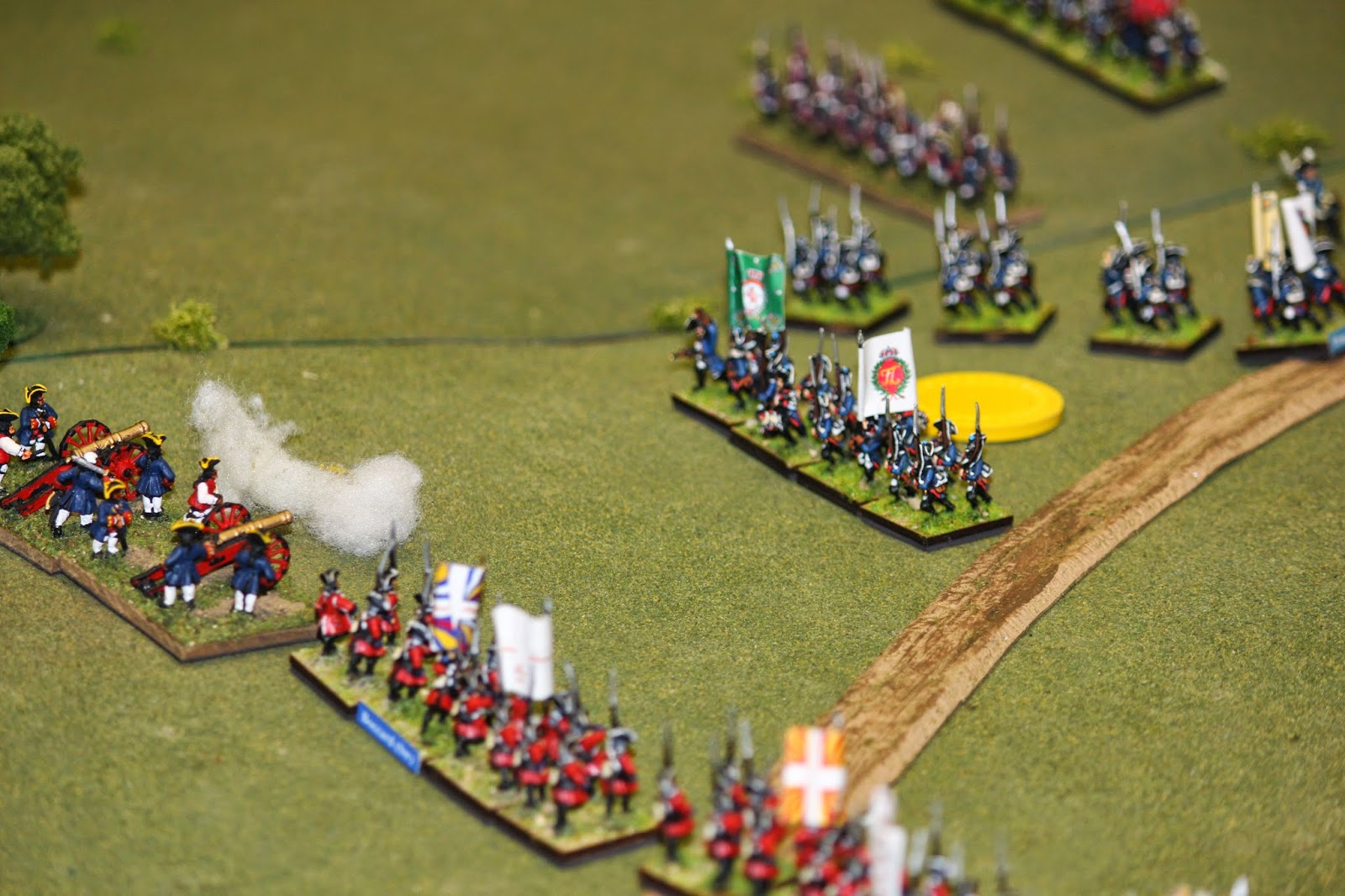 Meanwhile, my French cavalry on the right wing advance to threaten the Hanoverian line. 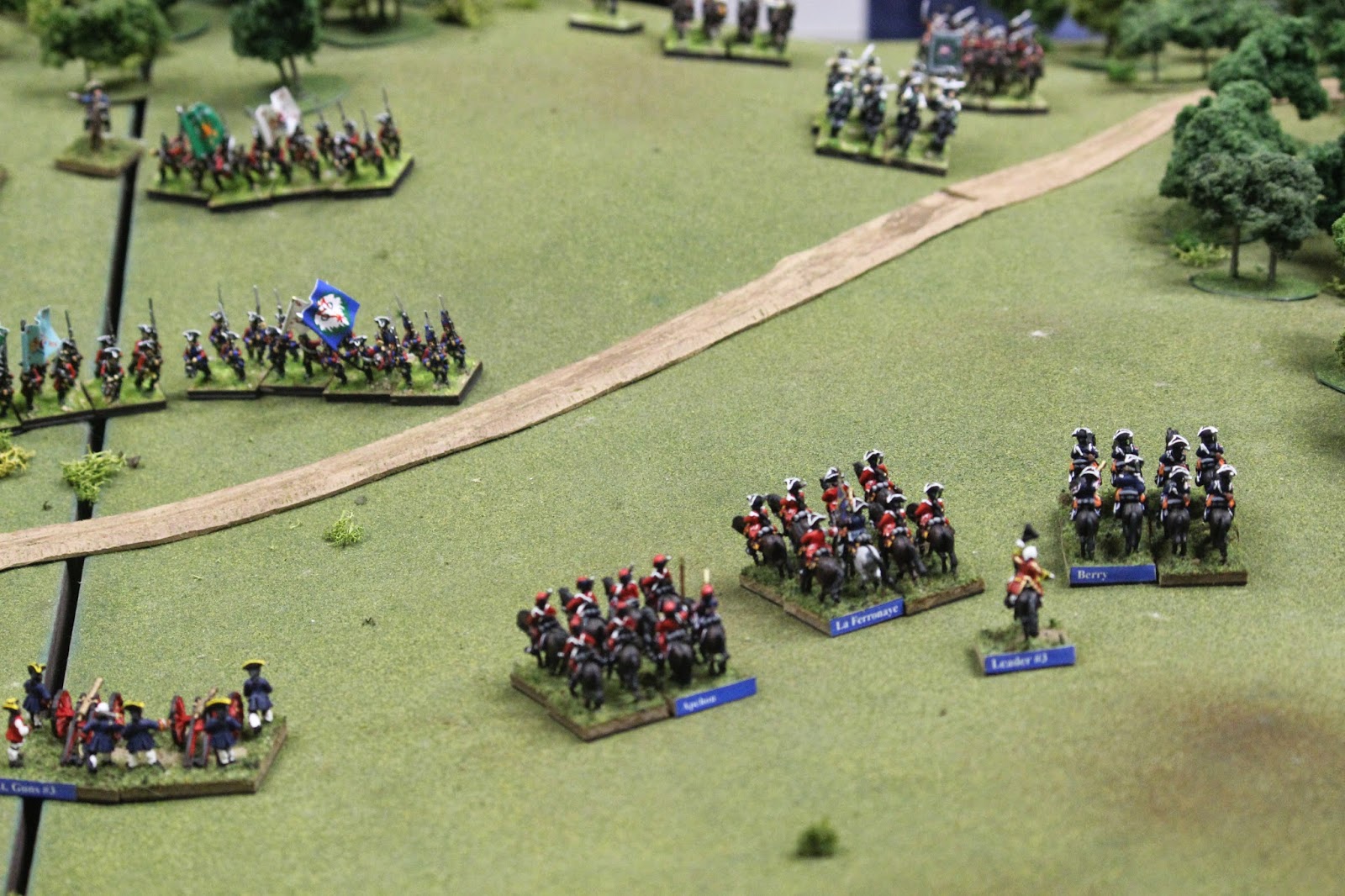 Nice shot of the Hanoverian advance, as I slowly pull back my French line to regroup. 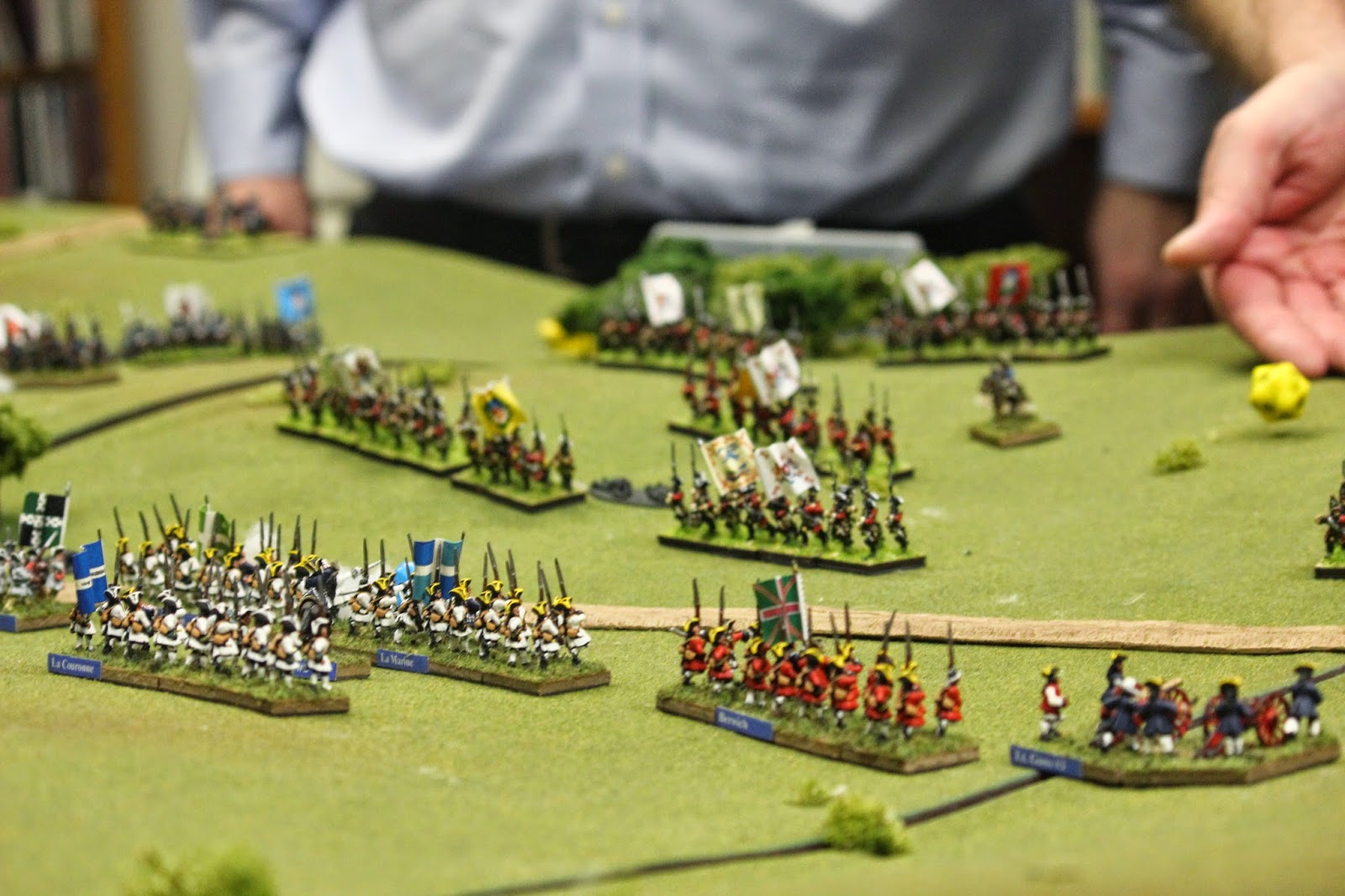 Love this angle of the French cavalry (2 Dragoons, and the Heavy Cuirass Berry Regiment). Note, the French Cavalry pulled an UP1 in melee card during the Army Characterization process. You will see that it did little to help them so far in the battle. 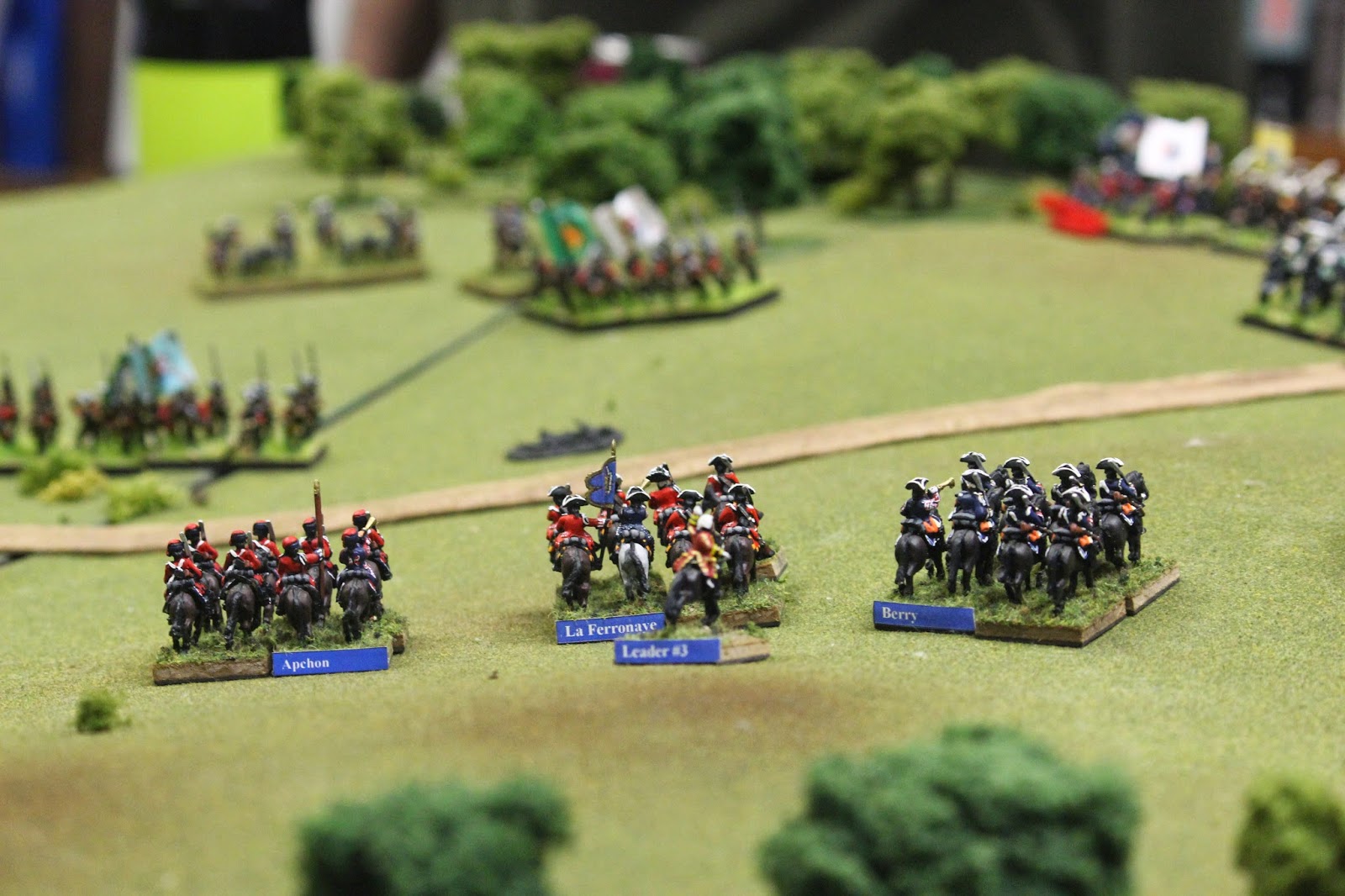 In the center left, Eric C's Swiss and French are pounding on the Hessians. Not pictured was the du Roi regiment of French cavalry getting completely annihilated by Hessian Grenadiers from volley fire. It was ugly, lost all four stands in one shot. The Hessian infantry commander, Major-General von Kielmansegg, was shot from the saddle leading the attack, which through the entire Hessian infantry into confusion (out of command). 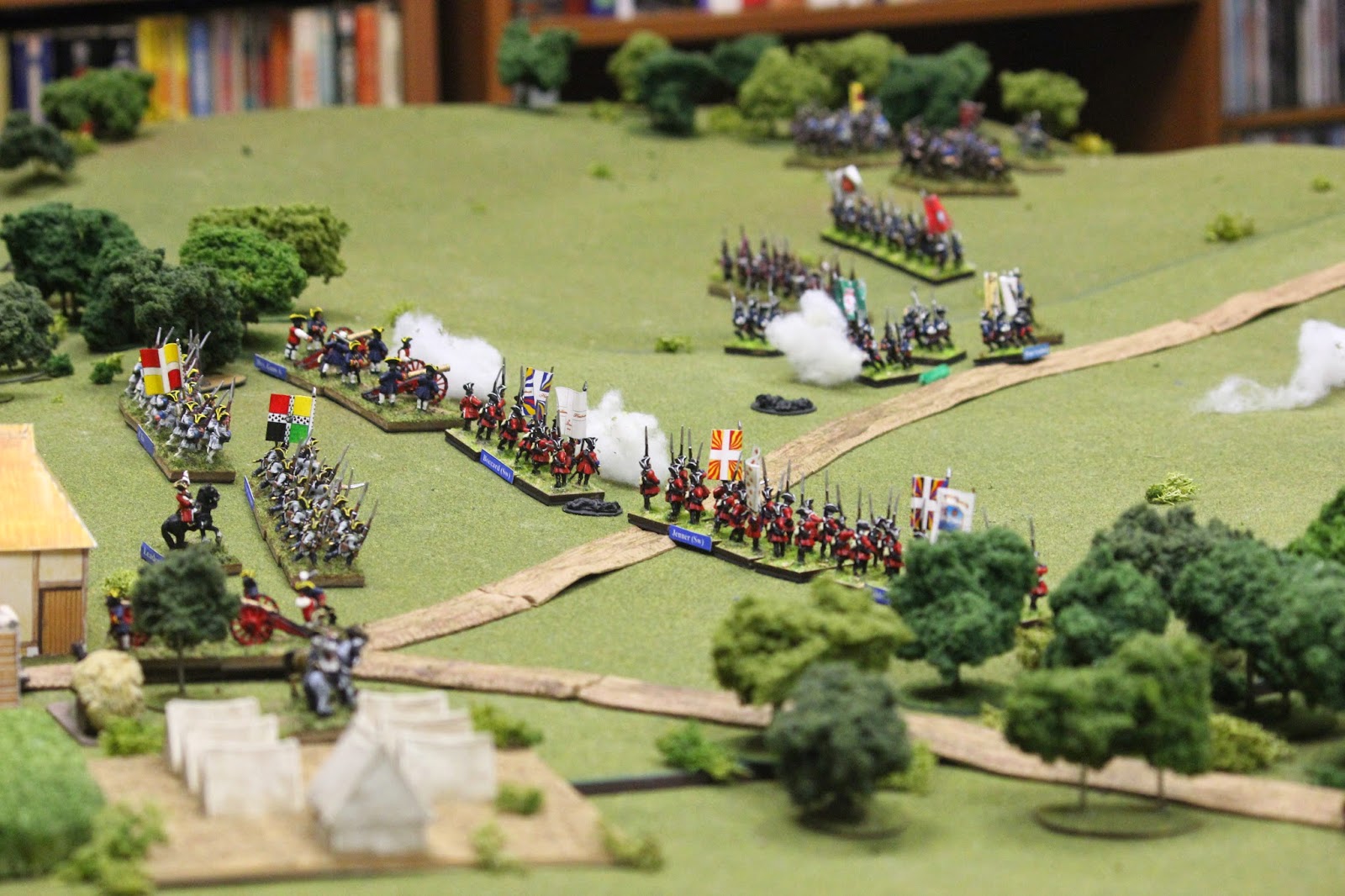 Good angled view of the Hanoverian attack against my French on the right. 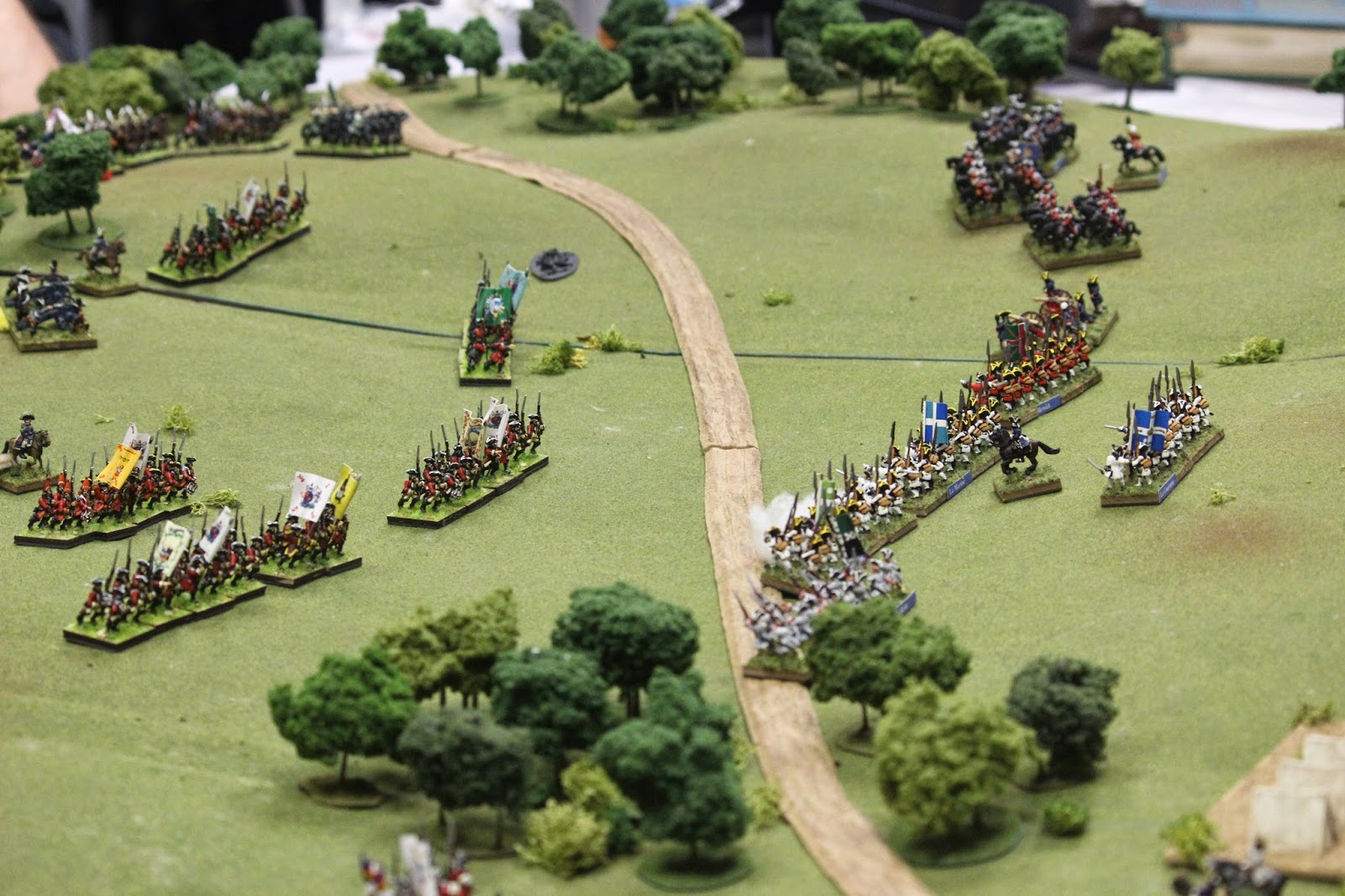 General view of the Hessian (foreground) and Hanoverian (background) attack. 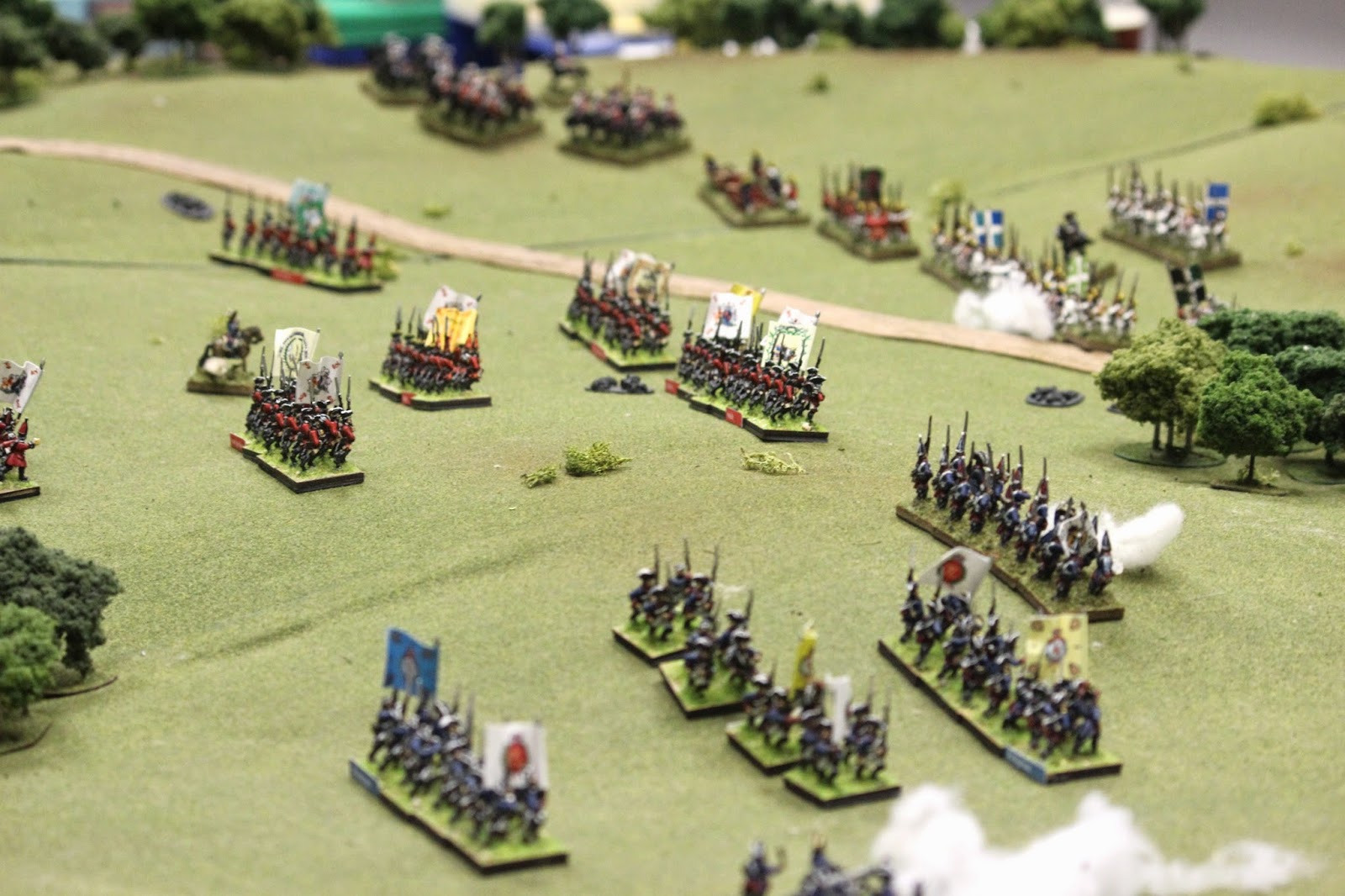 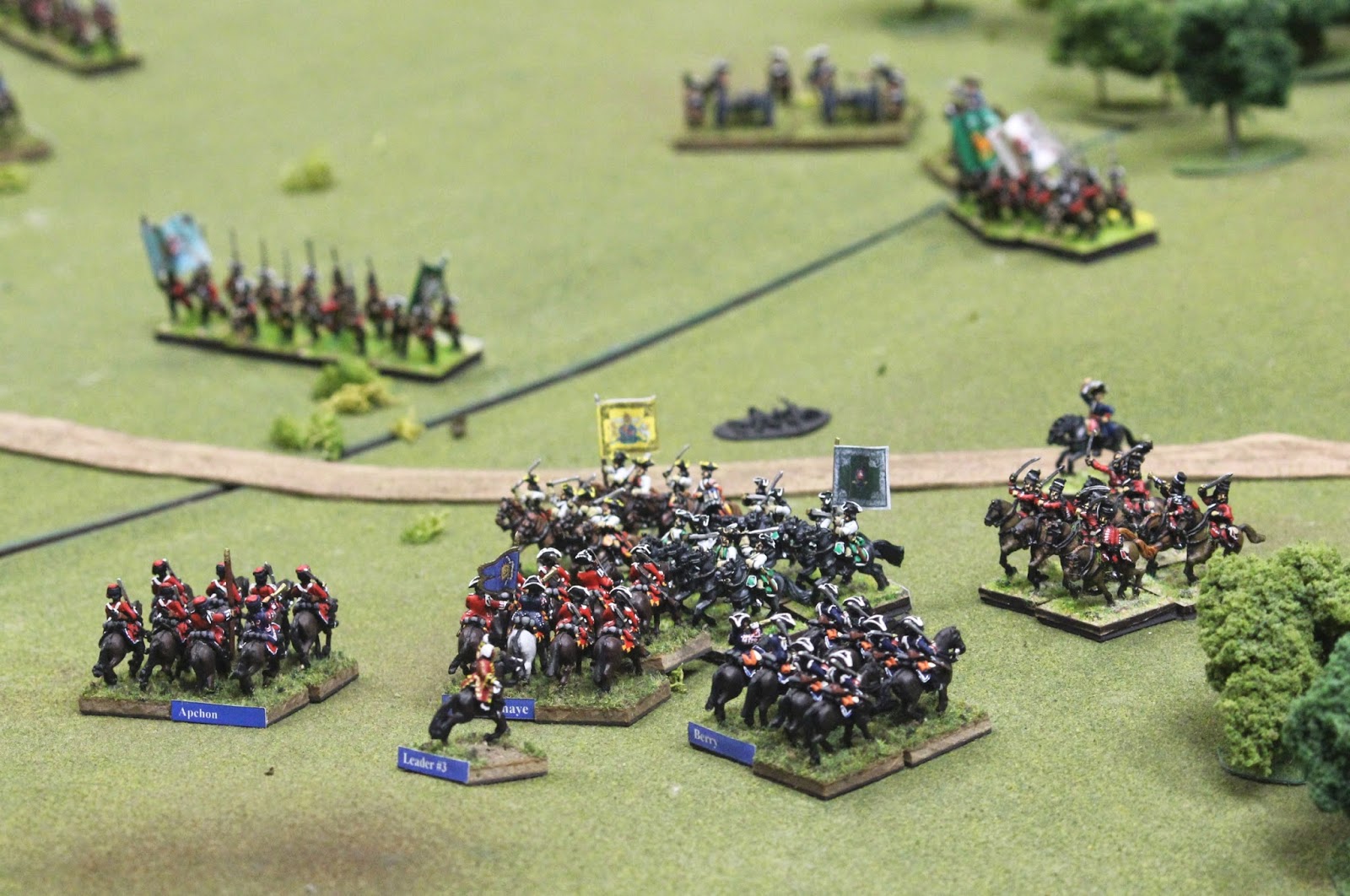 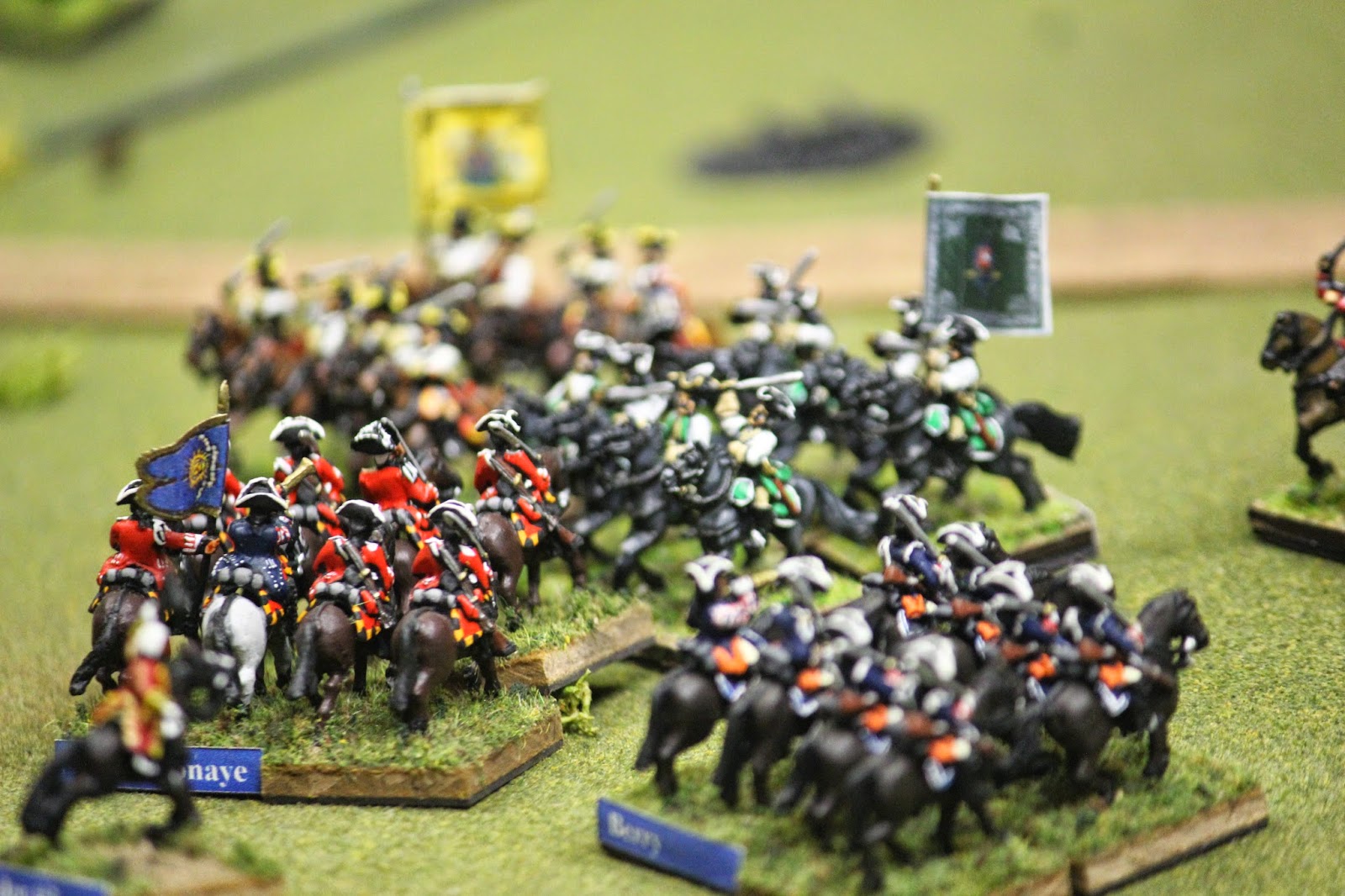 Hanoverians have dressed their lines and are coming in for the kill. 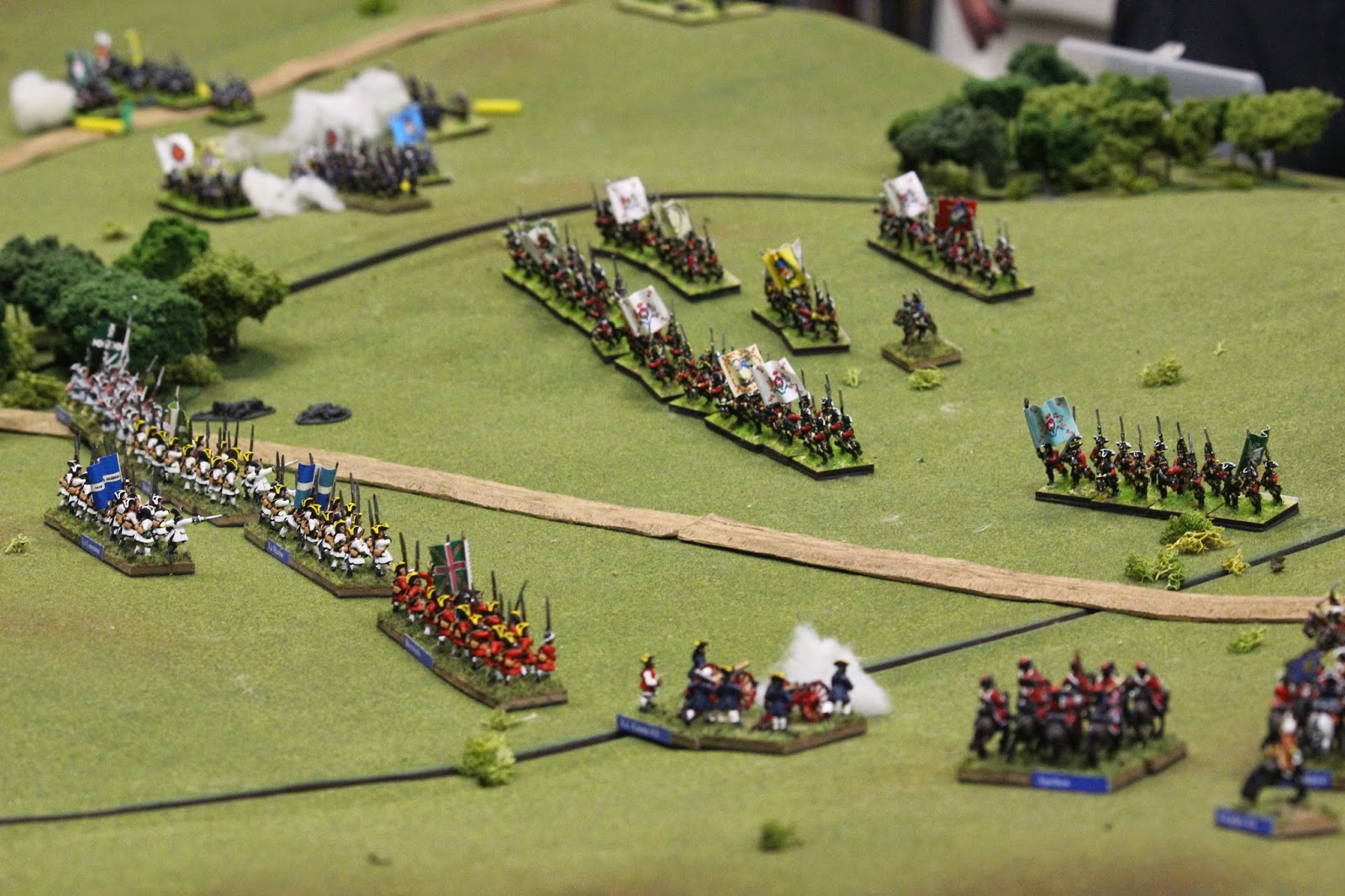 Disaster (must watch on the video) for the French Dragoons!!! Both French Dragoon regiments are routed by the Hanoverian Heavy horse. There are four black casualty markers on the ground where the one-sided melee occurred. 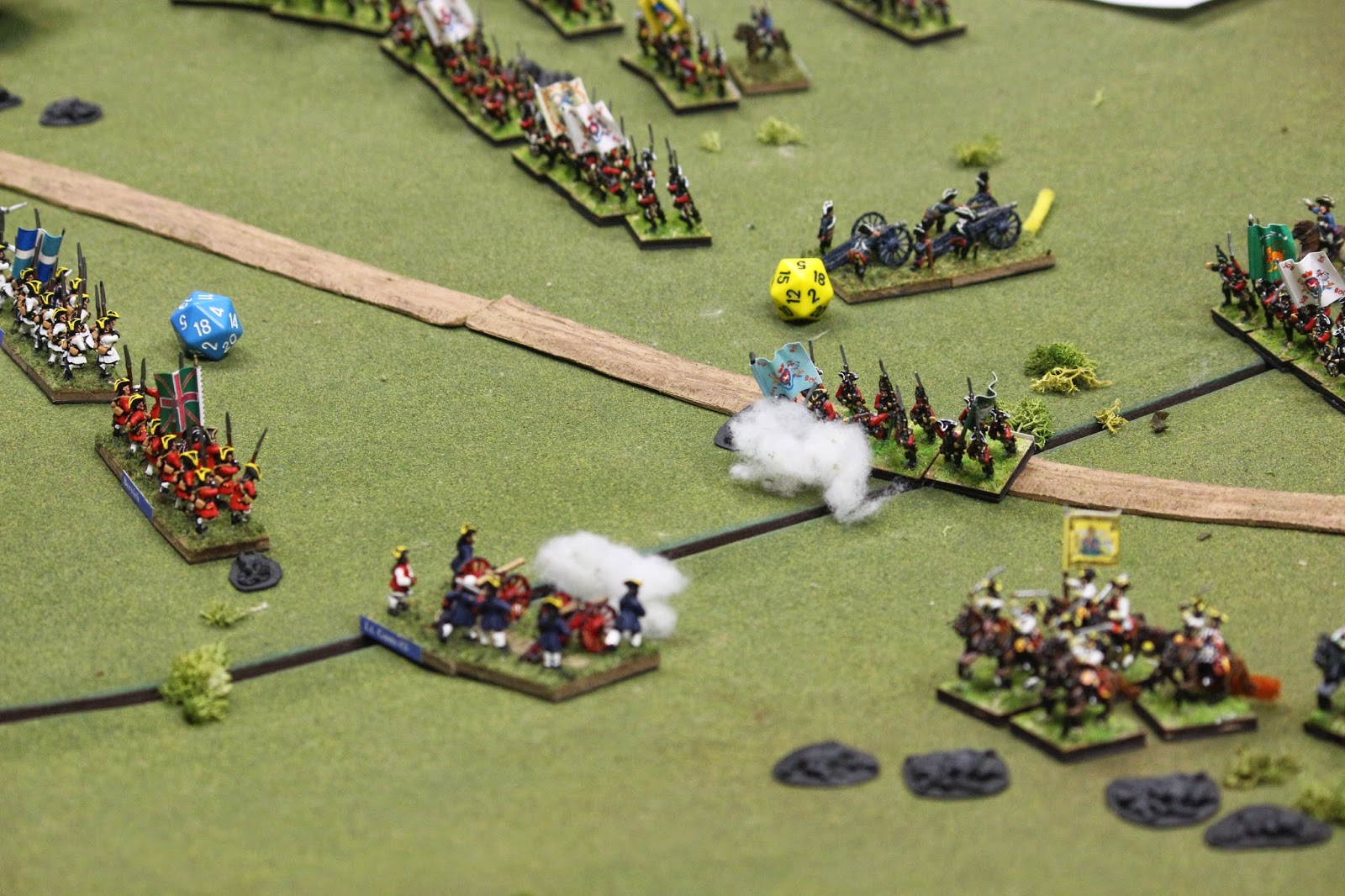 Berry Regiment charges the weak Prussian Seydlitz Hussars (red) and only managed to inflict one stand of damage and force them to retreat. Not a good day for the French cavalry at this point in the battle. Also, my right flank of the French infantry line is exposed to a flank attack by these Hanoverian cavalry regiments. 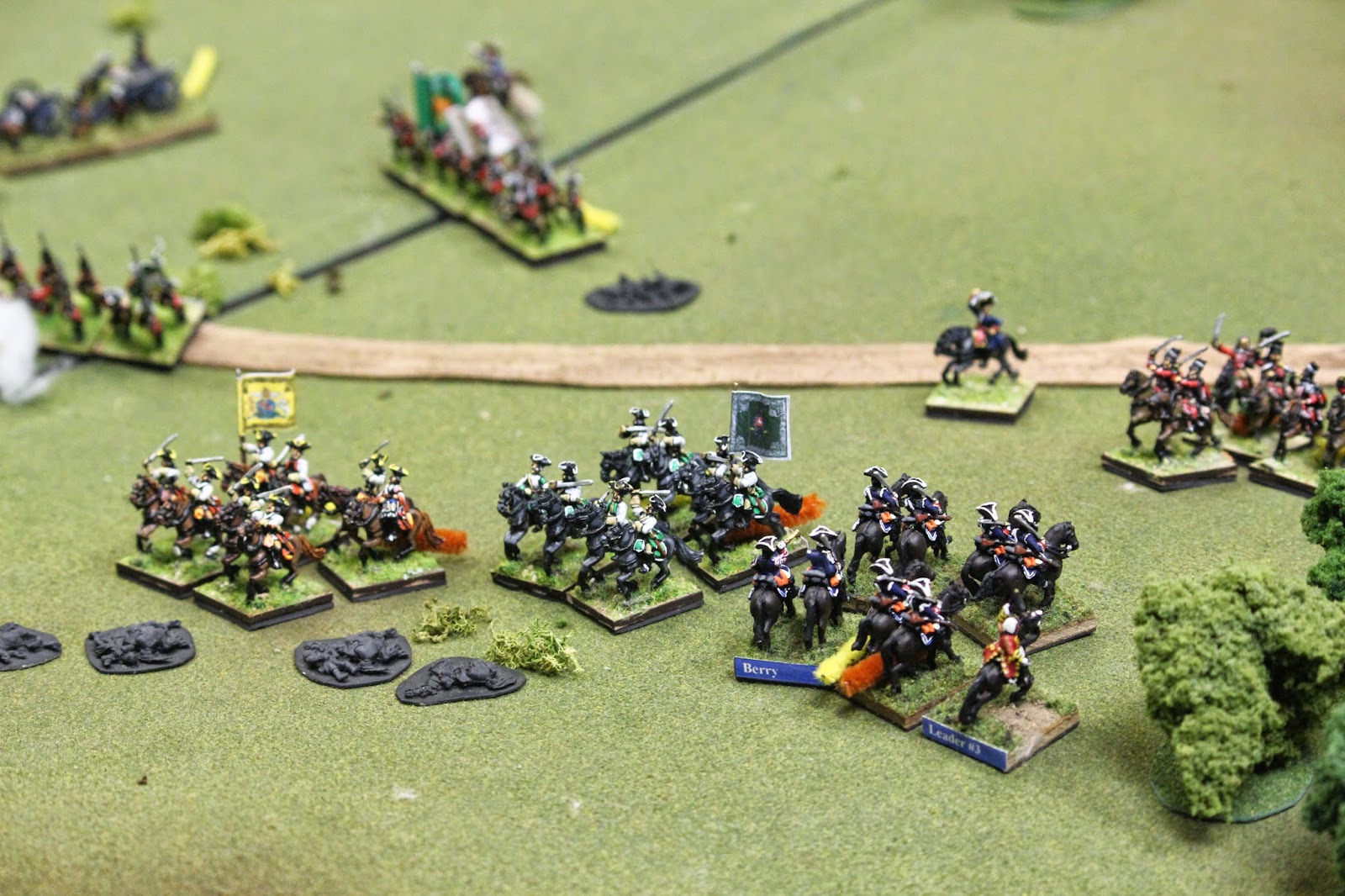 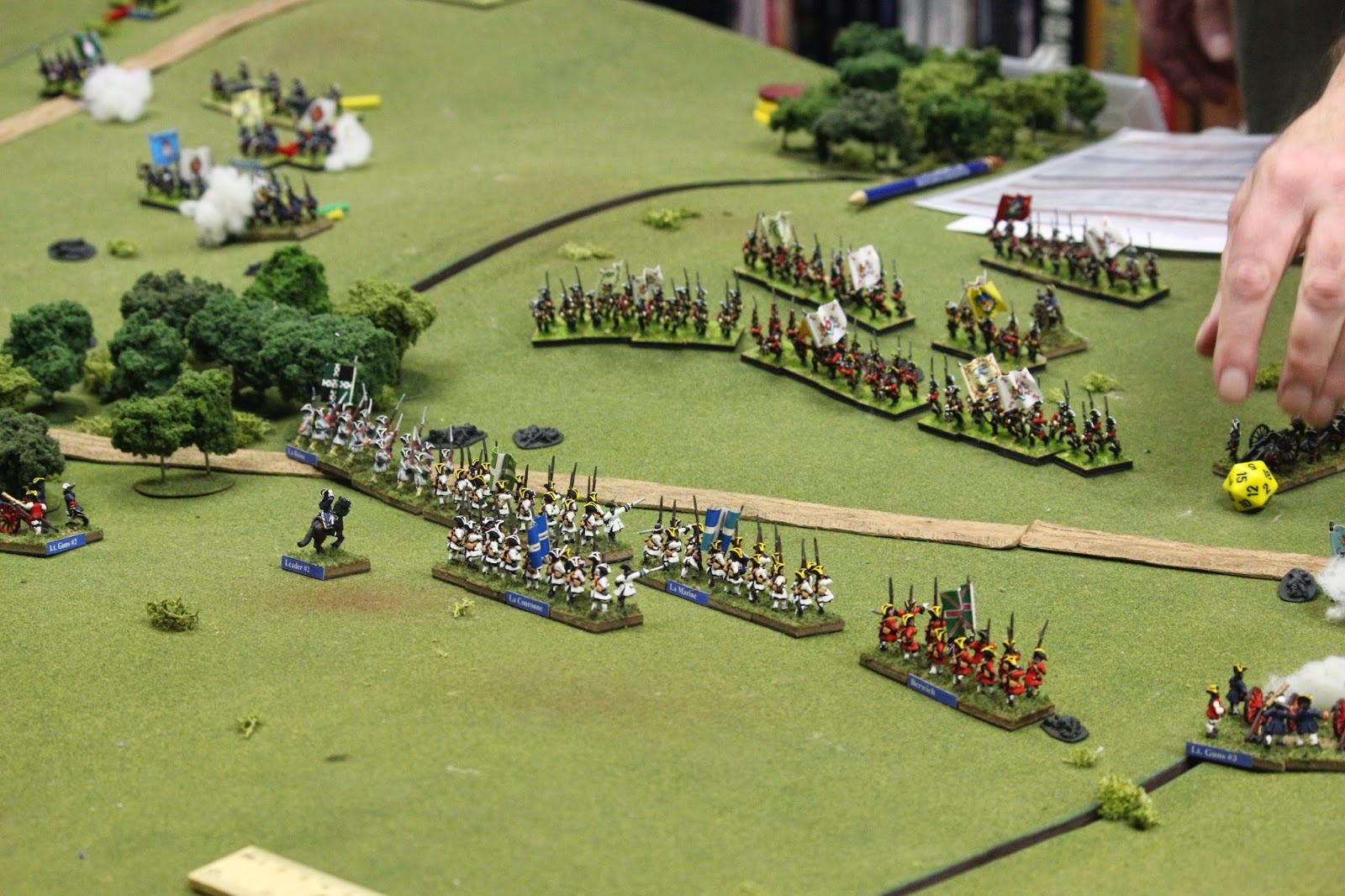 On the French left flank Mike and his Hessians attempt to out maneuver the French heavy battery, but can't seem to get the angle right. One Swiss regiment has been lost to Hessian Grenadier fire near the woods in the bottom right. I'm going to take my limbered gun battery and try to plug that hole before the Hessians can take advantage of it. 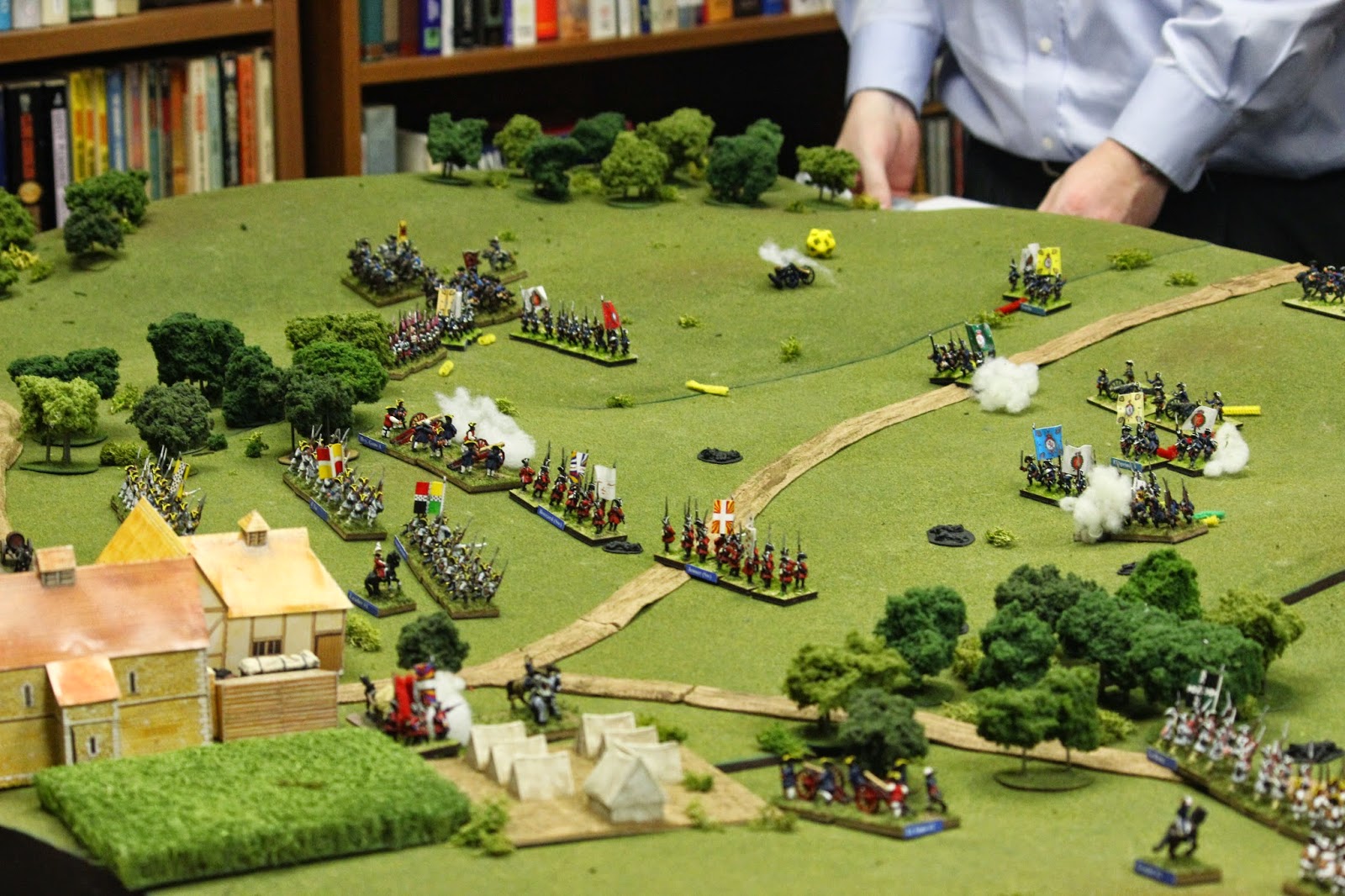 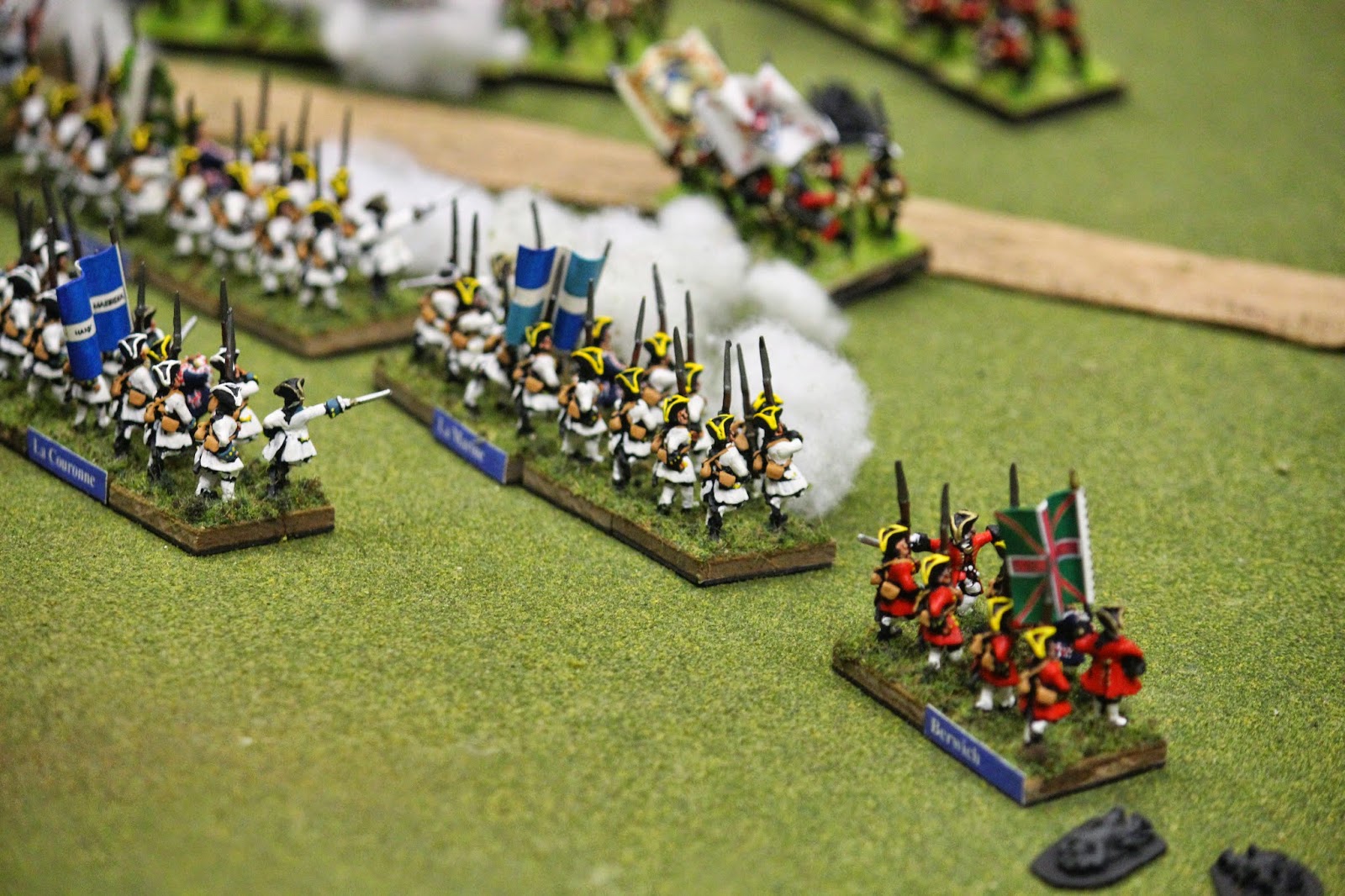 Here you can see that the French and Hanoverians are wearing each other down with musket volleys. 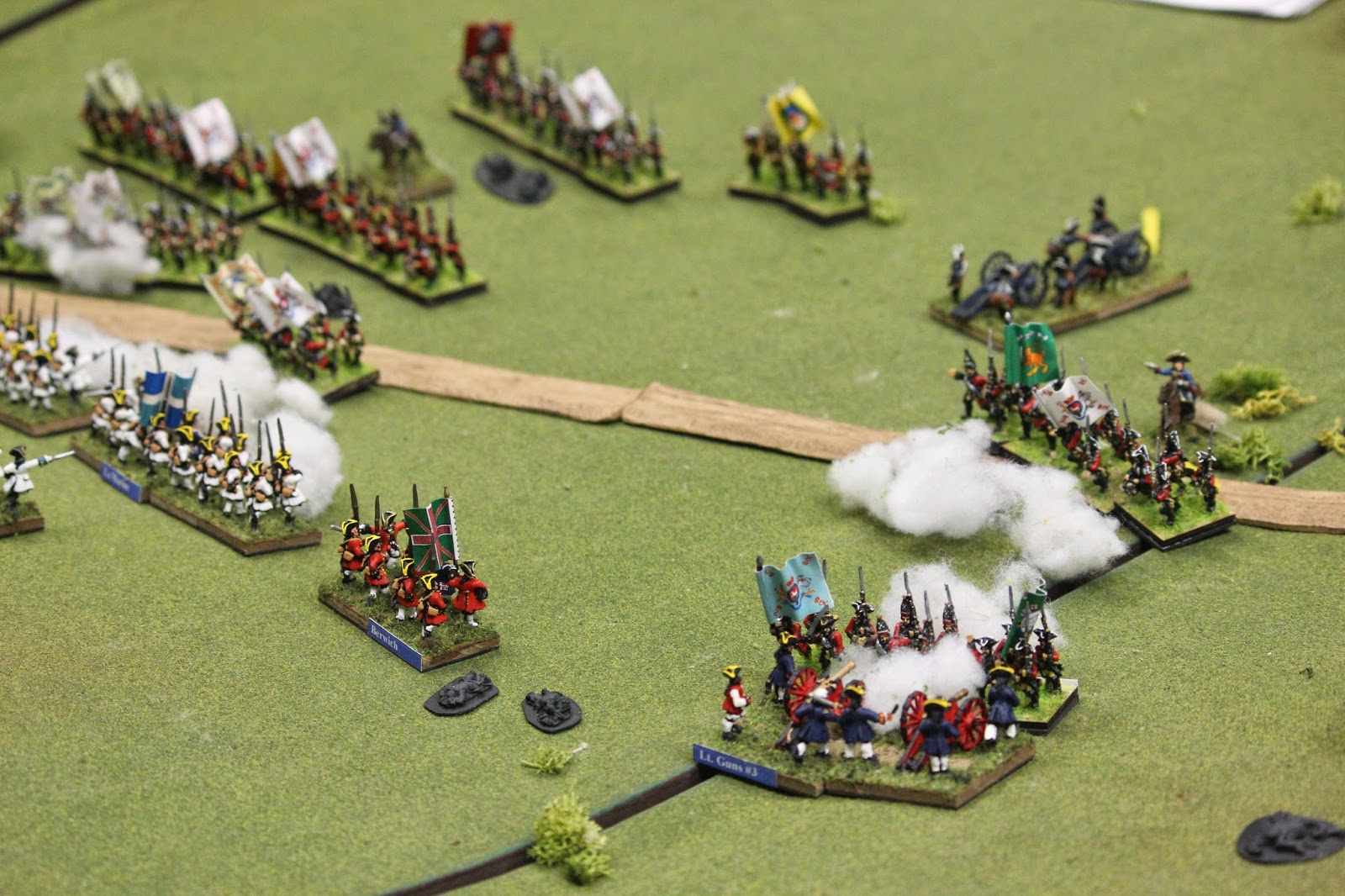 Charle's von Post Regiment (Hanover) attempts to launch a direct assault against the French medium guns. Both have fired and we are awaiting the Melee Resolution or reload cards to see who can get the victory here. 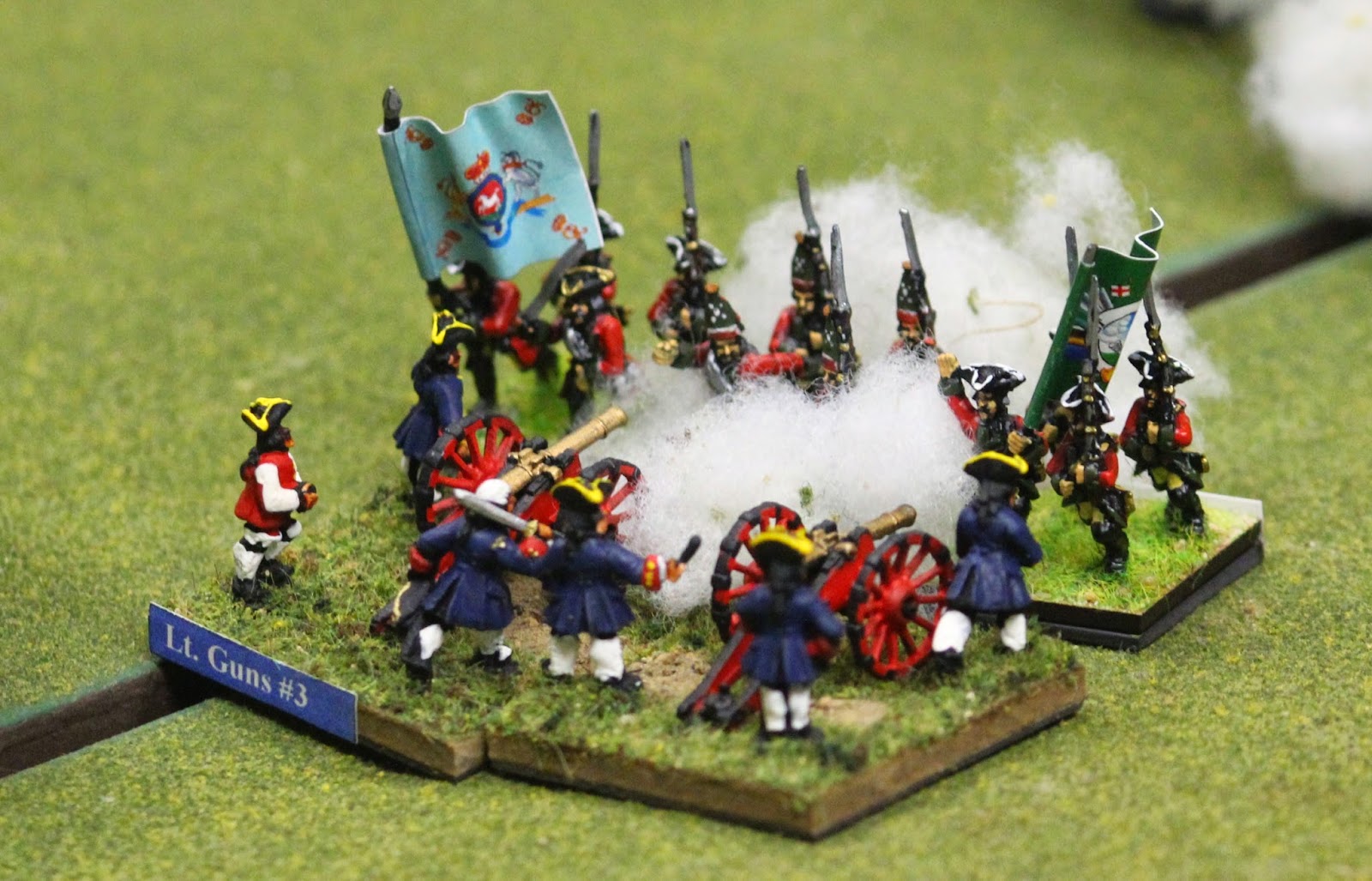 More general fire as the French attempt to retreat to by time and shore up their right flank. 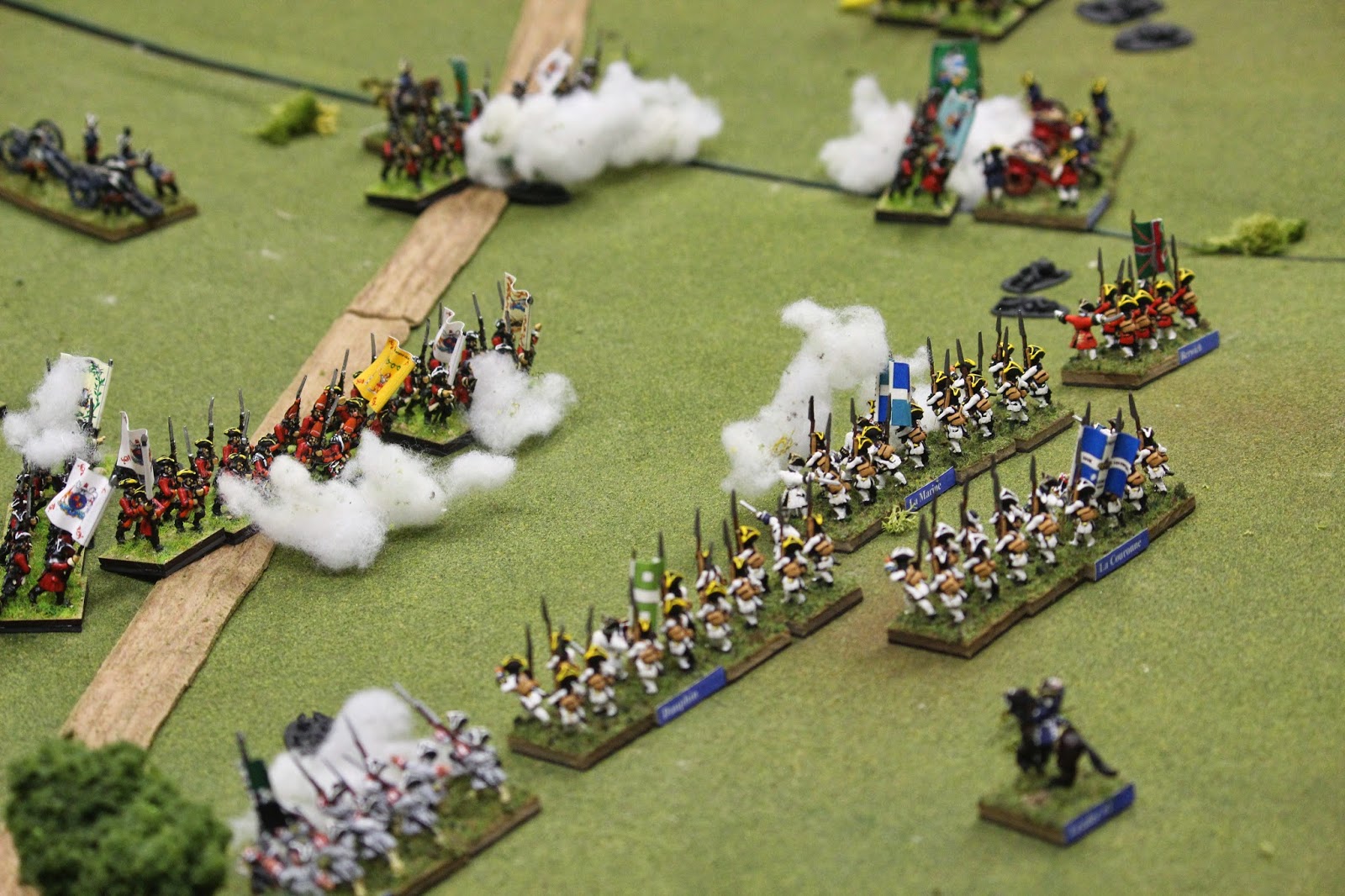 Shatter of musket fire can be heard all along the valley. 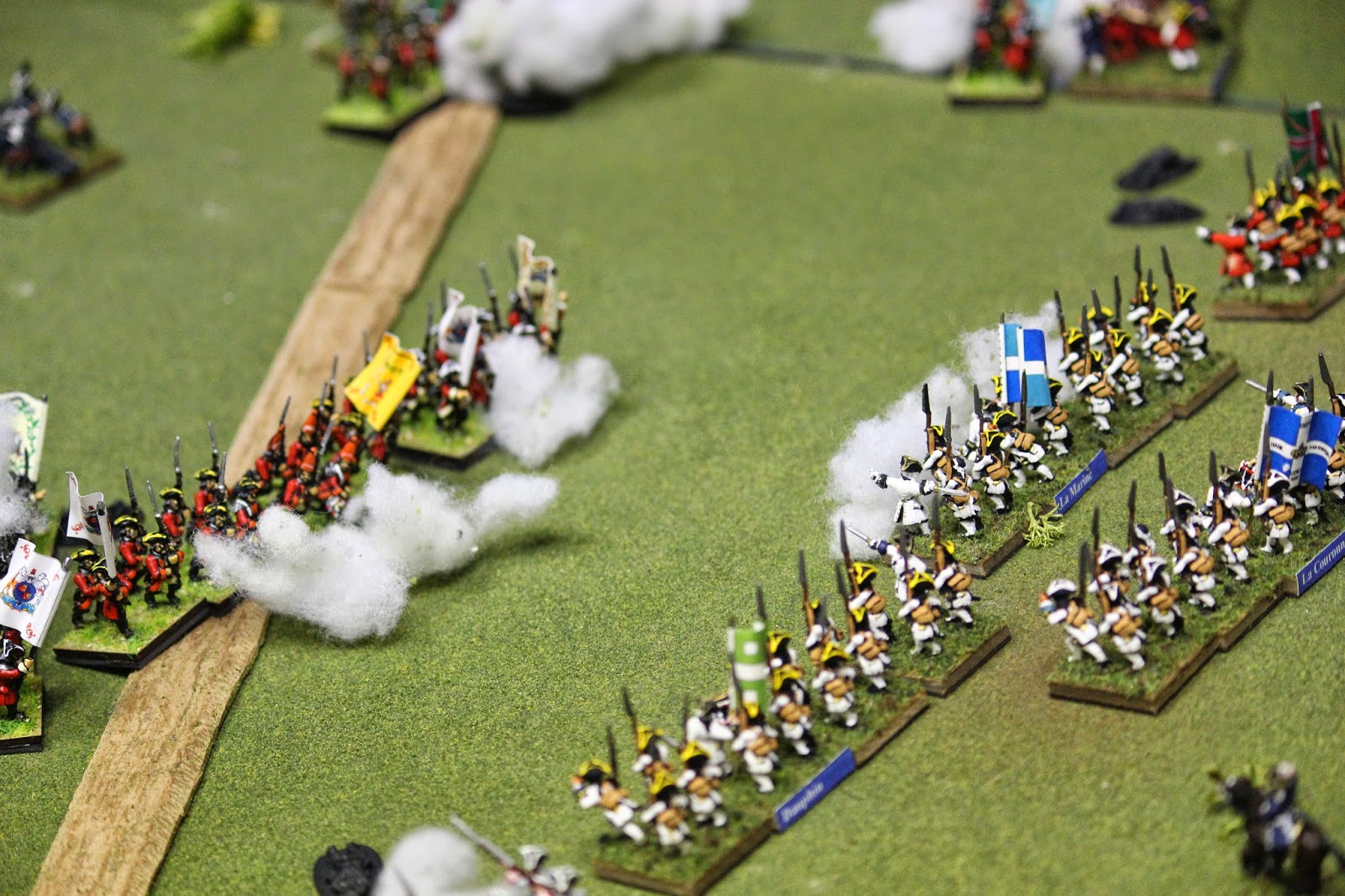 We had to halt the game after a couple hours of fighting due to time. We will finish the game this coming week. Here is a shot from the Allied point of view. This is the Hanoverian sector of the attack. 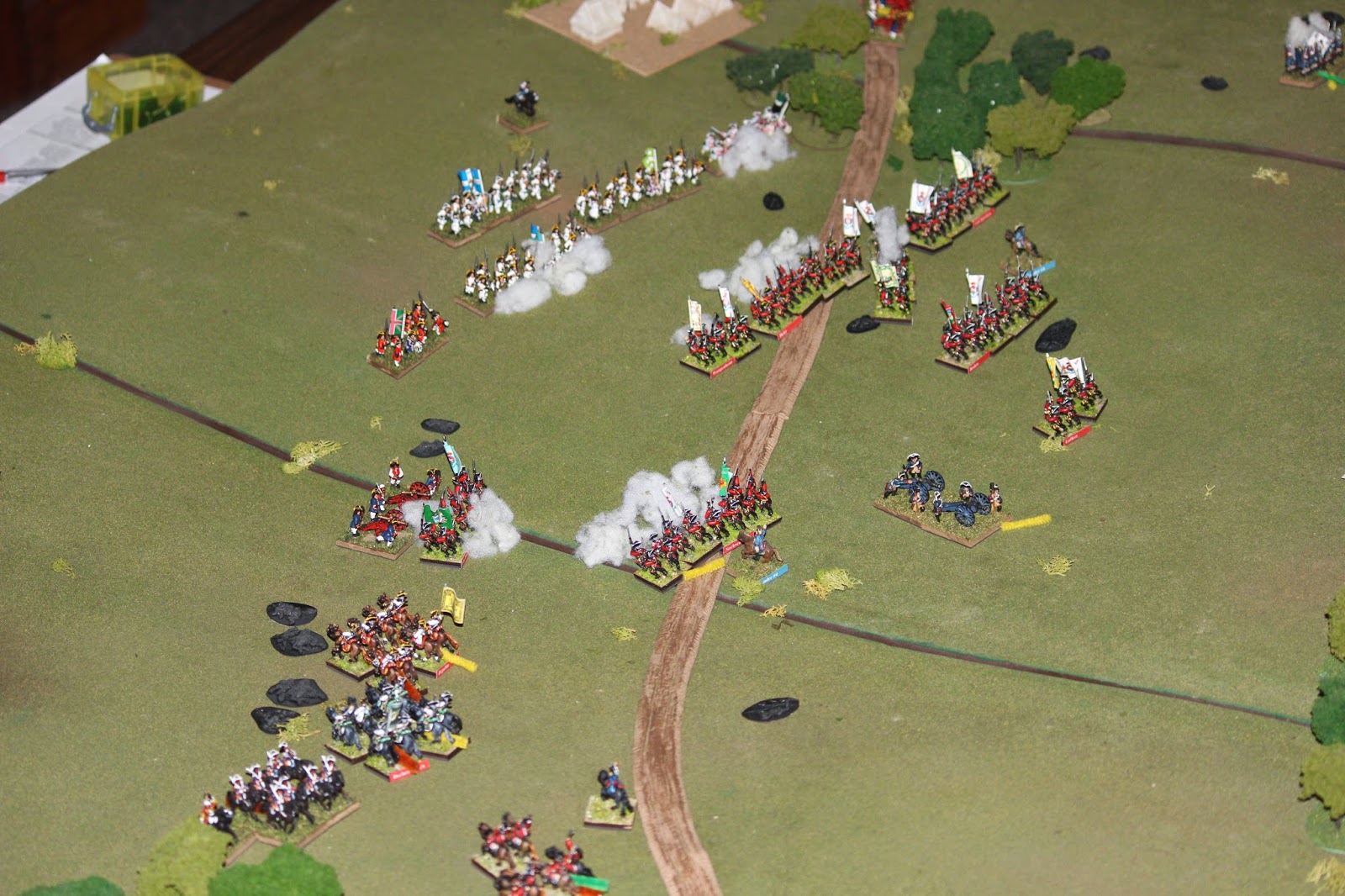 Here is the Hessian sector, where the French infantry commander, Marquis d'Armentières, was killed leading his troops into the gap the Hessian Grenadiers had created. You can see his overturned stand right in the gap above the woods in the bottom left of this photo. He was the only "skilled" French commander: 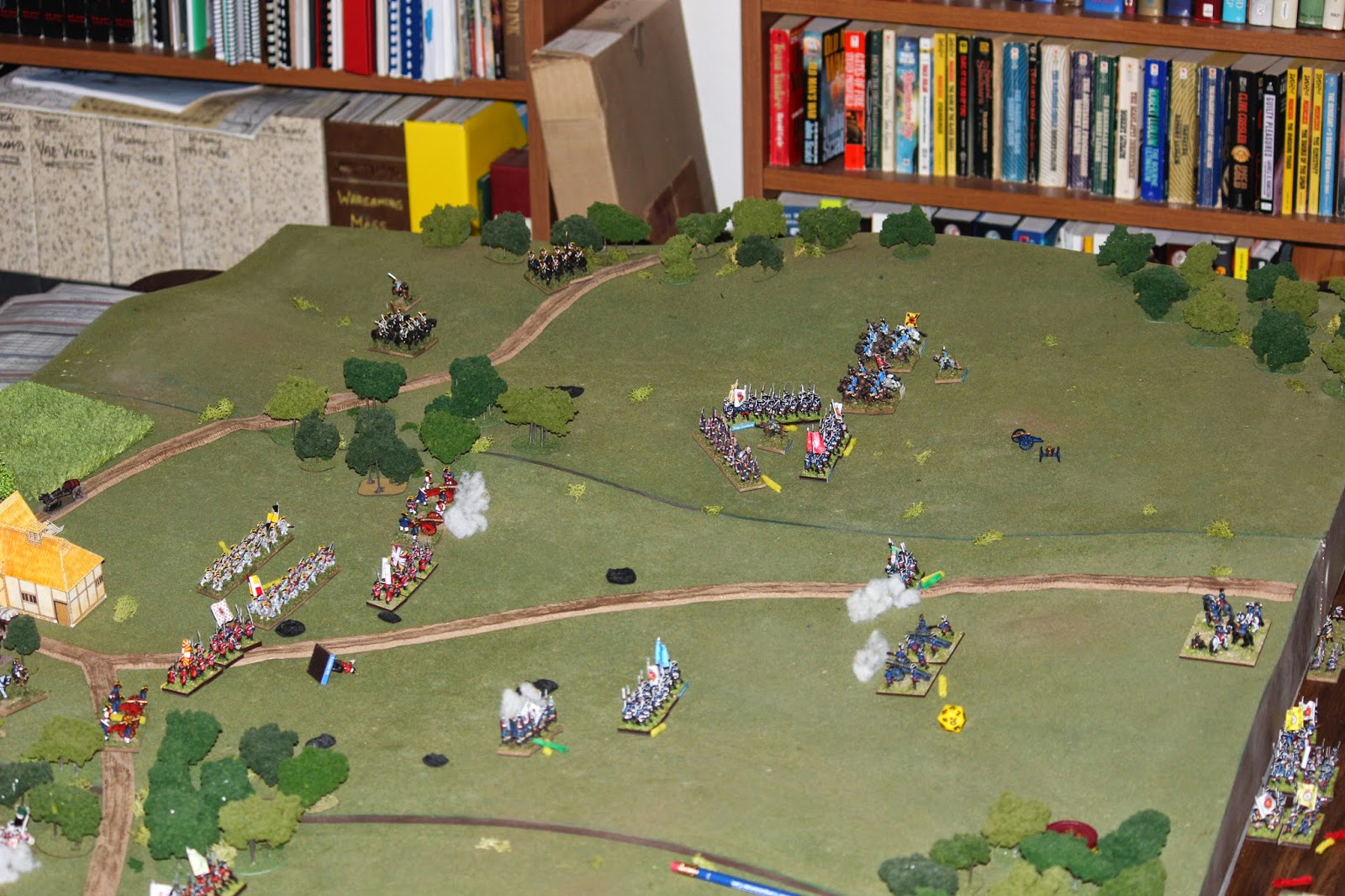 Parting shot. Love those scarlet coats of the Hanoverian infantry! 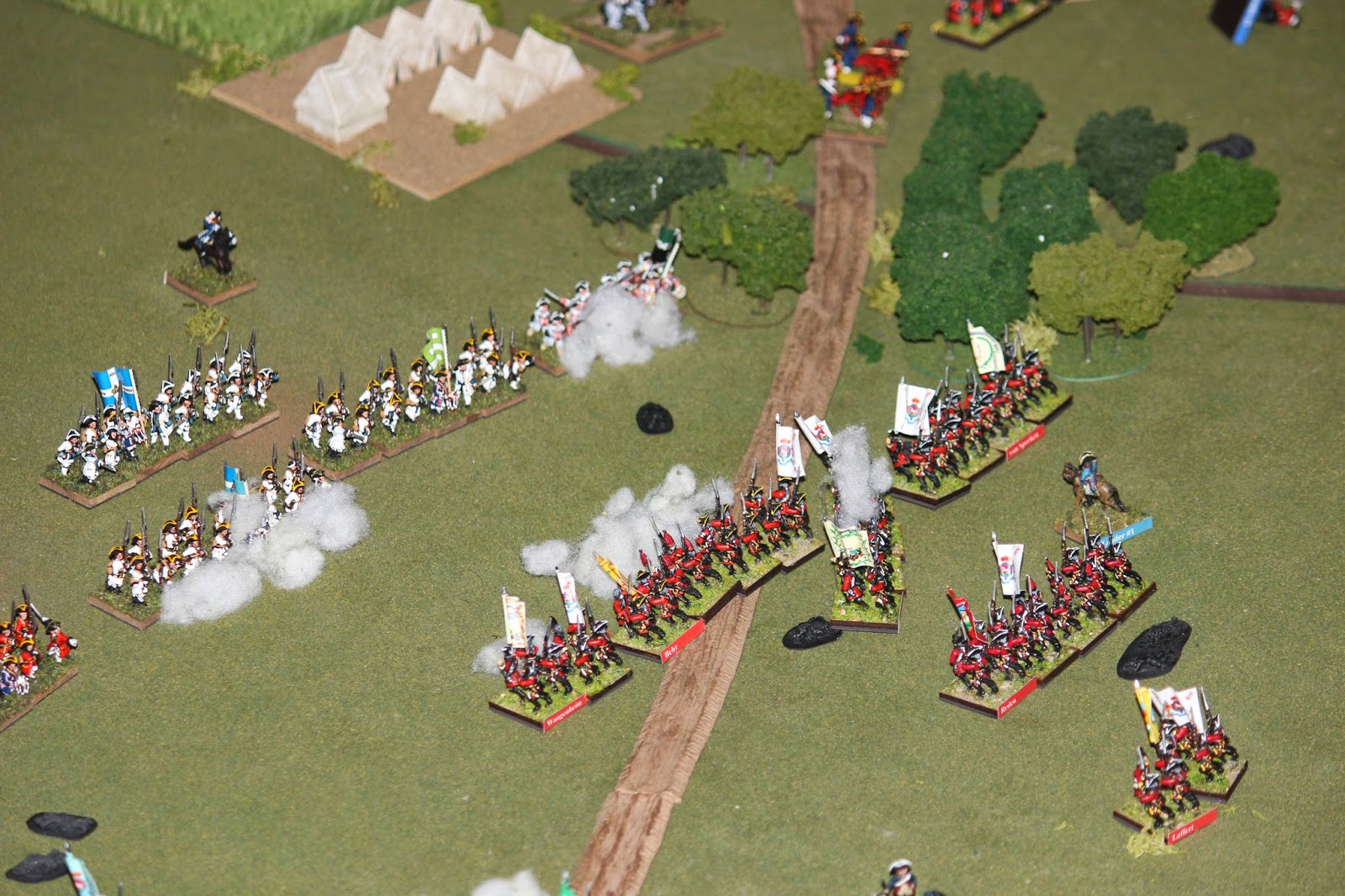 See you next week!

Great stuff. I'm looking forward to your next SYW report.

An excellent report, love the SYW!

Great looking and colorful game. I do love the scarlet Hanoverians too!

Glorious looking game, Eric! Any chance of you bringing a 7YW game to Historicon?

Thanks folks. Peter, I'm not sure what I'm going to bring to Historicon at this point. Just got a room with Victor, so at least that is taken care of.