Some of you may recall I ran this game at Historicon back in 2012 (I can't believe it has been six years!). I finally got this back on the table and hope to do so every year or every other year. This collection is just marvelous and I need to get it on the table more often.

Background and history of the battle:
https://en.wikipedia.org/wiki/Battle_of_Puebla

"It was a magnificent battle! Believe me there was a lot of warm work on the field that day! The French forces charged courageously up the hill against Fort Loreto and knocked out the Mexican heavy gun, but the defending infantry filled in the battlement and returned musket volley fire sending the attackers back. Zouves advanced against the trench line between the forts and the Mexican National Guard unit defending it fired several volleys without effect, but they also stalwartly took several volleys and continued to hold the trench line. The Mexican heavy guns in Fort Guadalupe caused casualties in the assaulting forces and the attack temporarily stalled. The French forces pushed over the garden wall and were going forward into the stoutly defended village. But on the Mexican right flank, an heroic march at double time brought forces to bear against the French left. A Mexican cavalry unit wheeled and charged into the flank of the French cavalry and decimated the entire unit. Volley fire from the Mexican Infantry line nearly wiped out the defending French infantry unit opening up the entire left flank of the French lines. The Mexican forces had seized the initiative and were poised to gain a long run of actions without answer from the French, and in the interest of discretion over valor, the French yielded the field to fight another day! Yes, it was a magnificent battle in commemoration of the historical events that occurred in 1862 on Cinco de Mayo! Classic Piquet game action at its finest!!"


Objectives – Take Fort Loreto (5VP), Fort Guadalupe (15VP), and or Xonaca suburbs (5 VP). In addition, each side gets one VP for each unit destroyed or routed when the game ends.

Mexican Army of the East 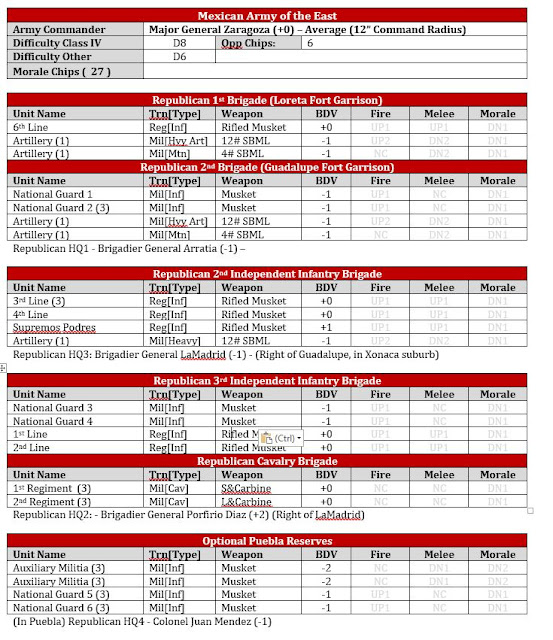 French Army
The French have the option to create a 3rd command out of any units they possess. In this battle the 1/2nd Artillery, 62nd Line, and 2nd d' Afriques (Cavalry) formed the 3rd command guarding the army's left flank. 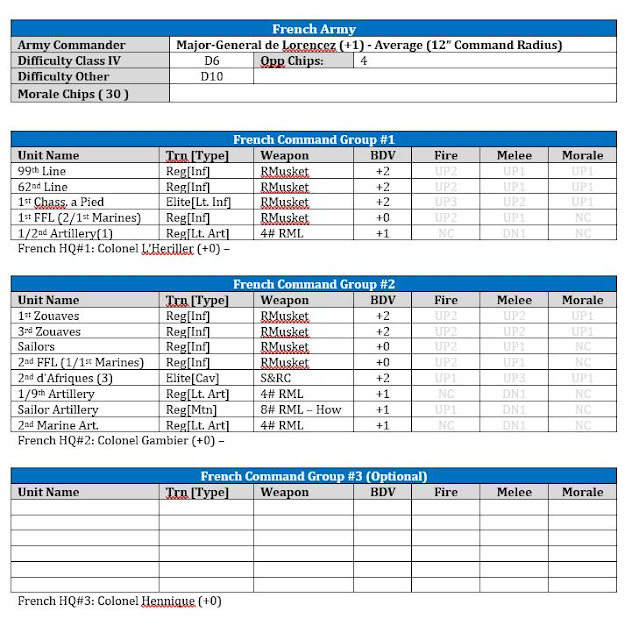 I started the assault force on Guadalope Hill fairly close because I wanted the game to come to a conclusion in the evening time allotted. Here we can see the four battalions of French moving up the hill. Fort Guadalope on the left (with the Church) and Fort Loreto on the right with the rounded turrets. The French assault force was 2 battalions of Zouaves, 1 battalion of sailors (Fuisl Marins) and 1 battalion of French Marines. (per the real battle) 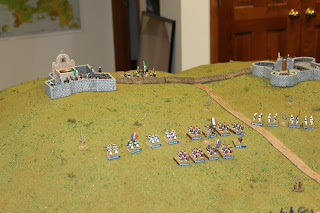 The suburb of Puebla called Xonaca is guarded by a 12# gun section and several battalions of Mexican regulars. 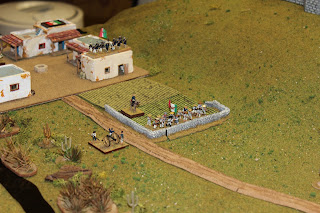 The Mexican view from Fort Guadalope. 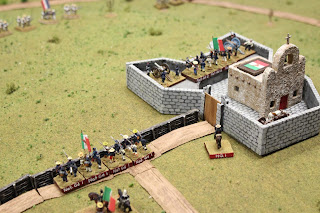 Looks like the 3 of the French battalions are heading away from Fort Loreto. 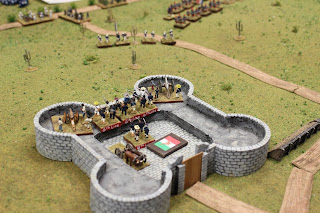 Guadalope hill is nearly 8 inches tall and is hard to really get a feel for the height via photos, however in person you get chills thinking of assaulting the forts on the hill. 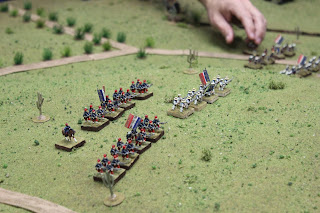 French Marines peal off to attack Fort Loreto and its 12# gun section. Can they get close enough to inflict damage on the gun section and assault the walls? 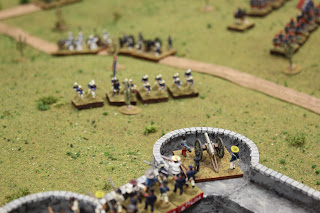 The Supremos Podres deliver a volley, but fail to stop the French advance on the ranchero before the suburbs of Xonaca. 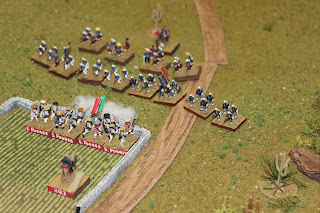 The French inch closer in Skirmish order to reduce casualties. They have such a small force that every casualty is critical. 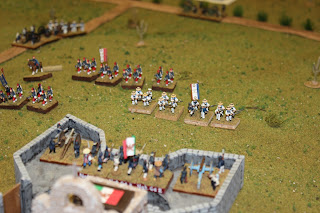 The Sailors take damage, and the Zouaves form into attack columns to charge the Mexican positions. 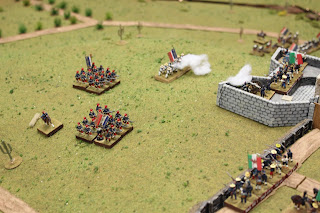 Different angle of the attack. 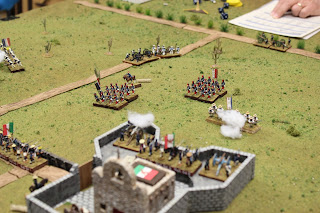 Meanwhile, the French Marines move in close and dual with the 12# Mexican guns..

The Podres take 50% casualties from the 18th Chasseurs a Pied and fall back in disorder. 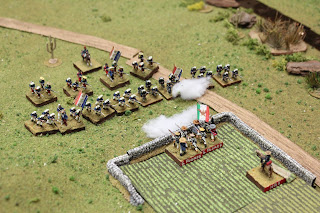 The Marines destroy the 12# guns section, however the 6th Mexican line unit is able to cover the gap before the Marine could storm the walls.

Nice shot of Fort Guadalope with Xonaca suburb in the valley below. 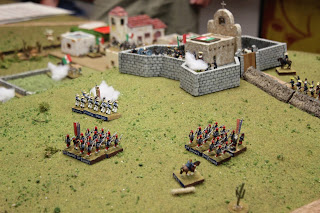 I love the character of Frei Korp figures, just look at the officer in sombrero! Frei Korp has an extensive line of figures for this period, and sold by QRF now. 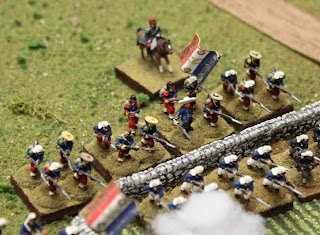 French Marines and Chasseurs cross the stone wall driving the Podres before them. 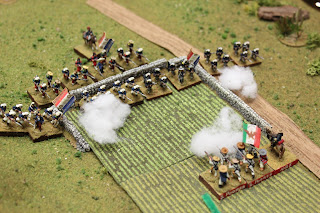 Zouaves advance towards the Mexican National Guard unit defending the trench line between the forts. 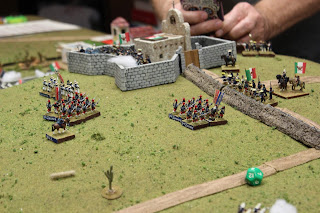 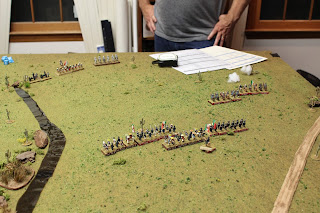 A good view of the French attack on the Xonaca suburbs. How about those long horn steer down by the river! 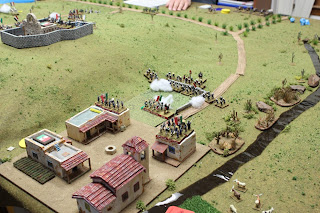 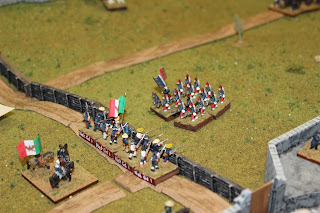 The French perspective of the situation in front of Fort Guadalupe, as the 1st Zouave takes a pounding from the 12# Mexican gun section in the fort! Two stands lost!

This is a pretty cool shot of the French attack on Xonaca and shows the height difference between them and Fort Guadalupe on the right.

The struggle in the valley, in front of Fort Guadalupe, and the Marines have to withdraw away from Fort Loreto as the musket fire was too heavy. 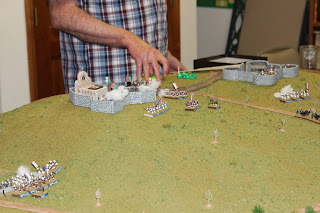 Now this photo really captures the height of Fort Guadalupe.

After the Zouaves and Mexican National Guard exchange fire several times, the Zouaves change to line to get a better shot, however will this formation change cause them trouble when they go in with cold steel?! 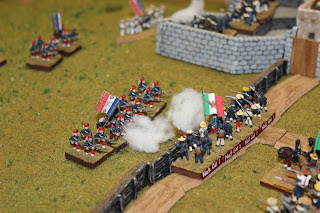 Things are heating up on the French left and not in a good way for the French! Outnumber 2 to 1 and now getting outflanked this could get ugly. The French 4# rifled guns chew through a National Guard unit, but the unit only wavers and doesn't rout. Then two Mexican regular units fire 62nd Ligne and wipe out 3 out of four stands! 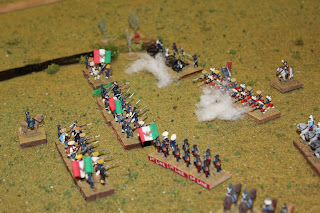 The Chasseurs are flank and roll a 1 in Melee! The Mexicans destroy the "Blue Butchers" before they can even gain that reputation in Mexico! 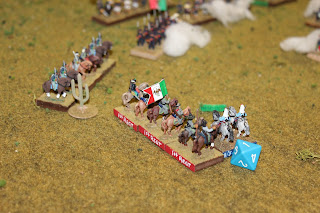 The Mexicans, sensing victory, charge the single remaining stand of the 62nd Ligne and are REPULSED! 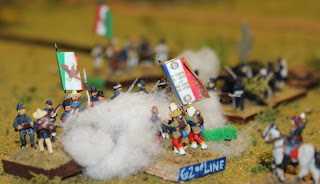 The next two photos are the high water mark in the center as both French wings are now crumbling. 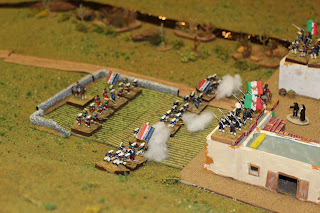 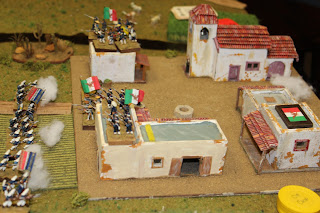 The Mexicans bring two more understrength infantry battalions to fill the earthworks between Loreto and Guadalupe. The Zouaves move in for the assault, but a massing impetus run by the Mexicans sealed their fate. The entire French left wing was turned by Diaz's force and the battle was conceded. 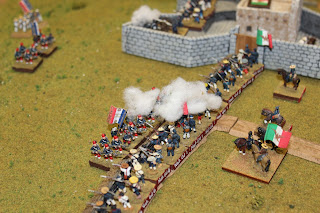 That sure was a TON of fun and we are going to refight the game again this week!