Gaming in March and April with another Spring E-CON

March and April saw the following games played here in the War Room (aka my basement).

A hearty schedule around my work and vacation schedule and some thoughtful playtesting. A total of 10 board games and 5 miniature games were played! We had another Spring E-Con (Eric Con) with a ton of games played.

EC and I thought enough of the No Retreat - Italian Front that we are going to do a playtest game with Phil joining us in late May, with the goal of playing the entire Italian WW2 campaign on a weekend or several weekends as time demands. I'm thrilled to play another front of WW2 besides West and East front!!

Table Battles, is a VERY unique concept and here is a great review here. This game can be played in 20 to 30 minutes, so we cranked out 2 to 4 games per session. I just heard that they are going to do another expansion for Alexander the Great! Woot! 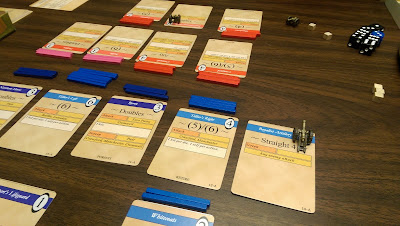 Burma - Lions in the Jungle is a playtest we have going on for Academy Games' Fog of War Series (Strike of the Eagle is the only one in print so far). Hammer and I went head-to-head twice with this wonderful system. Jan was our host and Umpire. We were able to play the first scenario twice and have provided feedback to the designer Brian Asklev. We have playtested several other of his designs: Korean 1950-15 and Russo-Japanese War, both Fog of War series. 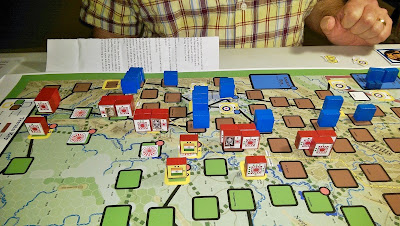 Brian broke out his 25mm ACW figures for the first time and tossed them into the Wilderness for a hot battle in the thickets and confines of that battlefield. We all had a great time with it, but we didn't quite finish (rough terrain makes for a difficult go). My Confederates were able to turn the flank of the damned Yankees, but before I could really cause unrecoverable damage the Yankees through another brigade into the mix. Hurrumph!  We used Piquet as usual. :-) 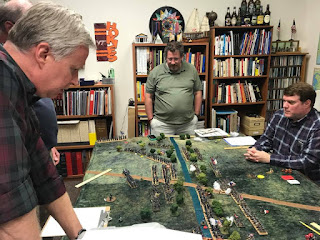 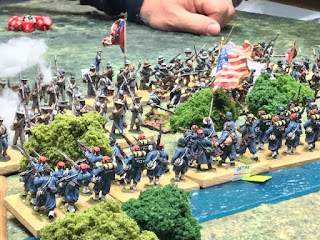 Below is my Rebels on the flank of the Union line! 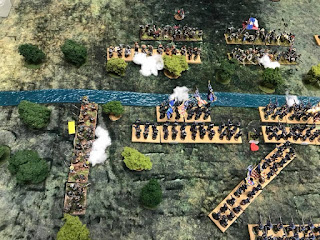 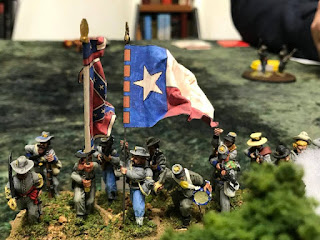 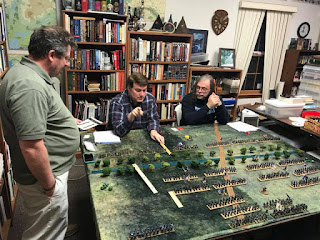 The Battle of Bergen (April 1759) will be talked about in another blog post.

This Spring 2018 E-Con was a fantastic weekend. We played loads of different miniature games and board games from all sorts of eras of warfare. Six games in 36 hours. I almost needed a vacation from gaming after that!

Friday night Mac started us off with a fun filled game of Musket & Tomahawks (F&IW) featuring his 25mm collection with the French and their Indian allies attempting to capture civilians and kill as many red coats as possible. What I really enjoyed about this game is Mac created individual victory conditions for each command it was a hoot to see how players went after their objectives!!

My mighty Hurons before the battle begins: 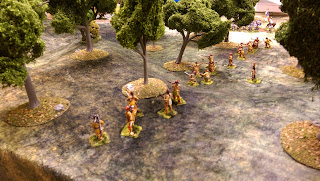 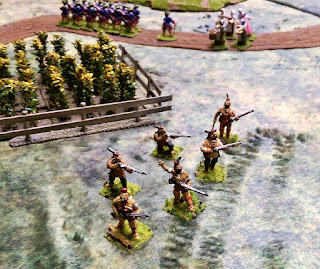 Another view. This is a Cigar Box plush table mat. 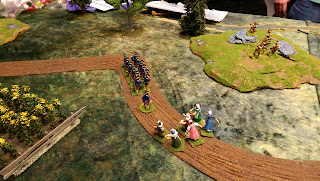 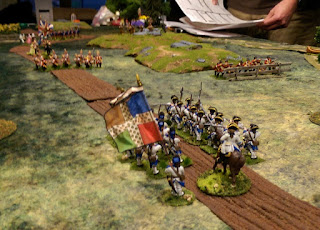 Here is an example of the really cool individual objectives that Mac designed! 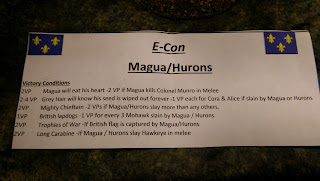 About 30 minutes in we decided to add some accompanying music! 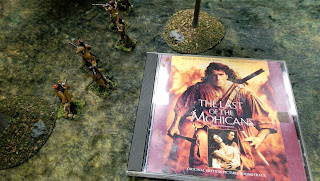 British Grenadiers and the General's daughters. Looks like Hawkeye and company have "rescued" them! They were eventually captured and killed. 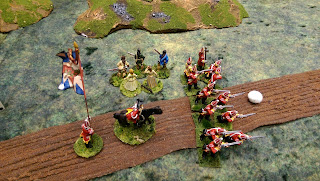 My Hurans, after sprinting across deadly ground, flank the Provincial light infantry! They took many scalps in that attack. 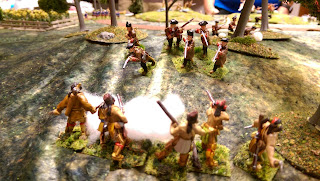 The next morning we fought two battles using Academy Games' 878 Vikings. Best of all we had the Giant map along with Wes' pimped out 25mm miniatures! What a treat. The English won both games. Here is a photo or two of the upgraded game components. 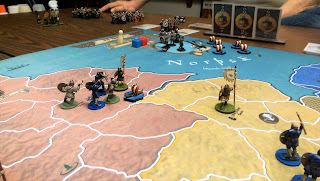 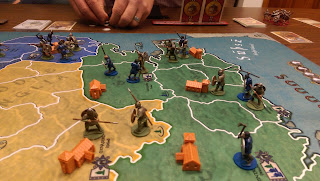 Next we broke out a four player game called Andean Abyss, which is a COIN game from GMT Games. The original COIN game! Quite frankly, this was my favorite one so far, where all the factions just made sense to me. We have played A Distant Plain, Liberty or Death, Cuba Libre, and Fire in the Lake in the COIN series also. The components, color scheme, and game play are outstanding. If you are going to play all four propaganda rounds, make sure you have 6+ hours of game time like we did. 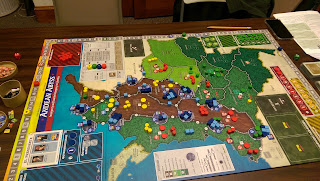 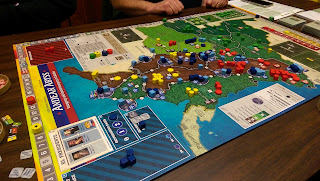 Sunday morning and afternoon, round out the weekend with games of Kemet and Raiders of the North Sea. My Mummy Giant from my small 25mm collection. 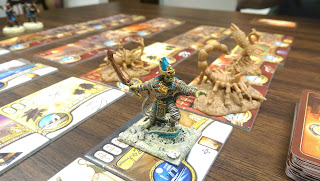 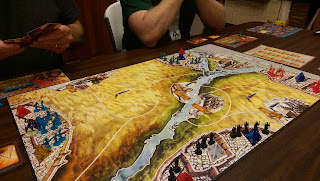 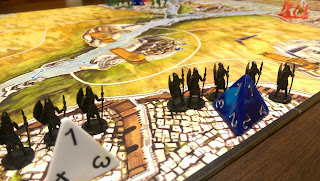 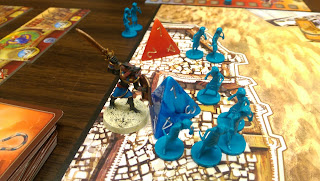 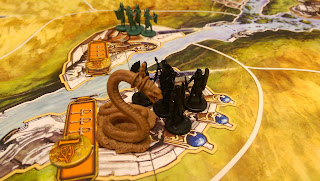 We had a wonderful time and can't wait for the next E-Con (make sure to stock up on caffeine!)

ERIC- Great to see you and your friends getting into a lot of Battles either using figures or counter board games and enjoying each different battle enthusiastically. Any chance of an up and coming 15mm Fantasy Battle this year? Cheers. KEV.

Wow, that's a lot of games played in a short time. Did you guys sleep at all? :-)

Hi Peter, I'll sleep some other time. :-) KEV, 15mm Fantasy using Peter's Hostile Realms is on the docket, in the near future!