We are still doing lots of gaming here in Charlotte, and I wanted to post a couple recaps of Taiping Rebellion games we have been fighting.

This one is a Taiping attack on an isolated Imperial force with the EVA (under Frederick Townsend Ward) coming to the rescue. Or at least trying to come to the rescue.

This is the only 28mm army collection I have and it is rather large at this point in time. I will have to sell this in the next five years as I will be downsizing my home and won't have a place to store this wonderful collection.

We used Piquet, as usual, with some house-rules for flavor for this period.

My Taiping army is adorn with beautiful flags from The Virtual Armchair General, unfortunately, they have not released the Imperial flags (hence, my Imperial army will have to have handmade flags done by me). I don't expect them to ever release the flags for the Qing\Imperial forces.

Here are some shots of the Taiping army with the flags and pennants flying!

Brethren and Bandits (clumped in the second rank) 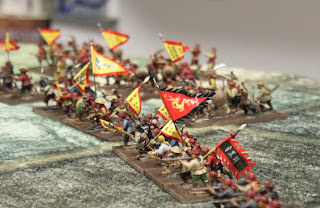 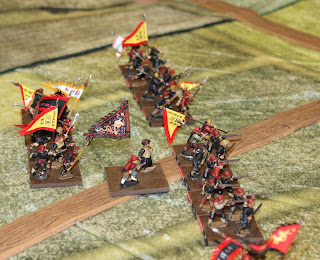 I commanded the cavalry reserve and the Left Ying 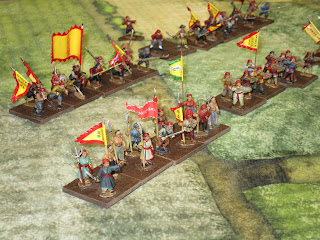 View from Jan's Imperial command (most are pictured), they are heavily outnumbered both in men and quality. 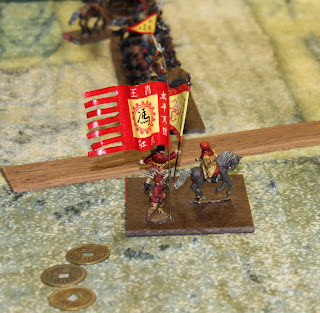 Good view of the Taiping attack against the Imperial positions in the hills.

This shot shows the far end of the table where my Brethren will have to take on the EVA. 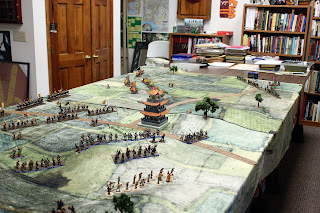 Frederick Townsend Ward (Brian) with his small brigade of Chinese and Manilamen. 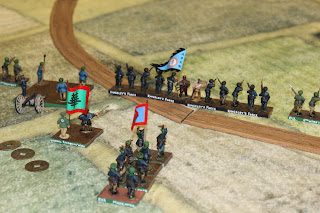 The attack commences with Phil's commands advancing on the Imperials.

My wing of brethren do the same against the EVA, but my only missile armed unit is immediately shattered by the EVA rifled breach loading artillery!! Three stands lost on the first shot! Damn! 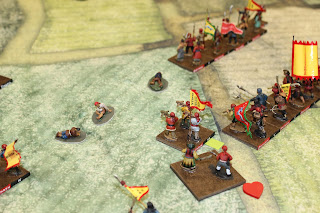 The light guns pro-long forward to see if they can get better range (I'm not sure they can do much more damage in one shot!)

More of the EVA including Kingsley's Force (blue), and Wards Rifles (left). 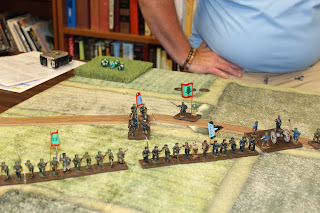 The right flank brethren are heading up the hill towards the Imperial forces. 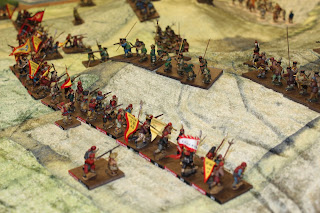 Taiping Veterans advance in the middle driving back the Imperial Tigermen and Jingals. 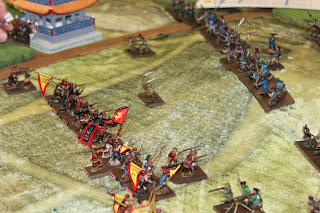 Ground eye view before the Brethren assault the hill. 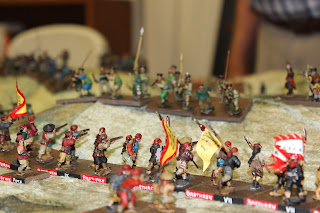 Imperial archers knock out a stand of rebels but don't halt their charge. 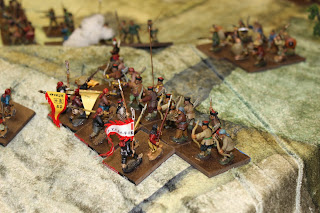 The brethren unit in the left throws stink pots and drives the Imperials from their positions. 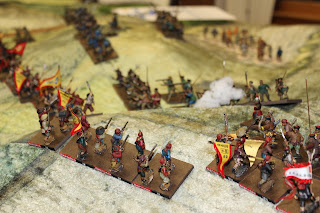 Veterans torch the temple of the unbelievers, while the move to the attack. 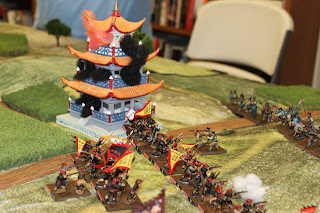 The scene before the armies collide. 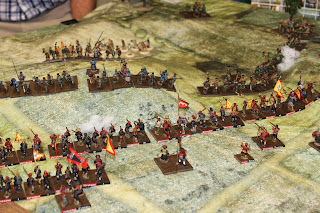 Meanwhile, on the left, I take my brethrens into battle with the EVA as I cannot just sit and wait while my units get shot to pieces. 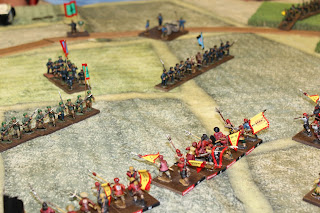 I send the women brethrens as far right as I can so as to draw off one of the EVA units to allow a gap to appear in the EVA lines. My ladies have a stink pot attached. :-) 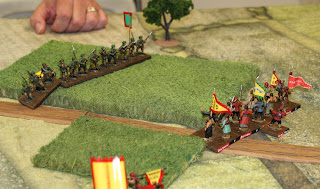 The rebels now charge and rout nearly all that is before them. They rout the archers, the previous Imperial unit that the stink pots disordered and forced back, leaving a band of peasants in support. 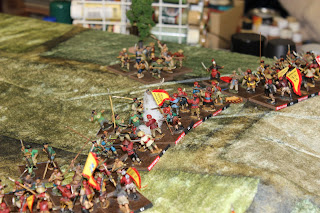 Imperial commander, with casualty check heart next to him, watches as his forces melt before the Taiping rage. 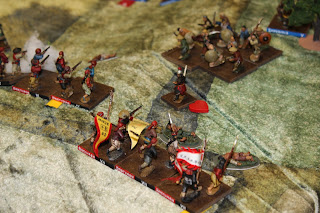 View from the Imperial side as another melee commences. 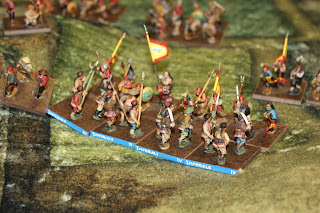 Imperials discharge their bows, matchlocks and stink pots against the Taiping Veterans 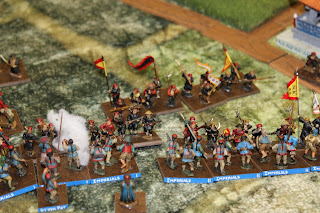 Here you can see the shattered remains of the Imperial left flank. 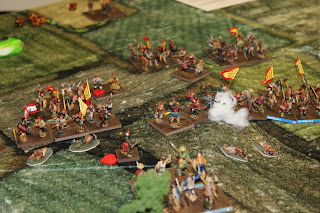 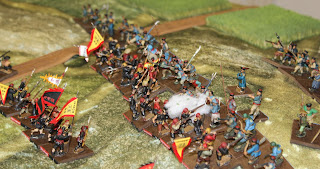 The SHAME, a veteran unit is routed by the fire. 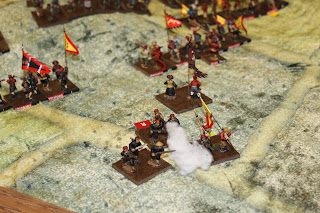 The Imperials doggedly try to gain an advantage and fire on the flank of the Veteran Taipingers. Only to cause no damage, then get routed by Jingal fire from the rebels. 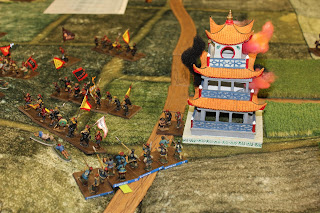 One the left my hordes advance, but all EVA musket fire is weak, but the artillery knocks out some of the lady's battalions stands. The ladies shrug off the casualties and move forward towards the 1st EVA Regiment (top right of this photo). The Taiping Jingal (center right) fires at the 1st EVA and disorders them. 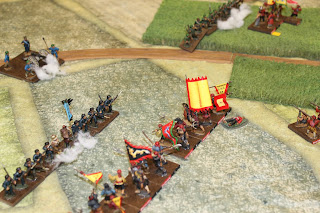 The Taiping Women's battalion charges into contact, then unleashes their stink pots, which ROUT the EVA regiment! 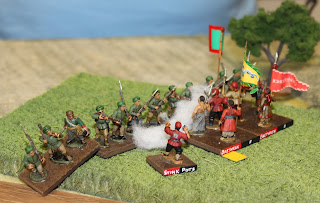 Things just get worse for the Imperials as more regiments rout before the Taiping. 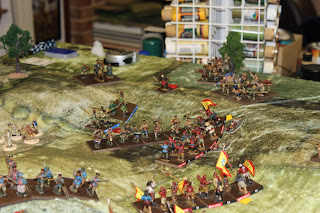 Another unit routs for the Imperiasl before the Taiping as they overrun the local commander and his bodyguard. The Imperial forces flea the field while the EVA withdraws before it can suffer any critical damage. 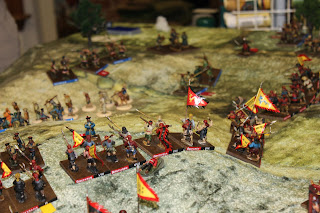 We will fight another battle next week with the Imperial forces holding a River Fort against the Taiping army. Link to the next battle - River Fort Assault at Hankou.

Wonderful units and banners on this table, looks superb!

Very beautifull armies, the flags and the banners are splendid.
Thanks

Thanks for the kind comments, they are much appreciated.

Thanks Peter! We are having a ton of fun with this collection right now. The battle last night, Assault on the River Fort, was spectacular too.

As for selling these unique figures when you downsize your home; well, I'd say that's a matter of buying the right property to accommodate the collection! :-)

I don't plan to retire until age 70, and if we move then, there had better be room for all of my troops to move with me!

I know you are right Peter, but these 25mm figures are the outliers for my collection. They are my only 25mm figures, so they will have to take flight.

Did you ever sell it?

Are you wanting to?

Hi Mark, I have not sold them and I think I need to keep them. I just love them too much to part with at this point in my life.