One of the biggest challenges was taking the enormous amount of stats and special rules for Epic and convert them over to Field of Battle: Sci-Fi.

The first thing was converting movement. Here is how I adjusted the Epic stats to fit into FOB. Remember I'm only converting Space Marines, Imperial Guard, Eldar, and Tyranids for my gaming pleasure. Those with Squats, Orks, and Chaos Marines can use my guidelines below. 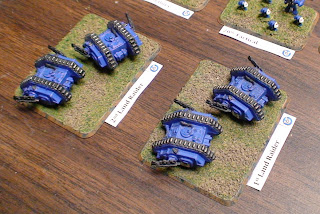 This is not an exact science and I allowed some leaway in adjusting movement. The best part about writing rules for only your group to play with is that you don't have to account for every detail. It is quite liberating!

Converting Weapon Ranges
FoB has one weapon range for all units, well that wasn't going to work for all the nasty stuff in Epic, so I changed the following.

In addition, to keep things simple, I used the following range calibrations to adjust fire quality:
(click for larger image)

Lastly each vehicle weapon was assigned a Weapon Level (WL). This tells you which row on the rating table to roll on when creating the Combat value of the unit.

Converting Armor
First, there was the issue with infantry in armor, like space marines. I gave them a special value of Heavy Body Armor, which is a bonus against other infantry fire, but not against artillery and large caliber weapons.

Next was dealing with vehicle armor:
Armor Save = FOB Armor type

I dropped Extra Light armor as it really wasn't something fits into the game as I envision it. That may change.
Ultramarine Infantry companies (each stand is a company) & Rhino APCs 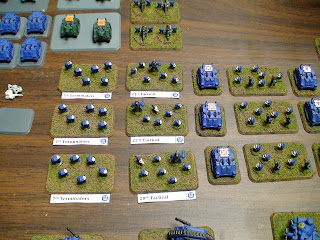 Next, some special changes to match up with how FOB handles better quality units:

SCA = Superior Close Assault (3+), More than 6 I have to figure out something better

Note that I haven't actually played with these conversions, so I may have to make tons of adjustments, but I feel pretty confident with what I have done so far. Tyranids will be a challenge, along with Titans, but I will figure them out. 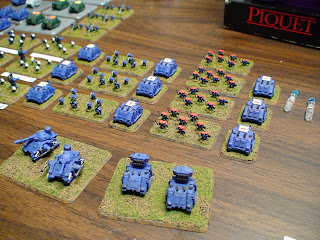 I look forward to an AAR showing the litle guys in action.

This is interesting. I don't have any GW epic stuff but maybe some of your ideas will be useful for other ranges like Blue moon 15mms.

Ron, originally I was going to try this with 15mm Sci-Fi, but I didn't have any painted! Then I realized I had a ton of Epic stuff sitting around that I could use.

I'm looking to do 15mm at a level where each unit is a squad or fire team, while Epic I will use for company level.

That sounds good! It will be interesting to see how you develop these ideas.

This is an interesting read, thanks for sharing. I have a lot of Epic stuff that I'm interested in gaming with.

Are your base sizes defined by the FoB ruleset or did you just like the size?