In my continuing attempt to playtest new FOBWW2v2 and my conversion of Epic 40k to FoB, we played another game Wednesday night.

Some things we tried out last night based on conversations here on the list.
1. No drift for off-board indirect fire. (Worked perfectly)
2. We used Asset desks for calling in assets. (FANTASTIC!)
3. No templates (just a D4 distance from the unit targeted), and this too worked great!
4. Defenders in town areas may choose to retreat suppressed if they want rather than hold their town section suppressed. This also worked great.
5. Close Assault in town that would not have ended, because the defender never has to leave, ends in exhaustion if the defender is pushed back 3 or more inches. Attackers then move into the town section with the defender. (Worked great!)
6. Off-Board counterbattery! This mechanic worked great. An artillery asset (Medium, or Heavy) can fire counter-battery. Roll the CC die of the asset vs a D8. If you win, you reduce the enemy’s asset points by 1.


Game Objective: Eldar to take the Space Marine Administration Center (large building with golden roof) The Administration Center was protected by an Ion Cannon. Our first attempt to add in units with shields to the game. The Ion Cannon had a 12+1 combat die, and D10 defensive die.
Eric played the Ultramarines, while Brian and Mike attacked with the Eldar. The game was very large in that there were 35 Eldar units, and 22 Ultramarine units on the table.
Space Marine Tactical Battalion (Mechanized) deployed in small city near the river on the Ultramarine's right flank 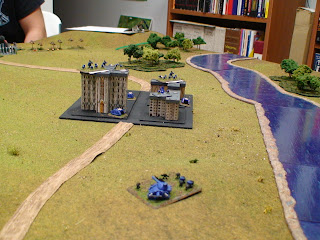 On the Ultramarine left flank armored companies remain in reserve, while Devastators defend the city, next to the Administration Center. 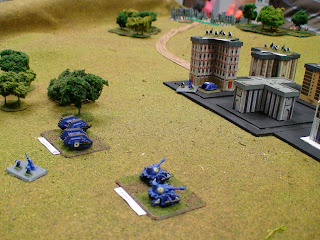 A battalion of Ultramarine Terminators are hunkered down in the Administration Center. 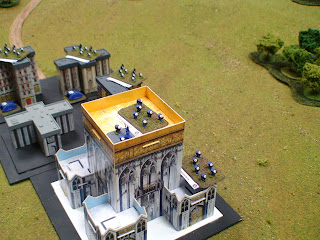 Shields up! Ion Cannon in rotating turret has two plasma shields up! Eldar Falcon Grav tanks loaded with Guardians in the distance. 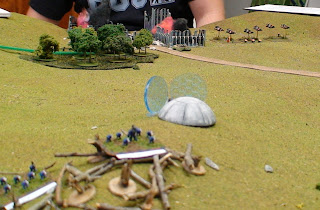 In reserve, the Space Marines have a 3 company Assault Battalion. 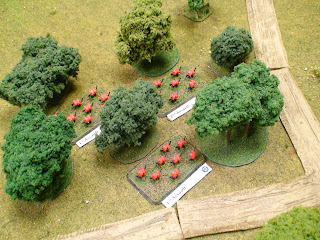 The warhost of Eldar Exarchs saw some of the bloodiest fighting of the day. 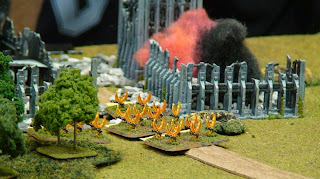 Because the Ion Cannon dominated the terrain of the battlefield the Eldar were determined to destroy it. One of their first cards was the Command & Control card, which allowed them to call in off-board assets. Their first asset was a PLASMA MISSILE (D12+1 combat die)! Just my luck!
So, the Eldar targeted the Ion Cannon with a Plasma Missile. Litko plasma shield disks. 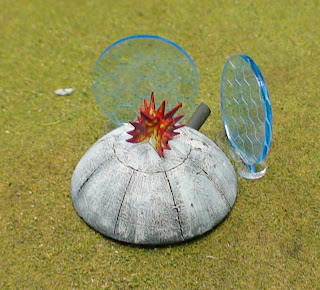 The plasma missile tears into the Ion Cannon knocking out both shields and inflicting one hit on the structure! So much for my lovely Ion Cannon! 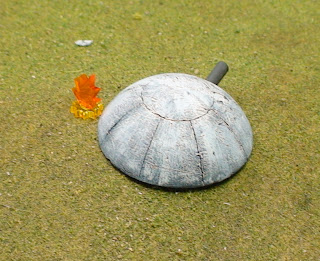 View from Mike's position, looking at the Ion Cannon in the middle of the battlefield. 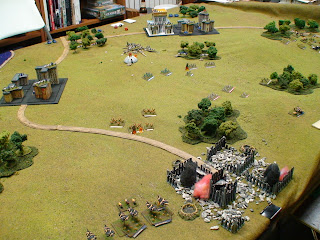 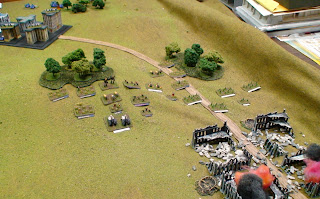 Mike sends in his Swooping Hawks into the teeth of death! 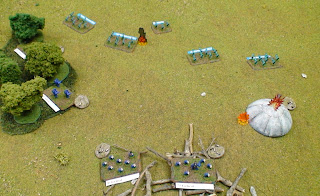 The Swooping Hawks are smashed and pushed back with heavy loses! 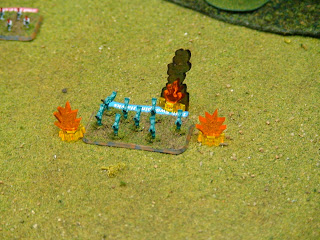 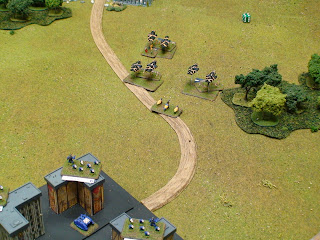 The Eldar Exachs launch their first assault on the Ion Cannon 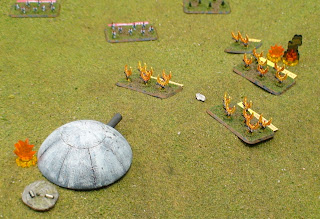 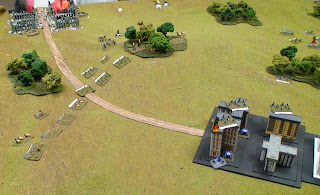 Great shot of the dual between Ultramarine Devastators and Eldar Dreadnoughts and Bright lances. 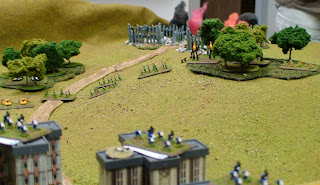 Devastators start to take some loses, but manage to drive off both the Bright Lance company and Dreadnoughts. 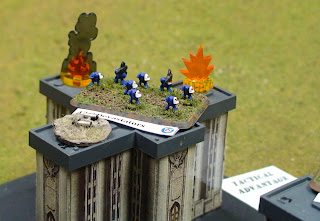 Mike's Exachs launch another assault on the Ion Cannon, but the going is tough as the Ion cannon shatters the elite Eldar warriors. 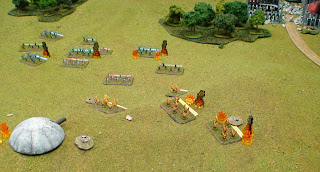 Exarchs are pushed back with heavy loses, and even lose one company. 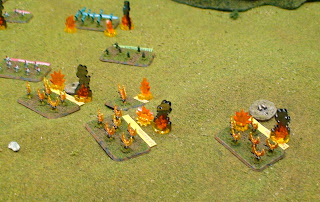 Eldar assault the Ultramarine right flank. Guardians disgorge from their grav tanks and begin to hammery the marines. 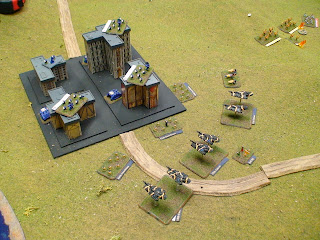 Exarchs rally and push in again. You can see a second hit marker on the Ion Cannon now. 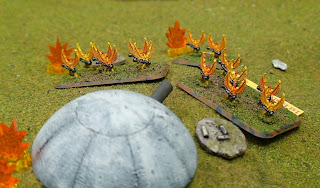 Brian's Eldar launch their assault led by the Striking Scorpions on the Ultramarine's left hand city! My Ultramarines commit their armor to try and breakup the attack. 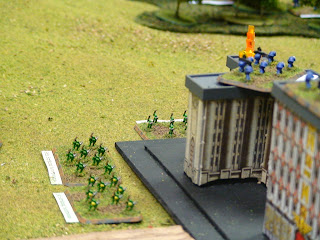 Here you can see how badly the Eldar were chewed up. Brian lost nearly every unit attacking my city from Land Raider and Devastator fire. He figured he would lose some, but not everything! 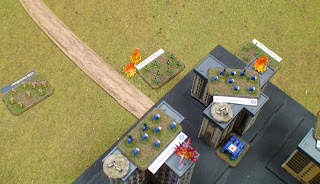 Exachs exact revenge and finally destroy the Ion Cannon, but the cost was tremendous. 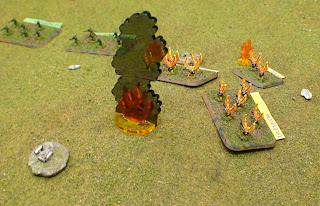 My Tactical Marines on the right flank can't stop the Eldar attack and are slowly being pushed back in the city! 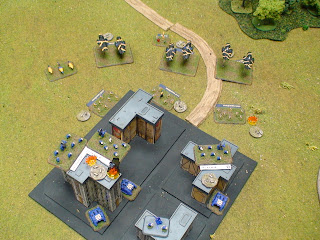 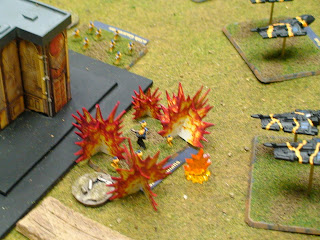 Space Marines had hot dice and almost annihilated Brian's entire attack. (I rolled great, Brian rolled 1s) Eldar lost 26 of their 35 Morale Points after one turn, while the Marines only lost 7 of 22 morale points. The Eldar players conceded this battle.

The Eldar are going to regroup (bring new troops in and rotate some exhausted troops out) and attack again next week. We are learning a lot about tactics and strategies around off-board support, movement, and general game mechanics. We are still new to FoB so each game is a learning experience.
Posted by Eric Burgess at 9:58 PM

How long did the game last? It looked great!