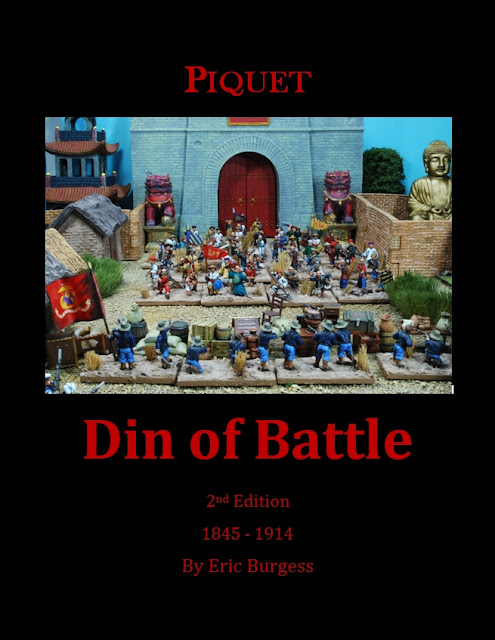 I'm proud to announce that Din of Battle 2nd edition is making its way to the printers as I write this. It was a long and fruitful journey for me to write and playtest the rules. I started writing DoB2 back in 2007 and have run the Plains War Campaign and the Boxer Rebellion campaing using the rules. I've also fought several additional battles using French Foreign Legion.

I truly believe you will enjoy the rules if you are a Piquet grognard or new to Piquet.


2. 4 Quick Reference Sheets (2 for Battalion\Company scale, and two for squad)

3. The game rule section is only 37 of those pages.

5. Squad special rules are only 3 pages.

7. Nearly all cards have their definitions directly included in the DoB2 rules so you don't have to switch back and forth between the Master Rules and DoB2.

8. There 13 jammed packed campaign musters with Quick Unit Rating Tables to make setting up the game quicker. This is 44 pages of GOODNESS!

9. All sequence decks for a Campaign Muster are located on the same page so you can quickly create your Sequence Decks.

10. Those familiar with my Campaign Muster style (Archon 2) will see I've done many of the same things; like include a list of all major battles in the war, recommended scale to fight in, suggested TAD decks, and muster special rules just to spice things up!

11. Army Characterization Table has been updated.

12. Stratagems have been updated to be more period specific! Natives have a Stratagem table and so do the Imperialists. New stratagems include: Mass Assault, Deadeye, Last Stand, Fanatic Push, Advance Unnoticed, Careless Ammo Storage, Desertion and many others!


Din of Battle Back Cover: 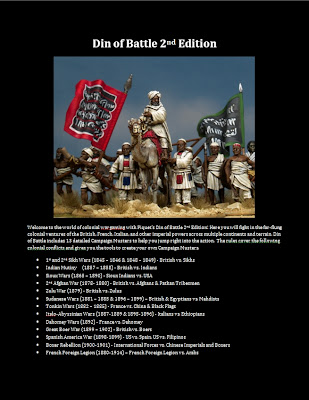 Can't wait to see this "in the flesh"!
Eric
Posted by Eric Burgess at 8:21 AM

Congrats mate hope it goes well for you, sounds like its been a long road.

I have listed listed you for the viral "Stylish Blogger Award", details here:

Looking forward to Din of Battle 2 as well!

Thanks for the nomiation Donogh! My blog is pretty diverse. :-)

DoB2 is getting closer and closer to release!