Long ago I collected Adler 6mm Napoleonics. I thought they looked great in mass and loved 24 figures per unit. The only problem was everybody else collected Napoleonics in different scales so I sold my Adlers and  have been pursuing more unique armies for me collection.

Then came Commands & Colors Napoleonics by GMT Games (Richard Borg).  Not only is this a fantastic game on it's own, I'm going to use the blocks as "miniature" units to refight Napoleonic battles with Piquet's Les Grognards or Field of Battle 2nd edition. (I'm doing the opposite of many C&C gamers who like to use miniatures instead of blocks to fight the C & C game)

C&C Napoleonics has stickers on the blocks which make them about 10mm in scale which is perfect for what I have in mind for them.

Here is a picture of my Spanish Army (2 sets of the Spanish supplement). This gives me an enormous Spanish Army to fight with: 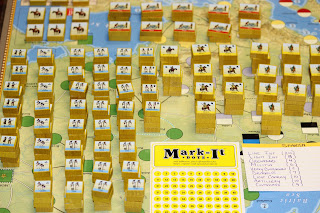 I plan on using the 1/4 inch diameter round markers I found at the local "Map Shop" to put a number on one of the blocks in the unit. Players can easily identify the unit based on the number and will correspond to a unit on the roster with a more official name like: "2nd Majorca"

This way I can I can fight Napoleonic battles without spending a fortune on figures and painting. Plus, I get to play the amazing C&C Napoleonics game to boot! They have Austrian, Prussian, and Russian supplements coming out in 2012! Can't wait!

Here are some units in their respective formations of Line, Attack Column, Square, etc:

More about terrain for this little project later. I have two sets of blocks from the main game, which gives me all the British, French and Portuguese I could ever need.

Pros: no painting figures, easy to transport, lots of units, ready made scenarios from the game!
Cons: terrain has to be more 2 dimensional rather thatn 3 dementional due to the blocks having a small footprint which may cause them to tip over more coarse terrain.

I remember someone discussing this in Wargames Illustrated many many years ago, except he didn't have the benefit of the nice adhesive stickers and had to hand paint his blocks in uniform colours with the facing colur as a band around the top.

The Spanish certainly look impressive en-mass. So really good board wargames out there (as I know to my financial cost !)