I'm doing a series of  insights into some of the rules and mechanics of my upcoming ruleset: Vauban's Wars!

This time we are talking about TRENCH RAIDS!

These were minor sorties launched by the garrison to disrupt or damage the besieger's sappers, artillery, or siege works. They would be a company or two in size. The information below will give you a general idea of how it works, but the details are in the rules. 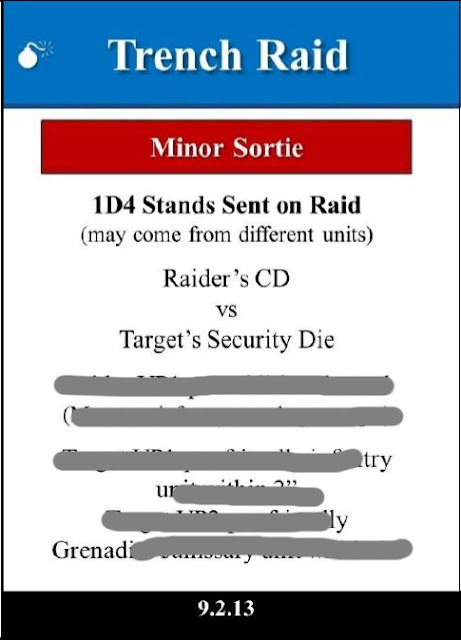 Trench raids are vital as part of an aggressive defense and can delay the success of a siege by a week or two if done right. This could be the difference in a siege outcome.

When the garrison player turns a Trench Raid card, they can send 1 to 4 stands of infantry, plus sappers if they are going to attack empty siege works, against the besieger's sappers or artillery.

The garrison designates the best combat unit as their base Combat Die, and that is modified for an additional stand sent into the raid.

The besieger uses their Security Die as their base Combat Die, which in turn is modified by local infantry units that are close enough to the target of the raid to defend against it.

As mentioned before here are the possible targets:

If they roll high enough against empty siege works they will make them unusable. This forces the besieger to rebuild the siege works to use them. This can be extremely frustrating to the siege timetable.

On the other hand, if the Trench Raiders roll too low they will be sent packing back to their parent units with UI loses. Below we can see the Austrians doing a trench raid with two targets. One target is two infantry vs. sappers, while the other is one infantry vs. sappers. Raid #1 is by one line infantry unit, while Raid #2 is led by Grenadiers and one line infantry in support. In both cases, the sappers have friendly support which will increase their Combat Die value. 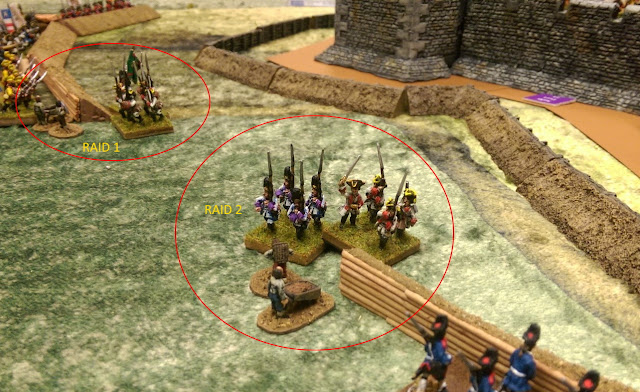 Yes, this is a risky event for the garrison, but the positives outweigh the negatives most of the time.

Hint, Garrison player should use Grenadiers or Elite Light infantry as the lead combat unit in Trench Raids.

Nicely illustrated. I like the short & sweet approach in explaining parts of the rules. Awaiting the publishing of these.

Joe, the rules are now available for pre-order. Links are here: