My fascination with early 20th century warfare continues with the Russo-Japanese War (1904-1905) land warfare. I have nearly assembled everything I need for this collection and I'm going to start posting my Japanese Army divisions and first up is the 2nd Division of the First Army!

The 2nd Division is the first division I've completely painted and is ready to take the field for my games. Most of the figures were already painted when I bought them, but I had to rebase, flock and do some touch-up painting on them to prepare them for battle. (much more work than I thought)

The 2nd Division was part of the Japanese 1st Army and fought in the following engagements during the war: Yalu River, Motien Pass (Motienling), Liaoyang, Shaho, and Mukden. The division fought in all major engagements outside the Port Arthur siege\assault.

I will be able to use the 2nd Division as a proxy division for other divisions if needed. I will field units for the 3rd and 15th brigades, along with the attached assets, plus Telegraph and Medical detachment.

Not to stray too far off, but my blog has just now crossed over 400,000 hits, which I think is pretty cool for a blog about wargaming. Thanks to everybody that has dropped by over the years!

"If I were asked to name the chief characteristic of the Japanese Infantry, I should say that it was its tenacity."
-- Major Joseph E. Kuhn, US Military Observer attached to the Japanese 2nd and 3rd Army 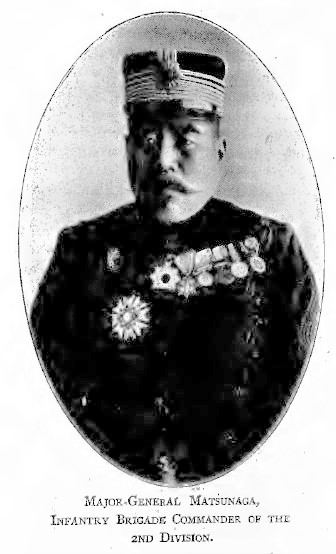 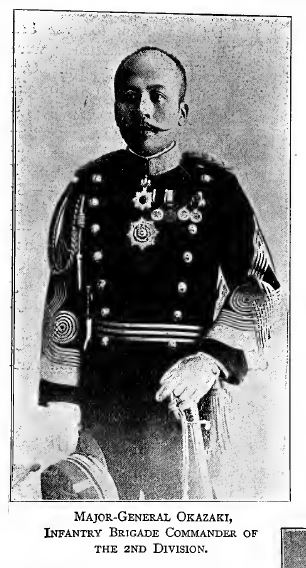 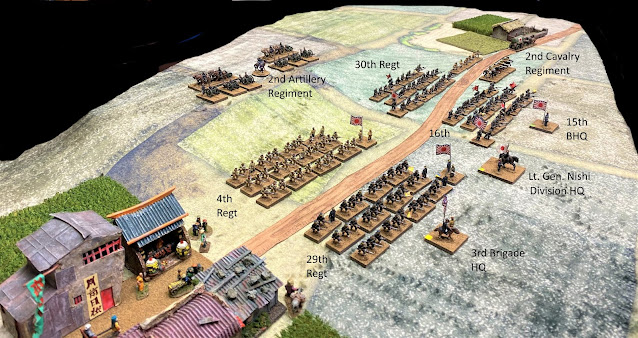 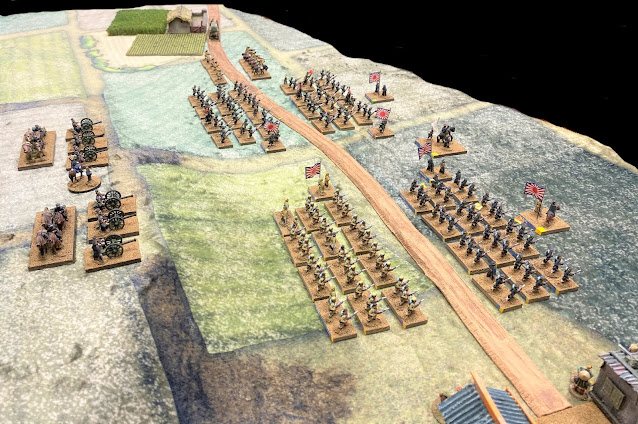 
Originally, I was going to field the Engineer\Pioneer Battalion, but later read that they never really fought as a battalion, so I'm going to use them to fill out the 12th Division's forces.

Using BARRAGE basing, each infantry battalion is 12 figures on 4 bases. Standard basing is 3 figures on a 1.5 x .75 inch base. Each regiment would have 38 figures, which includes three 12 figure battalions figures and a two figure Regimental command stand. 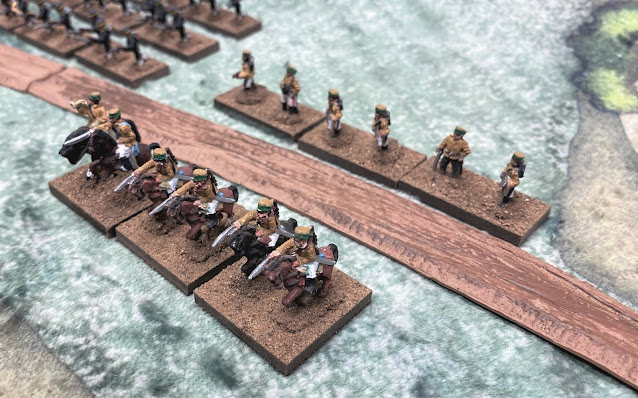 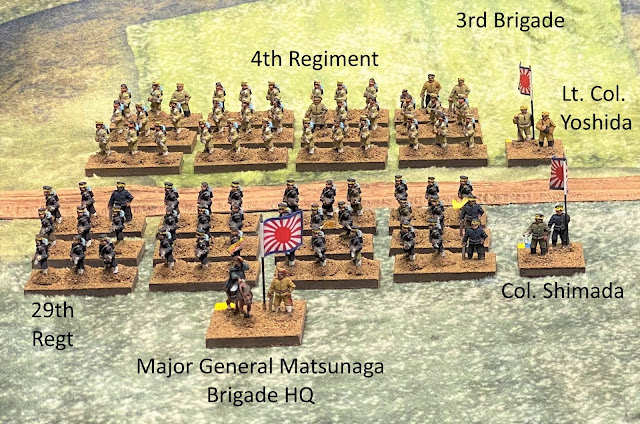 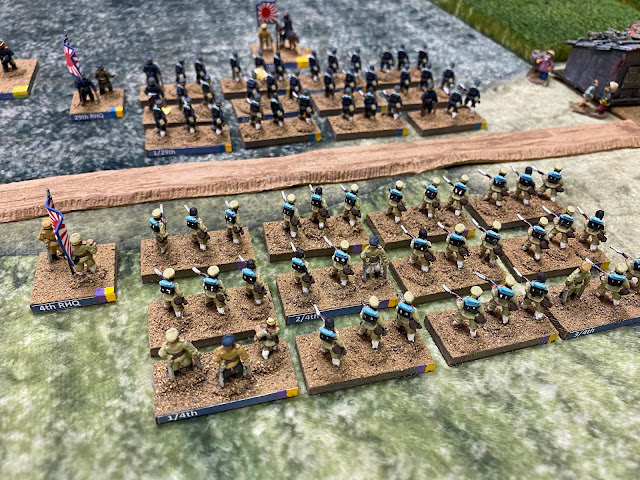 Each regiment has a unique color label.

Frontier miniatures for the infantry regiments 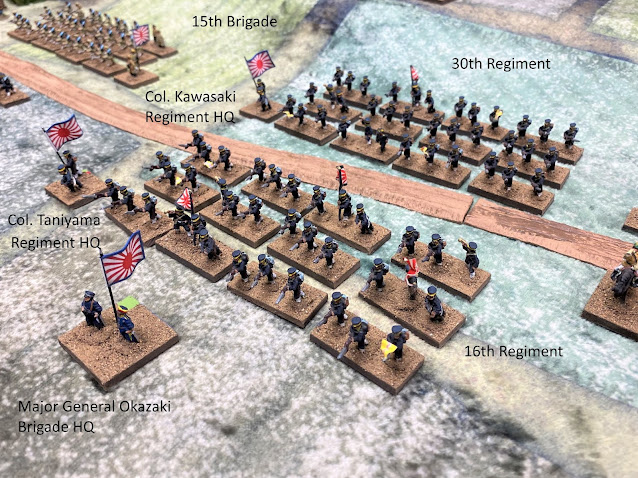 MARCHING SONG OF THE 9TH REGIMENT
Part of the 4th Division, 2nd Army

(This Regiment is mainly composed of men from the province of Omi, and the shores of Lake Biwa. The original was composed by Lieut. Umemoto, the " poet-lieutenant.") NOTE: almost sounds like an Iron Maiden song!

The bugle sounds, the war begins,
The war that's to punish the Russians' sins

Our Emperor calls us and bids us fight,
In his behalf for Justice and Right.
So forward march my comrades brave,
Let us face the Russians nor fear the grave

Chorus.
We'll die if need be, but
we'll ne'er disgrace
The flag of our country,
the pride of our race :
Our colours shall lead in
the onslaught's van,
As becomes the pride of the
brave Omi clan. 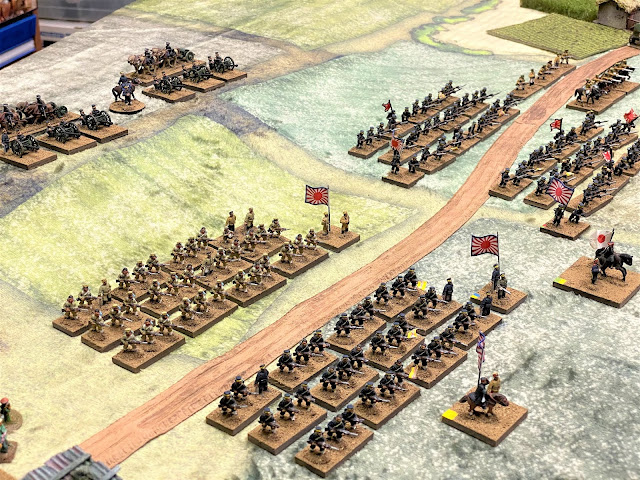 Great looking force Eric, and I love the basing!

Peter, at least it is not total khaki so you could push this lead around. ;-)

Indeed; I will just need to wear my white glove when handling them! :-)