Part 1 can be found here:
http://dinofbattle.blogspot.com/2011/04/epic-pk-battle-at-shilan-on-vornex-iv.html

The battle for Shilan continued to rage even after 4 hours of savage fighting.


Space Marine commanders began requesting fire missions from the Orbiting Weapons Platform, 20 miles above the planet. Will the assistance arrive in time?
The Right Hook

The Eldar won a series of impetus rolls which allowed them to flip really nice and useful cards, while my Marines stagger through their deck. (My first card was Command & Control and like an idiot I forgot to rally my troops!).
Anyway, the armored right flank of the Eldar (Exarches, Falcons, Swooping Hawks, and Guardians) were ready to pounce on my exposed left flank. The Falcons disgorged their Guardian companies and then went on the hunt!
Falcons move and deploy their forces turning the Ultramarine flank 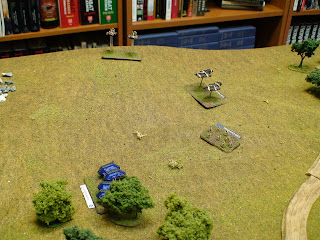 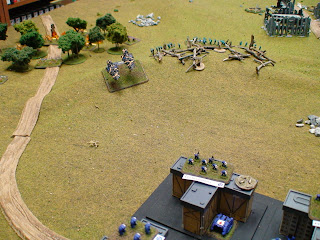 On the Space Marine's right flank the Eldar commit another Warhost of Guardians to take out the Ultramarines! 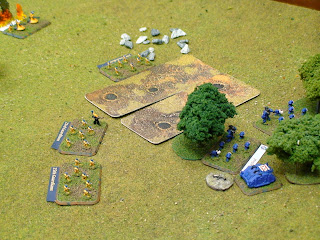 The Falcons with Guardian support attacked and drive back the  Land Raiders. 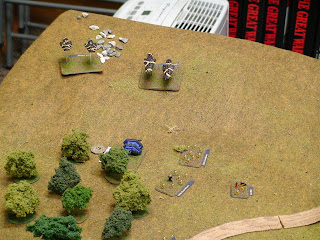 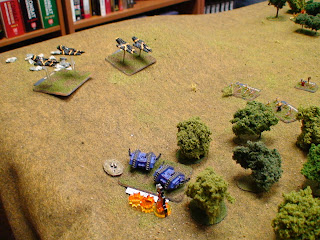 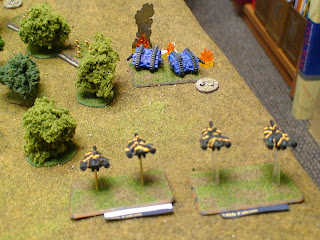 City Fight
Three companies of Swooping Hawks moved into assault the city section held by a company of Ultramarine Devastators. 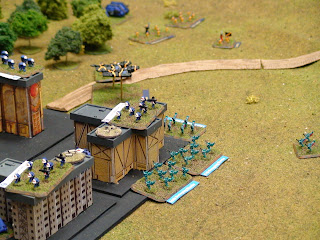 One Swooping Hawk company was smashed by the Storm Bolters of the 3rd Terminator company in an adjacent city section, leaving only 2 companies for the assault. 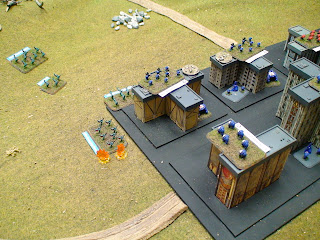 Three rounds of melee were fought and the Ultramarines were pushed back with heavy loses! 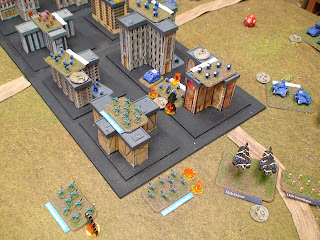 The 3rd Terminators launched a counter assault against the Swooping Hawks, but was quickly (and shamefully) repulsed by the Hawks! 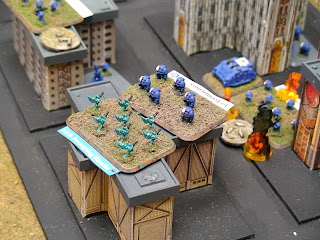 The Swooping Hawk assault was supported by Falcons and Guardians, which forced my Predator company to retreat, forced my Assault troops to flee to the protective cover of the city, and the 95th Whirlwinds had to relocate or be brewed up! (Not a shining moment in Ultramarine History). 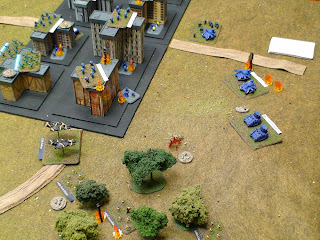 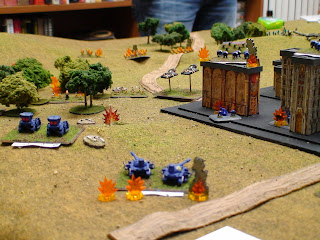 The Eldar Exarches really had trouble getting back into the fight. Their first battle in the woods versus the Assault Marines cost them about 5 UI, plus a couple suppressions. Their commander couldn't shake off the loses (rolled a 1 on rally twice, before finally getting some success late in turn two). The Exarches are the best soldiers the Eldar have, yet they couldn't rally enough to attack the city. 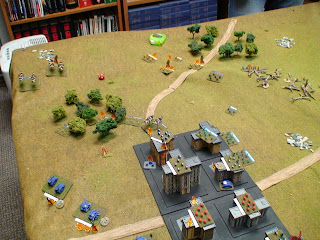 The Fight in the Center and Right Flank

As the fight for the city raged, the center and right flank of the Ultramarines so heavy fighting.

Guardian and Jetbikes attack the Ultramarine tactical company holding the center woods, driving them back 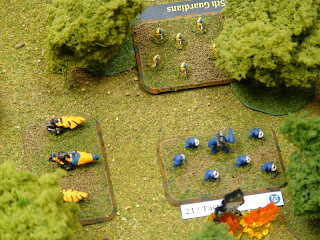 Mike sends in a company of Striking Scorpions to finish the Marines off! 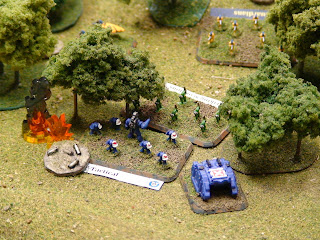 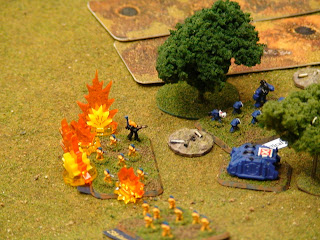 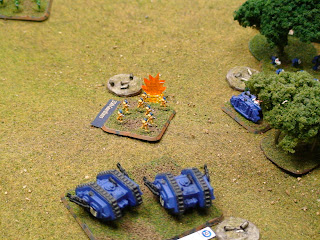 Then turns on the advancing Striking Scorpions 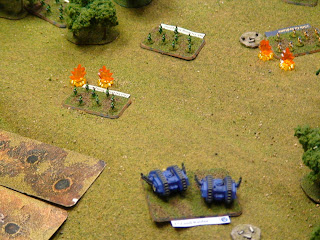 Vortex Missile Strike
The Vortex Missile came screeching through the sky and landed right on the Swooping Hawk's position in the city! Two companies of Swooping Hawks were sucked into the void! The Void remained on the table chewing up the city section. Since this vortex could either disappate, remain in place, or move my Marines were extremely nervous about the situation (Next time I'm not going to bring down a Vortex missile that close to my own objectives and troops). 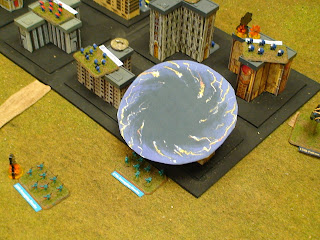 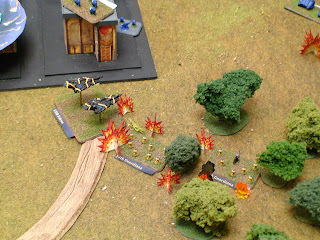 Conclusion
Field of Battle: WW2 does work with Sci-Fi miniatures with minor tweaking! I'm soooo glad to finally have my Epic 40K figures back on the gaming table with a ruleset I enjoy!

We all learned some valuable lessons in the playtest. The Eldar needed to push harder in some sections and reduce the action in others where they just needed to pin down some Ultramarines rather than run right into them. The Space Marines were ok, but I was so outnumbered I was thankful for every Eldar unit I could nibble out here and there to reduce their Morale Points to zero. When the fight got heavy (when I was outnumbered) it was hard for me to hold my position. Eldar needed to drop more off-board artillery on me to soften me up or at least make me freak out. The end of turn 2 had about 4 indirect barrages arrive for the Eldar, but it was too late.

We will likely play another battle next week, and I hope to have some Eldar Tempast Super Heavy Grav Tanks ready to rumble by then.
Posted by Eric Burgess at 10:42 AM