The Eldar warhosts launched attack after attack across Vornex IV overrunning most of the Imperial Guard and Space Marine defenders. General Tarnak of the Ultramarines setup a defensive perimeter around the city of Shilan. Several towns and cities to the south lay in ruins, but the Eldar would be coming from that direction. Can General Tarnak's reinforced combat brigade put a dent in the Eldar assault so that more Ultramarines can be redeploy to face this threat?

Battle Report featuring my Epic scale Space Marines and Eldar using modified Field of Battle by Brent Oman. This is part 1 of the report. Game to be completed next Wednesday.

Per previous blog posts with the OOB, the Eldar nearly have a 2 to 1 force ratio. Brian and Mike were the Eldar players while I was the Space Marine commander.
The Eldar have 4 turns to capture the city of Shilan. It is an 8 section city with large skyscrapers. 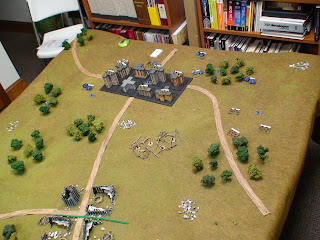 Mike took the "foot sloggers" of the Eldar army: 2 Guardian regiments (6 companies, plus recon, plus AT guns), Fire Dragon Regiment (2 companies), and Striking Scorpion Regiment (4 companies). He deployed this to the center and right flank of the Space Marines. 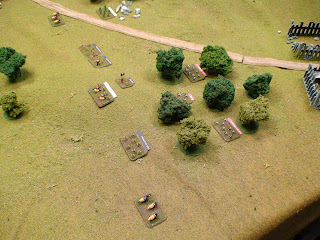 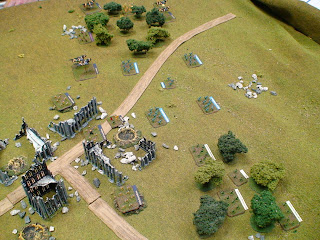 Brian deployed his Guardian regiment in Falcon Grav Tanks, along with the Exarches and Swooping Hawks on the Space Marine left flank.

Falcon Grav Tanks with Exarches backing them up. 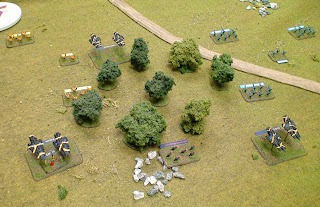 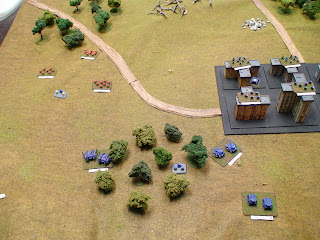 City of Shilan, with Ultramarine Terminators and Devastators waiting for the Eldar 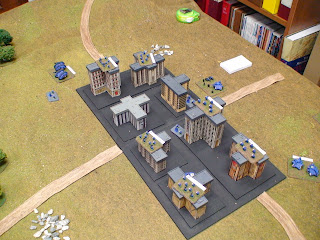 The remainder of the Space Marine Land Raiders, Predators MBT, and Whirlwind Missile Launchers, were in a mobile reserve location. 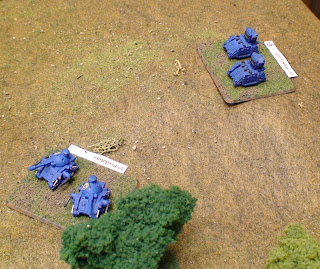 Turn 1 (4 hours in real time) saw the Eldar press forward in an attempt to the clear the woods and ridges of the first line of Space Marine defenders.

Eldar off-board artillery fell quickly on a Terminator company hunkered down in Shilan, but had no visible affect. 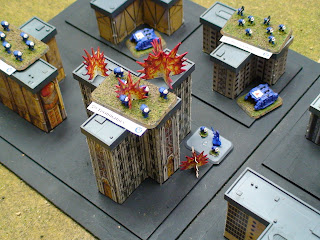 On the Space Marine right flank the Eldar moved their Fire Dragons forward supported by a regiment of Guardians. In the center the Striking Scorpions quickly moved (triple move) to attack the lone Tactical Marine company holding the center woods. On the Marine left flank the Exarches jumped all over the Marine Assault companies located in the woods (Class II).

Guardians advance in their Falcon Grav Tanks, but wait for Exarches to clear the woods of Space Marine Assault companies. 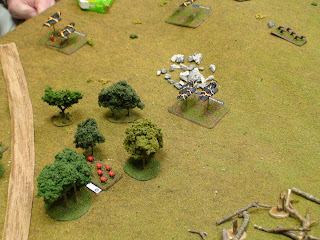 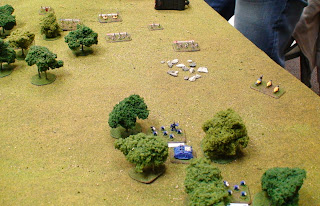 With a triple move, the Striking Scorpions launch an assault against the lone Tactical marine company in the center woods. 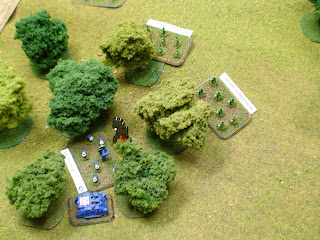 The Tactical Marines in the center repulse the Striking Scorpions! Litko smoke marker indicates suppression, while the mini-blast markers indicate Unit Integrety hits. The command stand has one to indicate a need for survival check 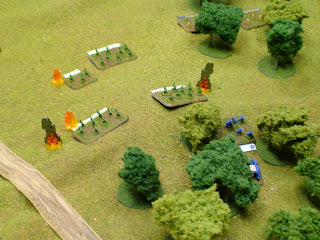 The Space Marines, through in a company of Land Raiders to defend the right flank and it blew the Eldar recon to peices. 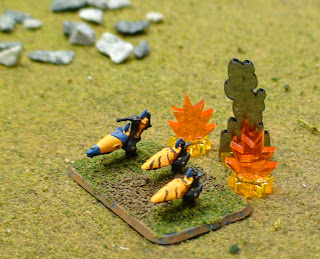 Next, the Marines focused on the Eldar Fire Dragons on the right flank and forced them to retreat. 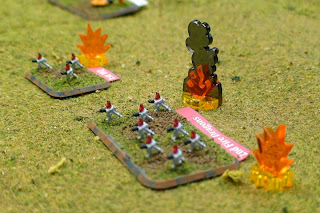 Overall view of the Eldar attack 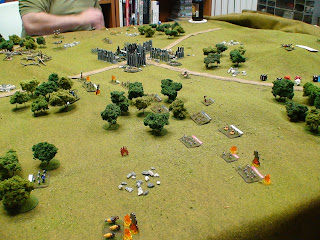 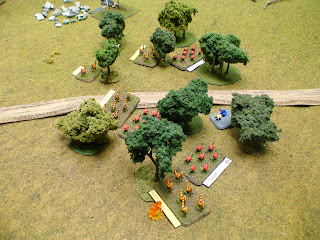 The Ultramarine Assault regiment is being overwhelmed. Their commander decides to fall back to the relative safety of the city 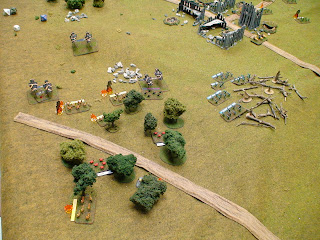 Near the end of the first turn the Space Marines deployed a air-delivered anti-personnel mine field on the right flank in front of their position in the woods, and dropped a Medium barrage (off-board support) which just missed a massed Swooping Hawk regiment. (I think my Forward Observer was sniffing glue when he gave the off-board artillery the coordinates, as I rolled my second 1 on a D12 for barrage drift!) So instead of my barrage hitting EVERY Swooping Hawk unit, it only landed on one, then preceded to do NO damage to them. 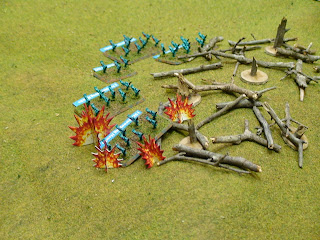 At this point the Eldar are closer to their assault on Shilan on the Space Marine left flank, but are still trying to clear out the Tactical Marines on the right flank. This was the end of turn 1.