Upon landing in WIE LUNG HOO the French sent out officer delegations to scour the city for a local guide who is familiar with KANSU WO INLET and night navigation. By noon, a local guide was found for this operation. New orders set off immediately for PORT YOAN where quickly given. PORT YOAN was a once prosperous Chinese port still much used by trading Junks and craft from all over Asia. It has been put out of a lot of its business by the Western built town at WIE LUNG HOO and the residents are resentful of westerners. Its docks still build Junks in the old style and most of the traditional Chinese Merchants who have not moved to western ways, still use the port. The Port is also still the ‘official’ base of the Chinese navy in the area, despite its shallow water. Government owned naval junks operate from the Port of customs and other duties.


The plan was for this flotilla to lay off the coast out of sight of port and the Imperial Chinese that guarded it until darkness and then slip past this once proud Imperial Chinese naval port and rescue the nuns under the cover of night. The key was to get in and out of the KANSU WO INLET without making contact with the enemy.

As the combined fleet moves east of GANSAW BAY the Russian gunboat Prince Vladislov seems to stop moving. The captain of the gunboat declares engine trouble and will not be able to continue on the trip. The expedition continues on minus a valuable gunboat.

Back near WIE LUNG HOO the German and United States forces trudged down the railway line. As the 3rd US Cavalry lead the way for the lengthy column of US Army and the German East Asian Brigade, it encountered several places in the railroad where the tracks were torn up by local Boxers. The closer they got to SI-LIAN, the more tracks that were found destroyed. No wonder there weren’t any railway cars in WIE LUNG HOO. SI-LIAN is a western built town which houses the railway workshops for the new German Ost Asia Railway. It also has a Lutheran mission run by Germans. The farming areas around it are run by the farmers of WENPO. The residents of SI-LIAN are mostly Chinese employed to help run or keep the railway running. The buildings are mostly of wood, to German design and are considered a showpiece of teaching the Chinese the benefits of living in the western manner.

Cresting a small rise nearly 1000 yards from SI-LIAN and the Lutheran Mission the 3rd Cavalry scouts saw large masses of Yellow Banner Boxers besieging the Lutheran Mission around 3PM. The thunder of muskets and the return fire of German Mauser could be heard at a rapid rate. The cavalry returned to the main column to inform General Hal “Mad Dog” Hood about the situation. 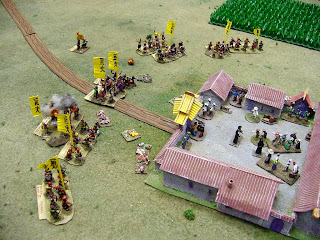 Not wanting the Lutheran Mission to succumb to the Boxer General Hood orders his forces into attack positions. The Germans at the rear of this column had to force march into position in order to make it there in time as General Hood wouldn’t wait any longer than necessary before launching the attack. By 4PM the Americans and Germans attacked. The Boxers were completely taken by surprise and out-classed in both weapons and training. The US and German forces, backed by modern artillery (77mm Krupp guns and 3” Light field guns), thundered down onto the unsuspecting Boxers. The Yellow Banner Boxers were utterly routed, with over 2000 corpses littering the field. Casualties were minor on the Allied side with less than 25 dead and wounded. Cheers rose from the Lutheran Mission as the missionaries and their local Chinese allies came out from behind stout bullet riddled walls of the compound.
Some shots of the Battle of Si-Lian: 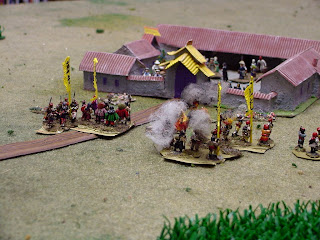 Germans deal out the carnage! 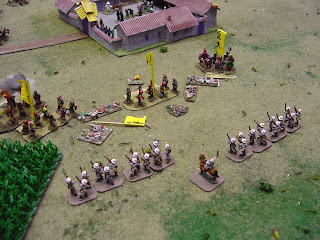 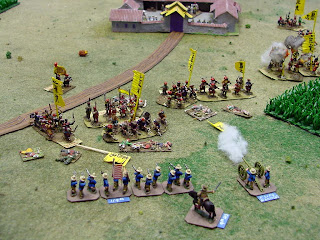 The Boxer dead were stacked and burned, while the allied dead and wounded were moved into the mission for proper burial and care. The Germans and American forces proceeded to secure SI-LIAN and the railway yards were intact. The Americans found it unusual to see German style buildings and China. They also enjoy some of the local German beer! Being the first engagement with the Boxer, both the Germans and Americans were rather trigger happy and expended quite a lot of ammunition in the battle. They will need to be more careful in the future.


The Germans were tired after the cross-country trek, the forced march into battle, and the subsequent fighting. The US and American commanders thought it would be a good idea to rest the troops tomorrow rather than push them to exhaustion.

While the Germans and Americans camped in SI-LIAN, the Russians, French, and Italians rested in WENPO. Neither command knowing what the other was going to do on the morrow, but still having complete confidence in their superiority to the Chinese way of war.

Onward and upward for the International forces!
Posted by Eric Burgess at 7:53 PM