Boxer Rebellion Campaign
1900 - 1901
by Eric Burgess
Fought from August 2005 to January 2007 in Charlotte North Carolina.
This is a cooperative\competitive campaing game, where the players are all members of  the Allied Internation Relief force composing German, USA, Italian, Russian, and French contingents, while the umpire controls the Imperial Chinese and Boxers. The allies have some objectives that are the same, but many secondary objectives that are not. They also have limitations and restrictions that other commanders will be unaware of. Here is a list of the players and their commands:

This campaign is inspired by Mal Wright, who is a great friend and excellent terrain maker, modeller, and game master. I will be using his map and provincial write-up for the fictional Queng Lui Province for the game background, with additional updates and modifications made by the umpire. I will also be using a great deal of buildings, terrain, and ships that Mal has created over the years and will finally be put into service here in Charlotte. 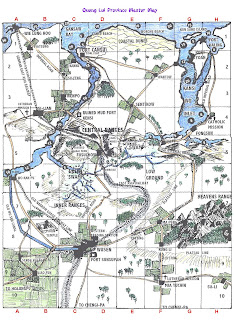 Rules are generic for the campaign, with some rules etched in stone while others will be free flowing. The campaign is designed to be short in duration in hopes that the campaign can be done to conclusion. Battles will be fought on the table-top using Piquet's Din of Battle Colonial rules with modifications.