DAY1 - The Landing and the Catholic Mission

[Probably a good idea to keep the campaign map open in a different Window so you can switch back and forth to look at the map and the text.]

The international fleet arrived at WEI LUNG HOO and began disembarking at 6:30AM. The Americans and Russians were the first off the ships, followed by the Germans, French and Italians. Foodstuffs, ammunition, and medical supplies were unloaded and put into wagons for the operations into China.

US and Russians Landing in WEI LUNG HOO: 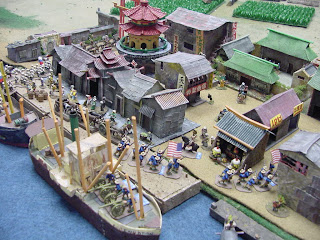 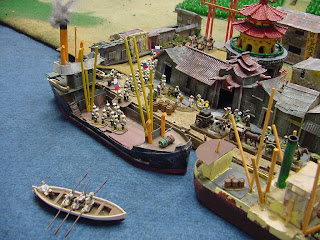 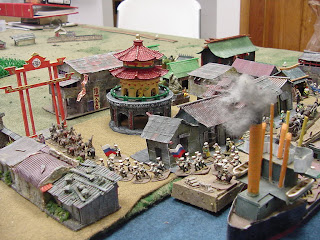 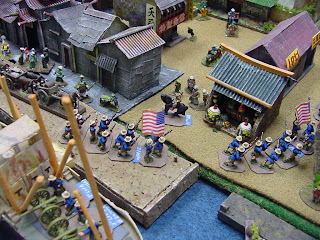 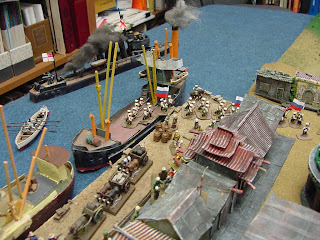 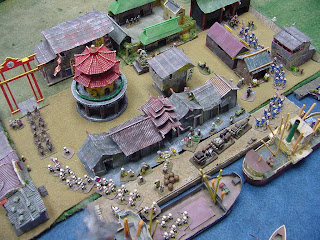 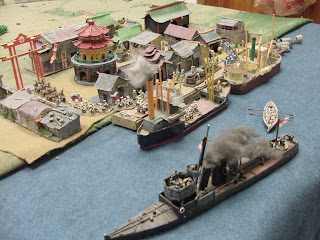 WEI LUNG HOO is a seaport of recent construction, built by Western Traders. It has docks to handle several steam ships and the buildings are mostly of western style, with some Chinese Merchant buildings as well. The arrival of the international forces did cause some crowds to assemble to watch the proceedings, but little excitement was generated from this “invasion”.

The Americans immediately sent their 3rd Cavalry regiment on patrol in the areas surrounding WEI LUNG HOO, while the rest of the contingent disembarked. They scouted to the south along the German East Asian Railway line and down the Imperial Road to PIATSUNG. The railway and the town were clear of hostile Boxer forces and the 3rd US Cavalry returned to their position of screening the US & German column that was marching down the German East Asian Railway.

Because of a desire for a rapid rate of march the Germans and Americans left their supply wagons (ammunition and food), along with a battery of US guns and 2 battalions of German Marines (Seebatallion), in WEI LUNG HOO so they could make better time going down the railway line. The German hope that there would be railroad cars waiting in WEI LUNG HOO to take them south was quickly dashed when they landed and found the railroad yard empty, but undamaged. The German and US supply wagons would make their way down the Imperial Road when summoned by their commanders. The soldiers had ammunition and food on their persons to sustain them for about two days.

Meanwhile, the Russians waited for the French and Italians to unload completely before heading off down the Imperial Road. The Amur Cossacks were sent ahead of the column to scout for Boxer activity or hostile Imperial Chinese forces. They reached the previously cleared village of PIATSUNG. Originally a farming village it is now a tin shanty town housing workers for the docks in the western controlled town. It was originally a town with mud walls but these have fallen into disrepair and only cover some sections of the village.

The Amur Cossacks, the lust for battle being up after breaking into the vodka stores on the ships, took it upon themselves to teach the Chinese a lesson in Cossack Warfare and PIATSUNG was their unfortunate victim. They proceed to burn several of the dilapidated houses and executed about a dozen Chinese who attempted to put up resistance as an example to all Chinese that resisted their advance. 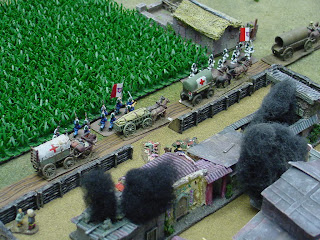 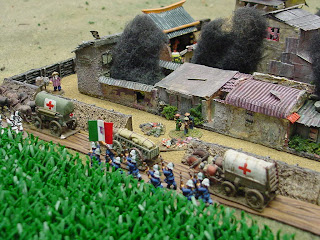 General Boris Konnellovski upon seeing the smoke rising from PIATSUNG and hearing of the barbarity of the Amur Cossacks, flew into a rage which meant there would be hell to pay for those drunken Cossacks. The wrath of the general would be seen in the morning. The Amur Cossacks, worthless in their current state, were ordered to the rear of the allied column.

The rest of the march by the Russian, French, and Italian forces to WENPO was uneventful, although the Russian troops leading the column outpaced their allies causing the column to become broken and arrived an hour or two ahead of the French and Italians. WENPO is a prosperous walled Chinese farming town which supplies the larger nearby town of SI-LIAN and the western town at WIE LUNG HOO. Originally a poor village its prosperity has increased greatly since the arrival of western traders. Its farms are mostly wealthy and it is considered more loyal to the westerners than the Chinese Government. The rear of the column finally arrived around 8PM and camp was made outside the town’s sturdy walls.

During the morning of unloading the French, concerned with the welfare of the nuns at the Catholic Mission (H4) near FONGSUN, decided to assemble a Catholic Mission Task Force. This French lead mission to rescue the nuns and westerners at the Catholic Mission included the French 1/11th Marines & 1st Annamite-Tonkinese Regiment loaded on the Gurbett Troop transport, and escorted by the Russian Gunboat Prince Vladistov, Japanese ships Tone, Sendai, and Shirataka. The HMS Kangaroo would also provide protection around the mouth to the KANSU WO INLET. The two battalions embarked on the Gurbett carried extra food stuffs and ammunition for this operation. 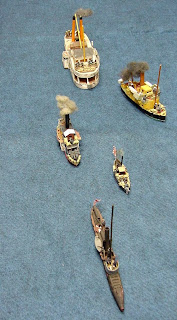 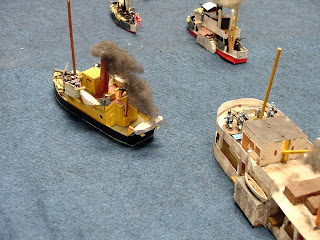 Part 4 will be the Battle of Si-Lian (Boxers vs. Germans and USA)
Posted by Eric Burgess at 4:18 PM

Really enjoy looking at this table!

Thanks Christopher! This was fun, because it was the first time I "staged" photos for a campaign. Add some nice "eye candy" to the story line.

This game looks great and a load of fun.

Well done. I enjoy the effort put into it very much.

Thank you! Labor of love as you know.

Who make this black destroyer ship? Its looks amazing!

Fjodin, the ship is made by master shipwright, Mal Wright. It is one of a kind. Literally.