DAY 5 of the campaign saw the International forces arrive at Wusen. They were greeted by a very large Chinese Imperial army deployed before the city.

The objective of the campaign can be just seen at the end of the board near Mark's hand. The Western Trading Station which had been besieged by Boxers for several weeks. USMC and Royal Marines were currently defending the compound from Boxer attacks, but their ammo, food, and stamina were running low.

The International Relief forces have finally arrived, but need to sweep away the Imperials before they can get to the Western Trading Station. I didn't take a lot of pictures during this battle, so there may be some gaps in the story. 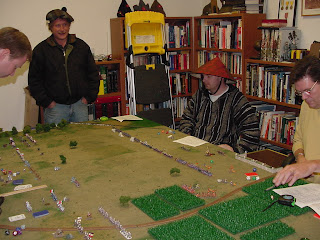 Thousands of Chinese deployed and ready for battle. They even brought a gatling gun (middle right of photos) to the fray. 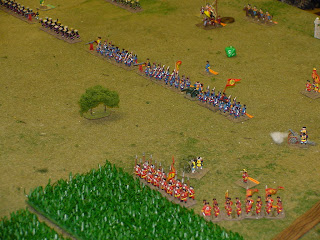 Germans launch an attack through the fields to drive out the Imperials (in red). These imperial chinese only have spears, bows, etc and didn't put up much of a fight before they began to retreat. 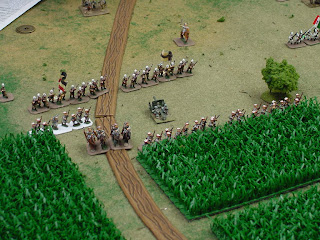 US gun batteries open up on the Chinese lines! 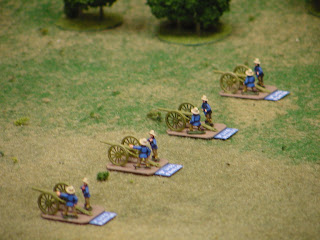 Italians, still thirsting for glory charge headlong into the Chinese only to be chewed up by the Gatling Gun! (one of the few good things that happened for the Chinese) 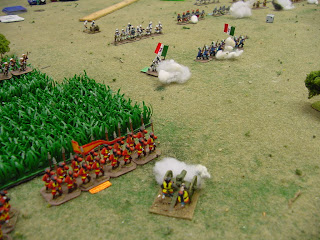 Russians, as they have done the entire campaign, advance on the Chinese and their firepower overwhelms the Chinese. The Chinese, completely outclassed, are forced to retire from the field. 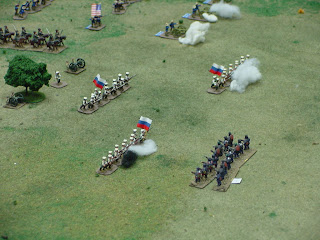 ﻿Next post will be the Battle of the Western Trading Station. This was a brutal battle with lots of hand-to-hand combat throughout the streets of Wusen.
Posted by Eric Burgess at 12:32 PM

I have enjoyed each and every one of these magnificent battle reporst.

Thanks Bob! There are 3 more coming! Very touch and go for the Internationalists in some of them.