Here are some photos of the setup for my large Boxer Rebellion game using Din of Battle 2nd edition.

This is part one of a five part series of photos.


The Boxer Rebellion is in full flame with outright assistance from the Imperial Chinese government. The Boxer's attacks against Internationalist interests have destroyed both good, property, and the local European cache of gin! This cannot be tolerated.

The forces of Britain, France, Russia, Italy, and United States have decided to rid this den of iniquity once and for all, while showing the Dragon Throne its proper place supplicated at the foot of the royal thrones of Europe!

Two by Land and Two by Sea!

In order to put a stranglehold around these Boxers and cut them to the bone, the operation will begin before dawn with a simultaneous assault from four directions. One brigade of US and Italians will storm the walls of the city from the north, while one brigade of British and Russians will storm the city from the south. Two naval landing parties of French Marines, French Zouaves, French Sailors, USMC, German Marines, and Italian Regina Navali will blast their way into the harbor.

Rule #1 – Special Boxer Morale
Boxers start the game as fanatics, meaning they don't take morale checks until 50% stand lose for the entire banner (force). Once 50% is reached add one Confused Withdraw card to the deck each turn. When that card is turned the Boxer player must roll percentage dice and it must be higher than their current percentage of stand loses. If they fail to do so they must withdraw each time a move card is turned. No Major Morale cards in the Boxer deck. They also don't have any morale chips.

Rule #2 – Internationalist Surprise Advantage
Since the Allied Forces are using the cover of darkness to their advantage, each International command will get 3+D4 impetus to use at the beginning of the battle. During that time the Chinese may not Opp Fire. After that first free initiative, then each side will roll for initiative per these scenario rules.

Rule #4 - International Starting Hands
To allow for International "planning" each command may begin the game with X number of cards in their hand, which they pick from their sequence deck. These cards can be played any time the International player has the initiative, but once played, they cannot pull more cards to put in their hand. So you can either play from your hand or take a chance on what is in the deck.

Rule #6 - No Opp Chips as all units may fire if loaded.

Winner may choose to go first or second and each player on that side gets that many impetus. Once the first side completes their impetus use, then the enemy gets to use their impetus die roll amount.

Rule #8 - Impetus Costs
It only costs an impetus to turn cards. All units may act on a turned without paying any impetus, provided there is at least one impetus remaining. In other words, if you use your last impetus to flip a card, then you may not act on it. This is to speed the game up. It may not work like I want it to, so we may have to change this as we go along.

Great shot of the entire battlefield, including the harbor, temple, and city walls. 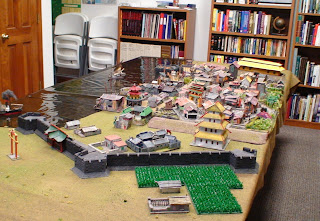 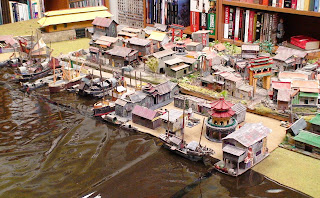 This is the wall the US and Italians need to clear. 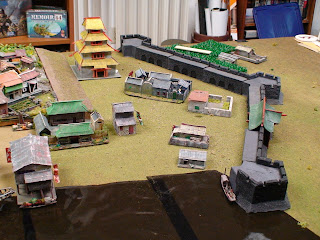 Elite Marine and Sailor units are tasked with clearing the Black Citadel! 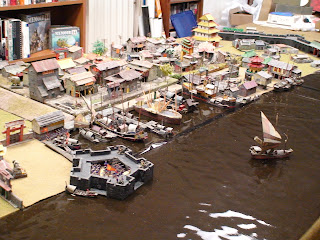 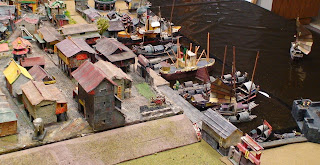 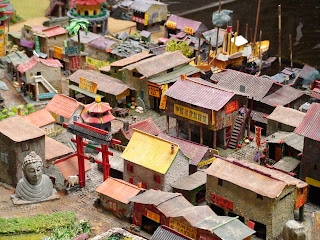 The Dragon Gates! The British and Russian commands need to clear this section of town. 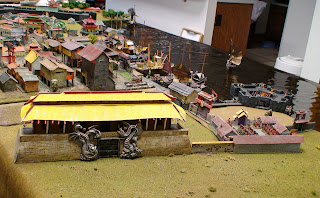 OOB and opening moves coming next. Enjoy!
Posted by Eric Burgess at 9:44 PM