This is part 4 of a 5 part series of blog posts on the Dawn Raid 15mm Boxer Rebellion game we played a couple months back. Please use the labels to find all the previous posts on Dawn Raid.

Here is a good shot of the centery of the city where all the Boxers are hiding. (oops, you weren't suppose to know that!) 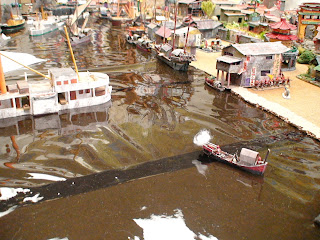 USMC landing party gets hammered by the fortress guns causing casualties and forcing them to wade onto the rocky shoreline. 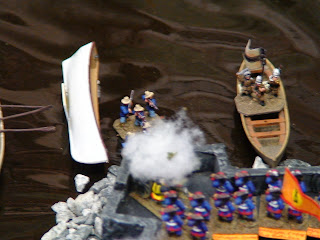 Good view of the raging battle around the Black Citadel! 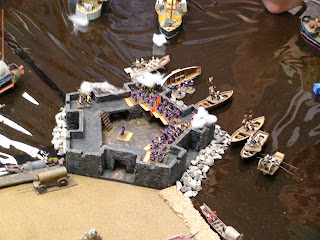 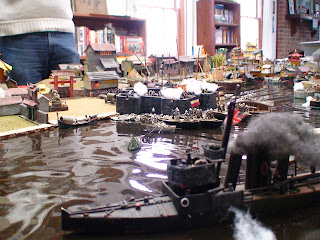 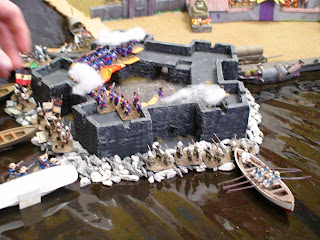 Meanwheil the Russians continue to push on the barracks. 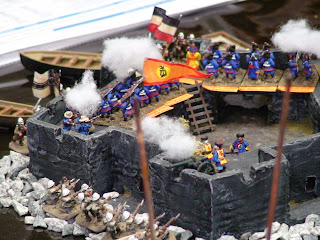 The Chinese War Junk sets sail and uses its cannons to rake the Royal Marines on sure, and take shots at the Austrian gunboat Vorwarts 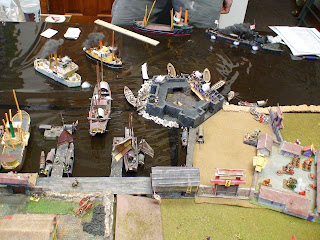 Great overview of the battle on this side of the table. Black Citedal nearly captured. Dragon Gate taken. Barracks being overrun by Russians. 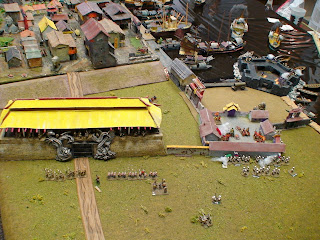 The USA and Italian command is also having some success. They have managed to put 3 battalions over the walls, and Chinese forces can be seen rushing to the gate. Russians, now in the barrack's buildings are being shot at point-blank by the Chinese artillery and gatling gun! 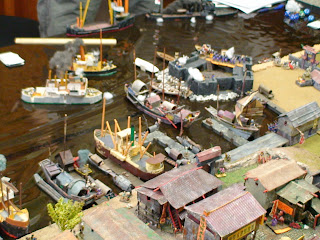 Regina Navali land and knock out the harbor patrol sampan and then begin to cut-off the Chinese forces still fighting in the citadel. USMC silence the last Krupp guns in the Black Citadel with hand-to-hand combat. 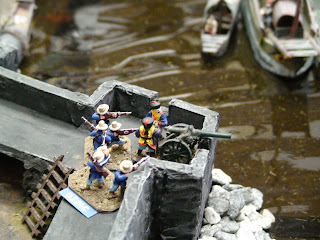 French paddlewheeler drops the French Marines and Sailors off down near the large market, only to be ambushed by waiting Western Trained Chinese forces. You can see the Chinese Magazine in the bottom right of this photo. Hard fighting on the other walls. US and Italians secure the walls, but take some pretty heavy casualties. 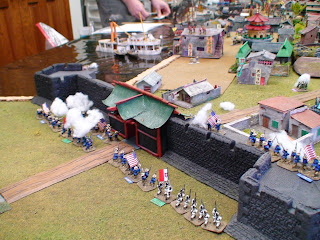 The Black Citadel is cleared of Chinese and Gun Master Chang surrenders. 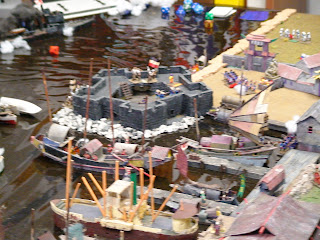 Next post will have the scrum with the Boxers and the massive fighting around the Chinese Ammo Depot.
Enjoy!﻿
Posted by Eric Burgess at 11:26 AM

Will you stop putting us all wargamers to shame

I was hoping for "inspiration" rather than "shame".

oh, you will also not like the eye candy in part 5 then.

Eric your terrain always makes me green with envy and fills me with inspiration make mine just as good as yours.

There's more! You are just being cruel now:-)