This blog post is part 2 of 5 for the Dawn Raid Scenario featuring my 15mm Boxer Rebellion collection. See part 1 for scenario details.

Buildings and ships by the talented Mal Wright
Fortress by Eric (me)
Water: window tinting from Lowes. 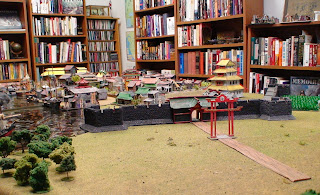 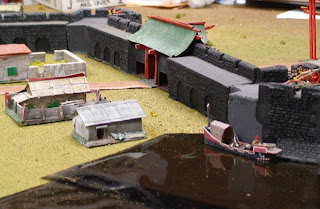 Since this is a dawn raid, the Chinese are mostly in their barracks. Three gun sections, and 2 battalions of Imperial Chinese infantry are in the black fortress. 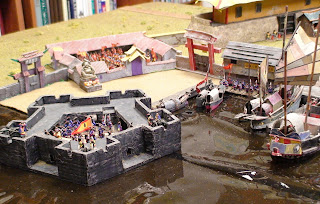 Nice view of the harbor. The allied Naval Commander (Eric Cottrell) will be assaulting the black fortress via long boats. Gutsy move! 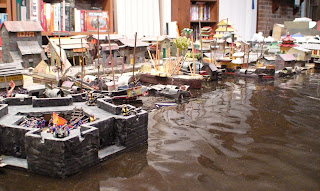 Even before dawn the harbor is clogged with ships and goods. 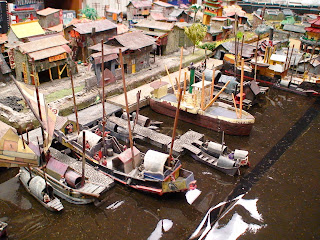 The DRAGON GATE is a symbol of power to all visitors. The Russians and British command will be assaulting from this direction. 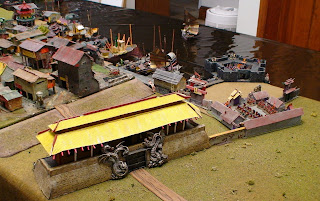 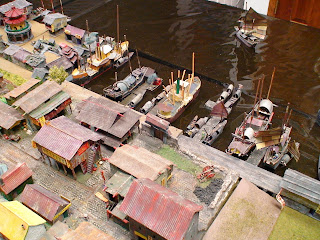 here you can see the market and shops of the wharf area. 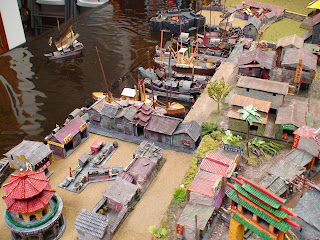 More photos to come, plus OOB.
Eric﻿
Posted by Eric Burgess at 10:02 AM

That looks a great set up. The harbour is wonderfull and that star fort!! :-)
Cheers
Paul

Thanks Paul, I made the fort based on some plans from an old issue of the Courier.

The Dragon Gate looks excellent! Is that scratch-built as well?

Hi Stuart, yes the Dragon Gate is scratch built with Dragons bought from a local Asian store and glued onto the structure.