This is part 1 of a 3 part teaser for the 18th century siege rules I have been working on. They are a card driven ruleset (a la Piquet), and is designed to resolve seiges in a quick and fun fashion.  I hope these posts will spark some interesting discussions. Coehorn's War was the original title, but I have since switched it to Vauban's Wars.

Background
Sebastien LePrestre de Vauban is probably the most famous siege engineer of all time. He is probably best known for his star-shaped fortress designs, but his most notable contribution was in the techniques he used to capture a fortress. Vauban advocated the following steps (greatly simplified):

1) Isolate the fortress quickly and completely. Do not let the garrison increase its stockpiles of food, ammunition, troops, and supplies. Trenches are dug surrounding the fortress and facing both inward and outward (Lines of Contravallation and Circumvallation).

3) Plan the siege carefully and completely, including the location of all batteries and parallels.

4) Once the siege begins, the digging should continue day and night. The first parallel should threaten multiple points of the fortress.


5) The approaches, or saps, should never present the defender with an enfilade. Enfilade fire at long range is even more dangerous than at short range due to the falling effect of the ball. The second parallel serves as the starting point for attacks on the ditch and will also contain the siege artillery’s emplacements. The second parallel would be dug from 300 to 400 yards from the counterscarp which would be immediately in front of the walls or bastions.
6) The most difficult part of the siege is often the assault on the ditch, which would frequently result in the greatest loss of life to the attackers. Not only would the attackers be required to drive the defenders from their entrenchments, but were required to hold their positions until the sappers could dig suitable protection for them. Vauban often decried foolish or ill prepared assaults and the needless slaughter they produced.
7) The third parallel should be built immediately in front of or upon the glacis. This is where the final assault on the breach will begin. Cannon would be brought forward both to assist in finishing the breach and sweeping it clean of defenders.


Playtest Shots from August 2010
Note: please pardon my "in flux" painting and assembling of the terrain and figures. Just in the infant stages of this collection.

The siege starts with the entire 1st parallel constructed. Both sides purchase their troops to begin the siege, so there is some flexbility to everybody's strategy. 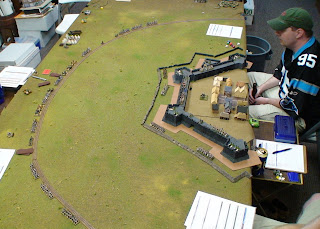 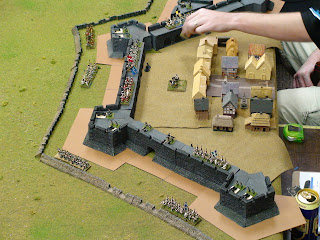 General and supplies are important to any siege. 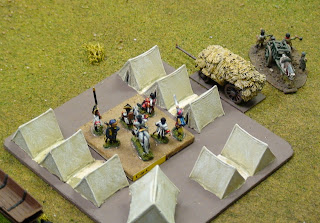 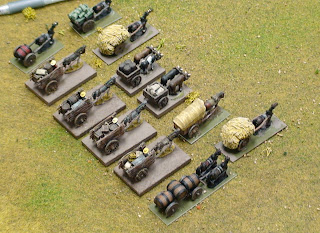 What can be purchased for each army at the beginning of the game?
Photo below shows the initial saps and the first trenches of the 2nd parallel being built. 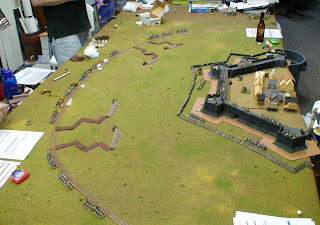 The defender needs sappers (they are the black primed figures on the bastion) to repair damage done by the enemy siege guns. 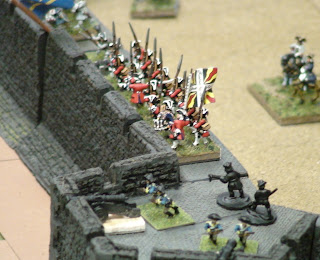 This shows more of the second parallel being built. The besieger will need to move their guns forward so they can inflict more damage on the fortress walls. 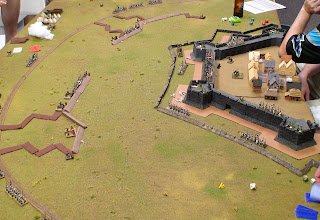 Take a close look at the bottom of the bastion walls, as the rocks mark the number of hits on the wall section. The goal of any bombardment is to breach  one or more sections of the wall in order to storm the fortress. 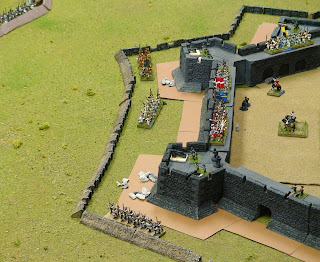 Siege Pre-game Setup Overview
This is a brief outline of the order of setup for Vauban's Wars. Details for each step will be discussed in follow-up sections.


Nice shot of the sapper working their way towards the fortress in order to create the 3rd parallel. 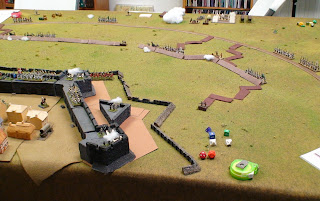 View from the besiged fortress. It is disconserting at the defeater to see the investment of your fortress and the walls crumbling around you. 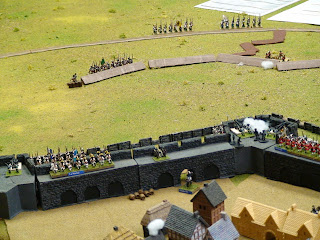 Sapper (single stand unit) moving down the sap towards the fortress. 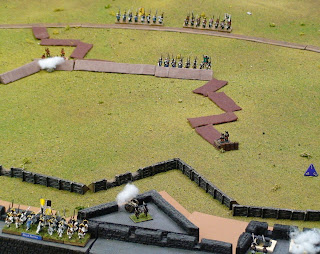 Final shot of the artillery being moved into the 2nd parallel to smash the fortress. 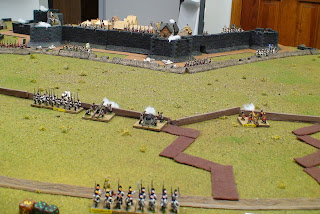 This looks very interesting! I've linked to iit on my blog and await part 2 with interest.

Not a type of tabletop battle I ever considered playable (as most seiges run to weeks/months) but your system does look interesting.

Hi Sgt, yes, that is the whole point of the rules. To make a siege interesting (filled with decision points), quick (over in an evening), and fun!