A key to a good siege game is to make it fairly quick and interesting. Although in real life, a siege could take months, gamers don't have this kind of time or attention span!

Since the game starts with the first parallel completely built, players can get right into the bombard of the fortress and start work on mines or saps.

Turn Length in VW
Depending on the situation, sieges take between 5 and 20 Siege Turns, with several Sortie or Assault Turns in between.

Due to the typical lengths of sieges, Vauaban’s Wars is fought with two different time scales.
A Siege Turn may end in one of several ways: one side goes through their Siege Deck (the opposing player is allowed to use their remaining impetus if they have any), due to a Weather Check result (in which case play immediate stops for the Siege Turn, even if the other side has impetus remaining), or lastly a turn can end on the second tie impetus die roll.

How does a VW game end?
There are several ways to be victorious during a siege and have the King’s banner raised above the ramparts.
Besieger Wins if …
 Garrison’s Morale Chips reach zero during an assault, and Besieger is inside the fortress walls.
 Garrison’s Siege Morale Chips reach zero and besieger has a breach. The garrison will surrender.
 Garrison’s Powder Supply reaches zero and a new breach is made.
 Garrison’s Food Supply reaches zero, and Popular Support fails.
 Garrison player accepts Honors of War only in a campaign setting. A commander (besieger or garrison) can “beat the chamade” in order to parley and offer terms of surrender of the garrison:
o Unconditional Surrender
o Parole: Garrison surrenders their arms, but keeps their colors and must never fight in that theatre
during the rest of the war.
o Honors of War: Garrison surrenders with their arms, colors, and food. The besieger can decide if
they can take their artillery also. (no mortars or fortress guns).
o Generous terms: Honors of War plus baggage.

Here are some photos of my second large playtest in September of 2010.

Siege has moved right along with a second parallel being built extremely close to the fort's glacis. 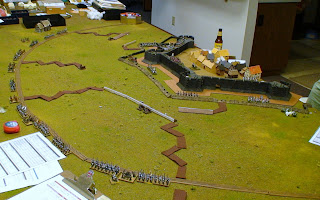 Here we can see the besiegers have brought up a Siege gun and large mortar to firebomb the city. 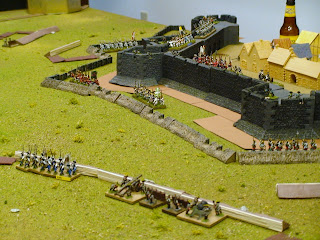 The defenders attempted to create a counter sap to halt the enemy sappers, but the defender's sappers were shot down by the besiegers. 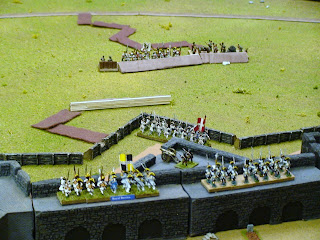 Love this sapper figure from Hallmark. They make some of the coolest sappers for this period. 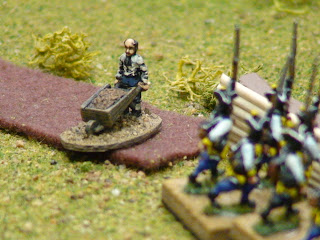 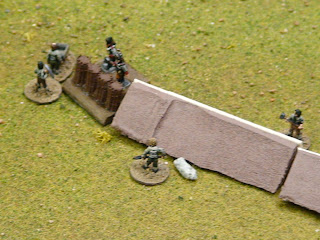 This is a real nice shot of the besieger's siege lines.

Sappers are making gun emplacements so that the big guns can be moved forward to devastate the bastions. 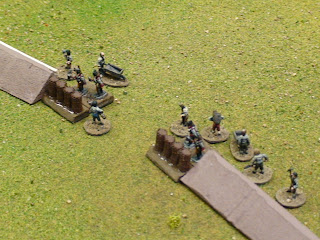 In part 3 I will discuss several other key rules and topics, along with the photos from the last playtest.
Eric
Posted by Eric Burgess at 5:29 PM

This looks fantastic! I've played a little TOW, but have always fancied having a go at a proper siege.

Thanks Conrad! It has actually been a lot of fun to play.

Fantastic! Reminds me -with simpler rules- of the 'Siege of Dendermonde' series published in 'Battles for Wargamers' in -I fear- 1976... (nostalgia!).

I have always wondered about a detail -without impact on wargaming, sheer curiosity: how were the heavy siege guns and mortars progressively pushed forward from parallel to parallel to, finally, the breaching batteries 'crowning' the ditch? They could certainly not follow the zig-zag approach trenches, so it had to be done 'in the open', certainly under night cover (new batteries were often referred to as 'Being ready to shoot at dawn'): were the pieces manhandled or animal-drawn? How do they cross the existing parallels?

Looking eagerly forward to the next instalement!

As with many things in Piquet rules, the gun movement is abstracted, as gamers don't want to deal with how something got somewhere, and whether it happened at night. The sequence deck of cards has cards that allow you to reposition your batteries. Each turn is a week, so it would be assumed that the batteries were moved when they were in the least amount of danger.

I will be able to post #3 this weekend as I'm on vacation.