In this post I will cover some of the critical items when conducting a siege: powder supply, food and water, popular support, security, espionage, spies, coups de main, and weather. 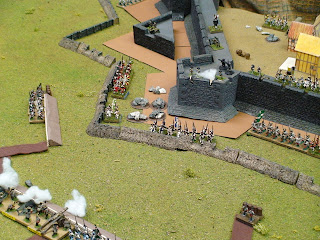 Powder Supply
Fortresses and armies can be stocked with up to 10 weeks supply of powder. This was extremely rare. Armies generally carried two to three weeks supply with them and relied on conservation and re-supply to enable them to continue a siege. Fortresses were often left very low on powder by corrupt governors, incompetence, mismanagement, or greedy field armies. Stocking magazines was a constant source of worry in every army, and it took the genius of a Marlborough to make the supply situation in any way adequate. English and Dutch armies were generally fed and supplied regularly. All other armies basically starved for bread and powder.

Powder Supply can be predetermined by the umpire or scenario designer, or each player can secretly roll a D4+2 and that is the amount of Powder they have for the siege. Each player writes this value down on their Information Sheet. The number of reloads used during a turn dictates the chance of using up a week’s worth of Powder Supply. The more you fire the greater the chance you have of burning through your powder supply.
Player's don't know when there is a Powder Check as there is a card put in their sequence decks for this event. Players can use spies to investigate how much powder the besieging or besieged army has left. Player's have a "Supply Die" that is used as a counter roll to the amount of powder expended to see if they lose powder. 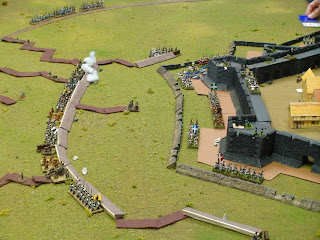 Food and Water
A fortress could not hold out indefinitely against a determined attacker if the besieger could isolate the fortress from re-supply. Well-stocked fortresses with determined governors could often hold out for six months or more. Governors who were looking for a quick exit from the trauma of a siege could often find an excuse to surrender by citing a lack of supplies. (Which probably meant that they couldn’t get fresh quail for their table and their claret was an inferior year!) 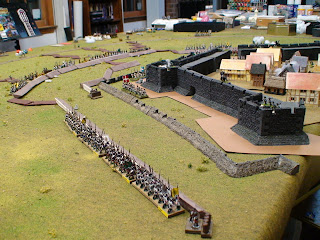 Popular Support
Living in an early 18th Century city wasn’t exactly an ideal lifestyle in normal circumstances, but when an army showed up outside of a city, cut it off from trade, food, and the outside world, then did nasty things like break down the walls, shoot cannonballs through the windows, and keep everyone awake at night, so you can’t expect the common folks to not be upset. Adding to the exasperation was the attitude of the city’s governor who refused to surrender at the first opportunity. What is a mayor to do?

Popular support is measured in terms of a Popular Support Die type. A population that is generally supportive of the governor and willing to aid in the defense is a D4. A generally indifferent population is a D6. A city with a lot of discontent is a D8. A city that is openly hostile to the garrison is a D10. A city that will actively help the besiegers is a D12.

A Popular Support Die can be assigned by the game master or can be rolled randomly. Popular support can change sapper recruitment, make the population respond differently to Coup de Main, and how long a city will hold out once the food runs out. 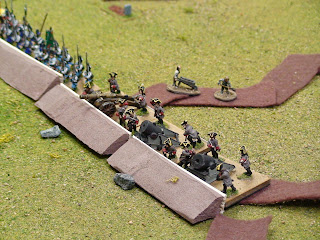 Security
An army’s or garrison’s security detail was important to keep an eye on the happy populace and prevent the enemy from spying too easily. Both the army and garrison will have a Security Die. 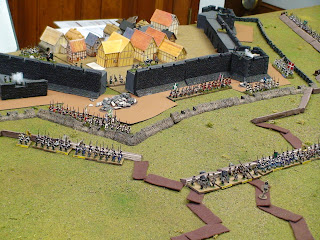 Each player may use spies to discover useful information about the opponent.  Espionage occurs on a player’s Officer Check card during a Siege Turn. Spies are bought during the purchase phase before the siege, but can also be “purchased” during a game. Spies can have different qualities.
The following types of information can be discovered by spies and must be declared as the spy’s activity before the die is rolled:
Coup de Main
Many of the fortresses in the 18th century did not fall to a lengthy siege, but to successful coups de main. “Coup de Main” is used here as a term of convenience. It generally should be described as a surprise attack by a besieging army. In Coehorn’s War it is used here to indicate an action against the garrison by part of the city’s population. Revolts in besieged cities were NOT common, but the threat or reality of a revolt was often the cause of a premature surrender. The French capture of Ghent in 1708 was one such instance.

Some Coup de Main events, with details of each in the rules:
(1) Unrest in the Streets
(2) City Militia Revolts 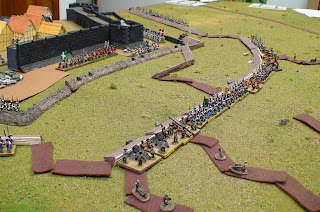 Weather
Weather was a tricky mechanic to deal with, and still keep it fun.

Weather can have a dramatic impact on sieges. Its unpredictability can force commanders to adapt to its whims. In extremes, it may even force abandonment of a siege. The campaign season was roughly from April through November, when armies went into winter quarters. Depending on where the fortress is located the definitions of the seasons may change, but use the following as a general rule.
There is a Weather Check card in the sequence deck and when it is turned the player rolls on the Weather tables depending on the season. Some weather ends a siege turn, some changes the conditions for the rest of the turn, others cause disease, while late season sieges can have weather force a player into Winter Quarters. Fun stuff! 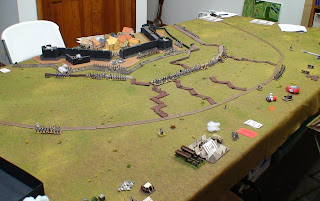 Well, that is all the blogs on Vauban's War at this time. I have a playtest group going, so I hope to finish this by mid-2011. I hope this will perk your interest in breaking out those fortifications that have been sitting in your closet for years untouched!

Great job! These rules add great flavor to the siege and really show that the fortress commander had more to worry about than a possible breach.

Thanks Castigator! Indeed, there is a LOT to make decisions about in a siege. Decisions in gaming is what makes history and fun. Maybe I will record what happens in my next playtest and do a play-by-play.

Out of curiosity -because they'll certainly not be specifically taken into account and described at the level of 'abstraction' of your rules- (but given the *title* of this series) could you please tell me about the 'Coehorn mortars'? In terms of range, and 'explosive potential' / overall efficiency as compared to, say, hand grenades on one side and light howitzer shells on the other side? Thanks in advance;

This looks fascinating and very impressive. Would love a "blow by blow" report of a battle.

@Furt - Yes, next playtest I will do a play by play.

@Abdul - Coehorn mortars are fairly week in the grand scheme of things. They can be bought on the cheap at the beginning of the game. I prefer big siege guns!

Since Coehorn was the great siege engineer, that is what the rules are named after, not his mortar. :-)

Hello and happy new year!
I've just seen the link to this on the Lace Wars group. Sounds like an interesting system. I'm looking at it with an eye to gaming the Veneto-turkish wars of the 1680s and 1710s, so have to ask how it handles fortresses on "difficult" terrain (hills, cliffs etc.)?
best regards
Aris

The rules would handle fortresses on difficult terrain. Other than rocky ground, I'm not sure why this would be a problem with regards to teh rules. Rocky ground means no mining.

I have a question. Where did you get those lovely big siege mortars from ?

The mortars came with a Pirate collection I purchased about 10 years ago. Not sure the manufacture. They are nice!